As we made our way for Calama I was starting to wonder what we were leaving behind in San Pedro. It seemed that everyone was on the road headed in that direction. It later occurred to me that it was actually Easter and everybody was going there for the long weekend. We had previously thought it had come and gone weeks earlier.
Happy to be leaving, we decided to stay a couple of nights in Calama and sort out a few things before heading to Bolivia. We were both looking forward to entering a new country after spending the past 5 months in Argentina and Chile. Calama is a large mining city and has everything you could possibly need, even sauerkraut if that is your thing? Nothing else really noteworthy about this city, this also includes our next stop, Ollague before entering Bolivia.

Ollague is a small town of 500 inhabitants and sits high on the Altiplano surrounded by mountains and the odd volcano or two. This gives the small place a scenic backdrop to an otherwise desolate landscape. For the first time in a long time we were swapping the tent for a bed in a hostal as the temperature had been decreasing at night over the past week and we were not too keen on the idea of freezing our arses off at 3600m. As we packed the following morning it was with slight hesitation. Our past five months in Argentina and Chile have been full of incredible highs all purely gained by striking landscapes and incredibly hospitable people. What had once been a far off dream to visit Patagonia had now become fulfilled, never realising how much both of these countries have to offer. We leave behind many new friends, but we have even more fond memories to take away with us. One thing is for sure, we WILL be back again.

As we entered into Bolivia we now had to get into the swing of things with the changes of customs formalities. For one, the office where you need to acquire a new temporary import is nowhere to be seen but over on the other side of the railway tracks hidden behind some carriages was the office we were looking for. Everyone was friendly though and for the first time we had to pay for our temporary imports. No problems as we were so happy to enter a new country and with three months entry for both us and the bikes.  We had been lucky enough to be asked how long we wanted by the immigration officer because as an Australian citizen I am only eligible for a 1 month visa so 3 months was a bonus!

Leading up to leaving Calama we both had our reservations as what to expect of the roads ahead of us. There are so many different reports of what the conditions of the roads were like. Thankfully since the ‘latest’ blog we had read there had been a big improvement of the roads. They were mainly unsealed but hard packed with the odd bull dust/sand sections that would keep us on our toes, one particular time catching both Sanne and I out having a bit of a moment but luckily we both managed to stay on, the roads continued on like this all the way to Uyuni.

Along the way we saw countless llama farms, many llamas dressed with colourful material hanging from their ears and some even with necklaces. On one particular occasion we stopped to check them out and take a few photos. Sanne was off to get some close ups and I was taking no notice as I was checking something on the bikes. Next thing I hear Sanne start yelling my name and to come and help her, not taking too much notice this continued until I finally look up and see Sanne being eye balled by a llama, this turned into her being chased around and around a bush with no backing off. I head over and straight away the llama now has its eye on me, I find myself backing away, quickly putting Sannes bike between myself and it but that didn’t work, now it was my time to be chased around and around, cue Benny Hill music and picture being chased by a rabid llama wanting a piece of your flesh. Finally we both stopped and I start to yell at it to go away, nope not going to work. Finally the llama got bored with us and slowly backed off and headed back to the rest of the herd. At least we were not spat on or mauled. So we high tailed it.

We were headed for Uyuni, a small town that sits on the edge of the largest salt flat in the world, Salar de Uyuni. Well, the first thoughts of Uyuni was, the salar can only be better than this. The town is a disjointed place of old and new buildings overrun by four wheel drives that take the hordes of tourists on 3 day tours around the salar. Gladly we have our own transport and I was looking very forward to getting the bike out onto the salt flats and not being crammed in the back of a 4x4.

After a couple of nights adjusting to the even colder weather and with a fellow biker in tow, we headed for the Salar. After fuelling up in town at almost triple the cost of what the locals pay we were set, except one thing, we have already noticed here in Bolivia the lack of road signs and with only poor maps, navigating could well be an issue. This is where Alex comes in, the Romanian on his overloaded little XR250 Tornado! His Spanish is pretty good so he started asking for directions after every time we turned and in no time we were headed out on a dusty old track that leads to another village before the salar. We met Alex at our hotel in town and decided we should all go out and camp on the salar the night.

Once entering the salar I noticed water still on top and numerous puddles we were going to have to navigate around, straight away I realised I should have sprayed something onto the bikes to stop the salt from sticking, luckily enough after riding all over the place we had managed to negotiate the mass of puddles and we hit solid ground, with a salt flat lying 130km’s ahead for me. First thing I thought of was old Burt Munro from New Zealand and his old Indian motorcycle he broke numerous world records on in Utah, North America. How I would have loved to be on a bike with some power and have the chance to see what it could do. I snap back out of it and realise all I need is my old Zuke, To be on two wheels here was all you need and with a big smile on my face I just enjoyed every minute of it.

There are two main islands where people go to visit, for their huge Cactus plants (some 12 metres tall) and to get a great look over the salar itself. There are even people living on one of the islands. After a quick visit to that particular one we decided to head out even further to the next, even bigger than the last but with no inhabitants. It was just the place to set up camp. We found that we had the entire place to ourselves and after setting up we headed straight for the top of the island to watch the sunset. Such a serene place, no cars, no homes, no people, no nothing. Bliss. Then the sun set and the temperature dropped fast. We cooked dinner while enjoying seeing the sky light up with stars, the last place I have experienced the sky so full of stars was back in Central Australia. The cold was starting to take its grip so we all decided to call it a very early night.

We all slept soundly to complete silence on the salar and luckily enough the temperature did not drop too far and we were all warm enough throughout the night. A hot cup of coca tea was still the order of the day when we did rise however. We packed slowly and made our way back to Uyuni stopping for numerous photos along the way including a little filming which we have not done for some time. We all enjoyed just taking it in at a slow pace and by the afternoon we were back at our hotel only to find more bikers in town. It would have been great had we taken more supplies and stayed out on the salar longer but this was only the very start of our Bolivia adventure, for now we had new places to go. 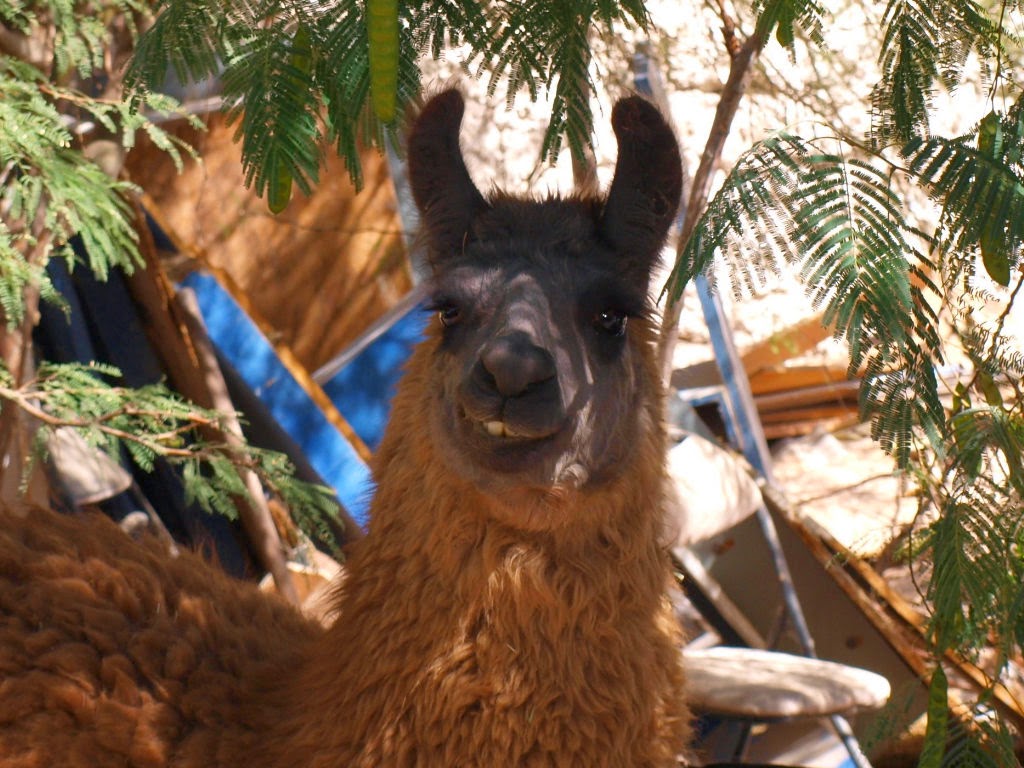 On the road from Calama to Ollague 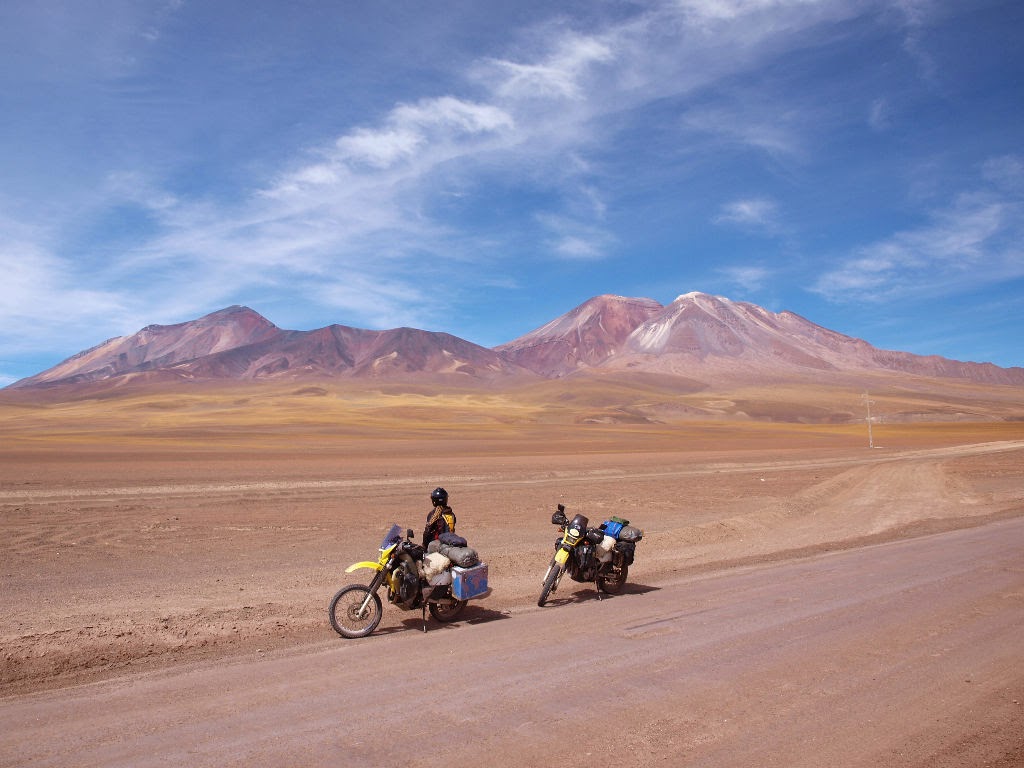 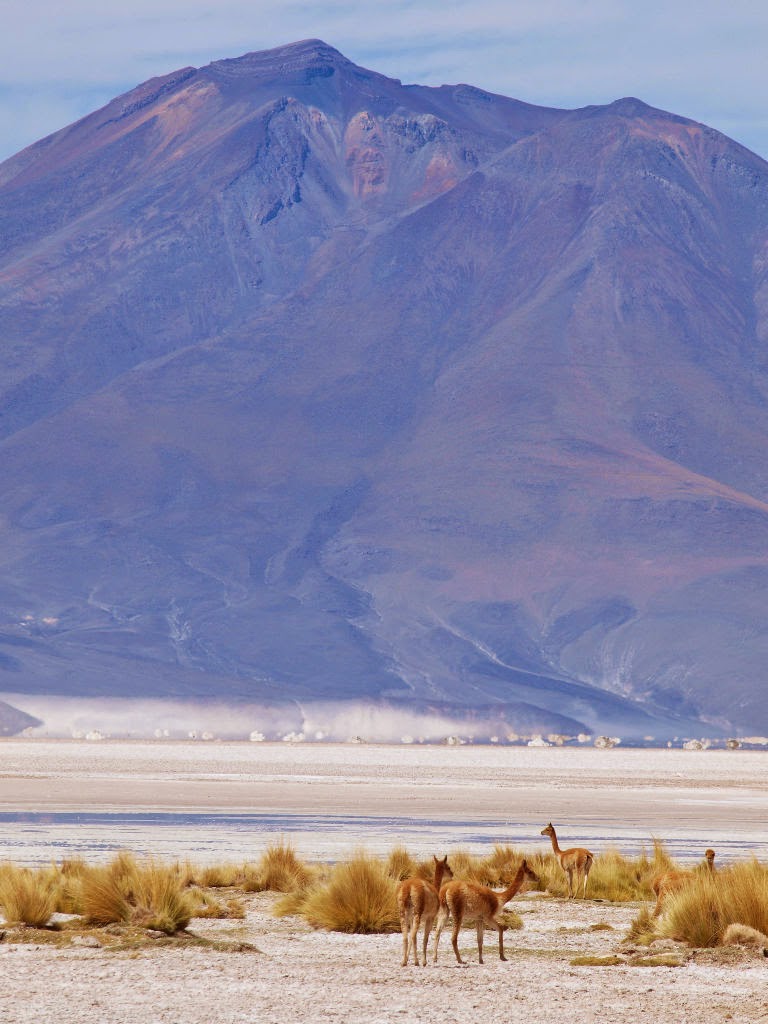 The remote bordertown of Ollague 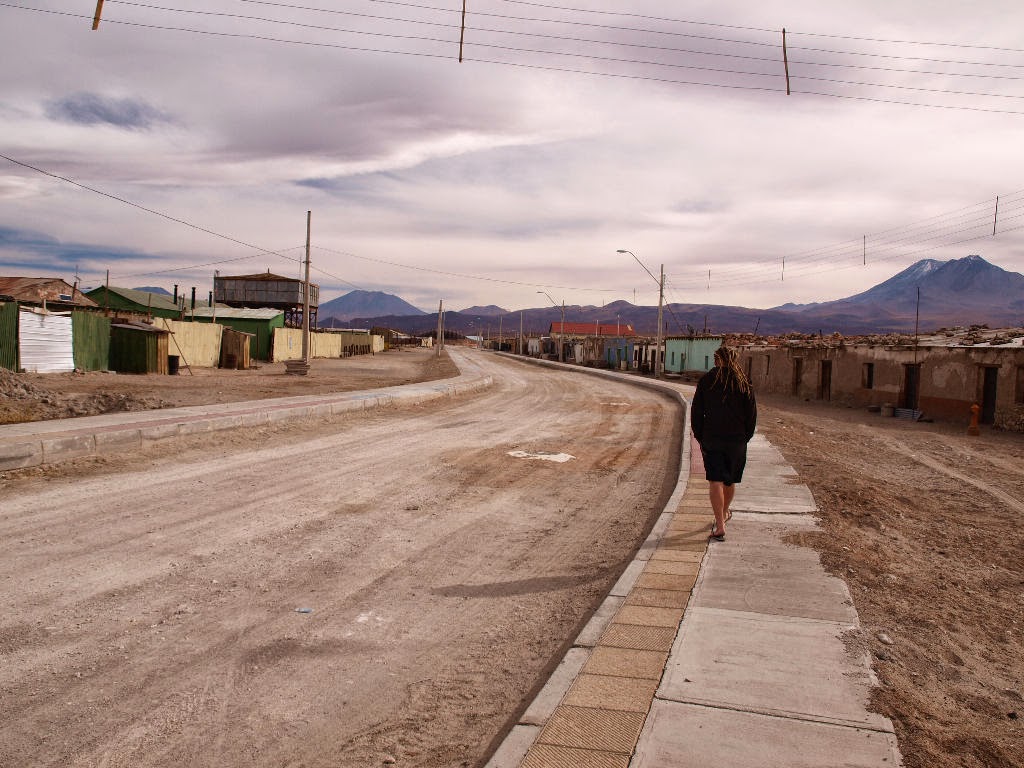 Who needs roofing nails when you have got rocks 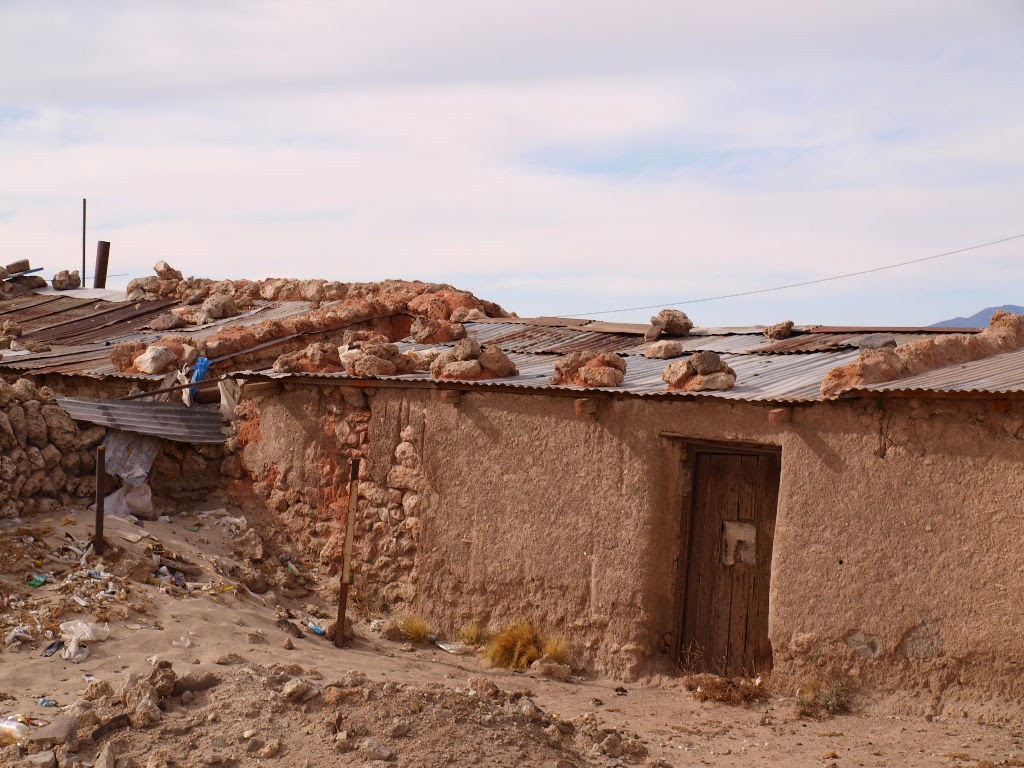 We witnessed a stunning sunset in Ollague 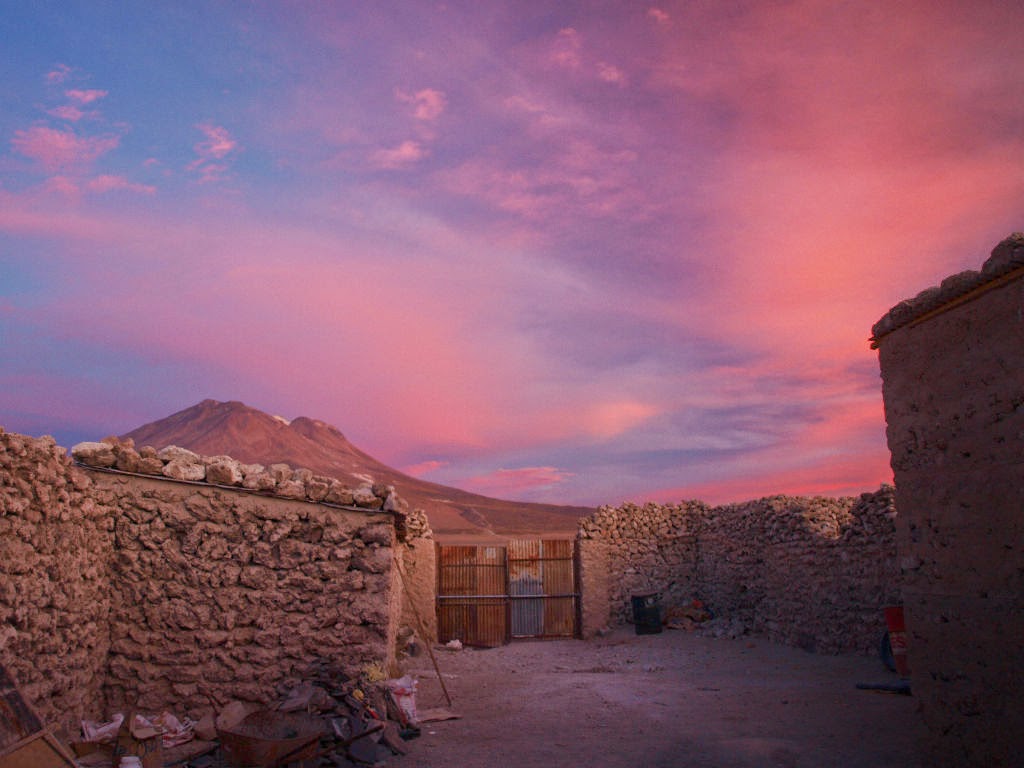 Our ´friend' the rabid lama 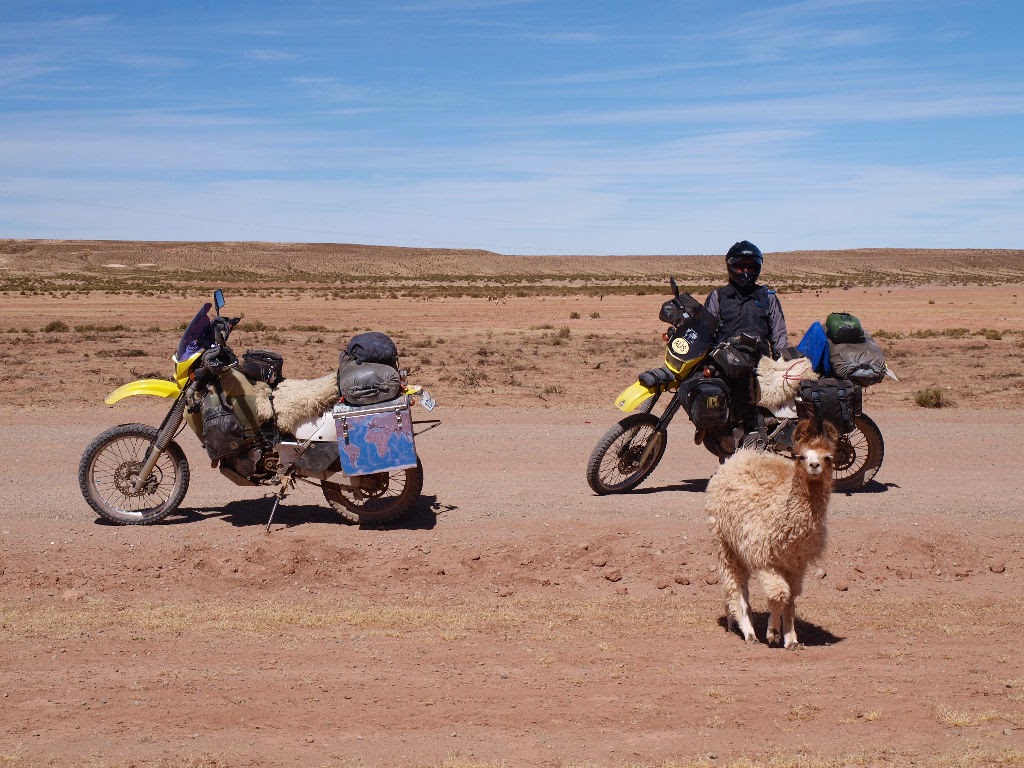 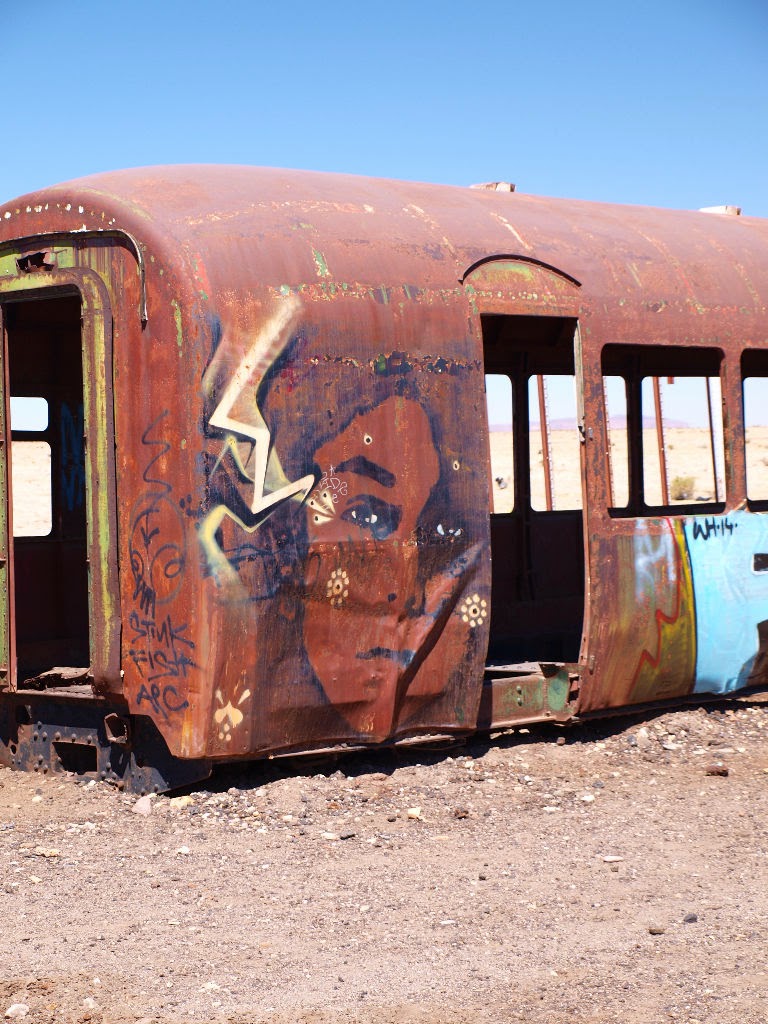 As everywhere else in South America, Bolivia has really taken to The Dakar 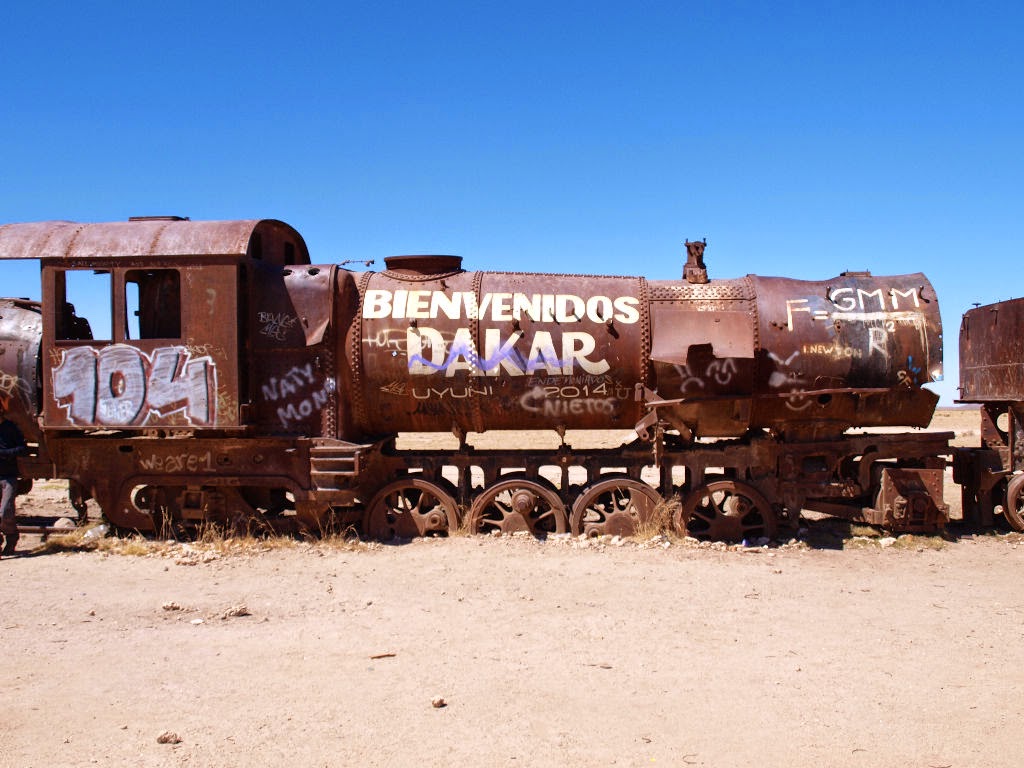 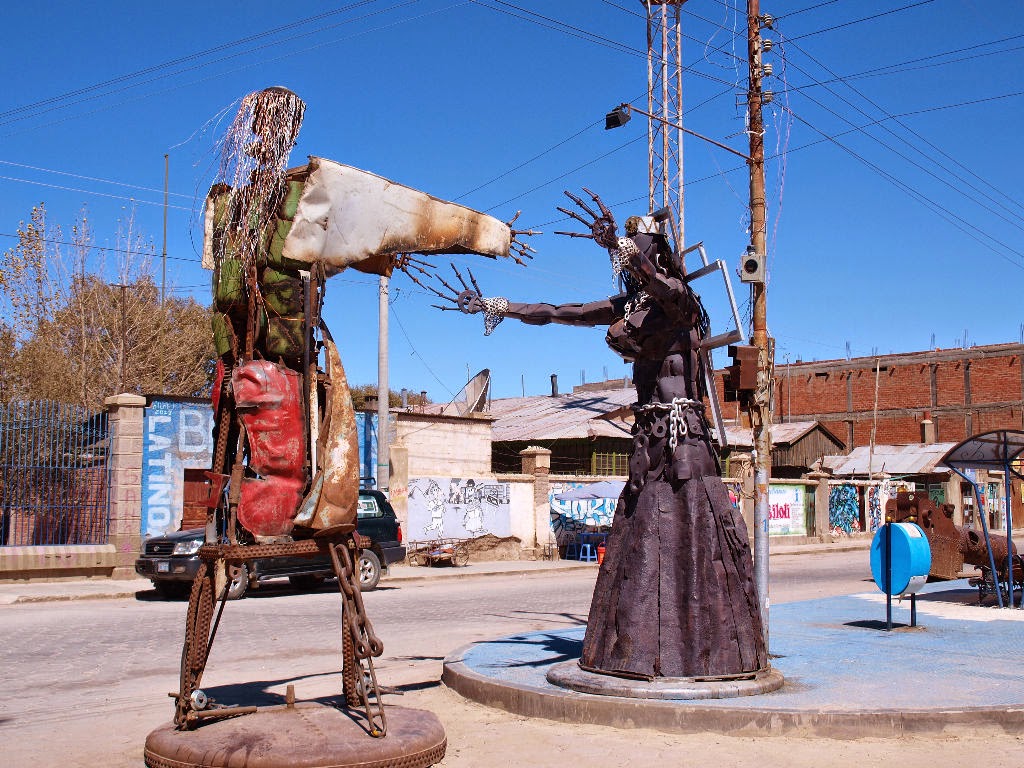 How not to load a bike - our friend Alex's bike 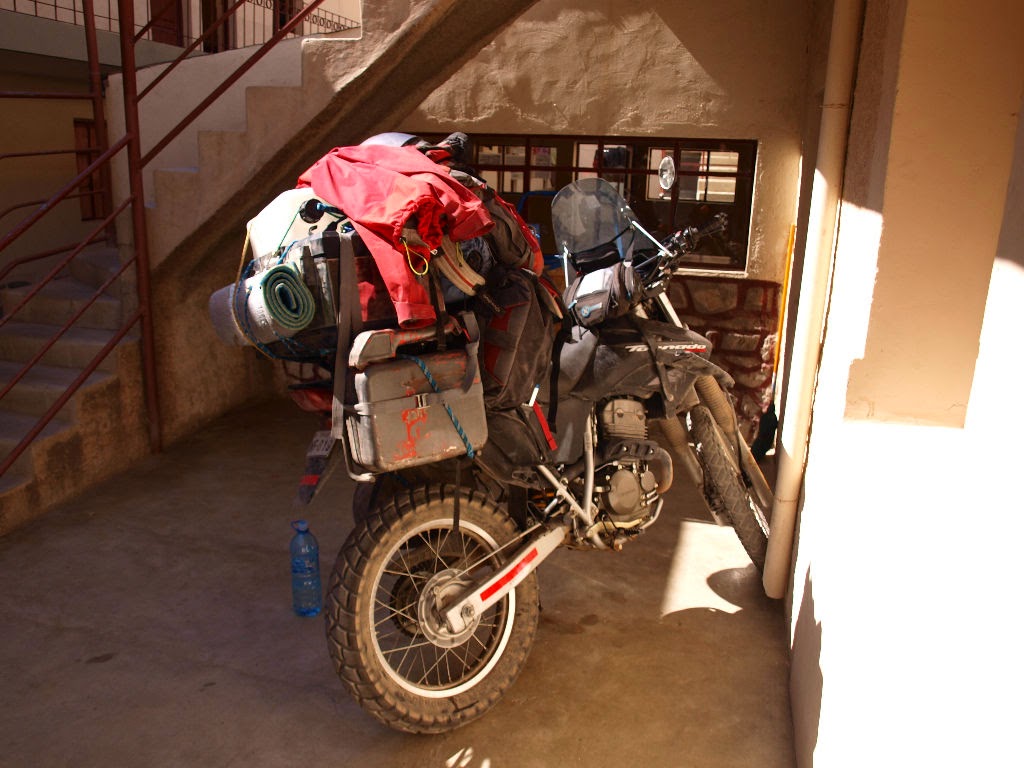 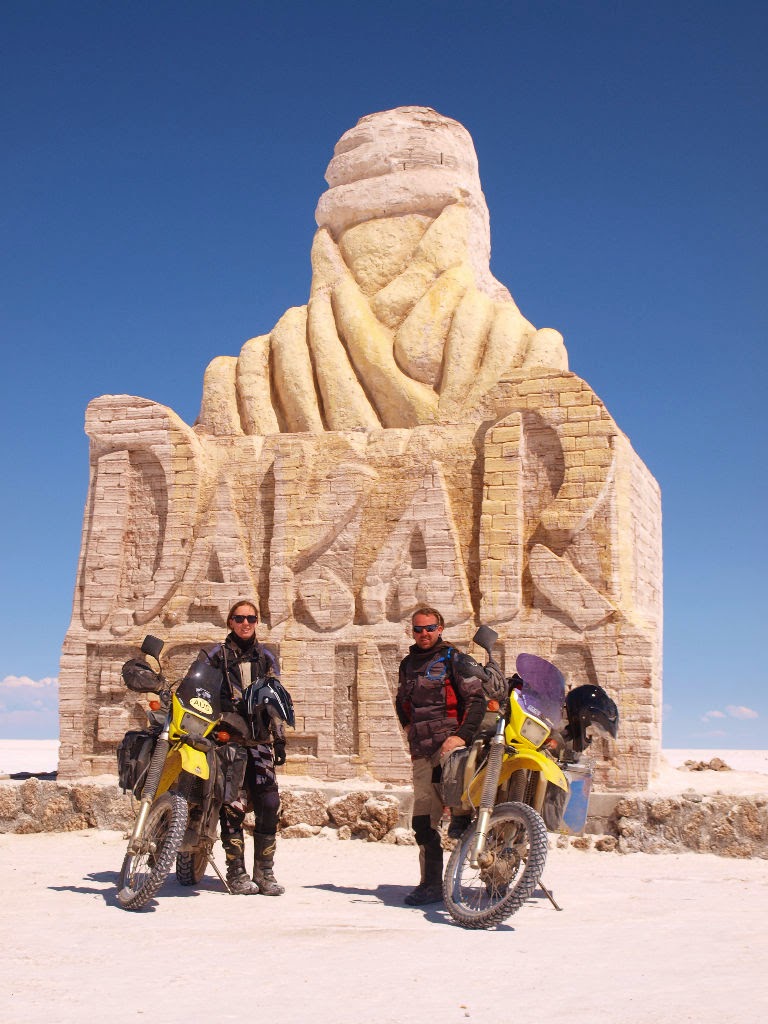 The Aussie flag, beneath the South American Indigenous flag 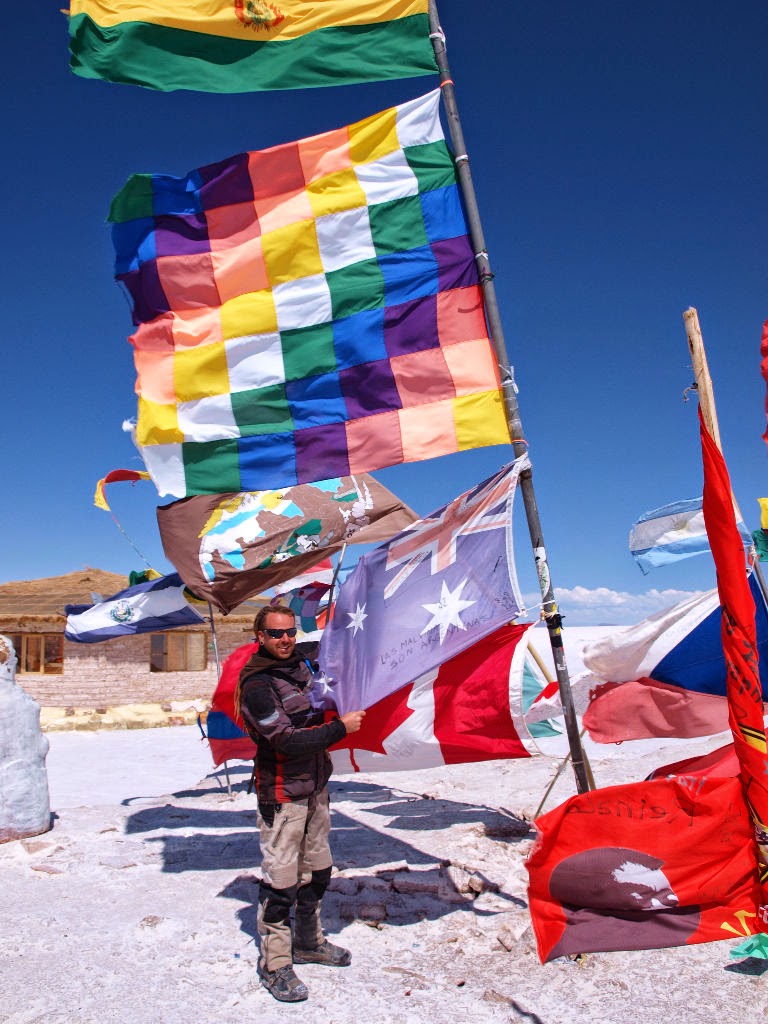 Having fun on the wide expanse of salt 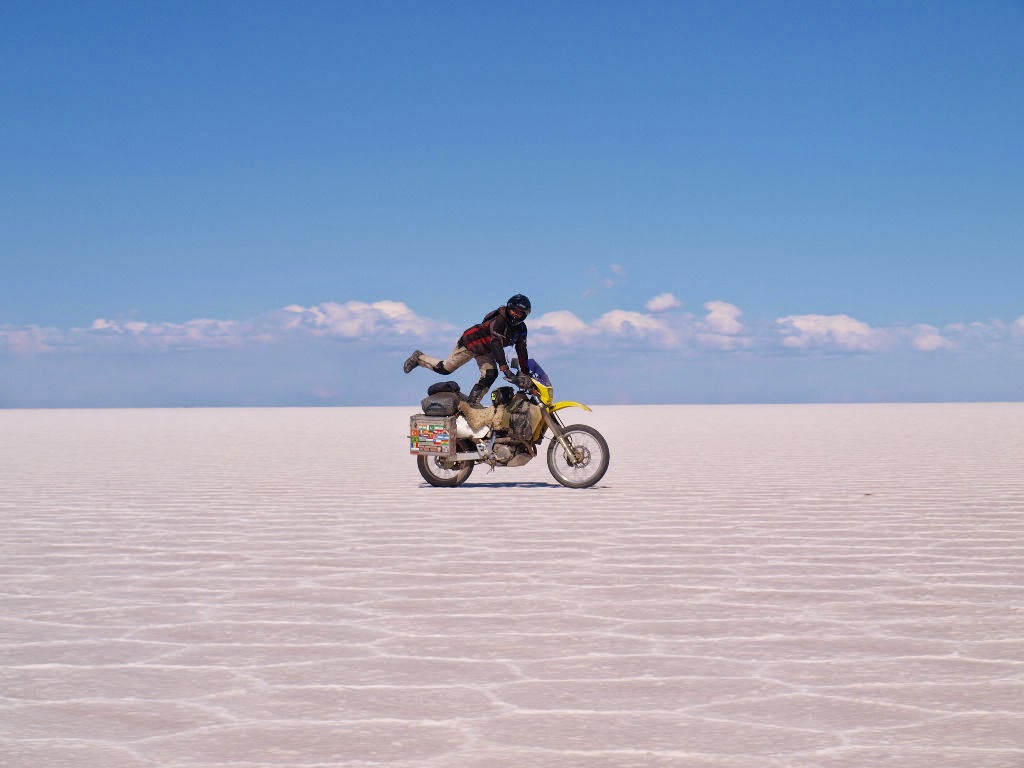 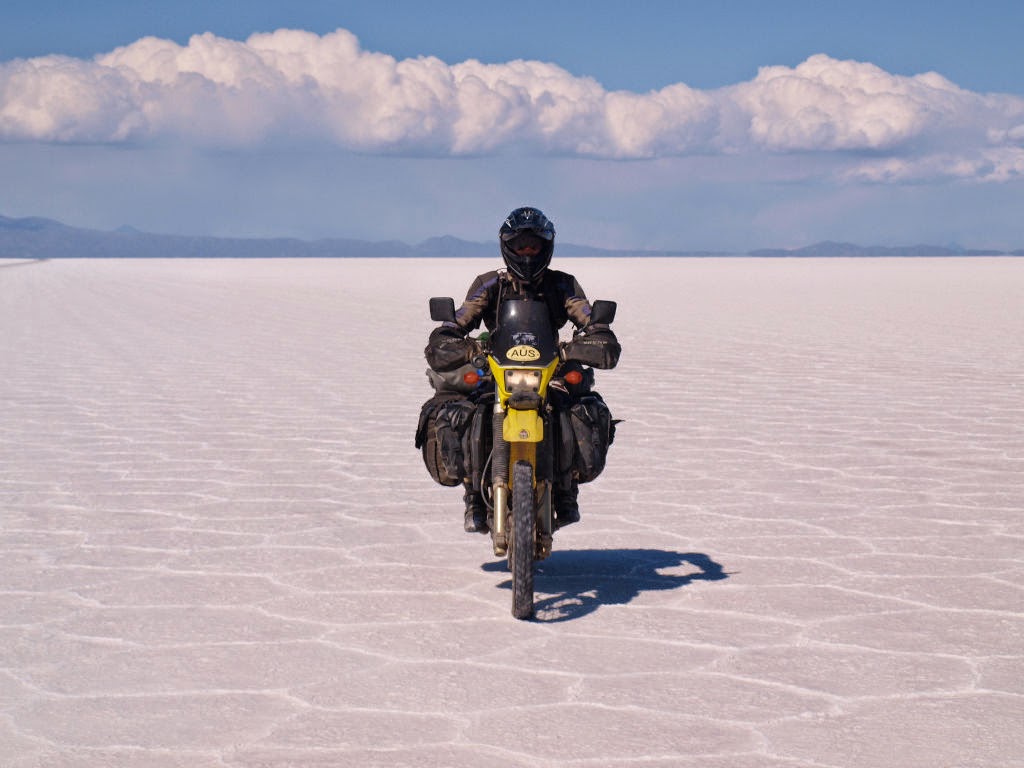 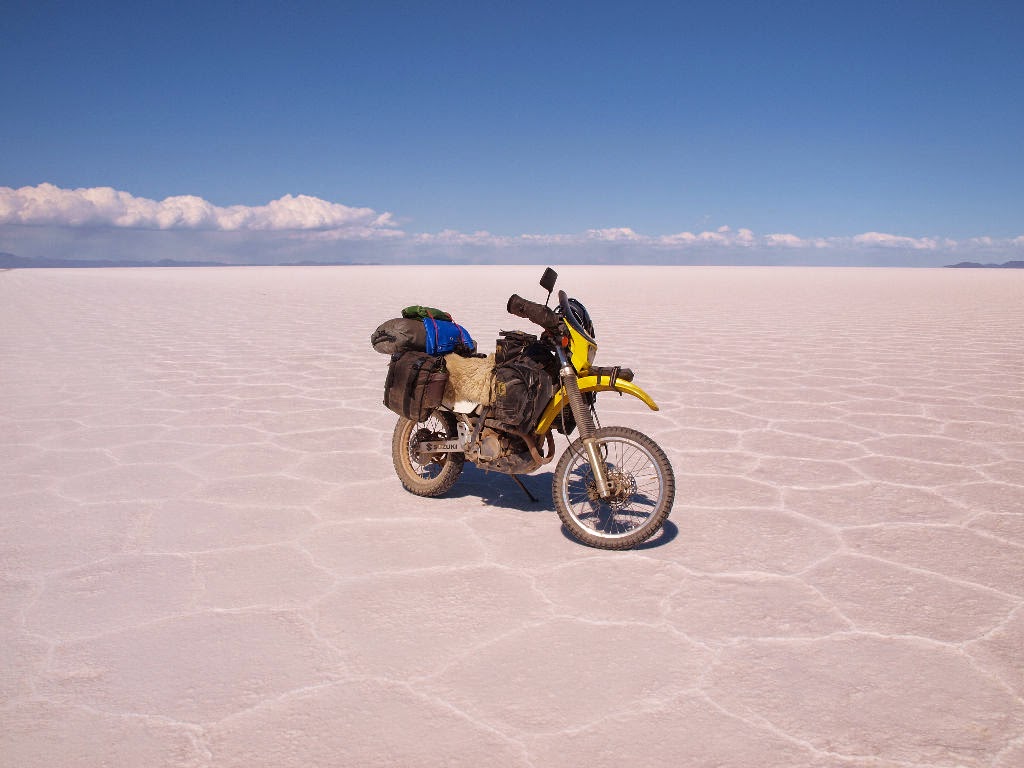 On top of one of the cactus islands in the middle of the Salar, getting close to sunset 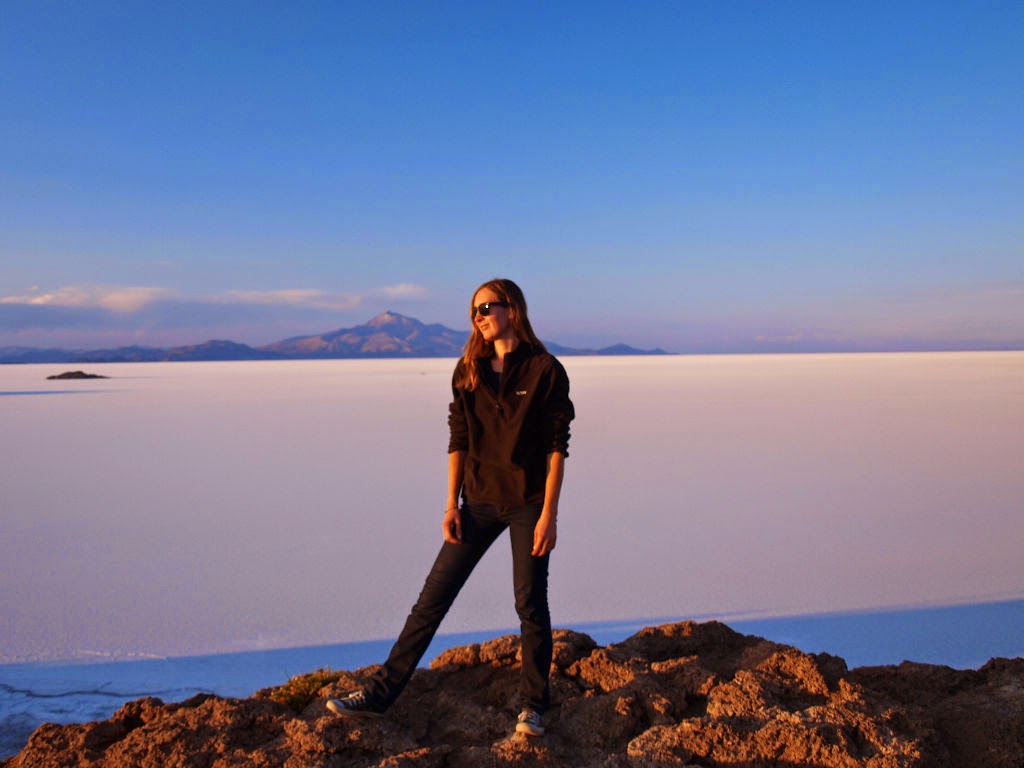 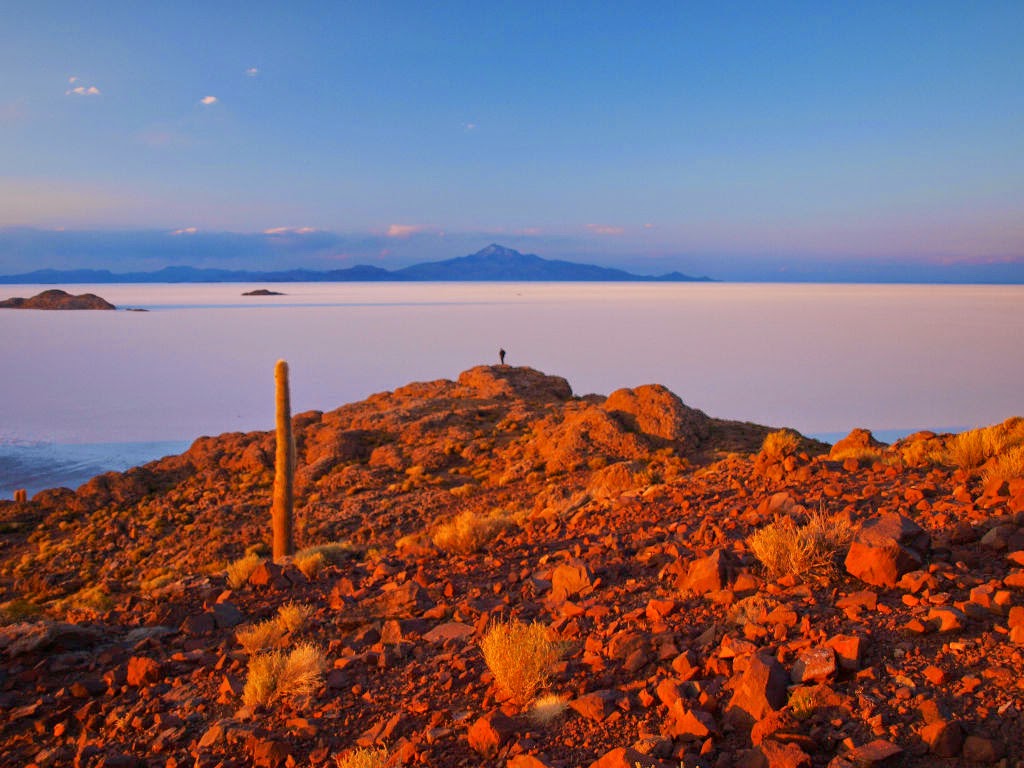 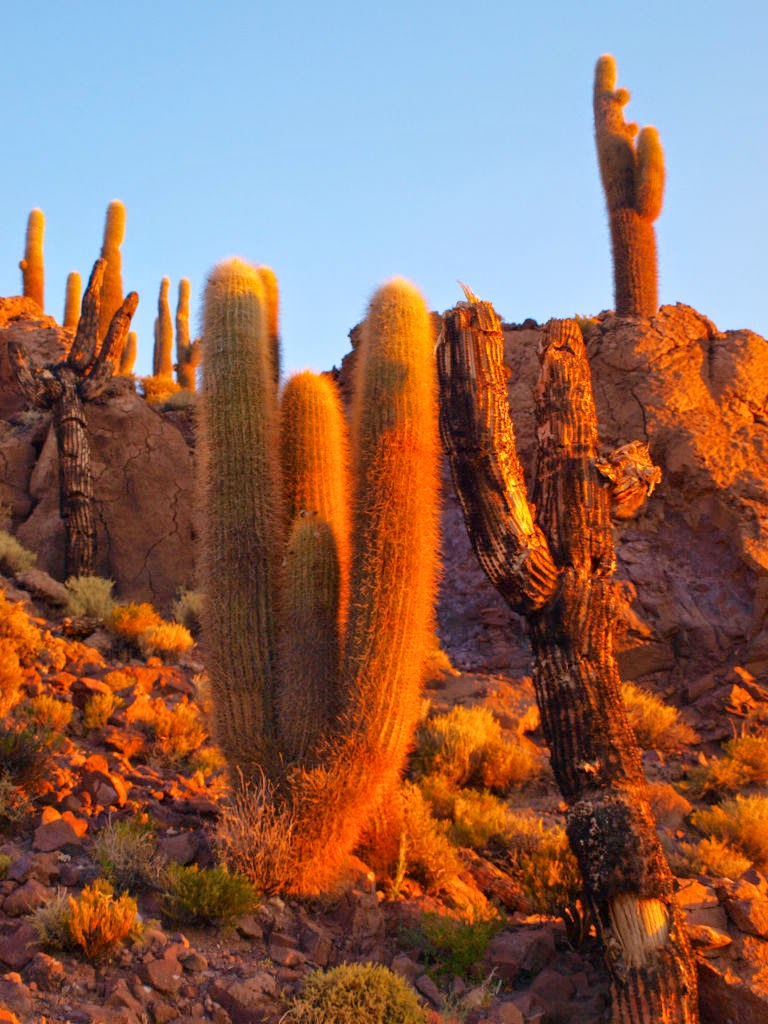 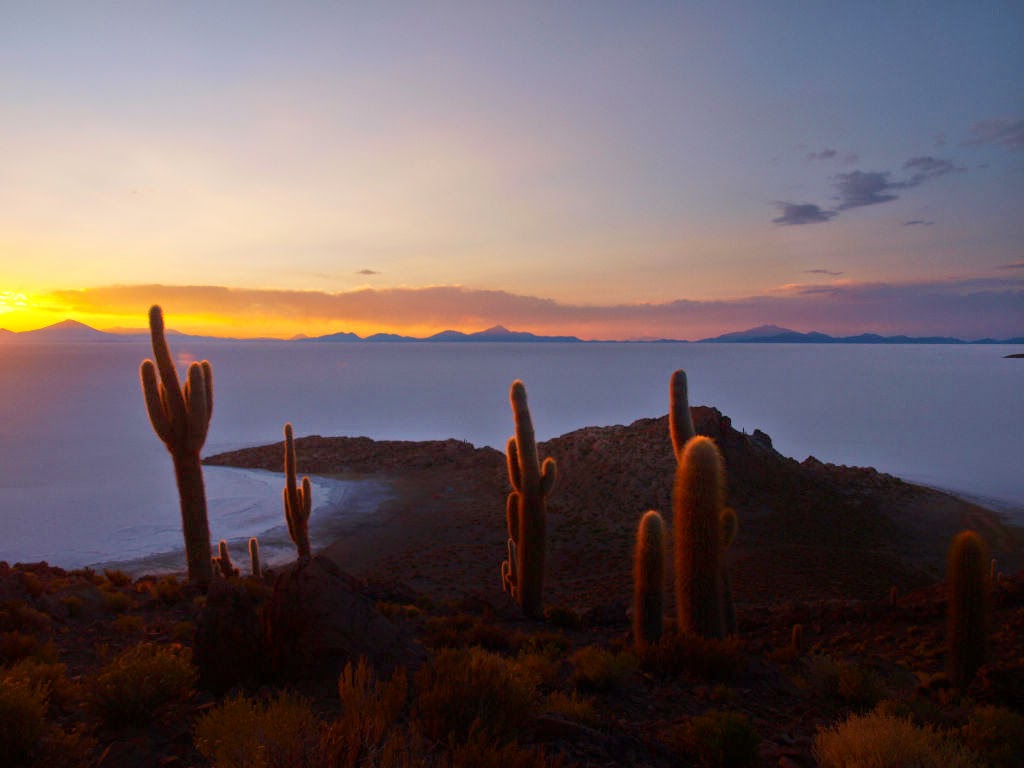 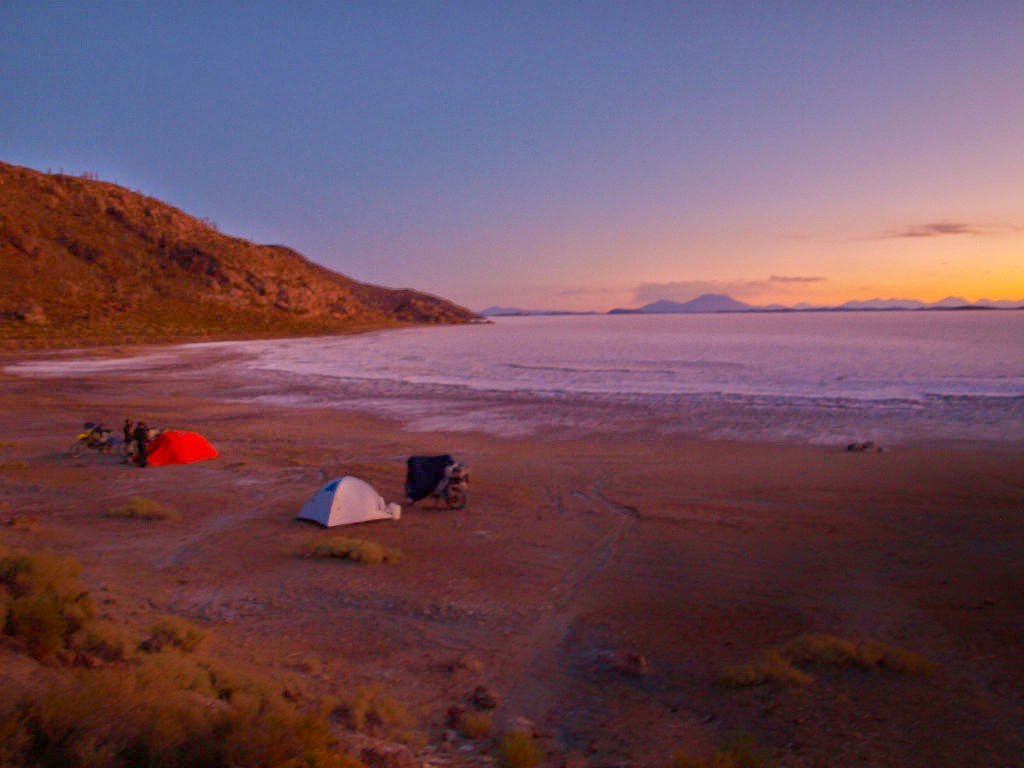 Next day, and some more fun riding on the salt 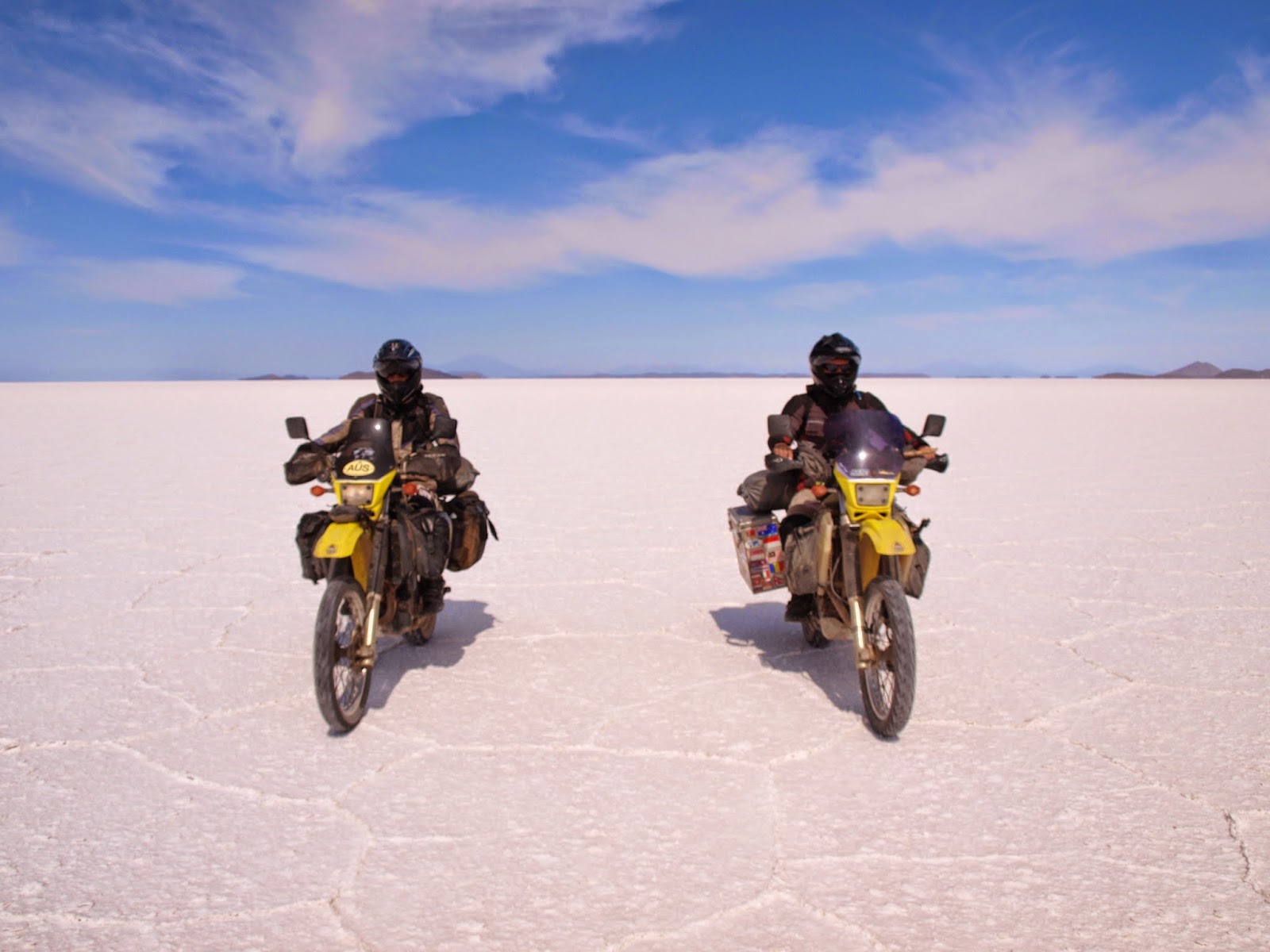 It was harder than expected to try and get some perspective photos that the Salar is so famous for, but here's a couple 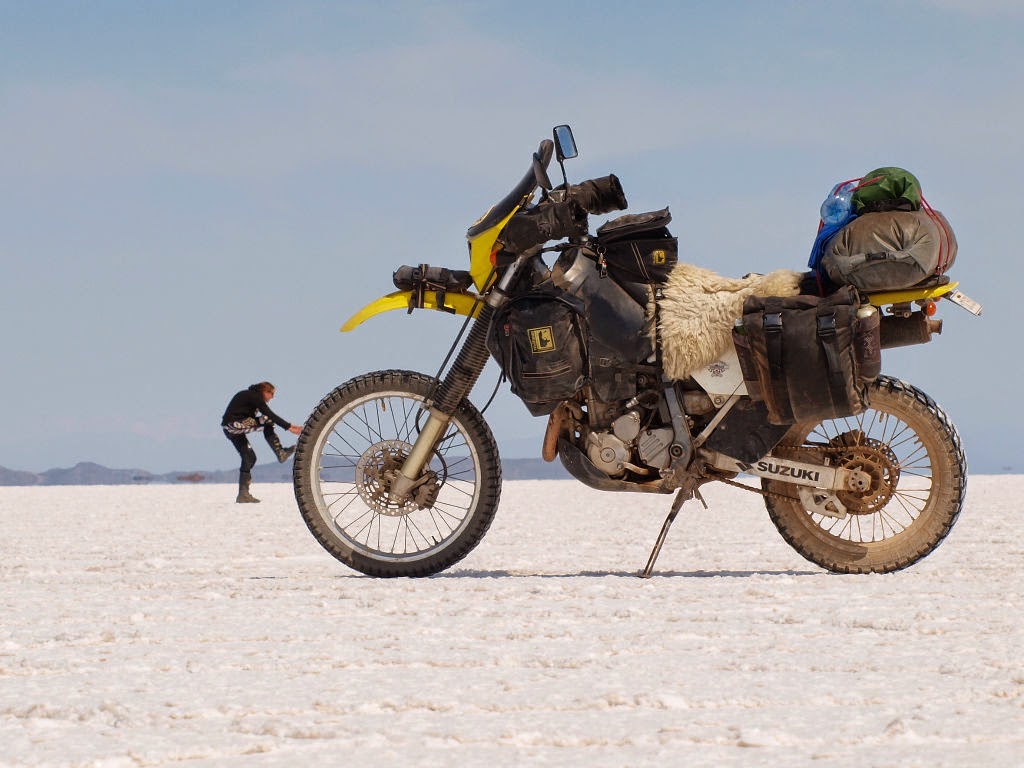 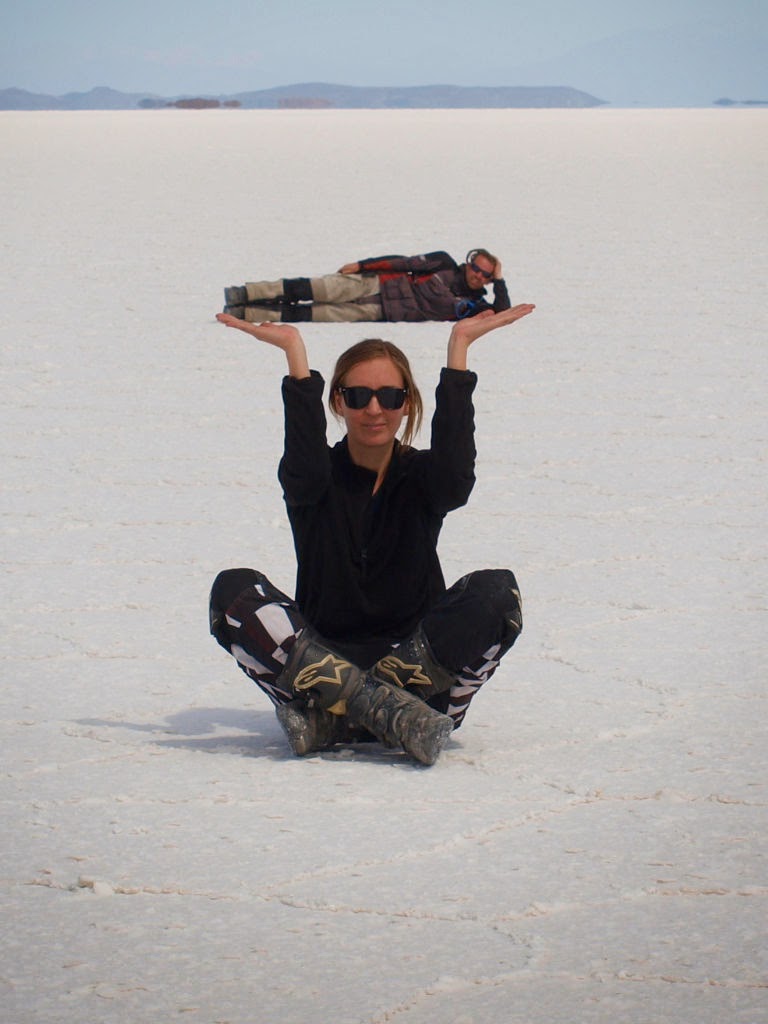 Local woman with child at the market in Uyuni 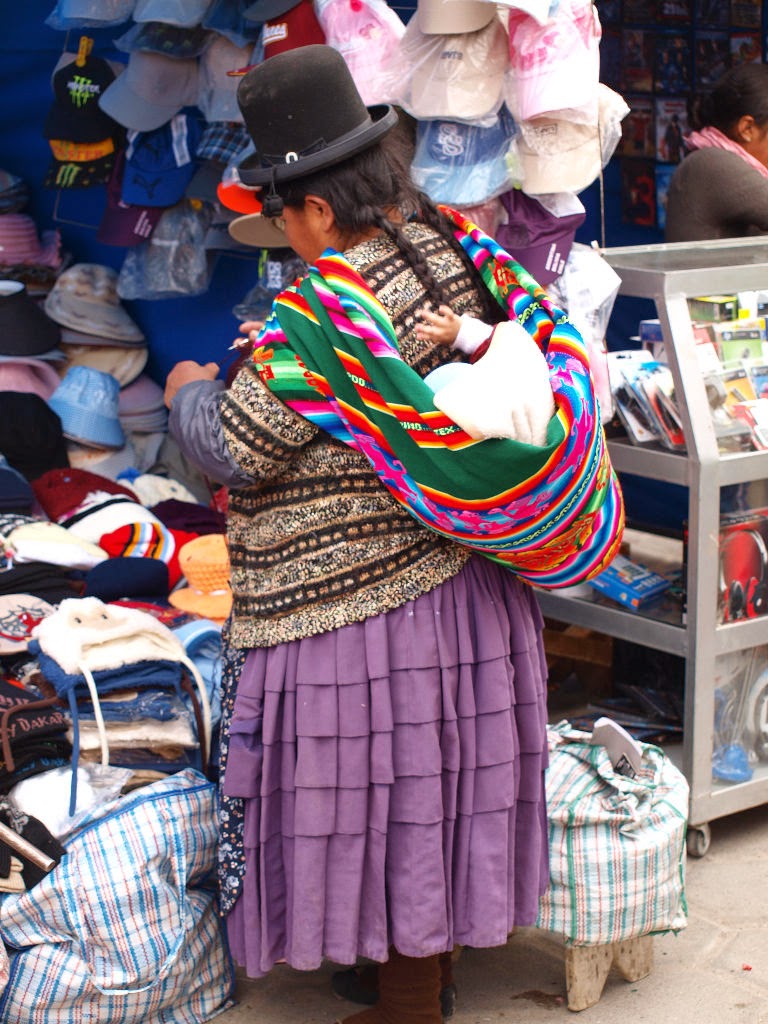 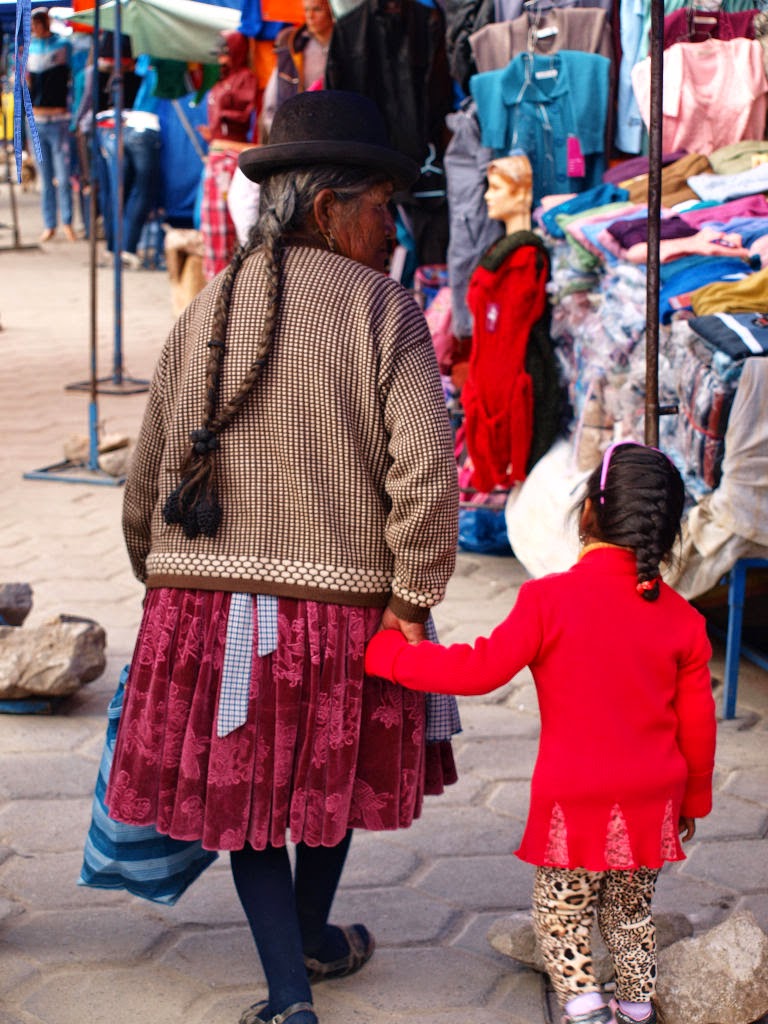 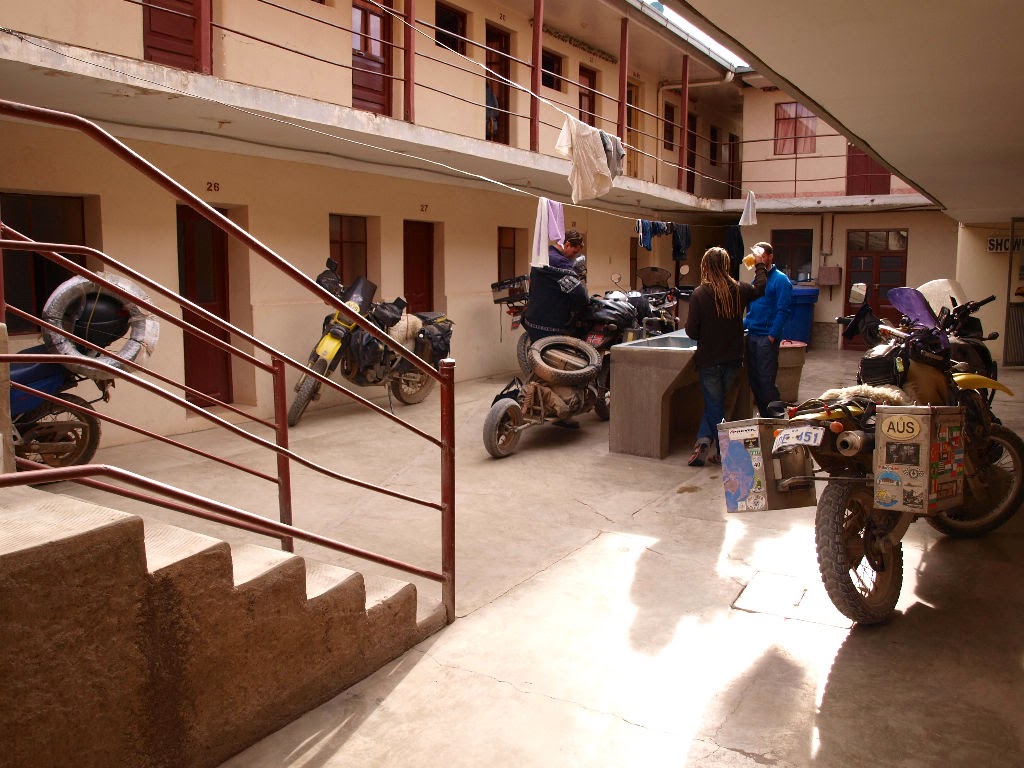