By Mark
We left Siem Reap to head north to the Thai border to check out one more temple with a bit of a checkered past. Preah Vihear has been a site of turmoil for years with Thailand wanting this part of Cambodia for many centuries. Now still in Cambodians hands we still had a tough time trying to get up to this temple. We arrived and received our free ticket with no problems. On leaving we were quickly hailed down by the tourist police. The fellow who pulled us over said his boss wanted a word with us. No worries we thought and wandered on in to his office. "Can I see your licence and passport please". Ok we thought and handed them over. He then started going on about the dangers and so forth of travelling to this temple, the problems with the Thais and the dangerous road conditions was a huge issue for him. After repeating himself and talking in circles for about 10 minutes the truth to why we were here was revealed. Because of the dangerous conditions he considered himself responsible for us but maybe if we could pay him a donation of 3, 4 or maybe $5 or not, the choice was ours that things could be different. Maybe it could just become safe for us with a few more dollars in his pocket than to be weighing us down in ours! We told him straight up that we were not in for this donation giving and that we will be fine just to head on up this road. He didn't see kindly to us not donating money to his cause and changed his mind quickly and told us that there was no way we would be riding up the mountain to the temple. With this we got up and walked straight out without saying another word. I was so pissed at him that I was ready to get back on the bike and see if he would chase us up the hill. Surprisingly he had a change of heart and just as we were to leave he came out to tell us that his 'boss' said we could go on up if we were to write a letter accepting full responsibility for our actions in the case of an accident. By this stage we were now unsure of even going up after him painting such a bleak picture. Anyway we wrote this stupid letter to keep him happy and left. I think he let us go as he may be worried that we would tell someone about his efforts of trying to extract a donation from us. We headed on up having no idea of what he was on about as far as the road conditions go.
It was an easy ride up but it was at the top that had us worried. The place was covered with soldiers and police. With the Thai border just under 2km's away the Cambodians were leaving nothing to chance and were heavily equipped for anything that may happen. So we had an uneasy walk to the temple along army bunkers in clear view of any Thais that may have been keeping watch on their side. Once at the top we started to relax a little and took in the beauty of the place. We left with no problems and headed for our destination for the night that was to be Anlong Veng. Time to start getting nervous again as this was once Khmer Rouge strong hold. To this day virtually all residents here are ex-Khmer Rouge cadres or their descendants. Even the owner of our guesthouse we found out, was the official photographer at S-21. He is now the deputy governor of the town. We had no real problems here but always had a funny feeling about things. One older fellow approached us in the street as we headed home after dinner and started talking to us in Khmer, not having any idea what he was on about I put my hand out to shake his hand where I was greeted with the strangest of hand shakes as he dug his middle finger hard into my palm while giving me a stern look and muttered something in Khmer, possibly "Die white man" or something like that. I quickly retracted my hand and bid him farewell. The paranoia subsided and we both managed to sleep well. In the morning we checked out Ta Mok Lake. Brother No 5 also known as the ‘Butcher’ ordered this to be created, but the water killed all the trees that now stand as skeletons, another act of devastation that this movement left behind. Afterwards we moved on towards the Thai border again where we wanted to check out the cremation site of Pol Pot. Nothing special to look at and seems a fitting end to an evil man who was never officially convicted of the terrible crimes he committed. Many people visit this site, a few of them remembering brother No 1 with affection so they light incense for him, and it is believed he will give out winning lottery numbers!
We had a slightly uncomfortable walk to the temple
past the front line of Cambodian soldiers in their bunkers 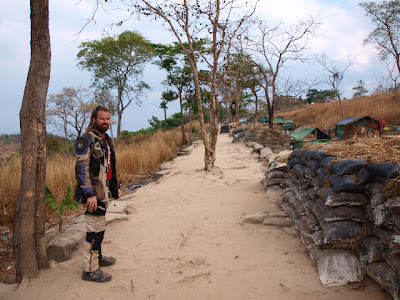 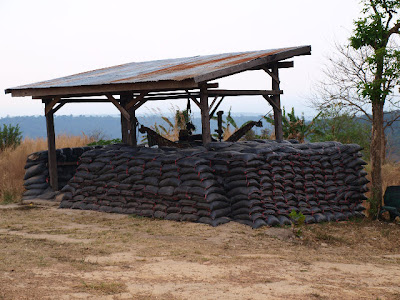 The ancient stairway to the temple, we avoided most of the stairs thankfully 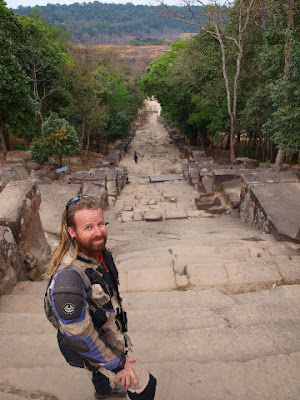 Most of the temple now lies in ruins 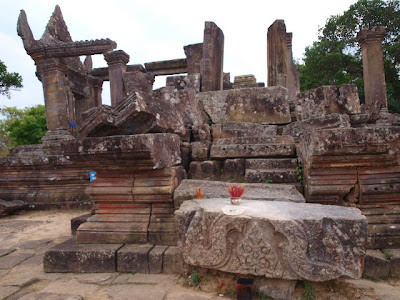 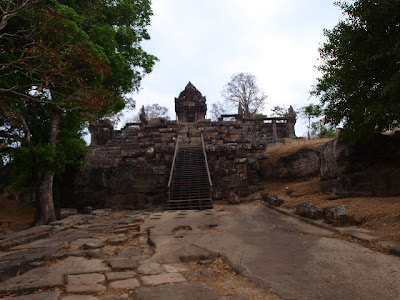 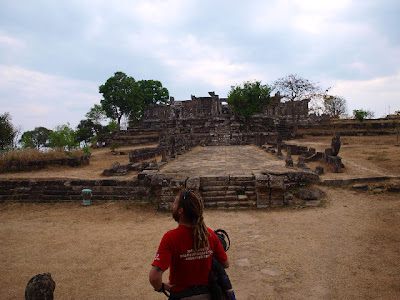 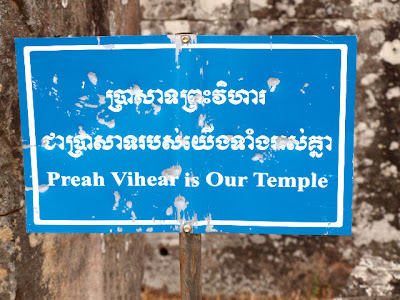 The view from the top over looking the Cambodian countryside 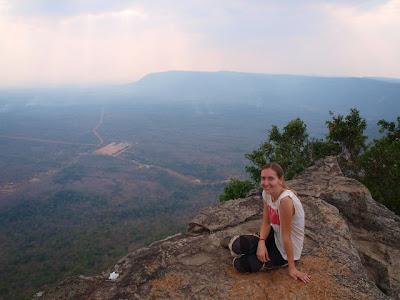 Nothing needs to be said here 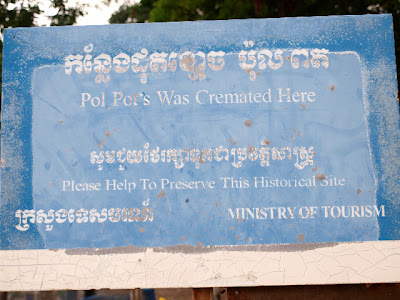 Pol Pots cremation site, nothing special which is a fitting end to his evil life 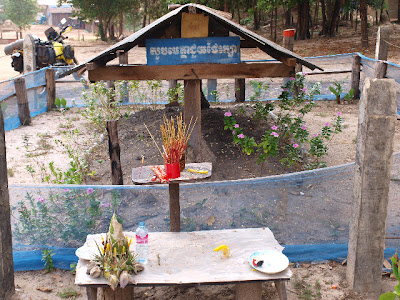 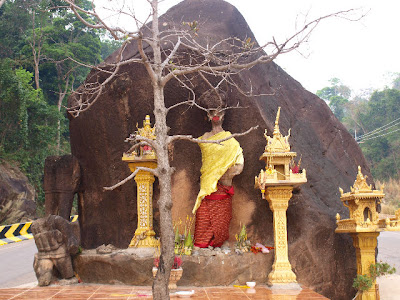 The usual curious boys checking out the bikes 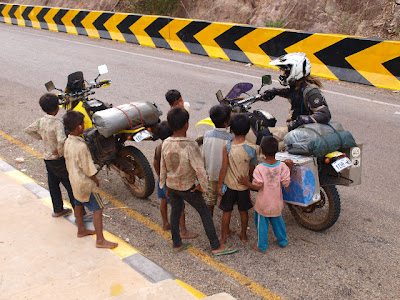 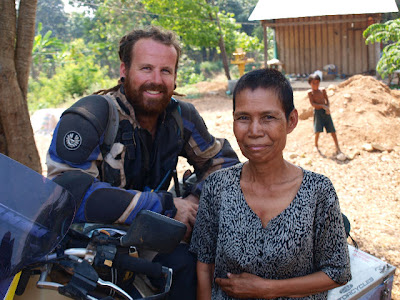