I thought it would have been easy leaving Ushuaia, thinking heading North will be great to find some warmer weather. In reality it was sad, we had just spent the past five days with great people and it was hard to say goodbye. Everyone has to move on at some stage and well we were not the first to go. We hope to see our new friends further on up the road.

Our main aim was to head for the border with Chile and set up camp on the beach in a little border place called San Sebastian. After a cold ride we arrived to a lovely sunny afternoon at the border post. We checked out the beach and found it to be a little too windy to set up camp right on the beach but just back from the beach was a little type of quarry which had a nice large bank protecting us from the winds. This was a good place to not have to worry about the winds, however we were not expecting rain over night and come the morning we were meant to hit the road early for Porvenir to catch the ferry across the Magellan Strait for Punta Arenas. Well that was not going to happen. We woke up in the morning to wind and rain. In the very short time it had rained the whole ground around us had turned into a complete quagmire. The top soil was thick mud and was sticking to everything that touched it. We decided to stay in bed a little longer hoping for the rain to stop. Wishful thinking! It never happened but it did ease up so when we had the chance we packed up quickly and tried to move off to the border crossing. The short ride was a slippery one with the bikes sliding out all over the place.

We looked a state as we walked into the customs office looking wet and dirty with mud covering our clothes. No worries from the officials as they quickly processed us in the next to empty room and sent us on our way. We were not sure how the day would pan out as we had 150km's of dirt road to cover and if the first kilometre was to go by, it was going to make for a very interesting day. Lucky for us the main road was well built and with a good solid top layer, no dust, no mud but plenty of puddles. There was no chance we were going to have dry feet by the end of the day. Again the wind was with us but not too bad so our ride was not as bad as we had first anticipated. The road turned worse the closer we got to Porvenir though with sections of very slippery mud, which caught out a Uruguayan couple two-up on a big bike who came off. Luckily they were both OK. We arrived in Povernir with plenty of time to spare to catch the ferry.

On our way into town I witnessed a dog being run over by a car. I cannot remember if we have posted anything in the past about dogs in the deep south of Argentina and Chile. There are so many dogs around and like most dogs around the world they have a thing for chasing motorcycles and we are no exception! With each town we ride through we have dogs hanging out in packs chasing us on either side of the road just waiting for you to stop to have a nice old chomp on your boot. Luckily we have not been bitten yet but there is still along way to go. The poor dog that got run over somehow did get up and walk off. I hope he's OK.

Our main reason to come to Punta Arenas was to find new tyres and we found just that. Only problem, they were not cheap. If only we bought the the ones we found back in Comodoro! Anyways we went ahead and bought one tyre for Sanne's bike which was now all but squared off and I found myself a good second hand front tyre to take with me. My rear is still good for a few more thousand kilometres. I hope. While we were here we also finally put on our new chain and sprockets that we have been travelling with ever since we left London. They were well and deed needing replacing with Sanne's front sprocket even missing teeth. We make sure we get our money's worth and with the old sprockets we got just that. We ended up with nearly 40000km's racked up on those. It pays to go good quality with that sort of life.

We were also in Punta Arena's for New Years and what a let down. It is a decent size city but it was dead. We met up with Ian from Melbourne who I briefly met back in Ushuaia and again on the ferry crossing. We contacted one another to go out for the night. After finding everything all but closed we found a Chinese buffet to eat at and then, after wandering around town looking for a bar with no luck, we found ourselves at the Casino. They were playing terrible music but this seemed to be where the 'party' (and the whole town) was at. So we sat and talked and had a few drinks and saw in the new year with a very un-festive count down. At least we were in good company.

On New Years day we decided to hit the road for Puerto Natales, the gateway to Parque Nacional Torres Del Paine. The is meant to be one of the most impressive and beautiful national parks in all of South America. We were looking forward to it but like all other parts of the country the wild wind and weather is very unpredictable in these parts and that we were not looking forward to. Along the way we were hit with strong cold winds but with many bus shelters along the way we were able to get a bit of a break from the relentless winds battering us.
Upon arrival in town we had planned to camp but once in town we could not find a place to keep the bikes safe next to our tent so we opted for a hostel and boy am I clad we did. There is nothing better than a warm dry bed to sleep in at night and a hot shower to go along with it. We were just happy that it was at a fraction of the cost of where we stayed in Punta Arenas where we had no choice but to stay in a hostel after our tent was water logged from the previous nights camp.
You really get the feeling of the popularity of this area when you notice the hoards of Goretex travellers walking around town. Not always a bad thing as there are good cheap places to eat and you can find all the things you need to stock up on before hitting the national park. All we needed now was for the weather to be on our side...


Lovely afternoon by the beach in San Sebastian 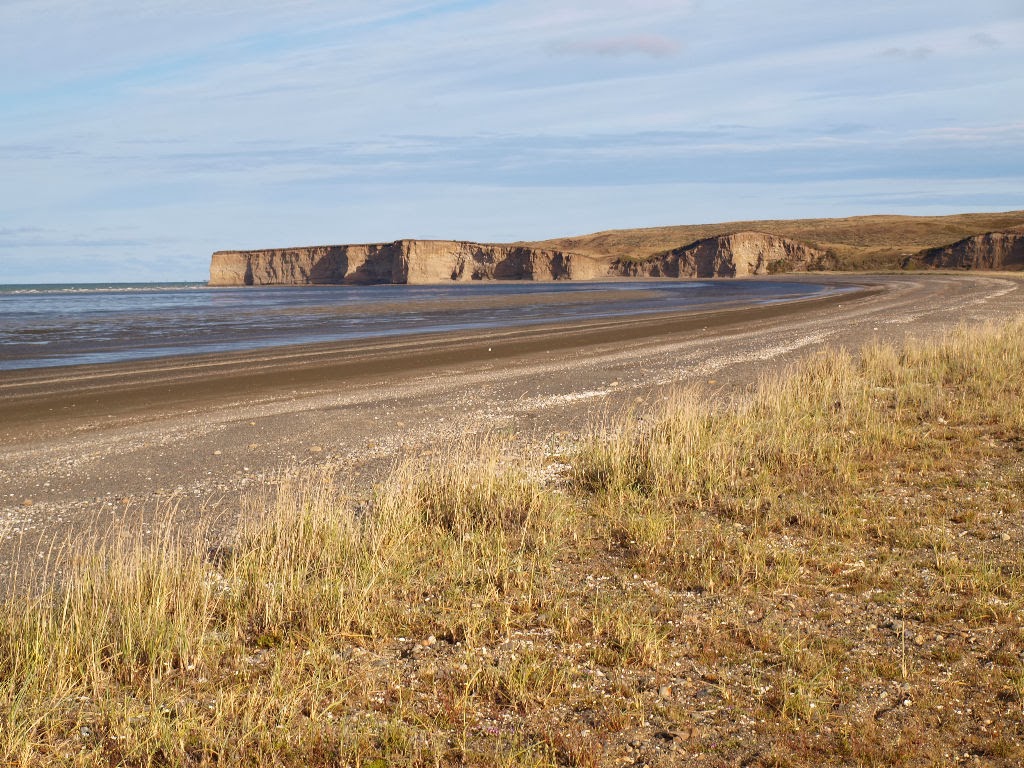 Our campspot sheltered by the winds, the following morning it wasn't quite so dry 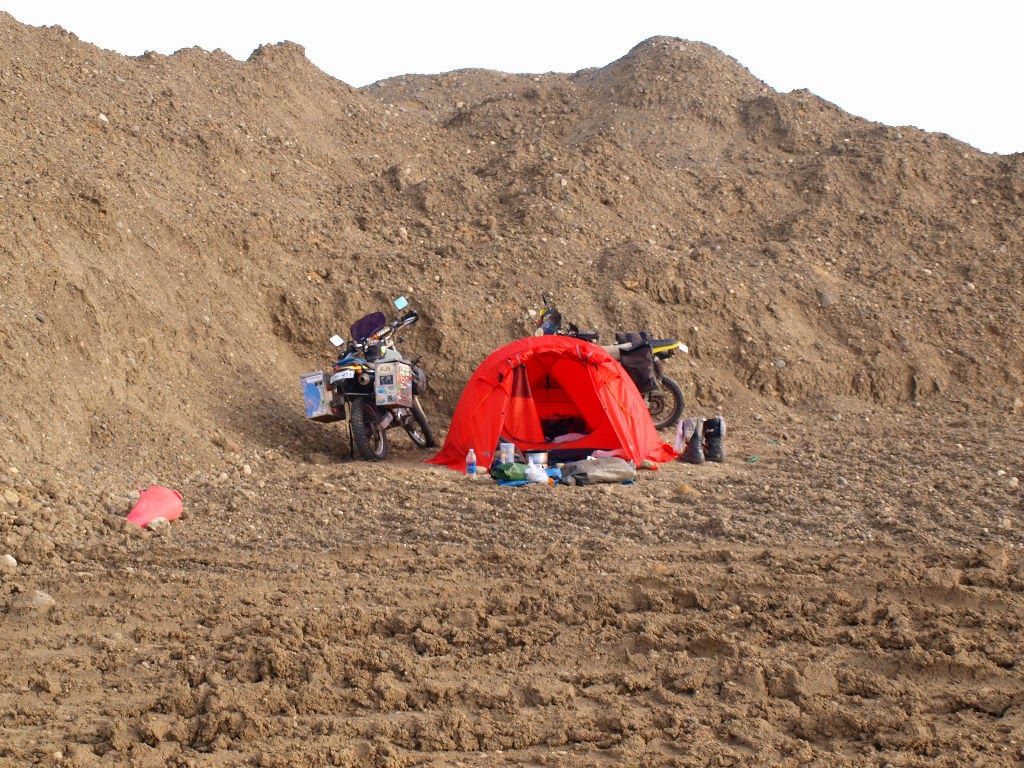 The road to Porvenir 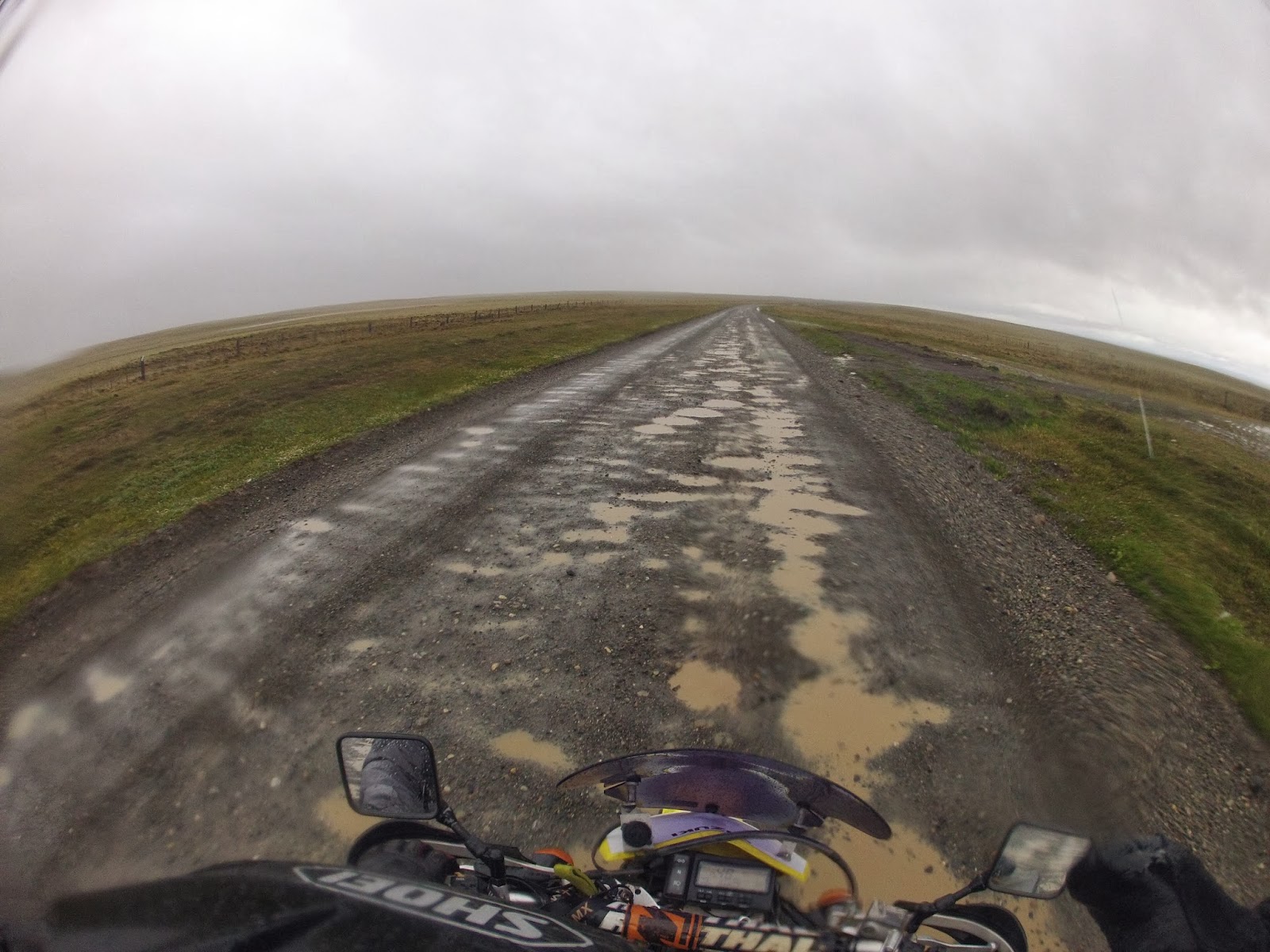 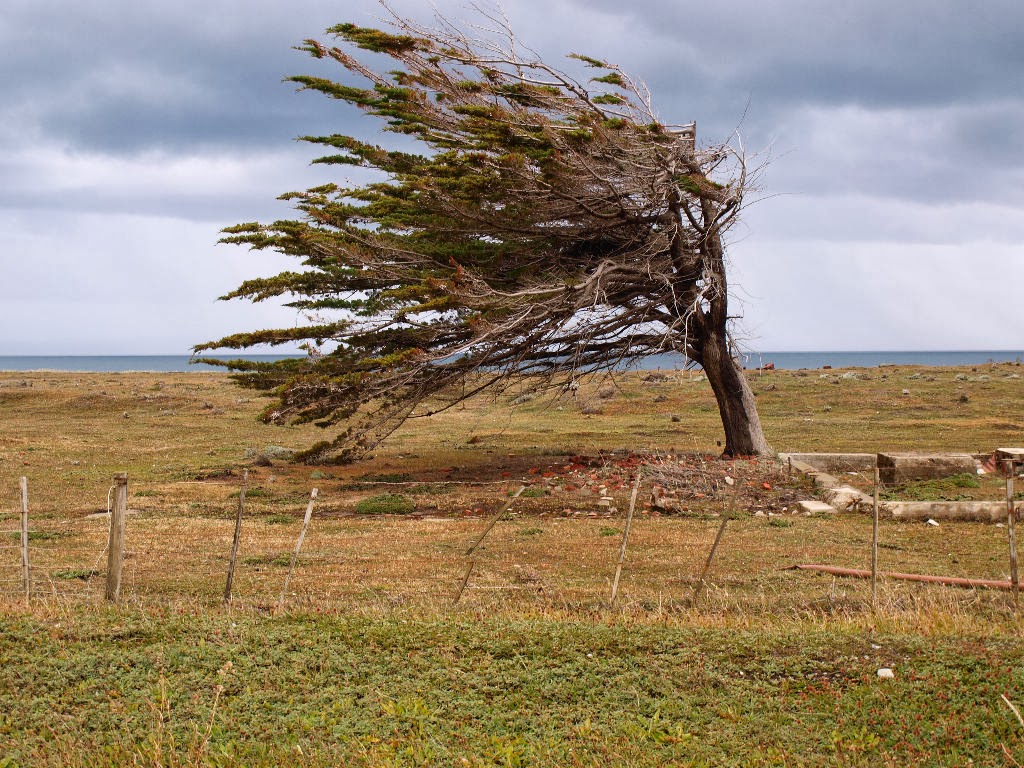 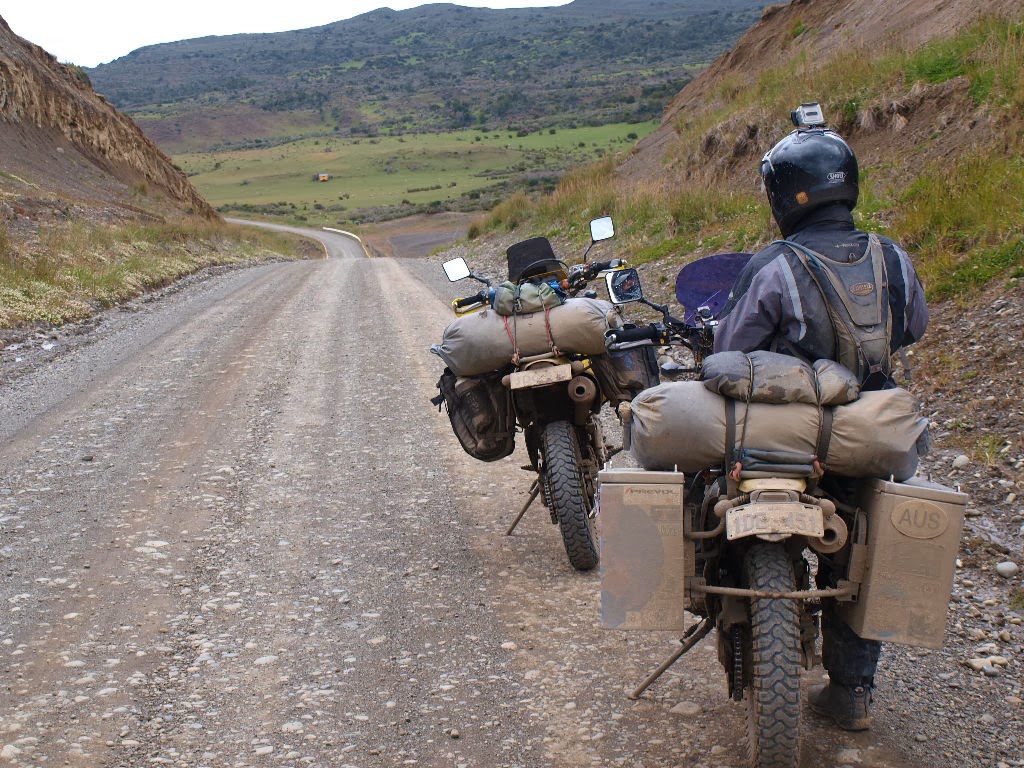 On the ferry from Porvenir to Punta Arenas 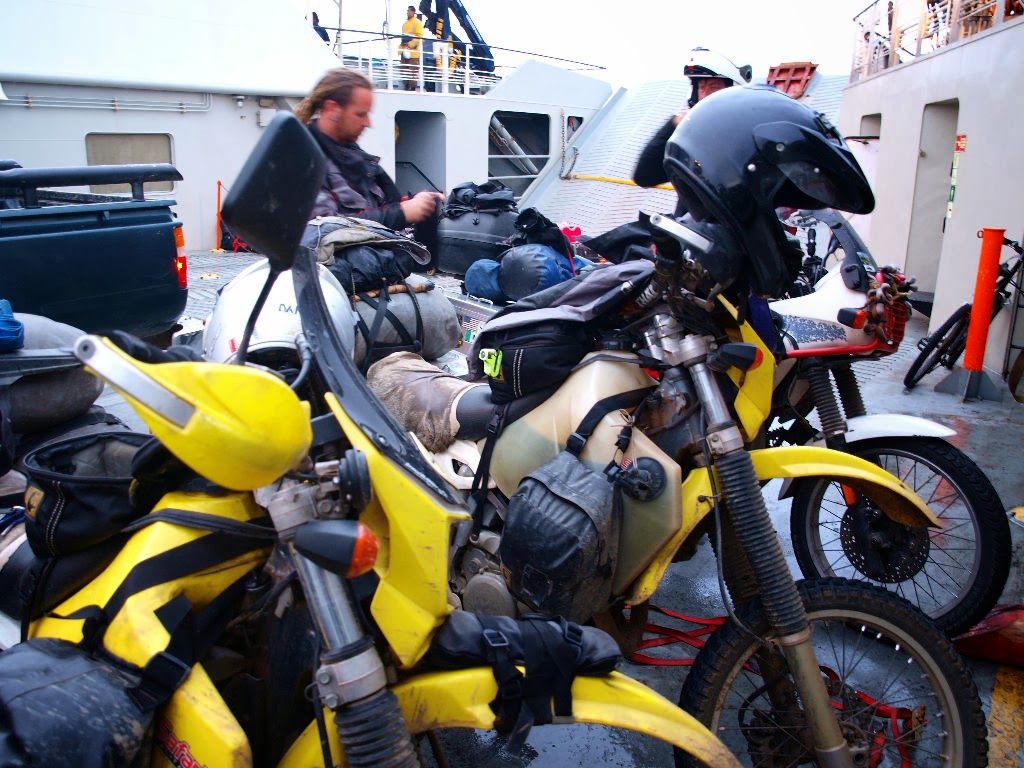 A few local brews to get New Years celebrations under way 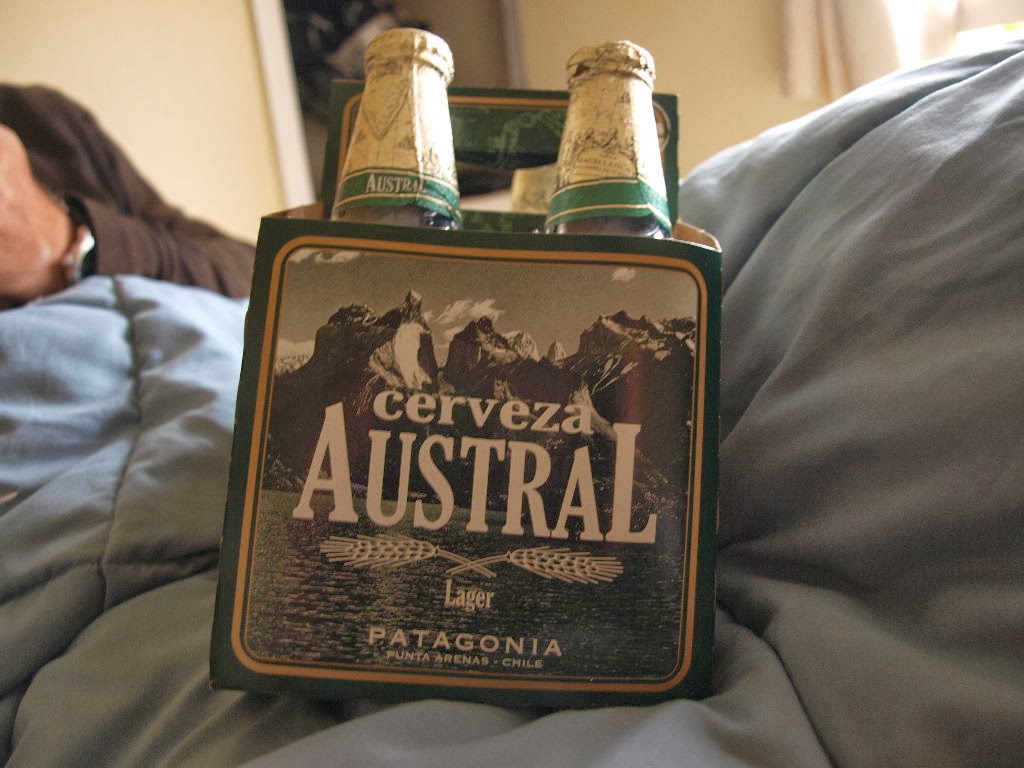 The main square in Punta Arenas 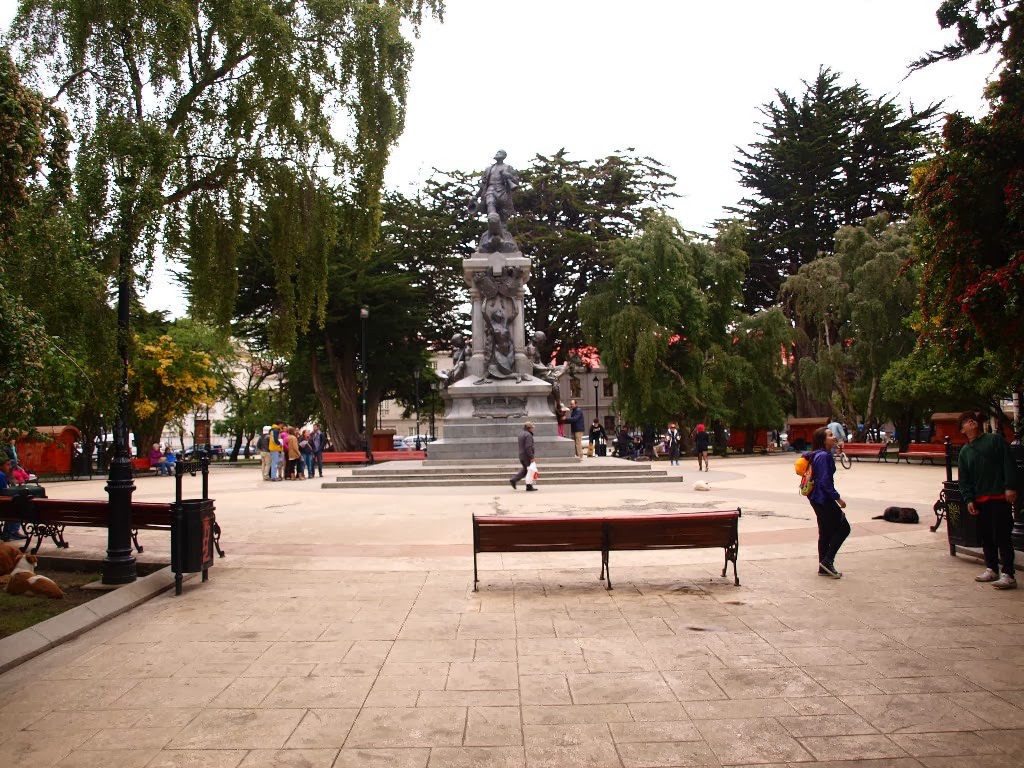 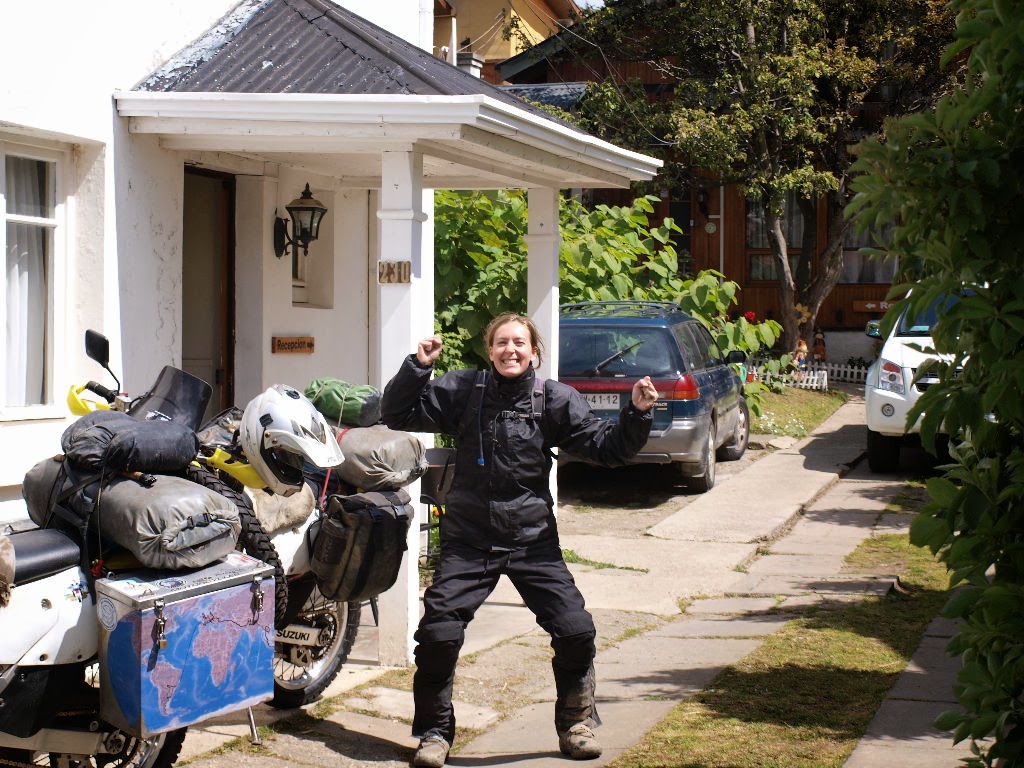 Sheltering from the cold and wind in a empty bus stop 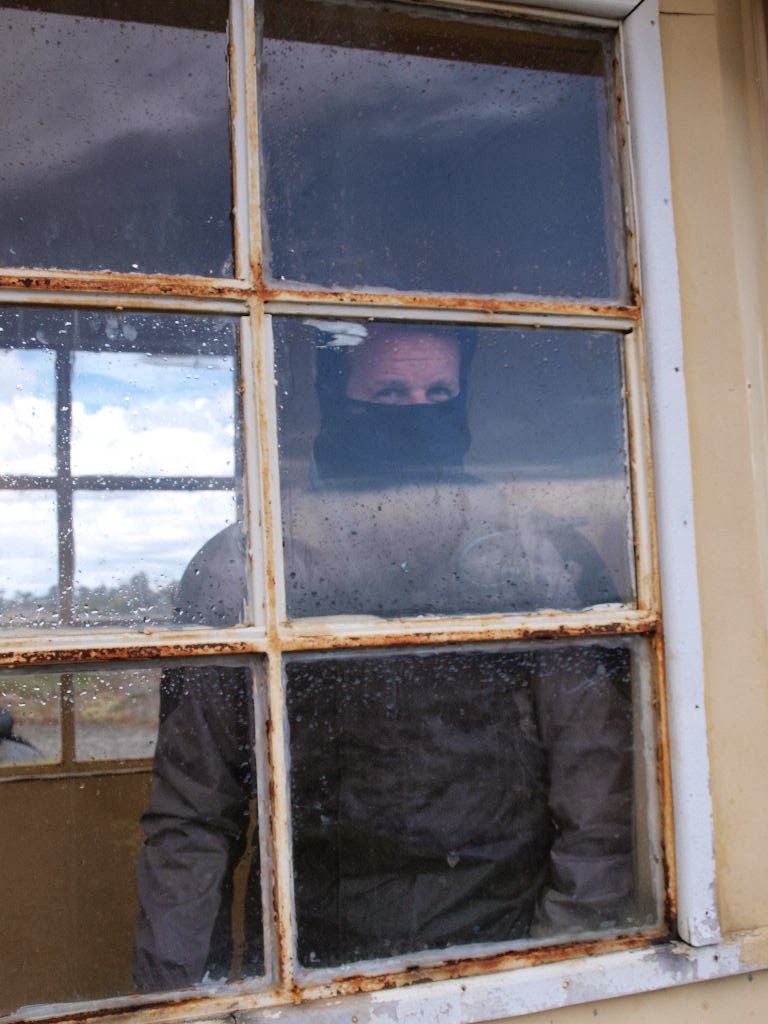 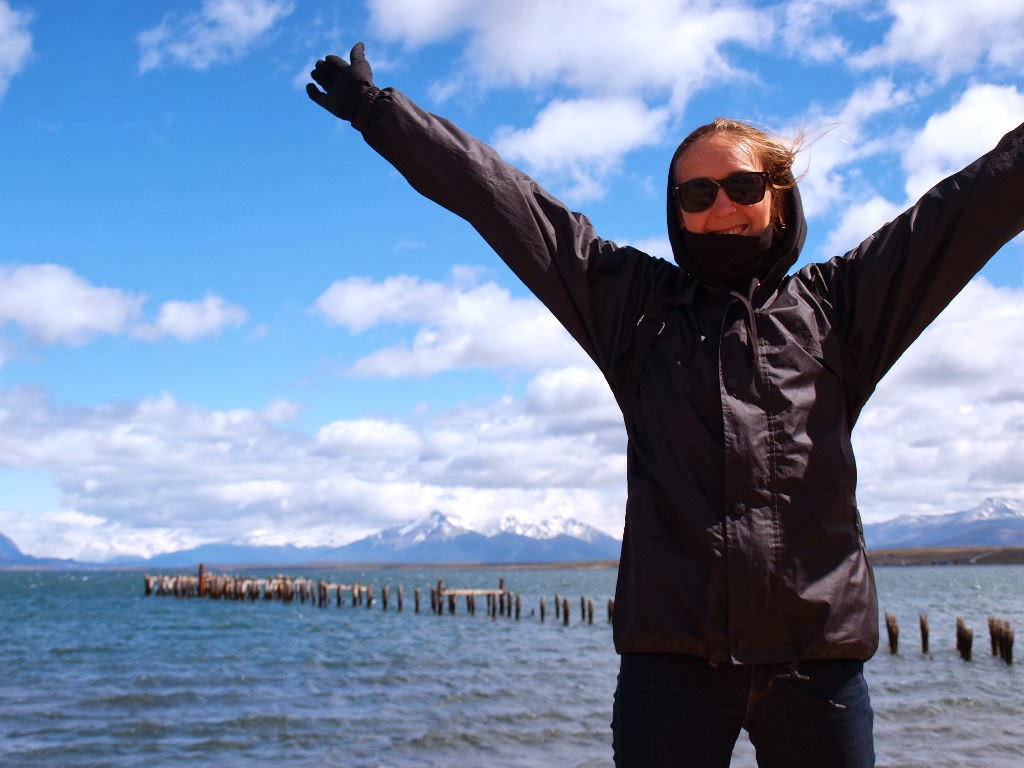 Sculptures by the river in Puerto Natales 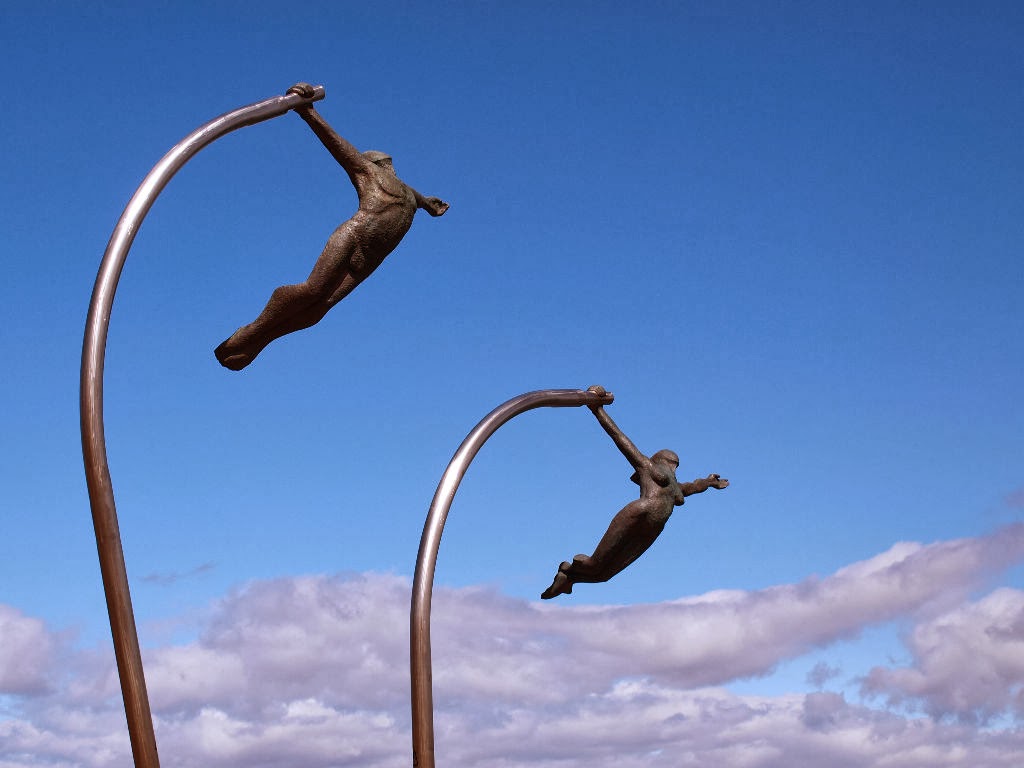 Clearish skies out over the Andes 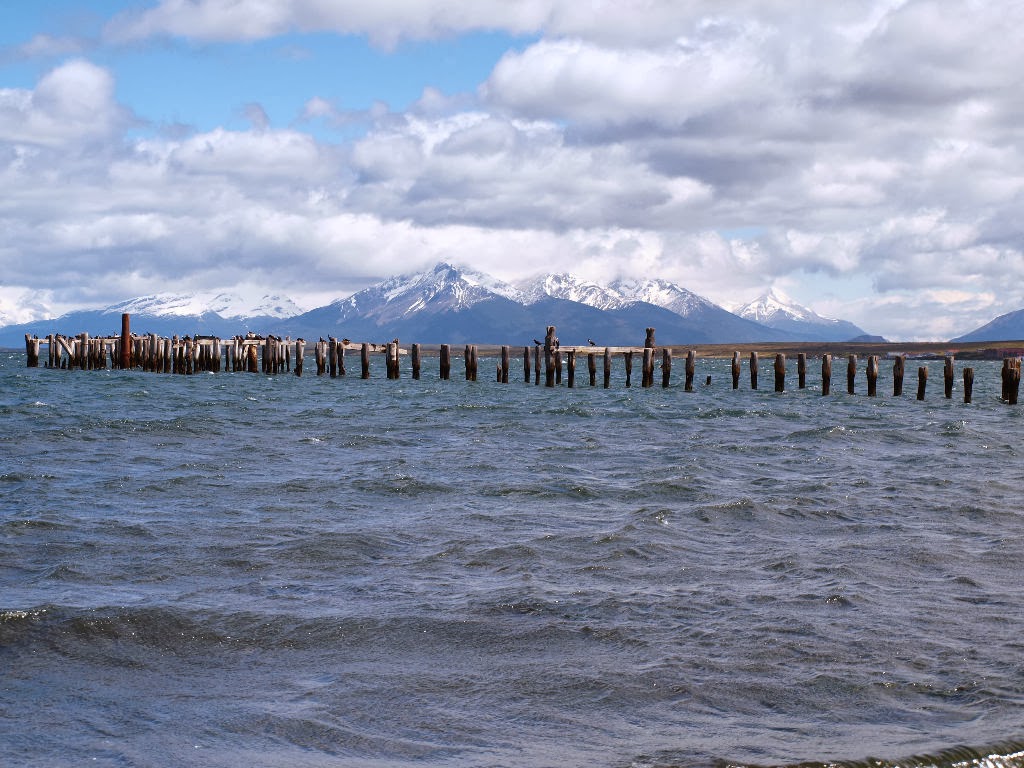 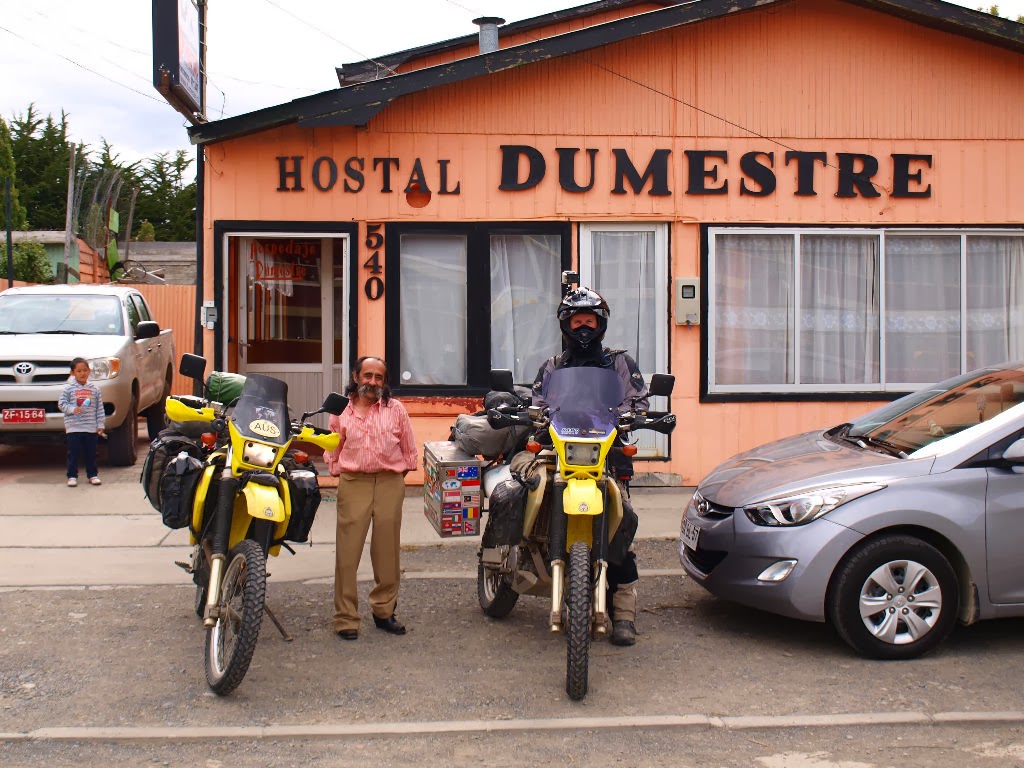 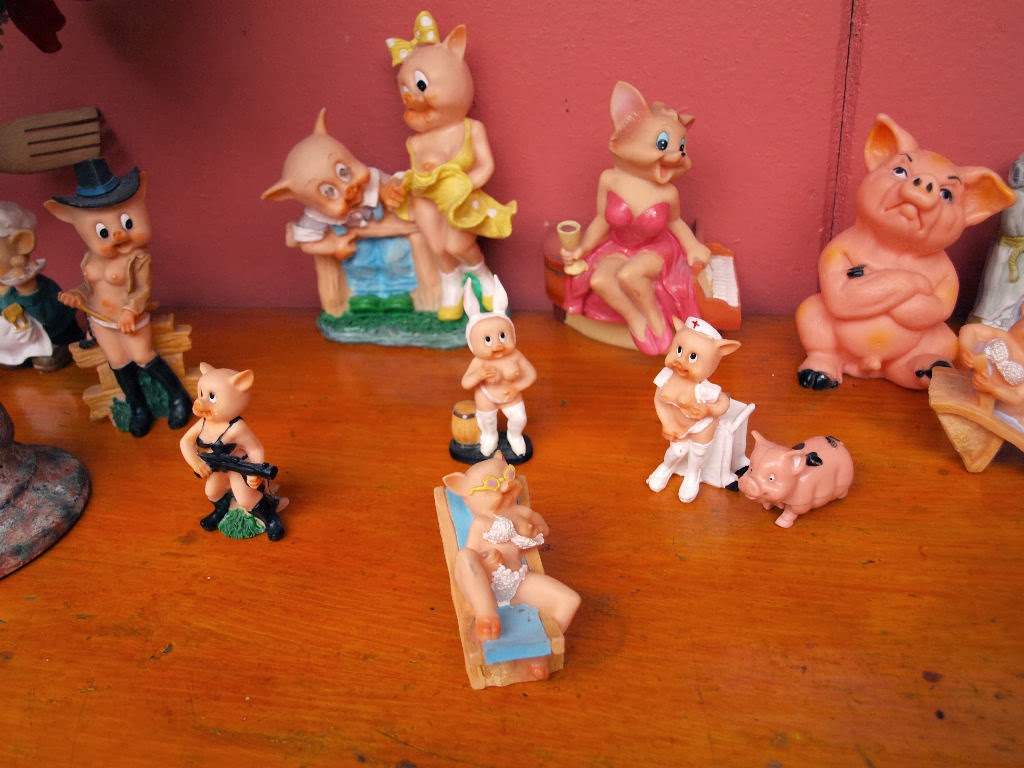 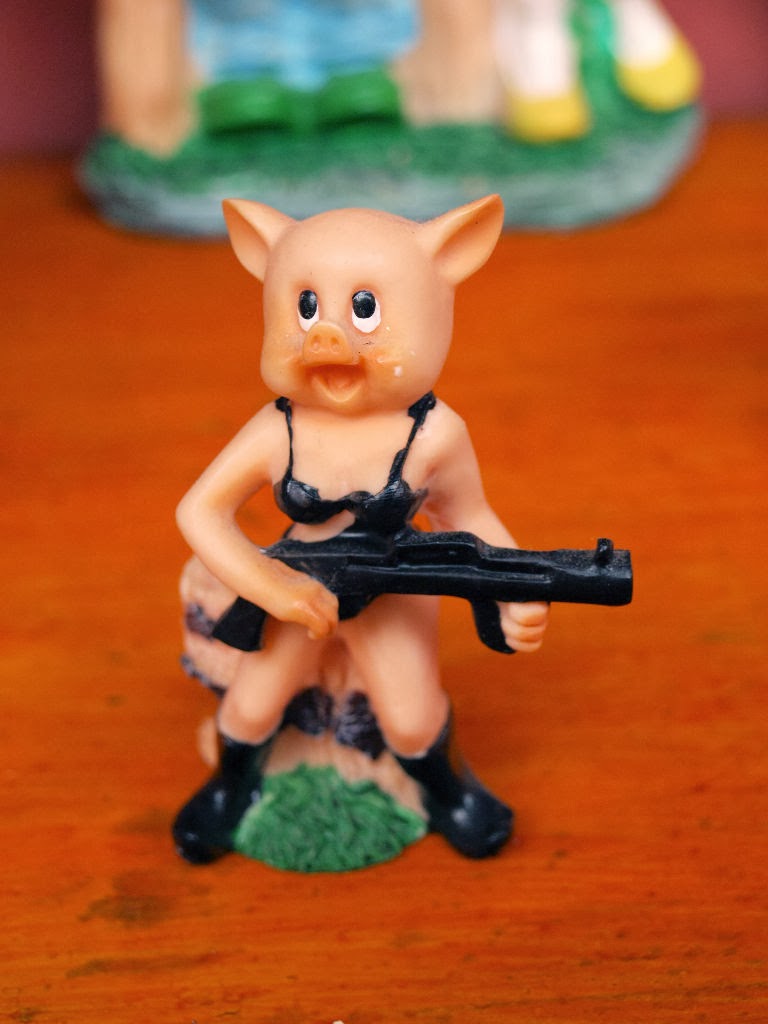 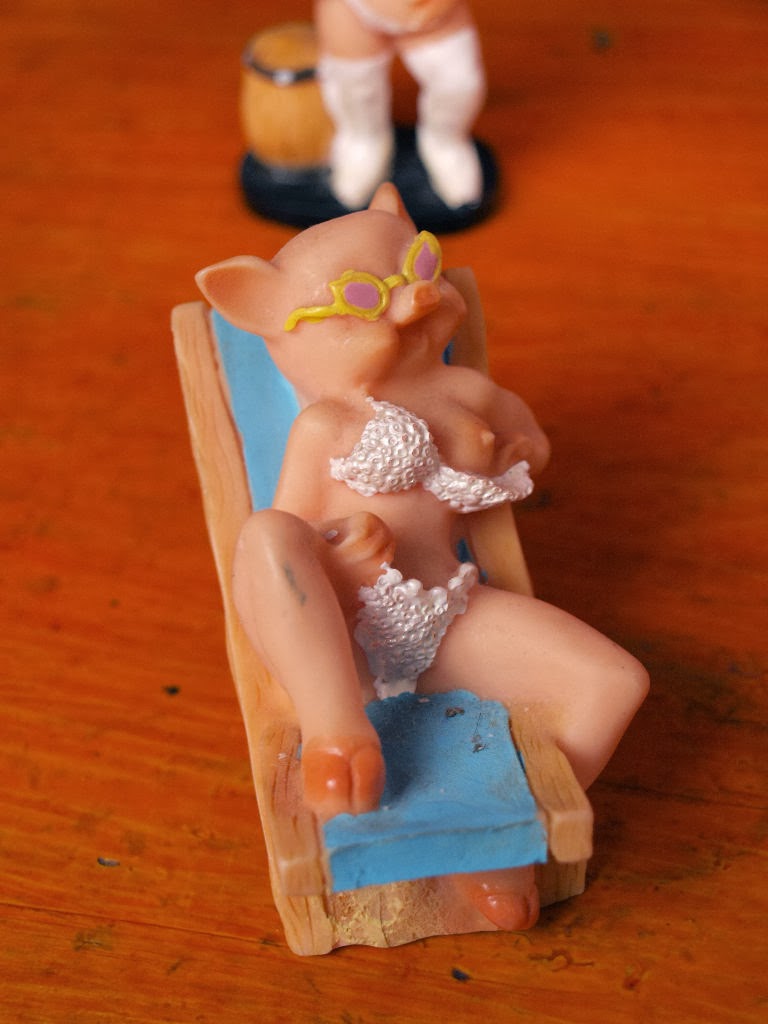 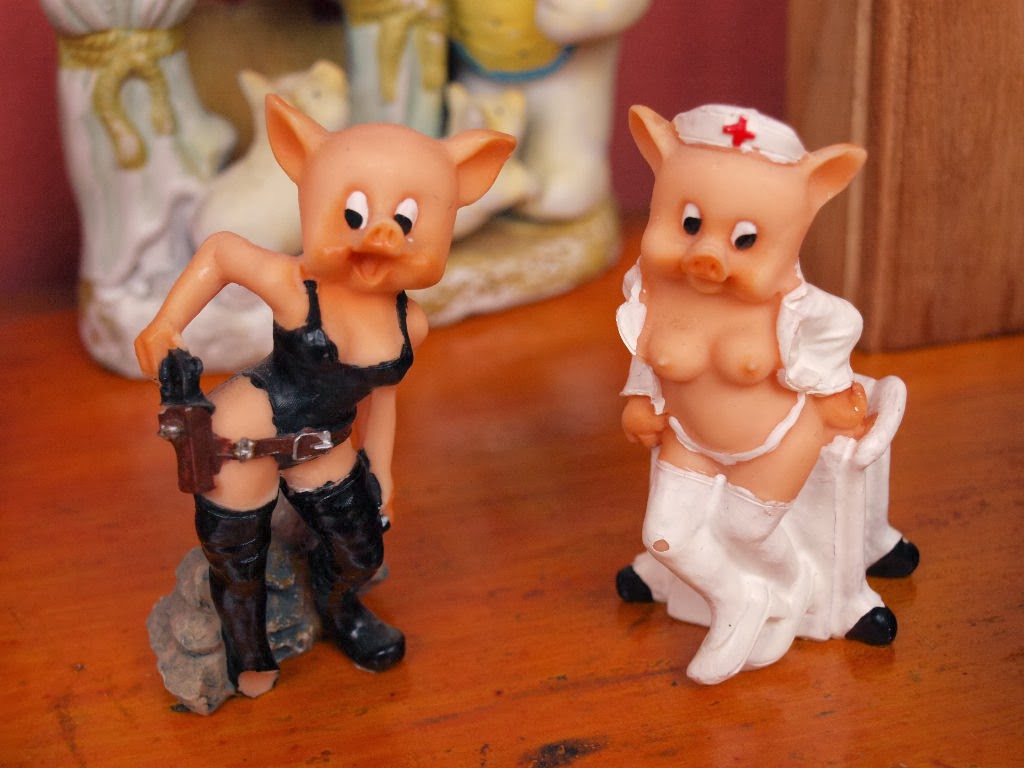