San Pedro de Atacama is a small town of some 5000 people in the middle of the Atacama desert. It's also one of Chile's main tourist draws which is clear by the amount of tourists hanging around town. We got slightly lost riding into town and ended up in the desert on the other side of town, but we ended up finding our way to a campground that wasn't too expensive at $5,000 pesos per head. Not too expensive for San Pedro anyway as it is known for being a very expensive place.

We were absolutely knackered by the time we got to the campground. It had been a long day for us after doing the Paso de Jama and all I had on my mind was to get some food in my belly and a bed to sleep in (well, a mattress in a tent). We cooked a quick risotto and headed straight to bed. Because it had been so hot when we had arrived, we had put up the summer tent, not realizing that as it is a desert the temperature drops significantly when the sun goes down. By the early hours of the morning I was so cold, but even then we were too lazy to change tents so I endured two more nights like this, albeit wearing slightly more layers.

The next day was a lazy day. We just walked around town, updated our blog, Mark had to make a phone call to his bank in Australia as he apparently had been a victim of fraud on his credit card. But in the afternoon we jumped on the bikes and headed out to a place called Valle de la Luna. The Valley of the Moon is named after its lunar-like landforms eroded by years of flood and wind. It is truly a beautiful place with its surreal lunar landscape that often looks like it is covered with snow when really it is salt, and the ring of volcanoes in the distance. We rode around a bit and climbed up some sand dunes to get a great overview of the valley. It is 'the thing' to come here and watch the sunset, so together with a number of other people we watched the sun go down from the top of a mountain ridge, which was pretty spectacular. We had come prepared with a cheap cask wine in hand. We seemed to be the only ones who had had this idea which made us feel a little bit like alcos...oh well. As the sun set over the valley, the sky turned purple and the rock an intense gold.

On the way back into town we encountered one of the worst nightmares known to man - Chilean dogs. As we turned a corner and were riding down a small street, a pack of dogs saw red when they saw us. They ran after us like they were possessed, teeth bared, barking like the rabid mongrels they were and biting at our ankles. This scenario is pretty much a daily occurrence in Chile so we weren't exactly shocked, that was until the most aggressive of the dogs launched itself at Mark's leg and bit him! We got back to the campground and had a look at the damage; it was minimal but I still convinced Mark to wash it and then come with me to the medical clinic. As Chile is a country with rabies I didn't want to take any chances. Mark followed reluctantly but we made it to the clinic where the nurse had a quick look at his leg and said that it was nothing to worry about as it hadn't drawn blood. That was a relief but served as a nail in the coffin for my hatred of Chilean dogs. Now, I consider myself an animal lover, but when it comes to these f@#$ mutts, I'd be glad to line them all up and shoot them with a shot gun. With a smile on my face.

The following day we rode about 60 kms south of San Pedro to Laguna Chaxa which sits on the edge of the Salar de Atacama. It is an oasis of birdlife in the middle of this dry place with not one, but three species of flamingo plus various other birds. There wasn't a whole lot of flamingoes there at the time but it was still pretty cool to see them standing in the shallow water on their stick-like legs fishing for shrimp.

After here we rode to Laguna Cejar which has such a large salt content that you can float just like in the Dead Sea. On the dirt road there we stopped to help a couple of cyclists with a puncture - they had a puncture repair kit, they just didn't know how to use it! When we arrived at Cejar we were told that the water was only 19 degrees so I opted out gracefully, but Mark got changed and jumped in...well it took him a good ten minutes to actually get in the water as it was so cold and when he jumped in, he had his mouth and eyes open the fool so he came up spluttering and wiping his eyes. It was pretty funny to watch him float in the water in ways you could never do in "normal' water. When he got out he was completely covered in salt and his dreads were almost white with the stuff.

The following day as we packed up our stuff to leave, an Alaskan couple on a KLR rode in to the campground and we had a good chat with them. The guy was unbelievably heading south to Ushuaia now, which made us look at him as if he was crazy (nb. it is going into winter down there now) but as he said, he was from Alaska so he was used to the cold. I bloody hope he is - we were there at the height of summer and it was snowing! Walter whom we met in Salta also came by to see us, we had seen his campervan parked in town the previous day and left a note on his windscreen telling him to come see us as we still had his giant screwdriver that he had lent us in Salta. We said our goodbyes to these guys and headed out on the road, headed for Calama. 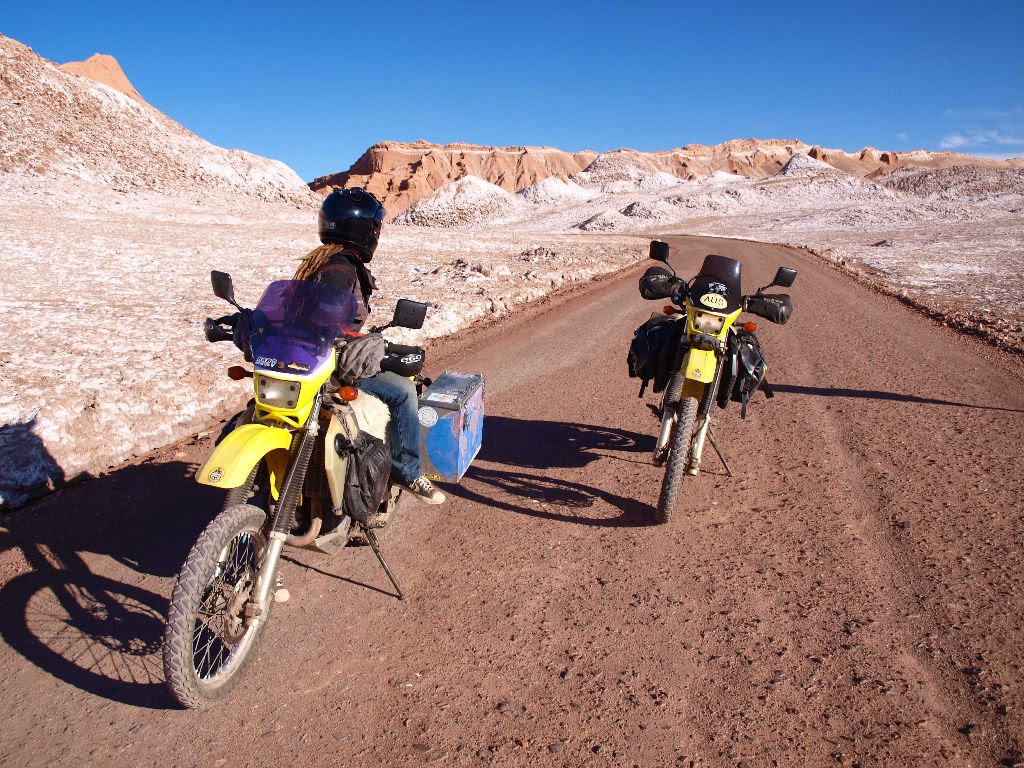 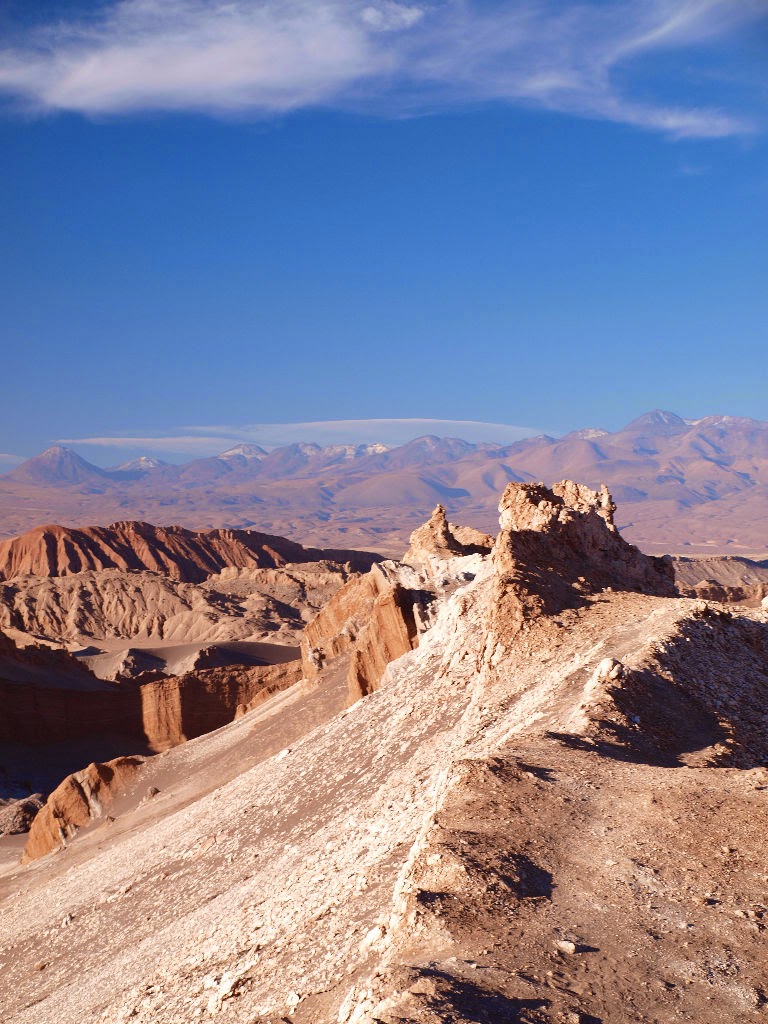 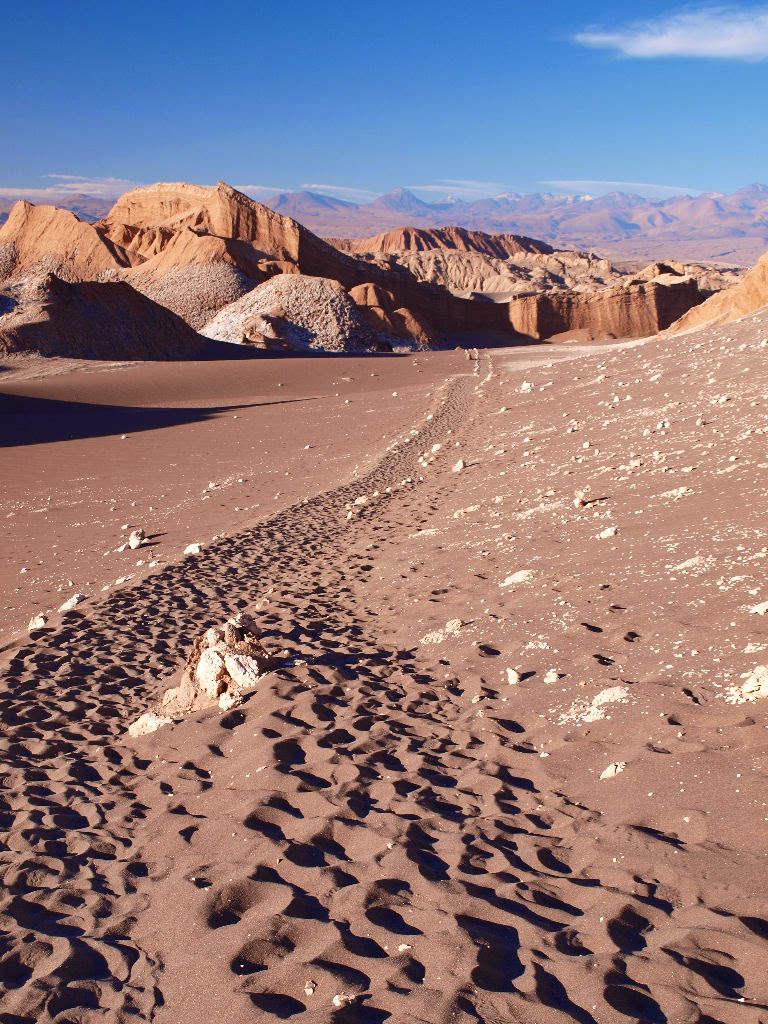 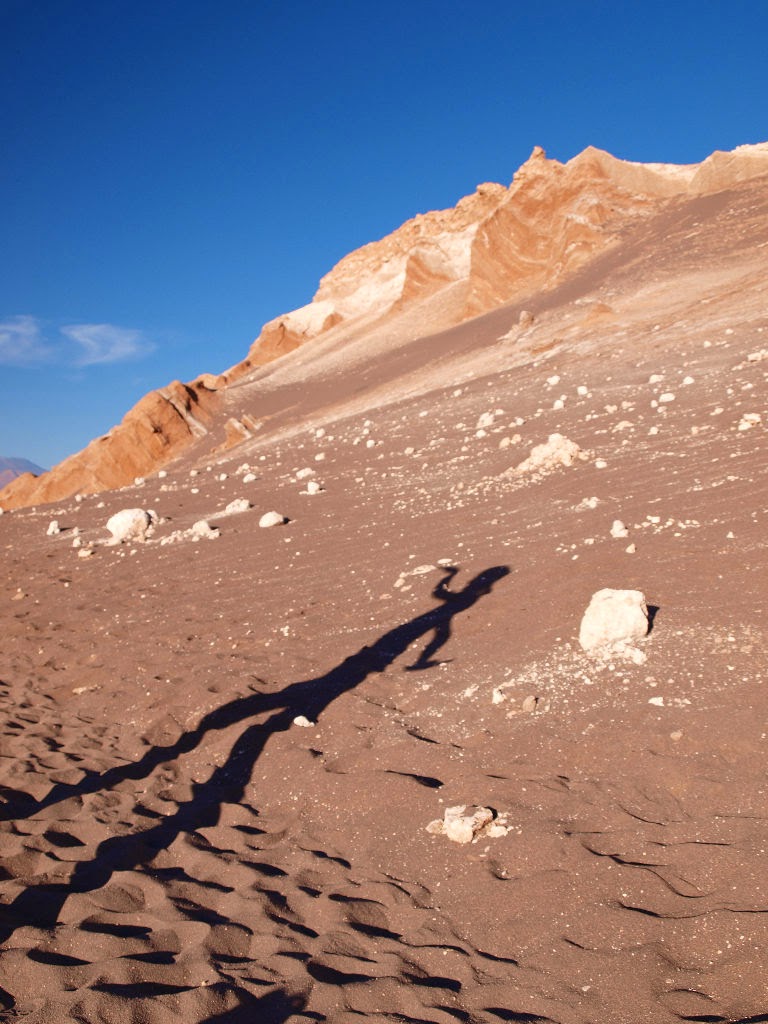 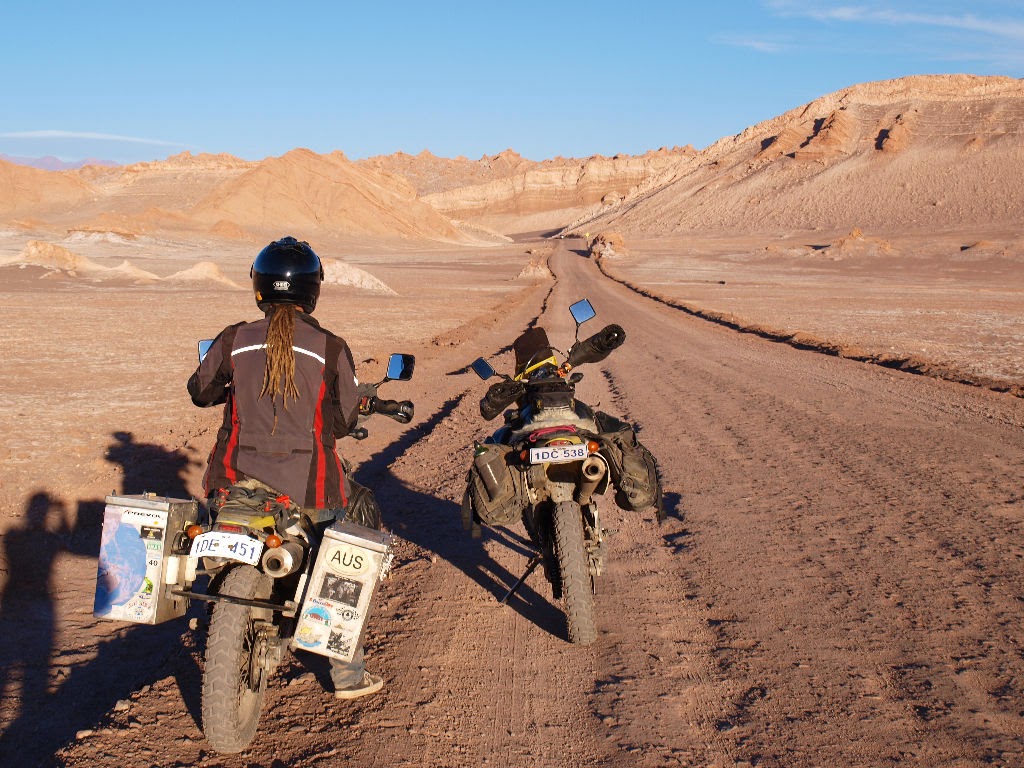 Walking on the ridge, trying to find a good spot to drink our wine 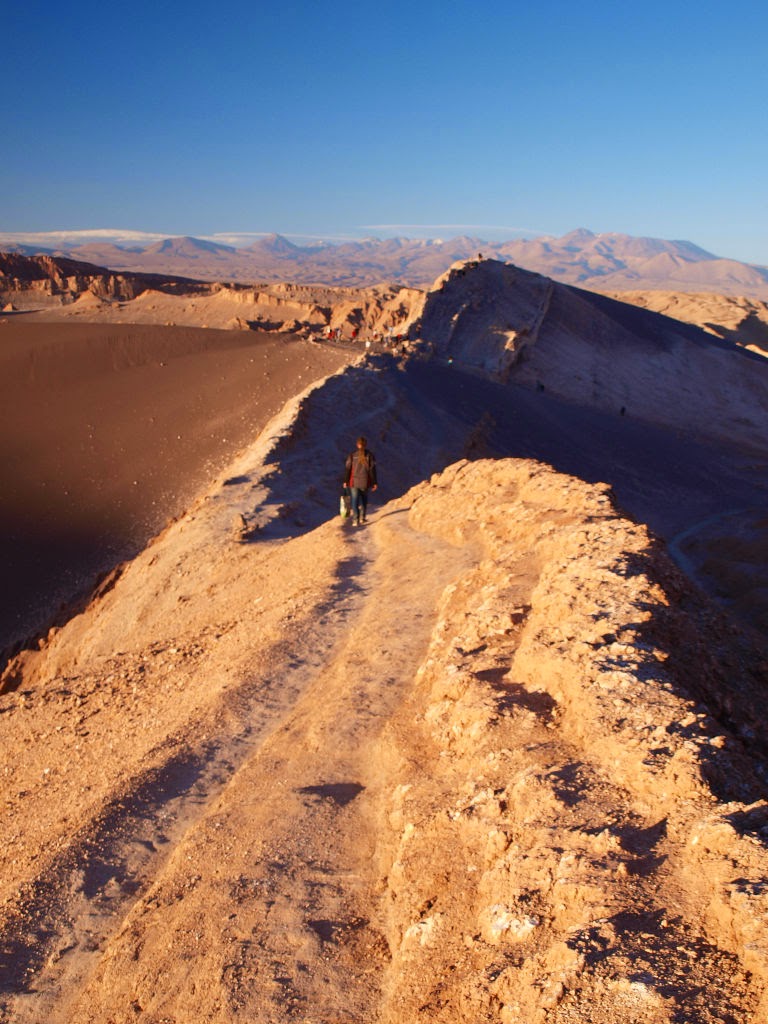 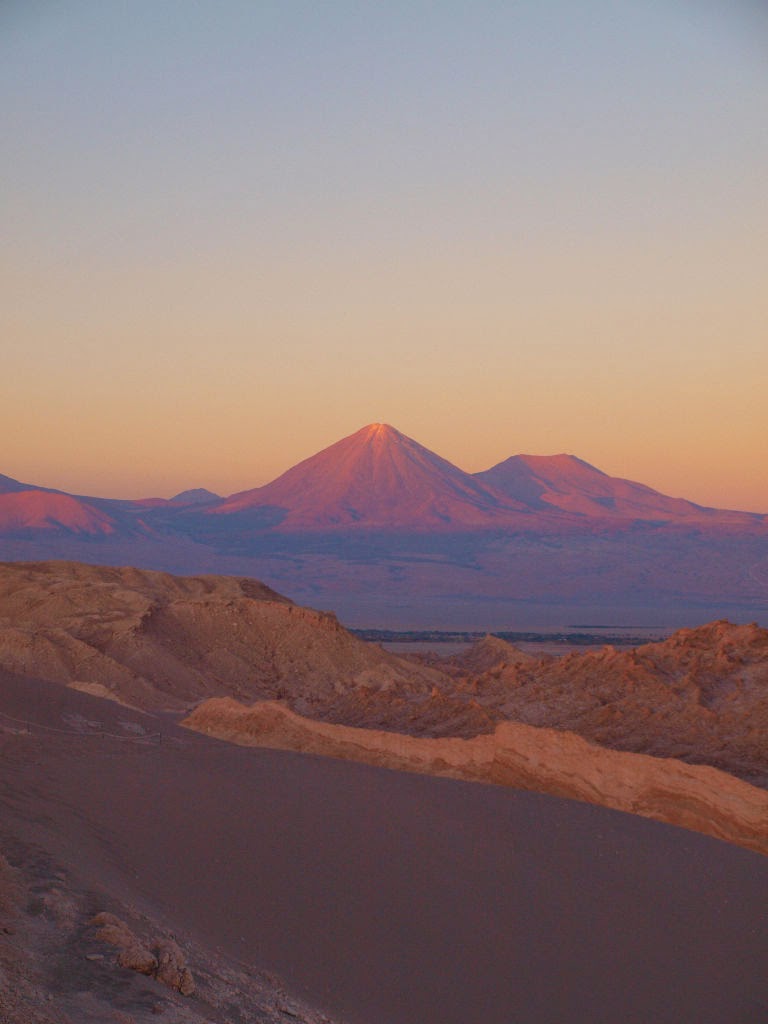 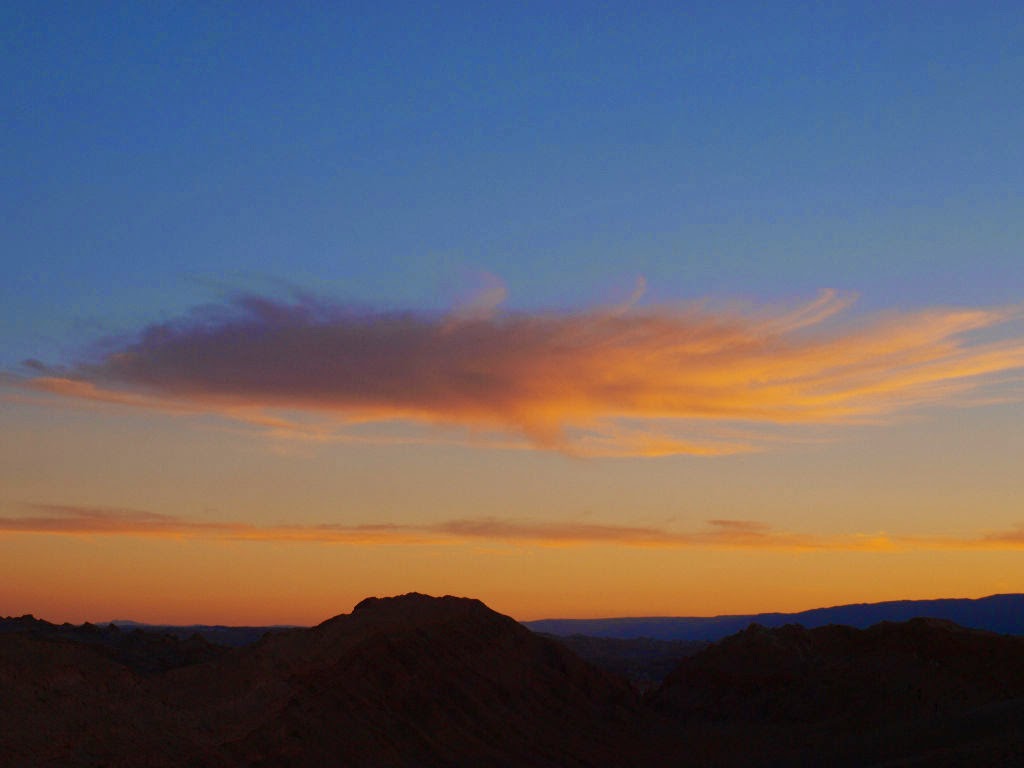 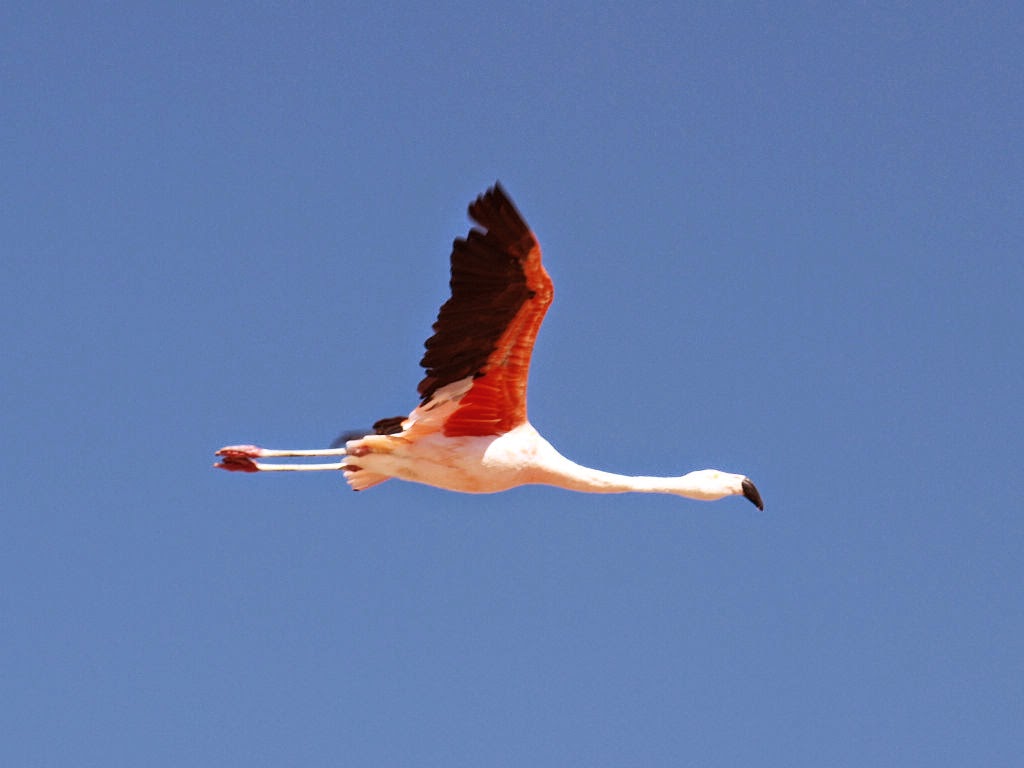 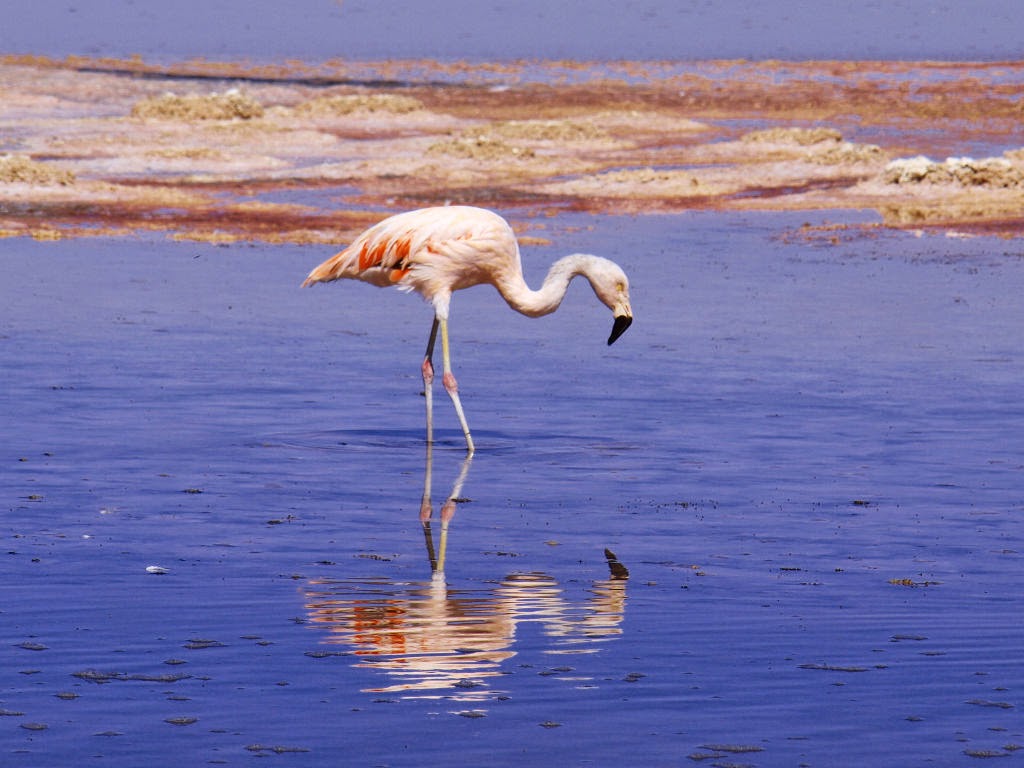 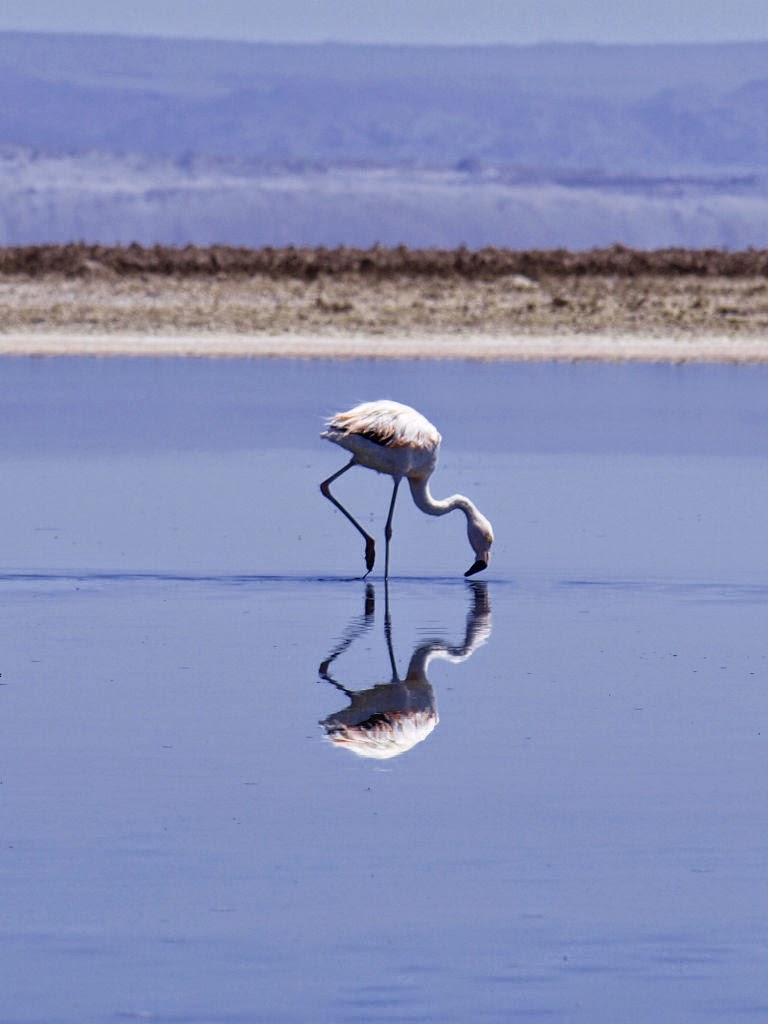 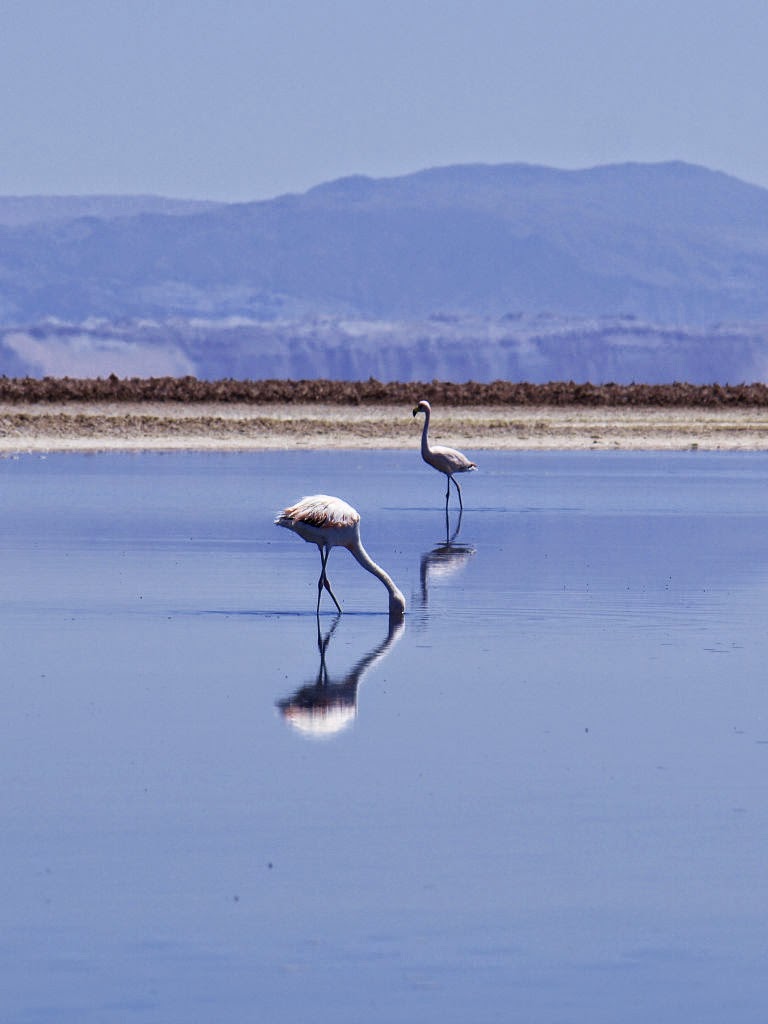 Found a little lizard that was shedding its skin 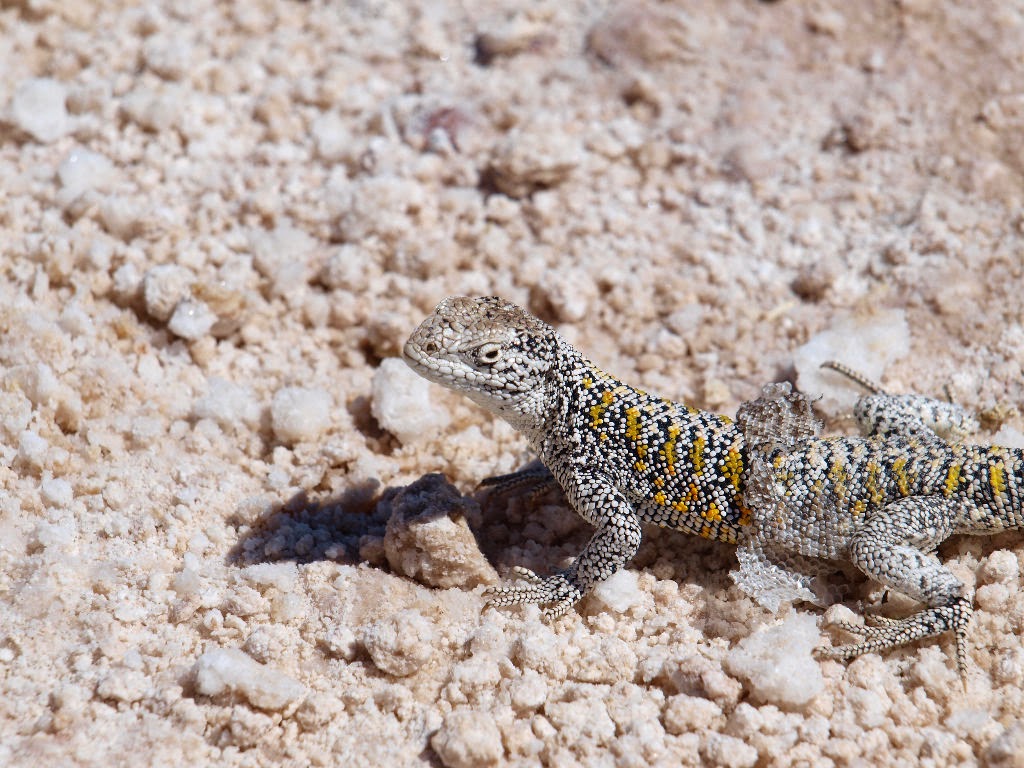 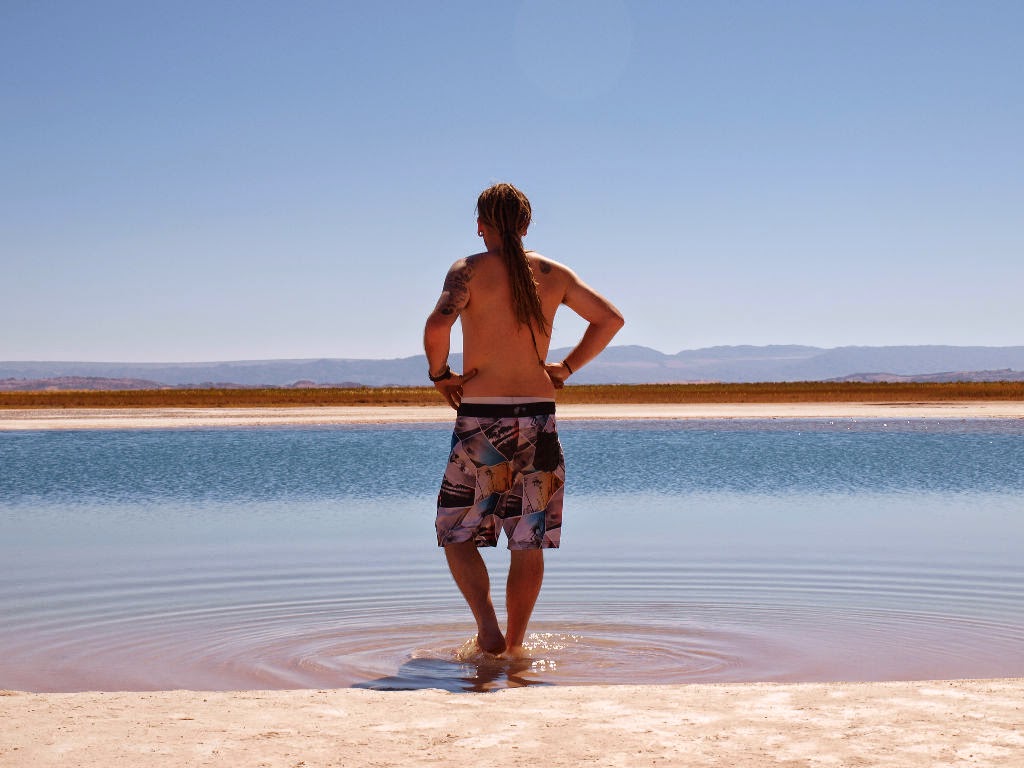 That's one way to dive in I suppose 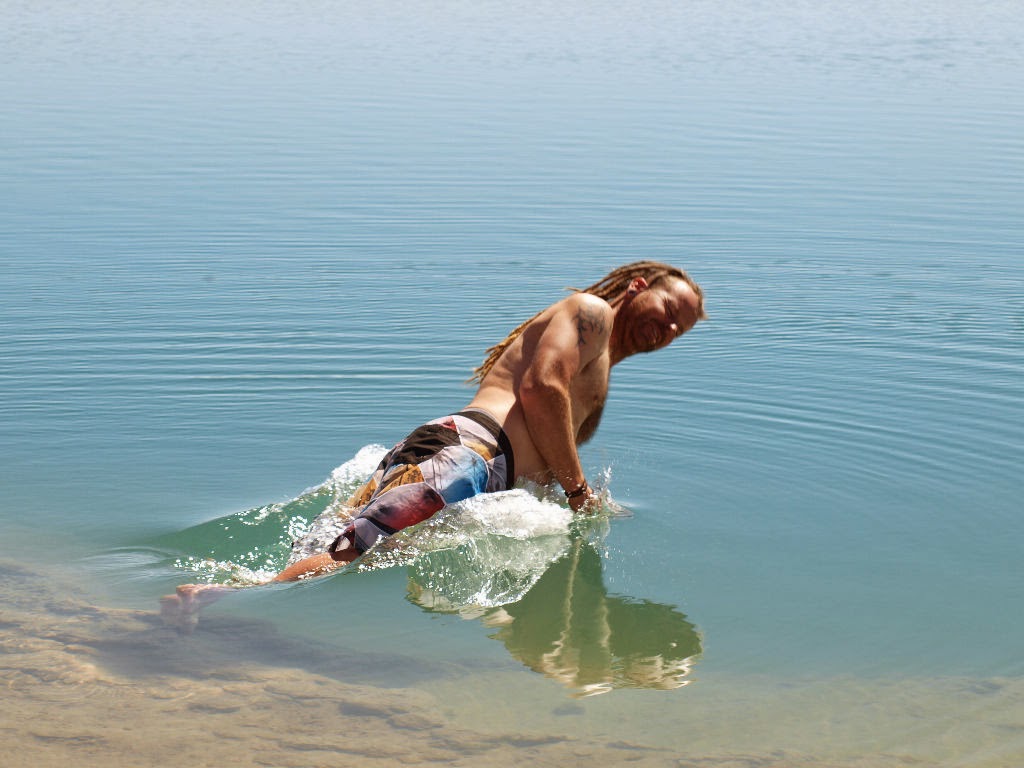 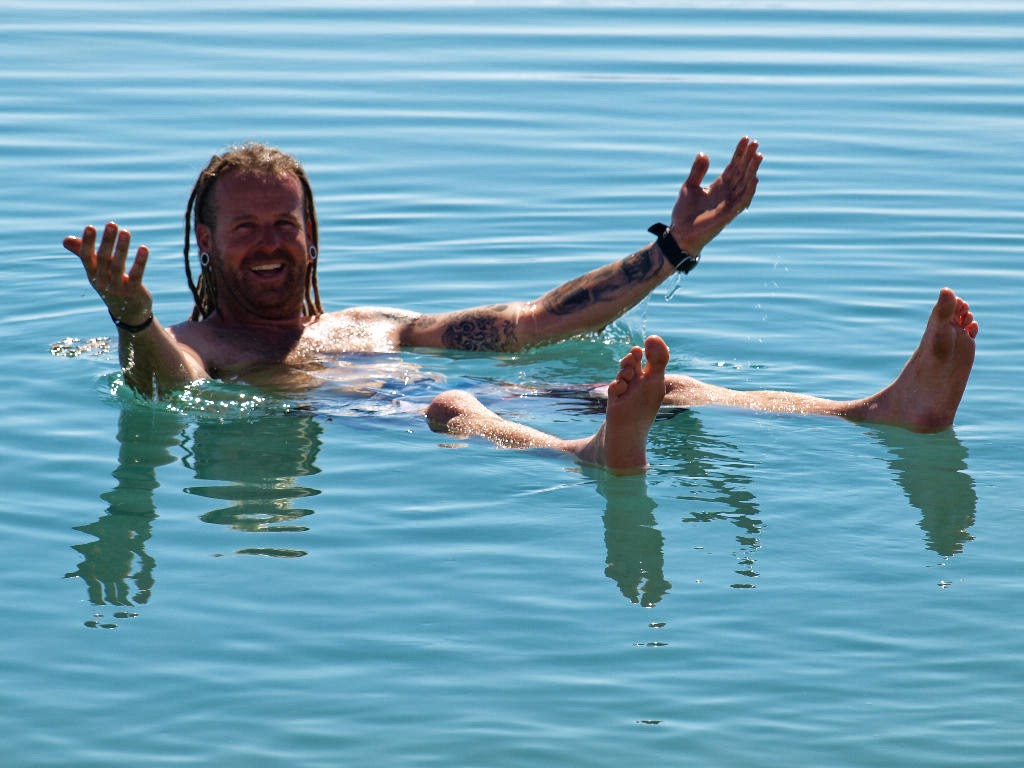 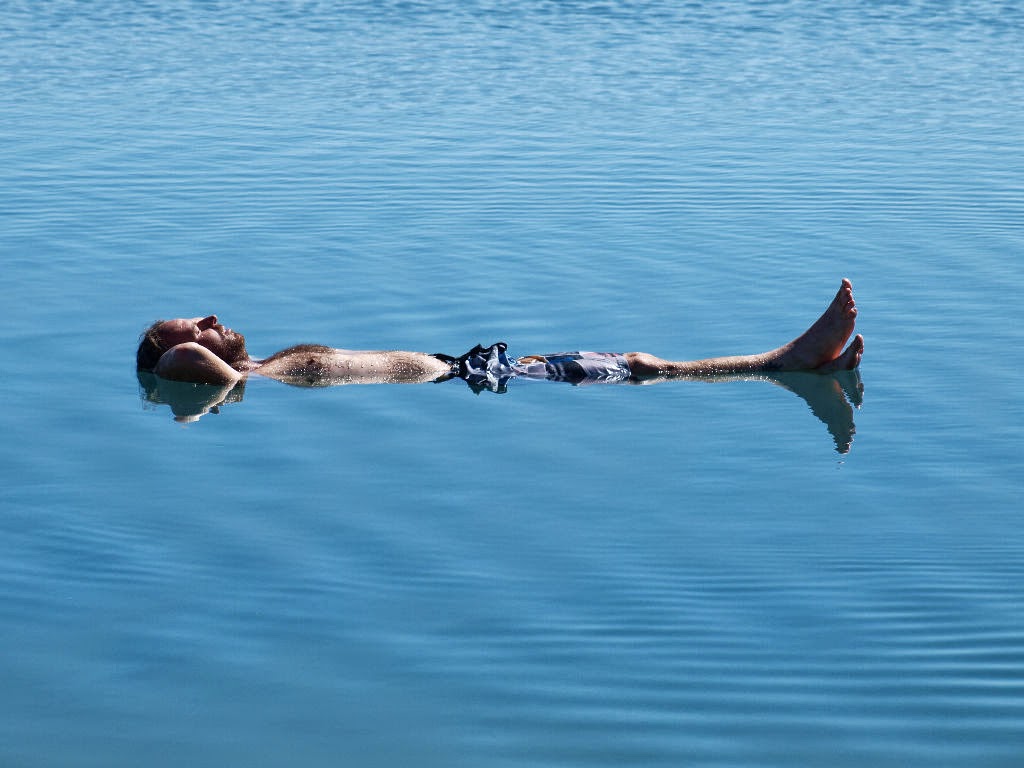 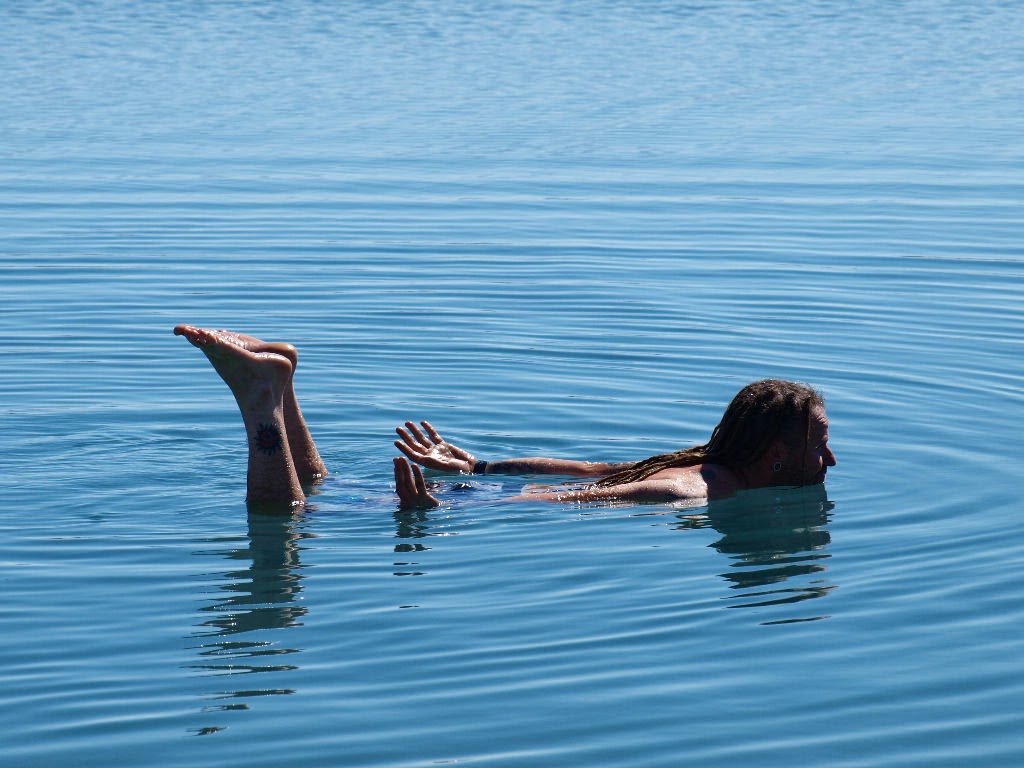 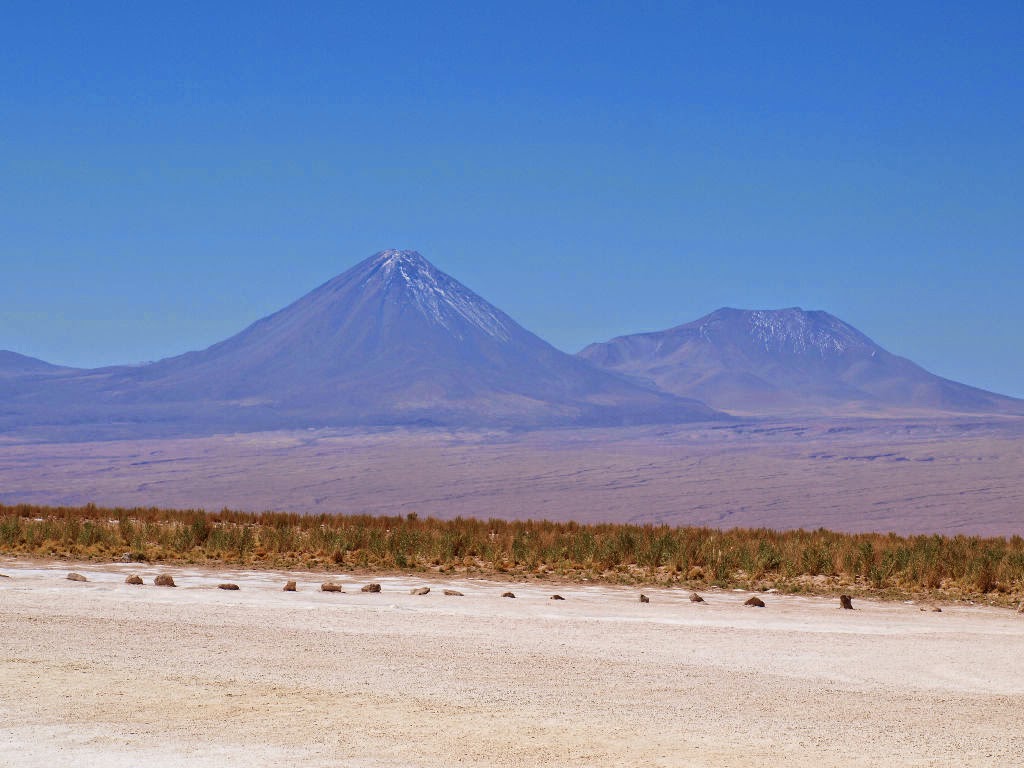 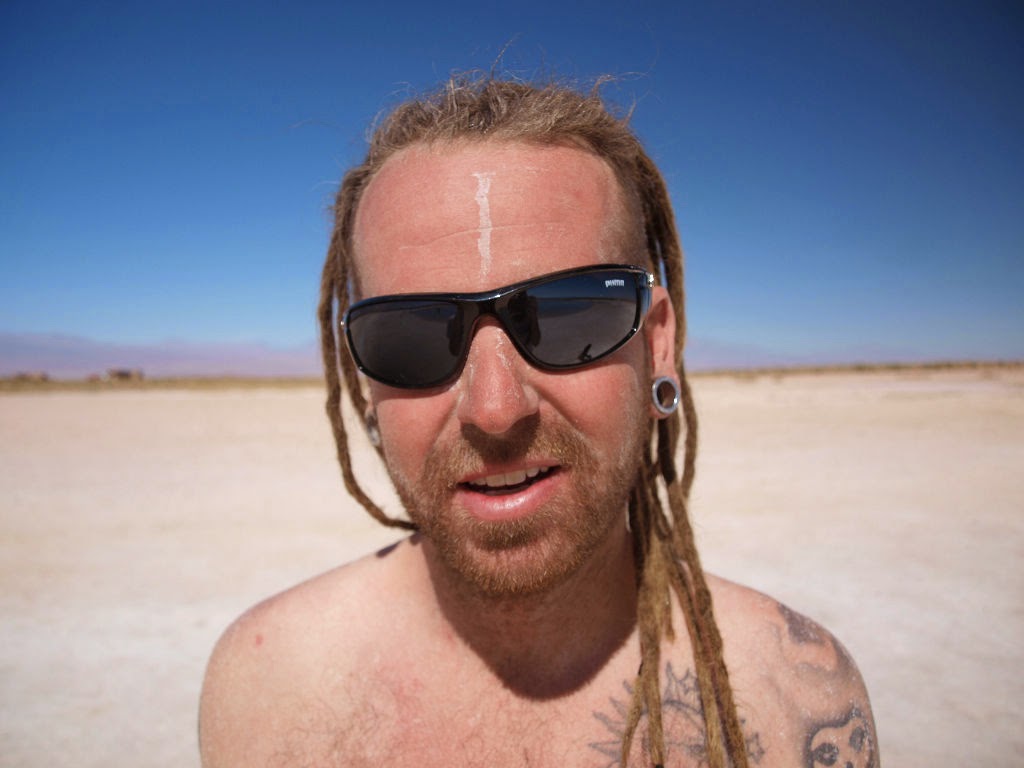 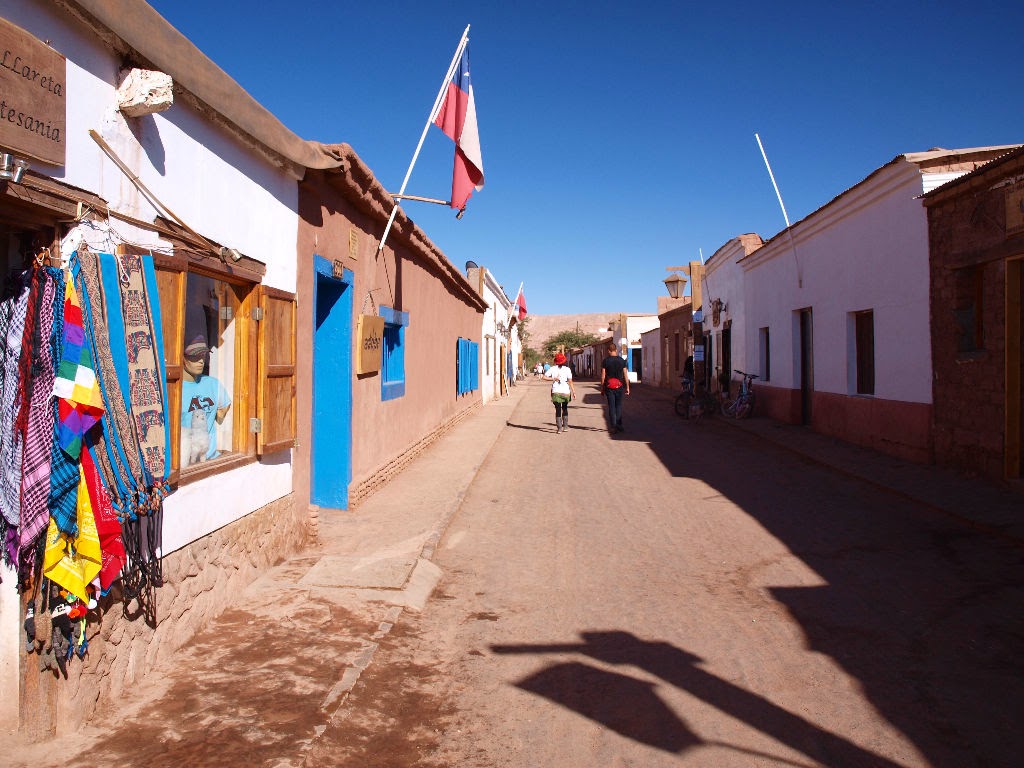