We left Uyuni after a great introduction to Bolivia and excited about seeing more of the country.
It was only about 200kms to Uyuni and a lovely ride that took us on quiet roads over the altiplano where the only other life was llamas and vicunas (a cross between a llama and a guanaco). The land here is so high and dry and therefore not much can survive here.
Potosi sits proud at 4000m and is therefore the highest major city in Bolivia. Potosi was founded in 1545 by the conquistadors (the Spanish invaders) when they discovered the Cerro Rico a 'Rich Hill' full of silver. Soon the silver extracted from here was bankrolling the Spanish empire. Even today, something very lucrative is said to vale un Potosi (be worth a Potosi). Although the silver has more or less dried up, the ore is still being extracted by miners in some apparently abysmal conditions imaginable. It is possible to visit the mines, however we didn't.

The traffic was pretty hectic when we rode into Potosi and between that and having to navigate around the narrow, steep street was a wake-up call to be on our toes again, after so long time spent outside cities. We found a cheap hotel though where we stayed two nights while we discovered the city. The old part of town is really pretty with old colonial buildings and we feasted on the best empanadas/saltenas/tucumanas known to man, sold on the main square AND they were actually vegetarian with soy meat! We also found a local vegetarian restaurant that was super cheap which we ate at. Our impression of Bolivia from a food viewpoint is that it is easier to eat as a vegetarian compared to both Argentina and Chile. And the supermarkets here are much better stocked as well, surprising seeing as Bolivia is a much poorer country than the two others.
Thankfully neither Mark nor I had any real problems with altitude sickness (not to mention the bikes which didn't miss a beat) but walking around it was a bit easier to get out of breath. Then it was good we had our bag of coca leaves which we would chew on regularly. Apparently locals use coca mainly to wake up in the morning and to lose wait as it curbs the appetite...

ON to Sucre....
Again this was another 200km easy ride, this time dropping to an altitude of around 2500m. It was a Sunday so the streets were really quiet which made for a 'tranquilo' ride in. We steered our bikes to the French Honorary Consulate where our friend and fellow motorbike traveller Tim was staying. It is the home of the French Consul, Christophe and his family and he rents out rooms and studio apartments. We had decided to stay in Sucre for 1 month to study Spanish as Sucre is one of the best and cheapest places in South America to do this. We started our lessons at the Sucre Spanish School the following Tuesday (Monday was not an option as we were both lying low after a big session of welcome drinks with Tim on the Sunday night, lesson learnt - do not mix red wine and vodka). So on Tuesday I started lessons with Edwin and Mark with Maria. We decided private lessons was the best option as we were on two quite different levels of Spanish. It cost $6 per hour and it was definitely money well spent. It was actually nice to be a 'student' again for a change and we threw ourselves headfirst into student life and what comes with it, like: alcohol, alcohol, alcohol...

In between sipping Caipirinhas and building up a considerable stash of empty wine bottles, we had a great time soaking up the great atmosphere of Sucre aka The White City because of its collection of almost all white buildings. It was declared a Unesco World Heritage Site in 1991 and is the constitutional capital of Bolivia (La Paz is the de facto). It is recognized as the most beautiful city in Bolivia which I can only agree with although I haven't seen all of Bolivia. It is also a huge centre of learning with several universities and many schools - I don't think I have ever seen so many kids in one place as Sucre. People are super friendly and within days Mark and realized that we LOVED this city.

I gotta say that before we came to Bolivia we were "warned" by many people that Bolivians were not very nice and very rude. Well, I can say with full honesty that the people we have met in all of Bolivia have totally managed to dispel that reputation. They are some of the nicest people I have met on this entire trip. Smily and helpful and the kids have got to be the cutest looking kids on the planet. I love how the indigenous culture is still so visible in the streets, I love the colours of people's clothes, the markets with the wide variety of fresh fruits and vegetables and all the street vendors selling oh so tasty food. Oh, and especially for Sucre - I love the zebras. Yes, zebras. Every morning and every afternoon every pedestrian crossing in the centre of town fills up with young people dressed up as zebras and act to help people cross the street safely. They are super friendly and always wave and dance and greet you with a "Hola!" or "Como estas!" I would see them every day and every time it brought a smile to my face.

Other great things we did while in Sucre was meet the wonderful girlfriend of Tim, Ana, who came out to visit from Brazil for a couple of weeks. As they stayed in the same building we would be going to their apartment for dinners and they would come to ours. Sucre has got to be the marching band capital of the world and every single day you hear drums and trombones going off in all directions, in fact one night around midnight Mark, Tim and I were stumbling out of a pub when we ran into a marching band mixed of young guys and girls who roped us in and soon we were off dancing around the streets, arm in arm with our new friends while they were pouring rum and coke down our throats! As I said before - great people!

One Sunday we rode 60 kms south of Sucre to the indigenous village of Tarabuco that hosts a famous Sunday Market where you can buy traditional handicraft and food. I could have filled up a shipping container with stuff from there but as it is very expensive to send things back to Australia I had to contend myself with a hat and a woven blanket and some other little trinkets.

It was the 205th anniversary of the Bolivian Revolution on the 25th of May and people from all over Bolivia (and marching bands of course!) descended on Sucre for a week of festivities. Even the President Evo Morales graced us with his presence (although after having spoken to many Bolivians his popularity is waning quickly, corruption and cocaine seem to be words tied to his name).

On our last weekend in Sucre we were invited to Mark's teacher Maria's house for an almuerzo (lunch) of Papas Rellenas, a traditional Bolivian dish of cheese or egg covered by a ball of mashed potato. I can report that it is delicious! So good in fact that Mark made some himself a few days later for Tim and I, although I unfortunately was unable to eat any as I got a stomach bug (possibly from a juice in the Mercado Central) and proceeded to spew my way through dinner (sorry Tim!) and until 5am the next morning. We were meant to leave the next day but this of course had to be postponed another day. When we did finally leave Sucre after a total of 4 1/2 weeks we left behind a truckload of great memories and a city full of friendly people and good vibes.


Indulging in some coca 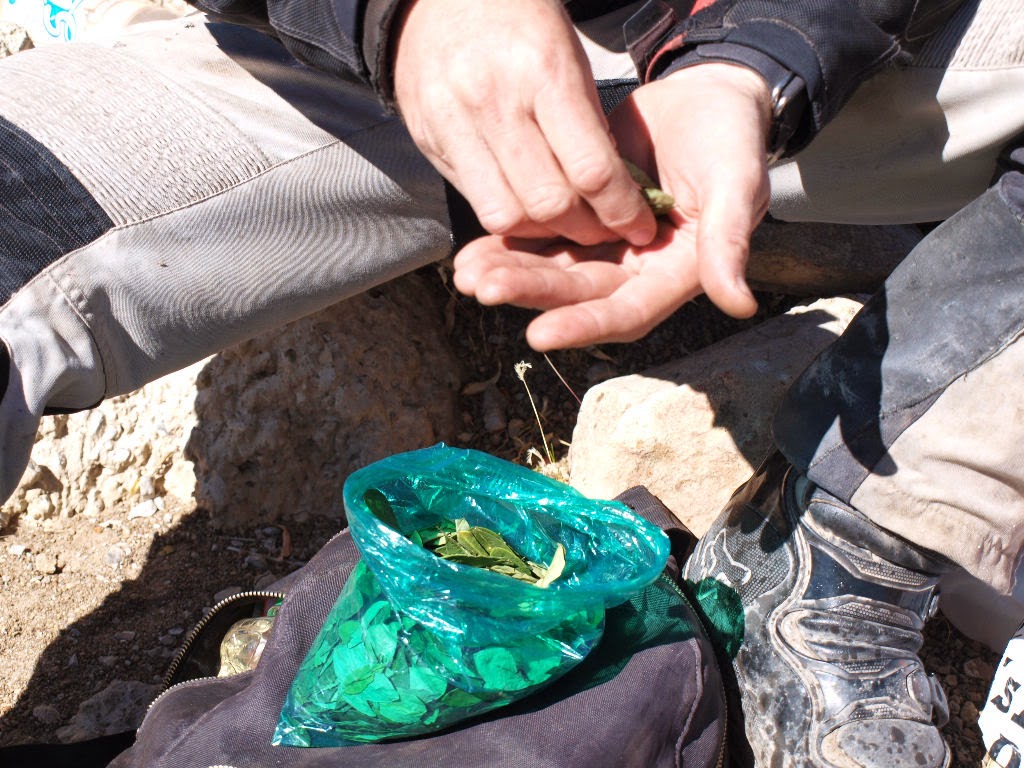 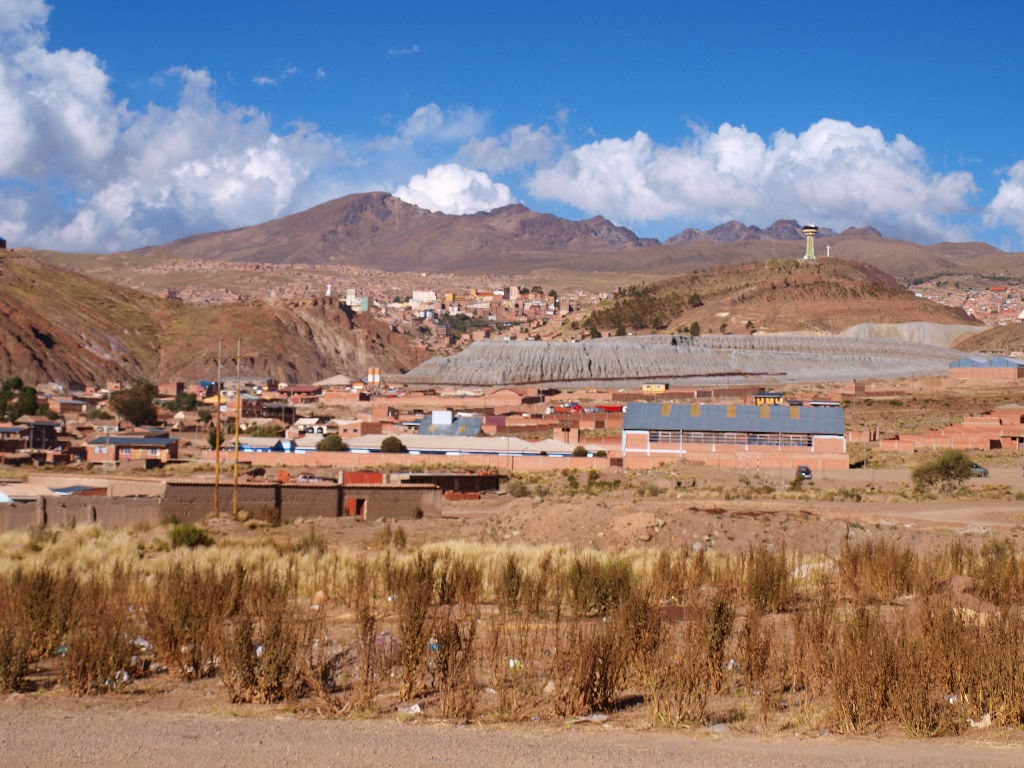 These juice ladies are everywhere, selling freshly squeezed orange juice for not even a dollar 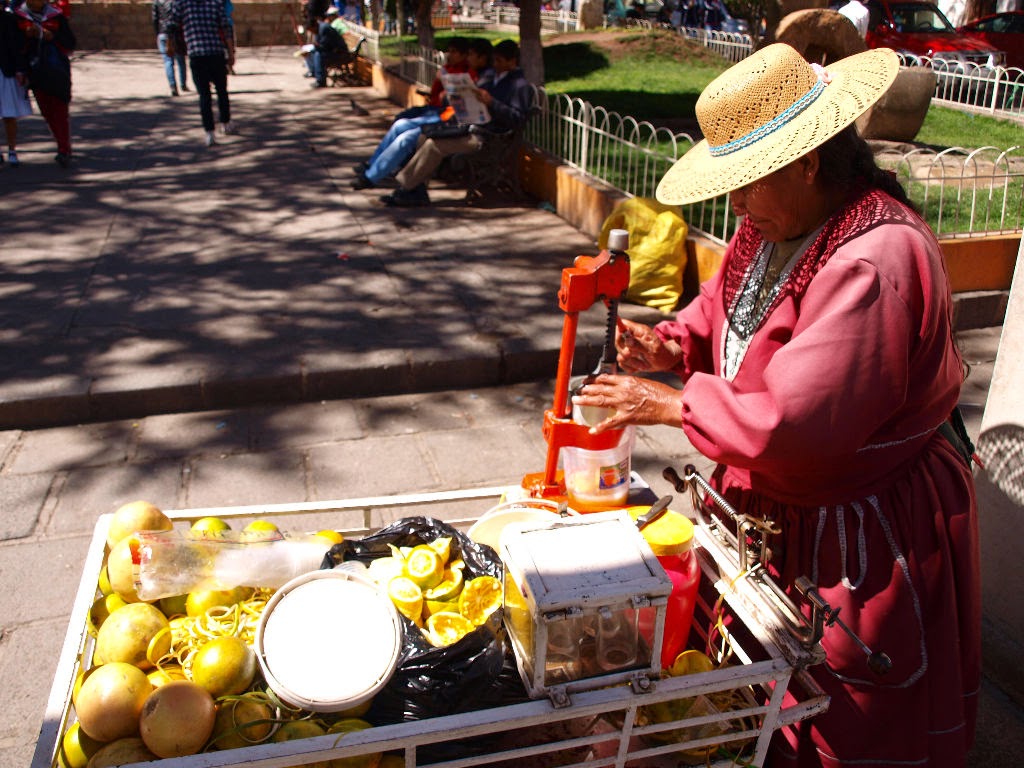 A small street an 'Cerro Rico' in the background 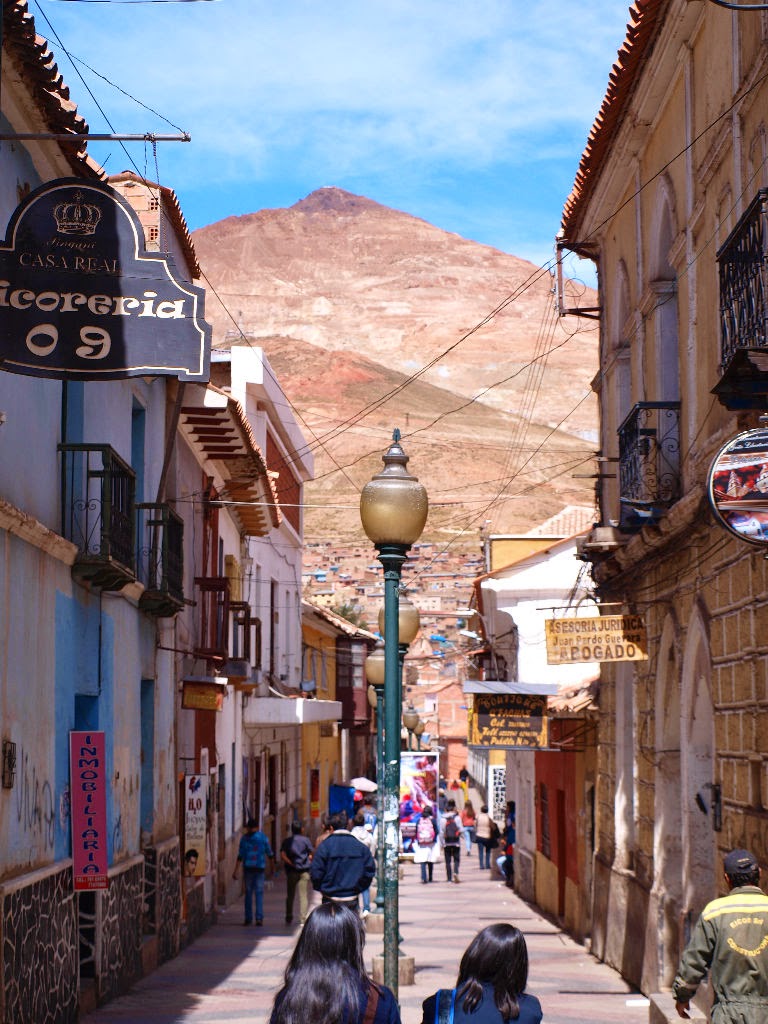 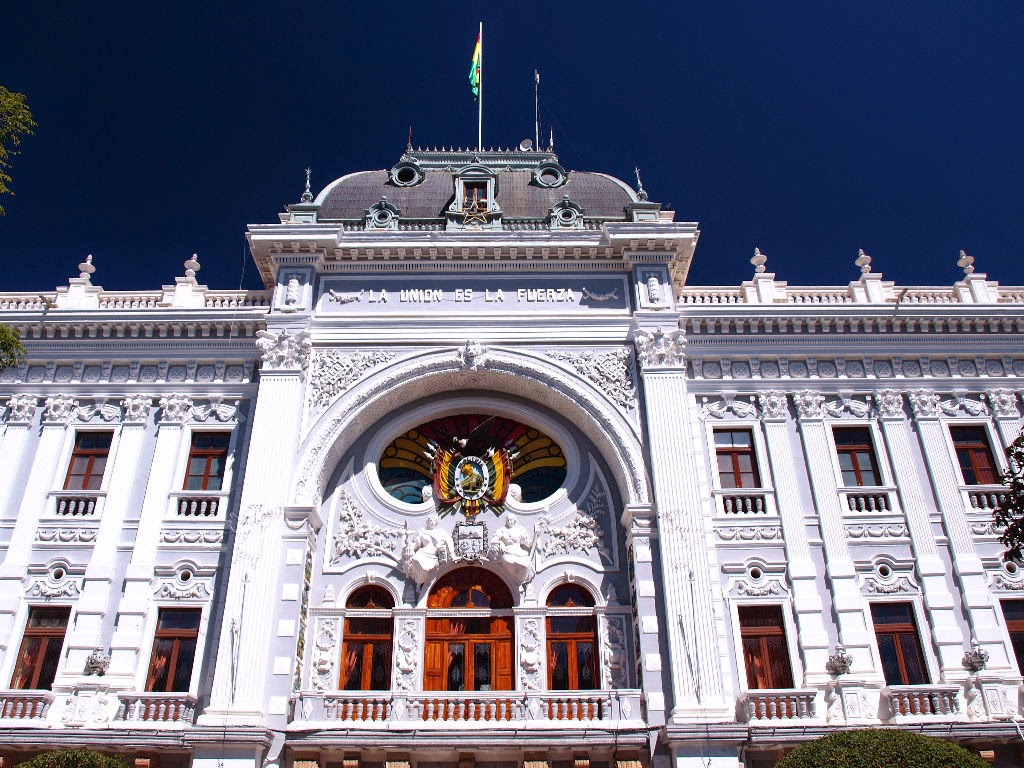 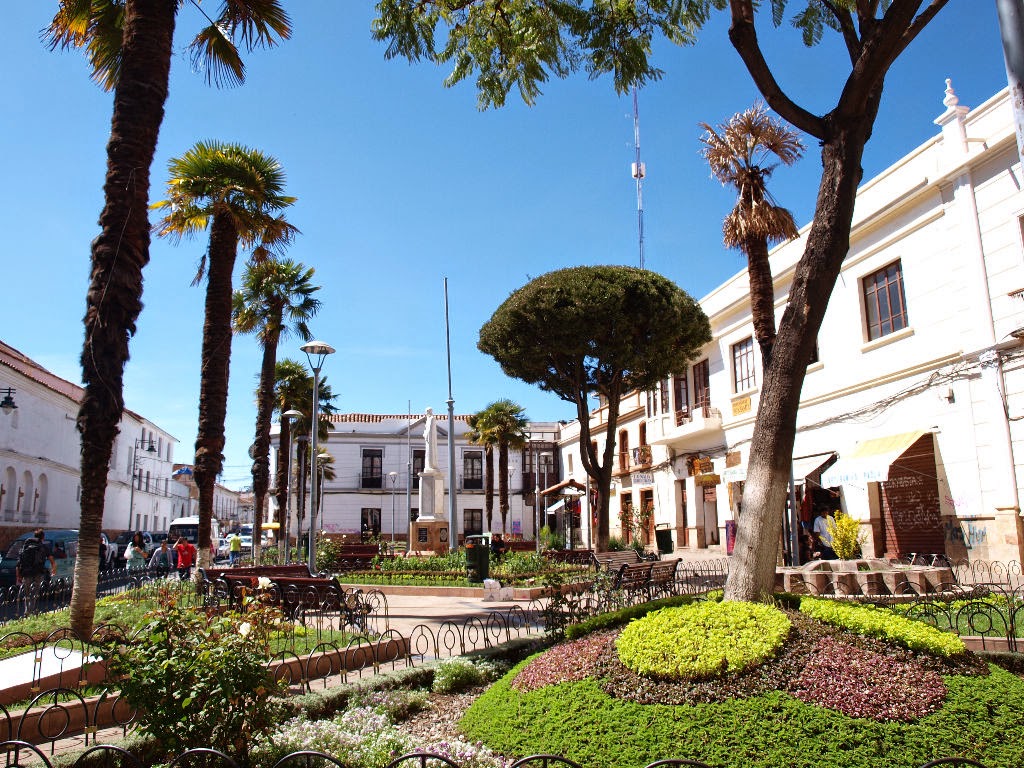 Our lovely home for over a month 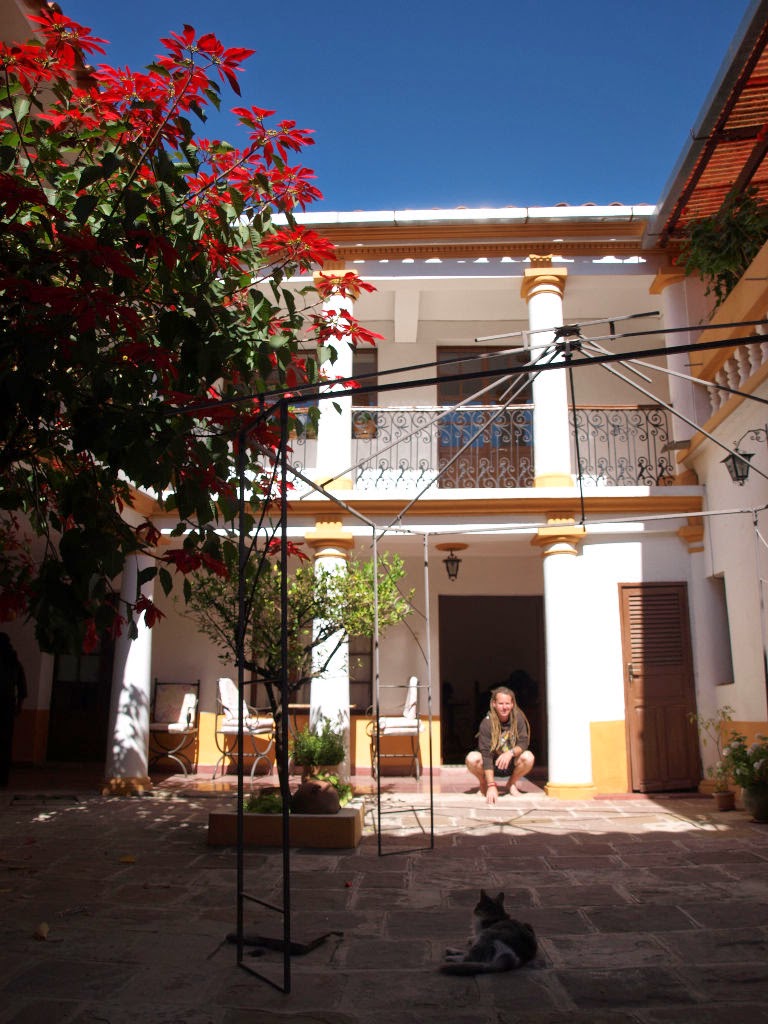 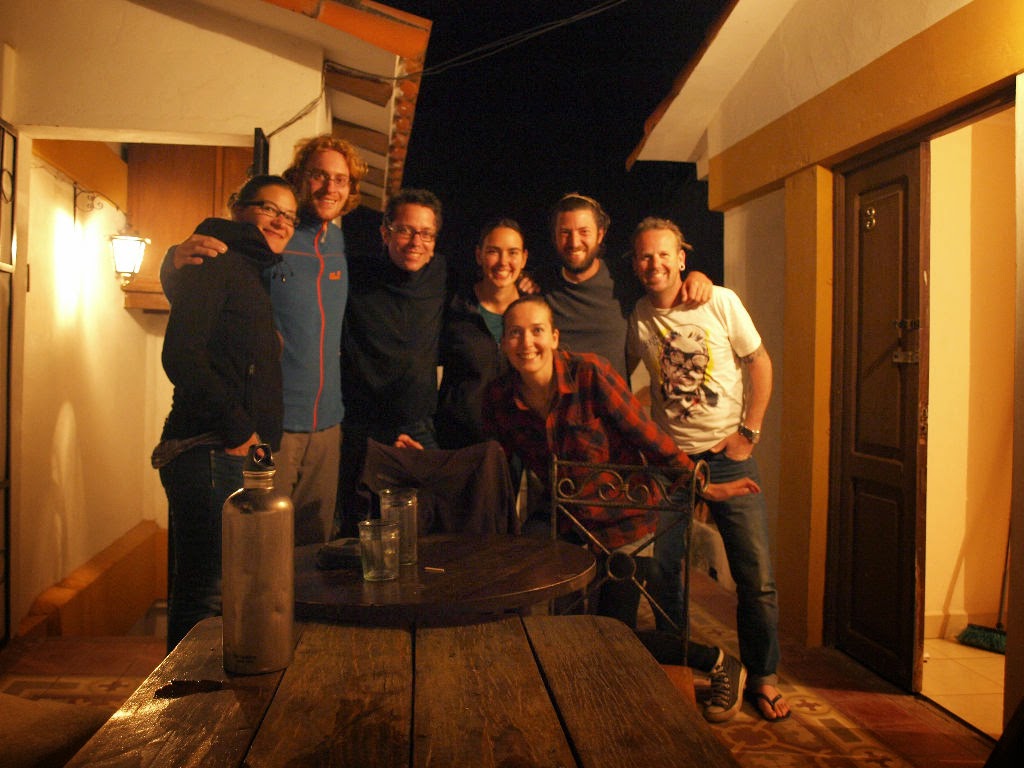 In the indigenous village of Tarabuco 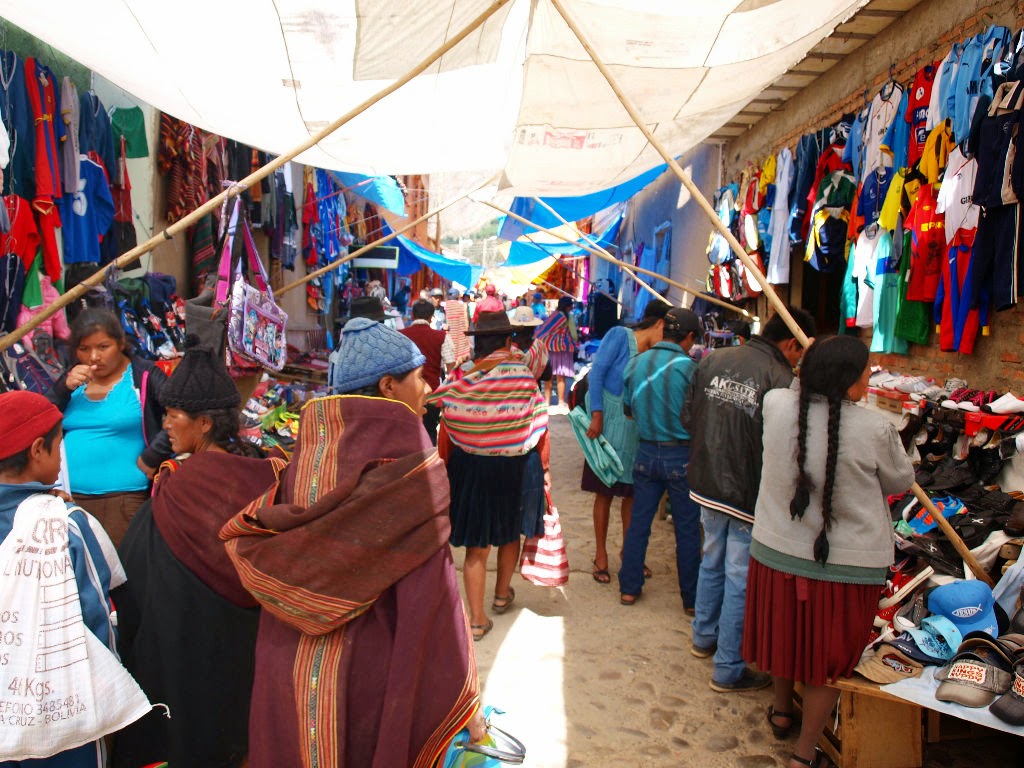 A statue in Tarabuco of an indigenous soldier standing over a dead body of a Spanish soldier -
holding the dead soldier's heart in one hand after having taken a bite of it. Ok we get the picture... 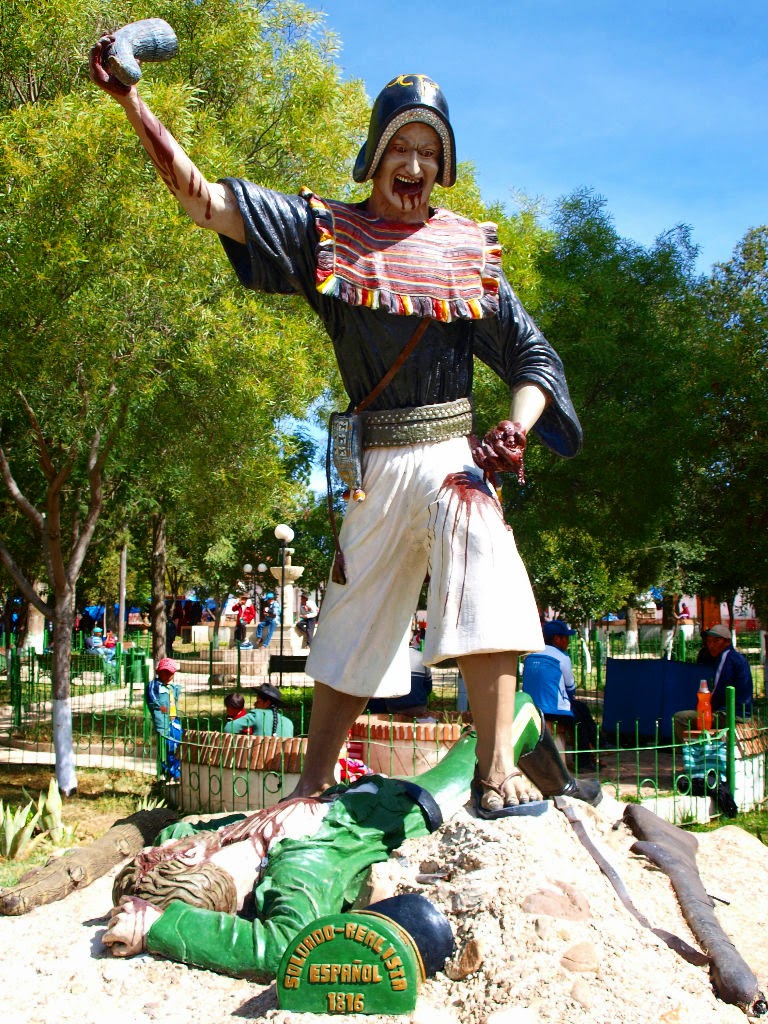 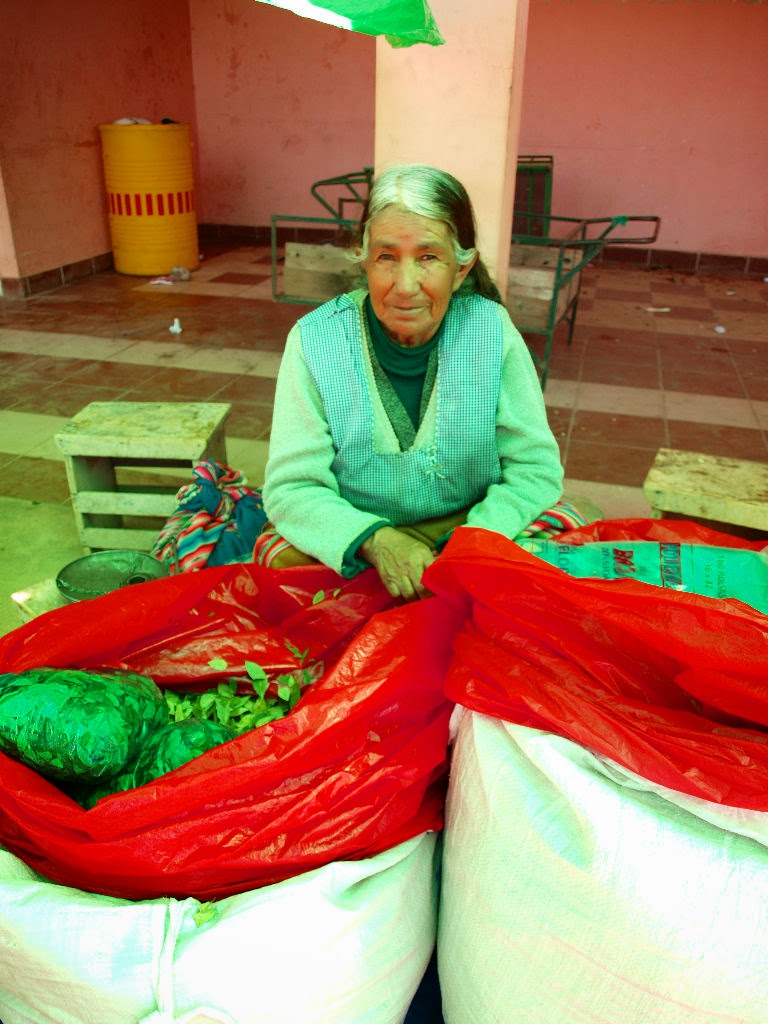 View over Sucre from the neighborhood of Recoletta 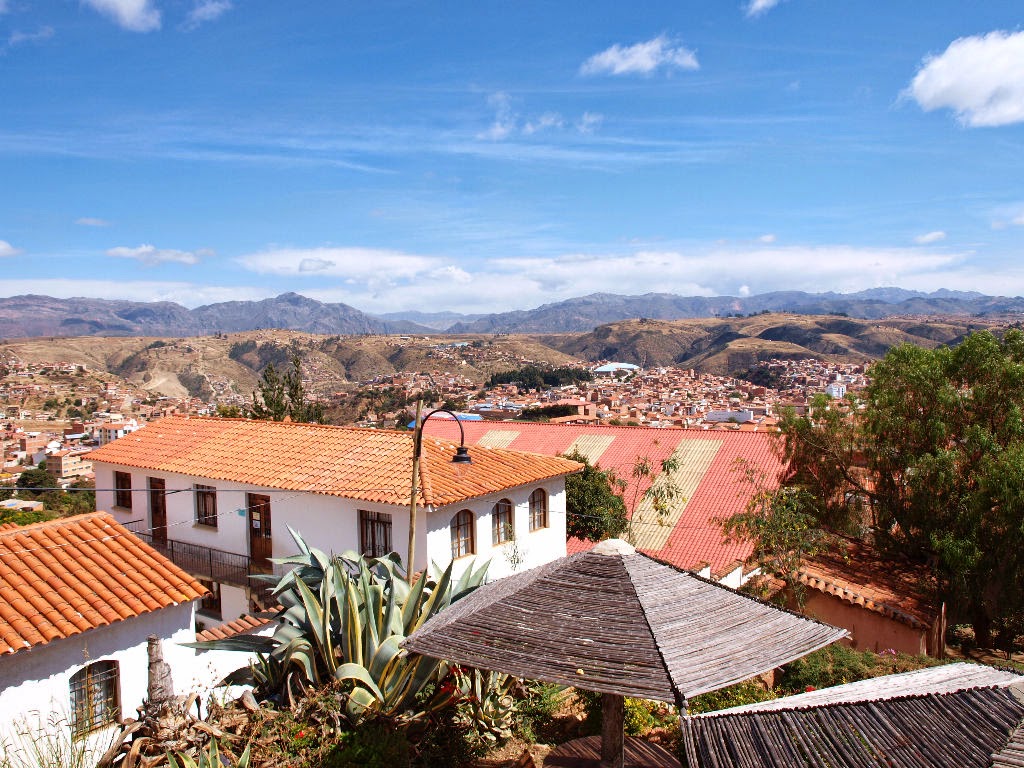 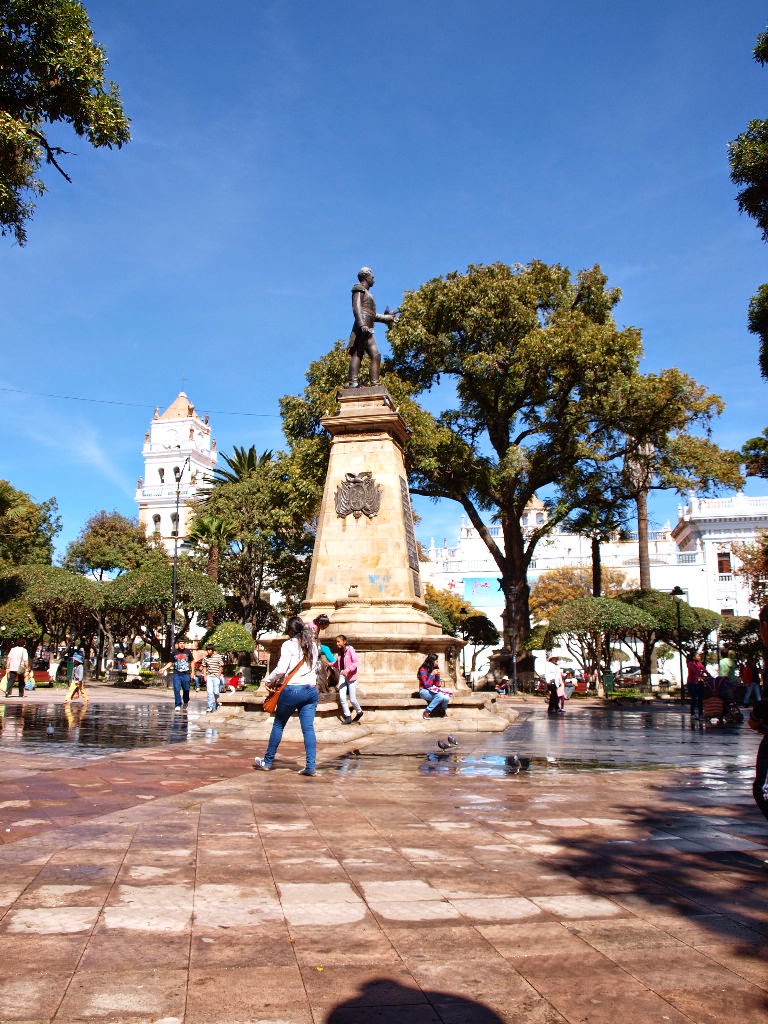 Hanging out with some local street kids 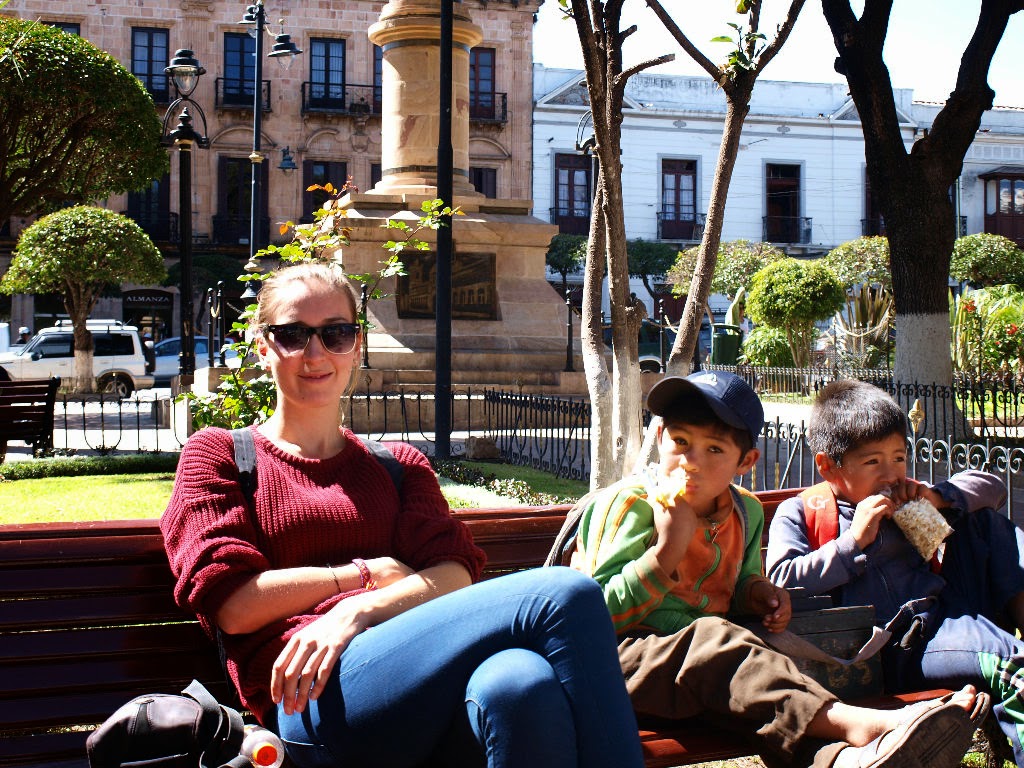 One of the many juice bars in the Mercado Central 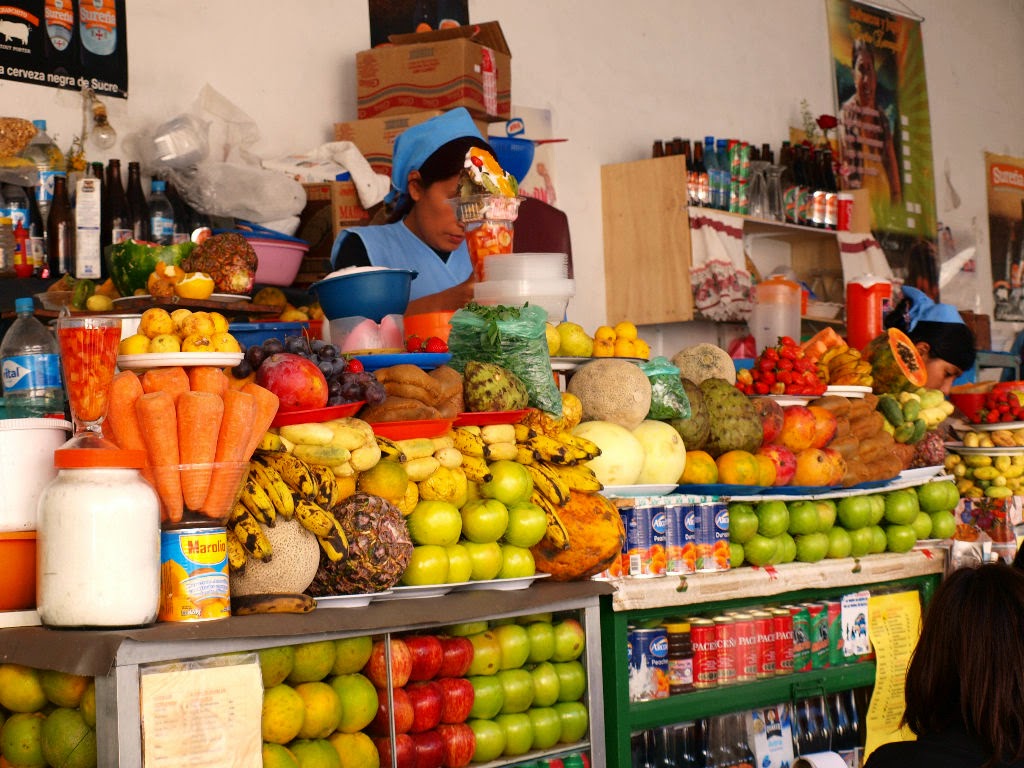 Me and my new friend the zebra! 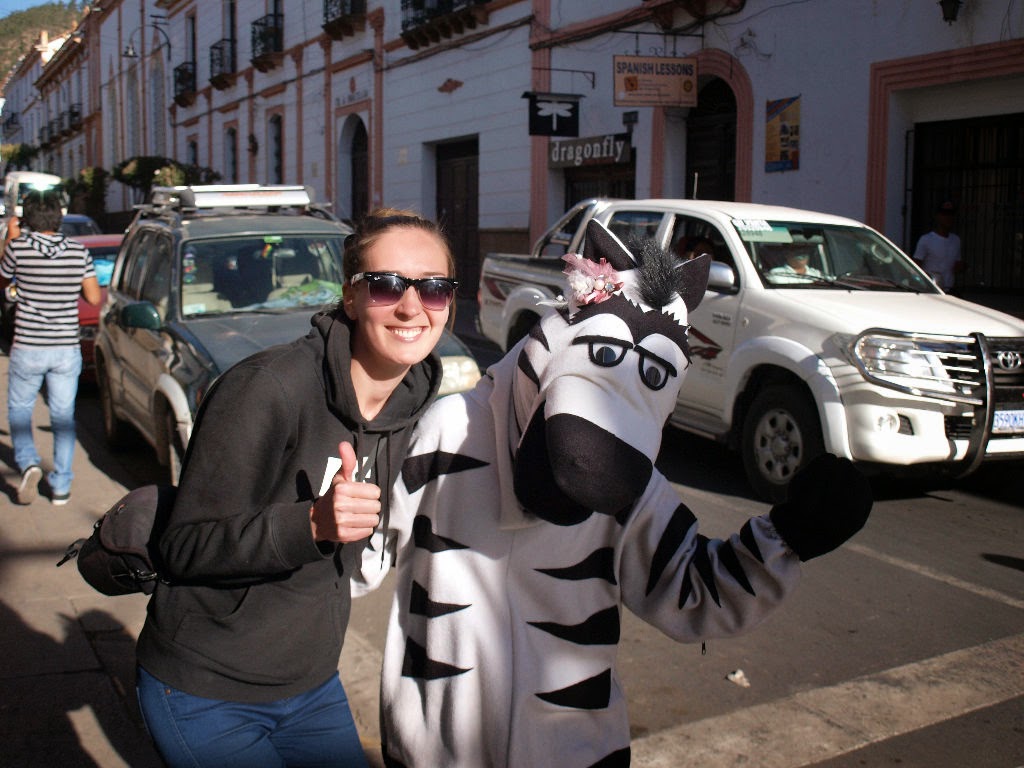 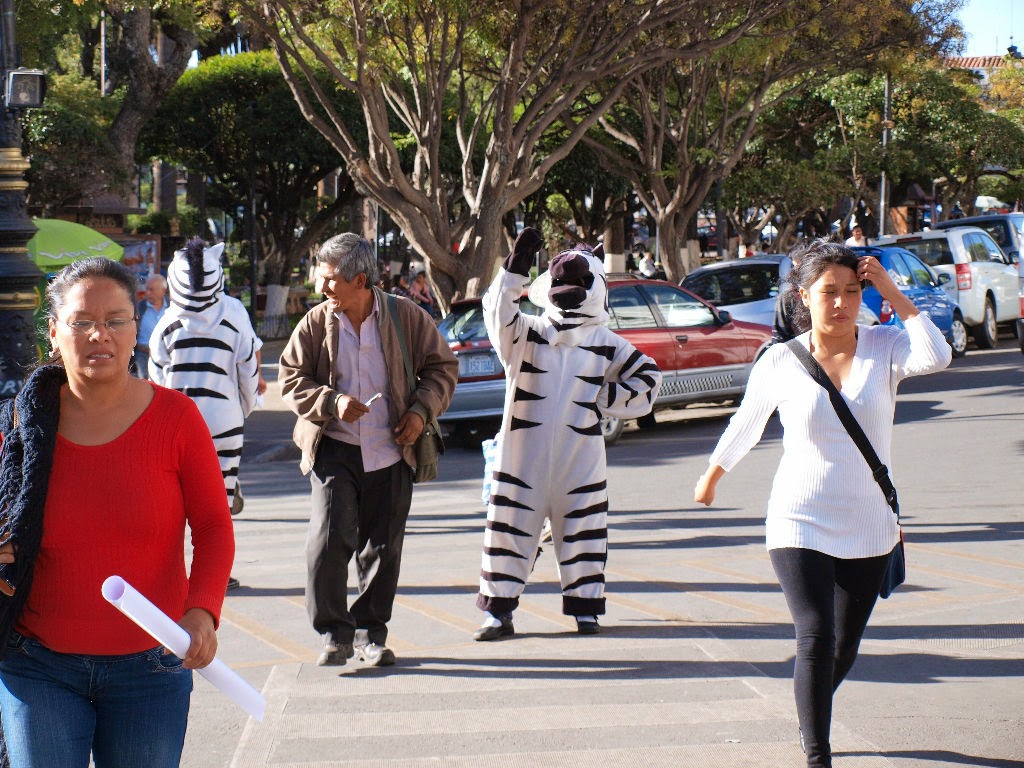 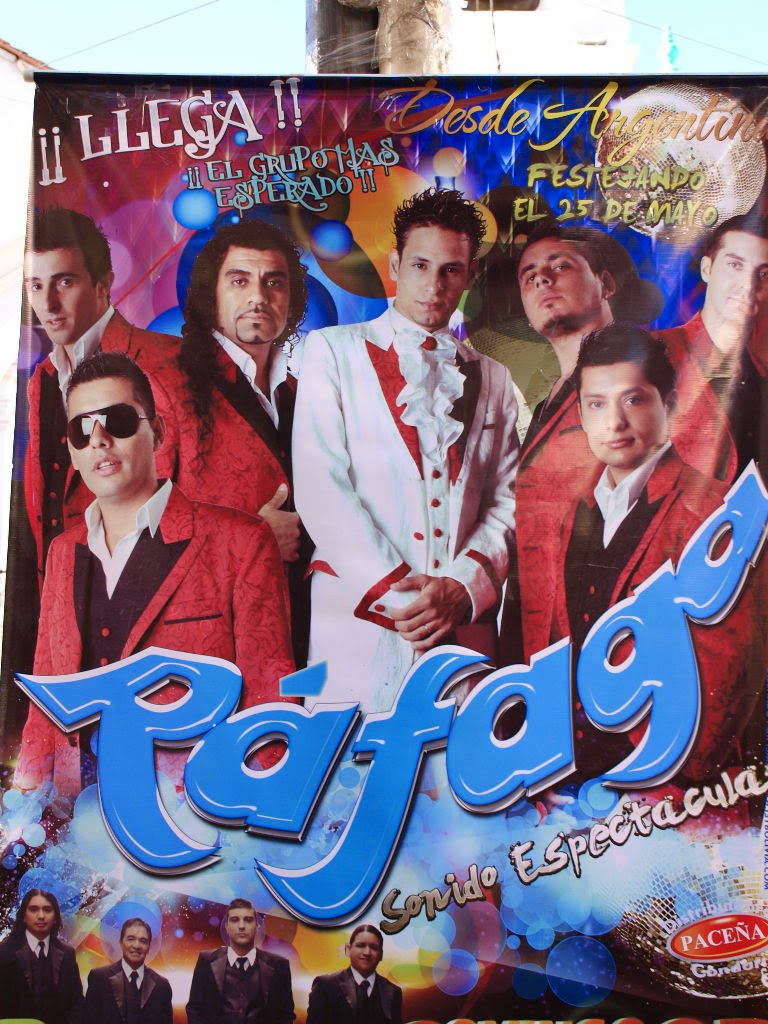 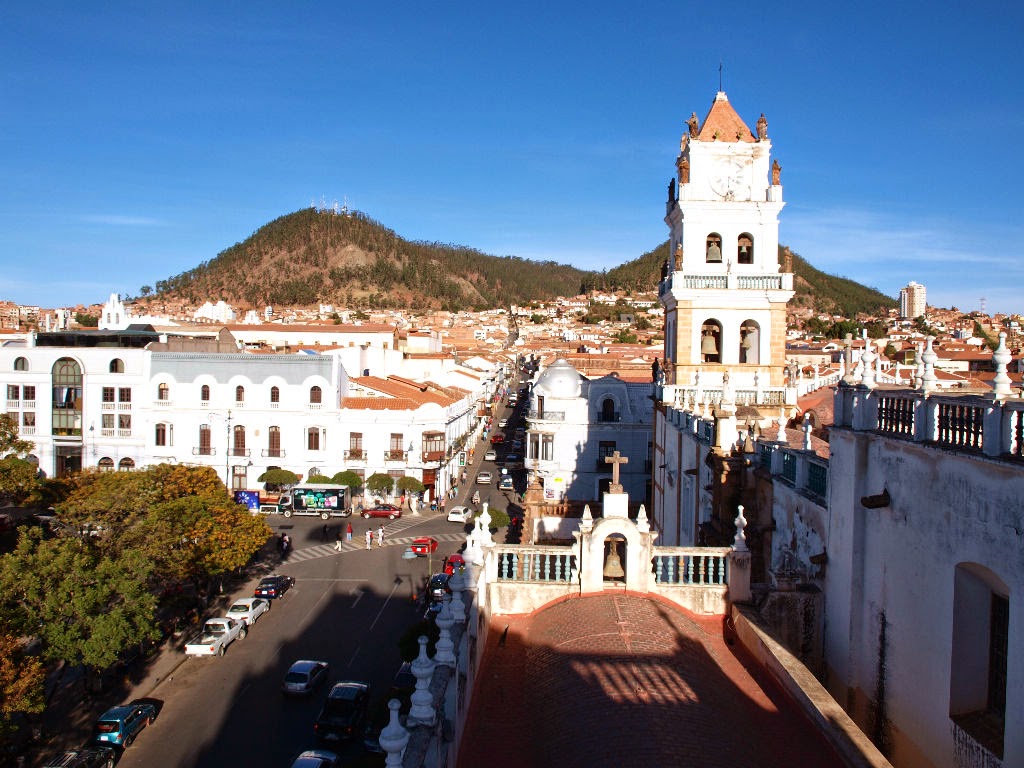 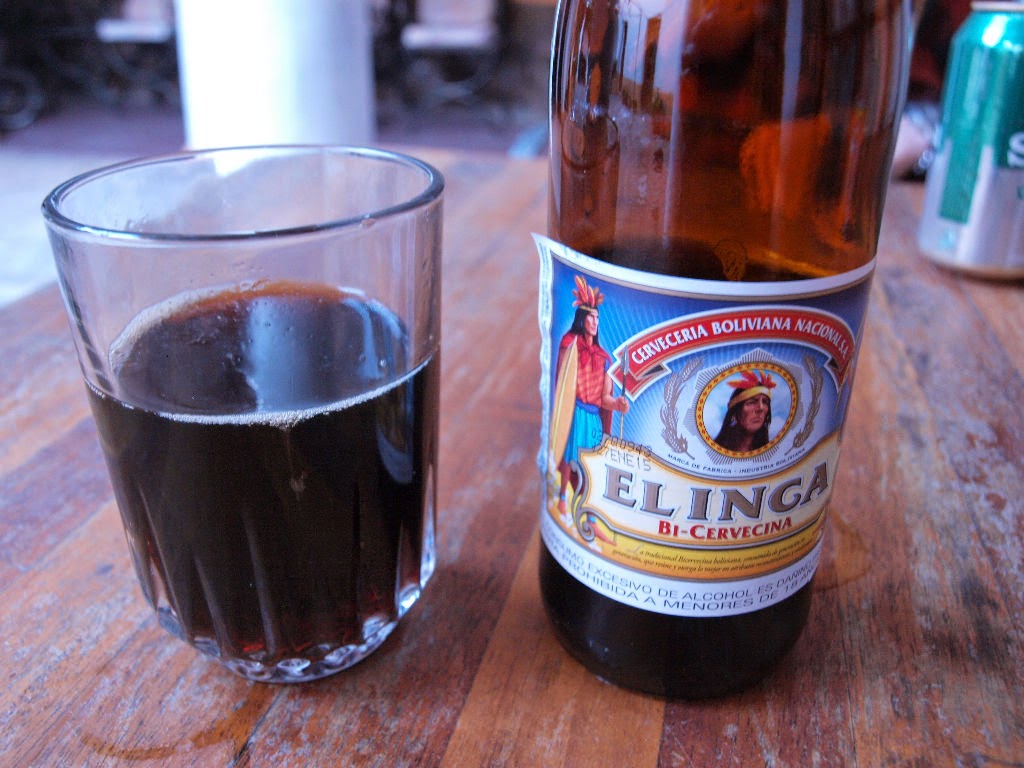 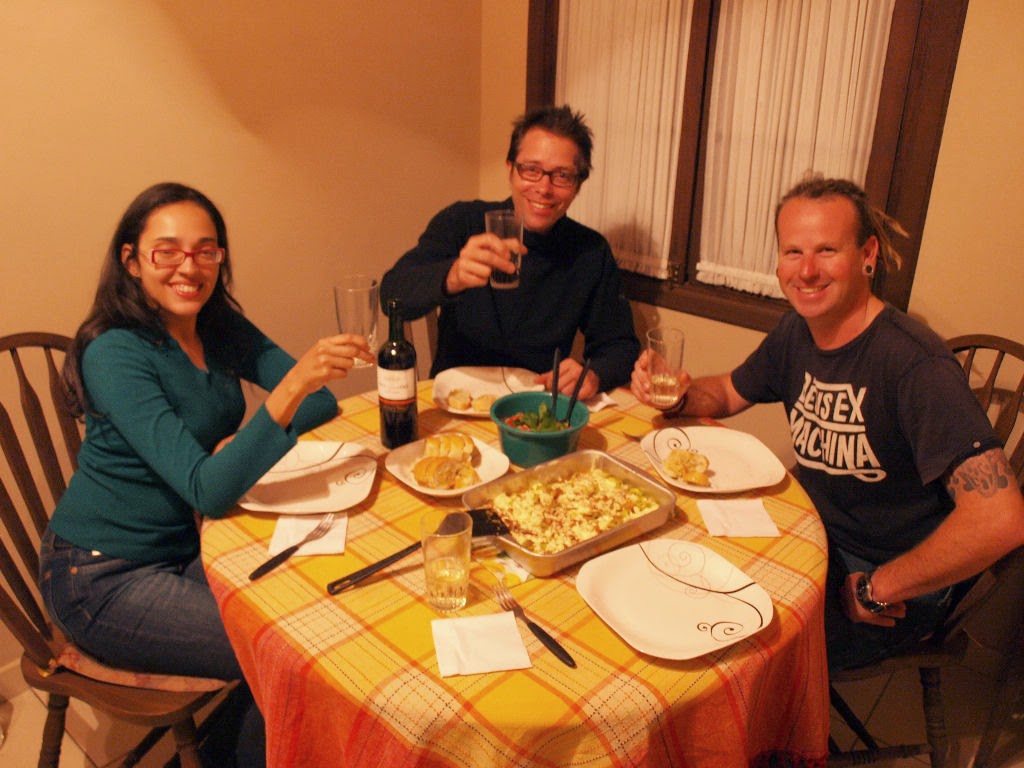 On of the parades for the 25 de Mayo festivites was all kids, here a bunch of them carrying the Indigenous flag 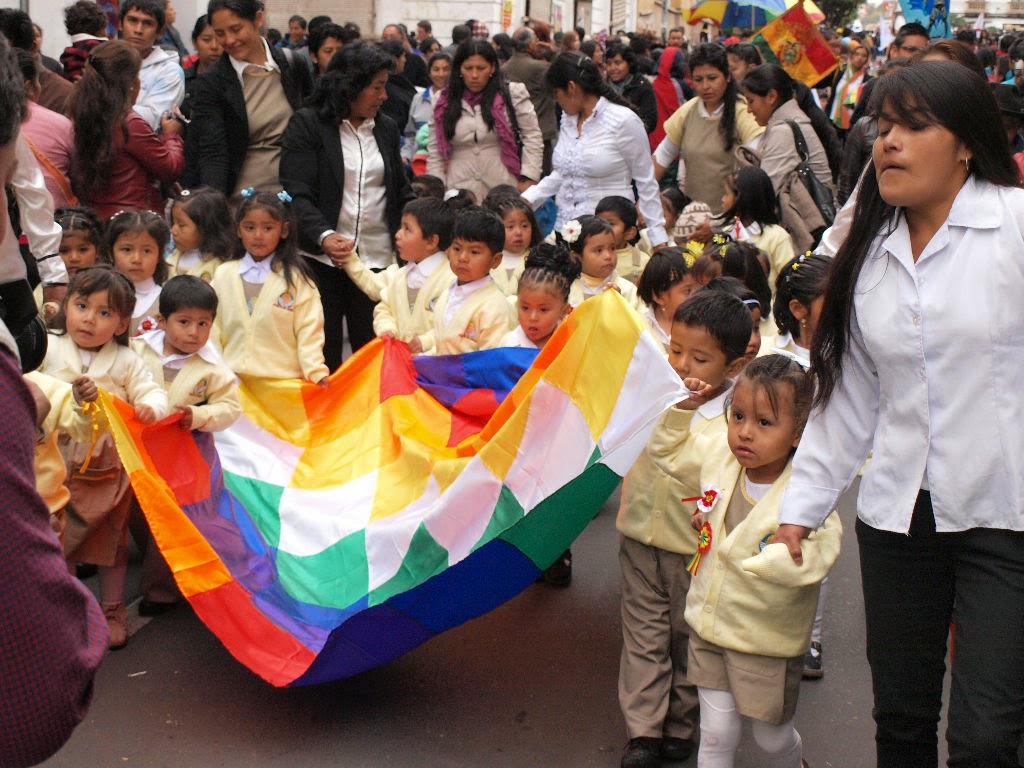 Some were dressed in traditional costumes... 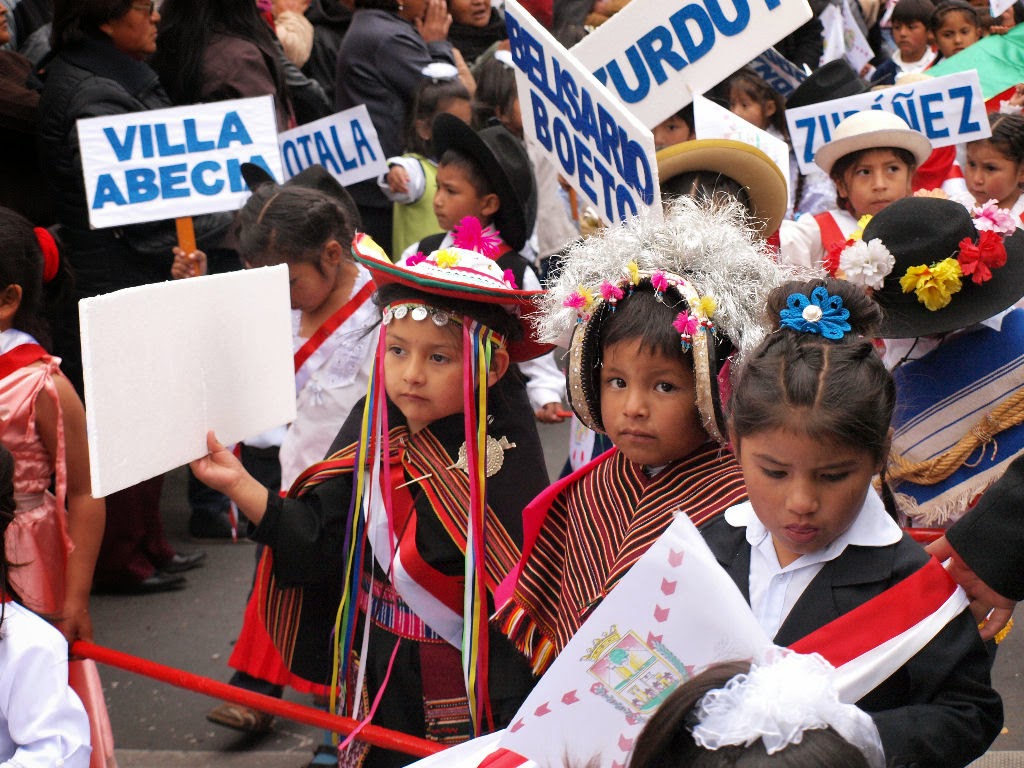 Others not so much...still cute though! 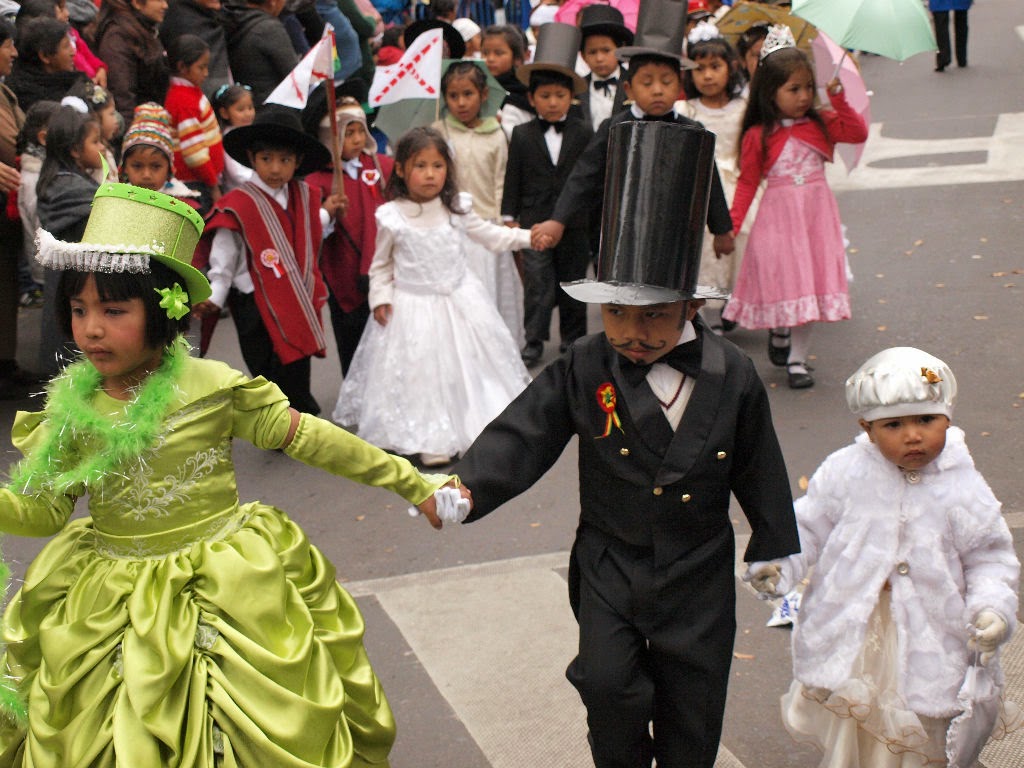 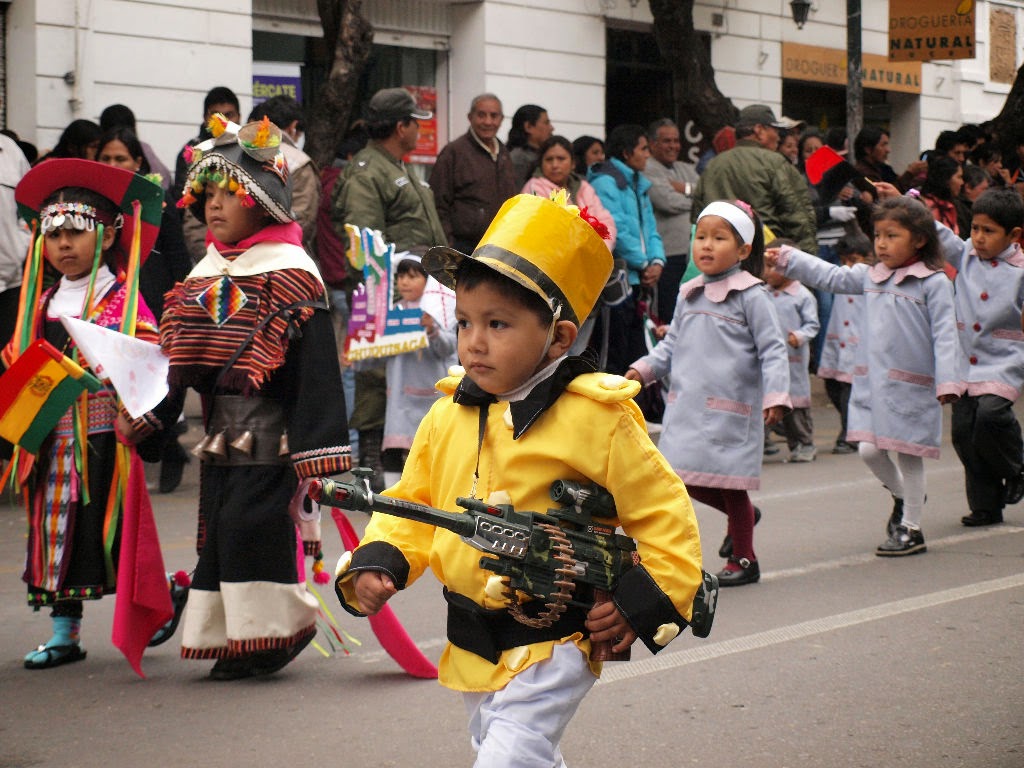 And on to the marching bands 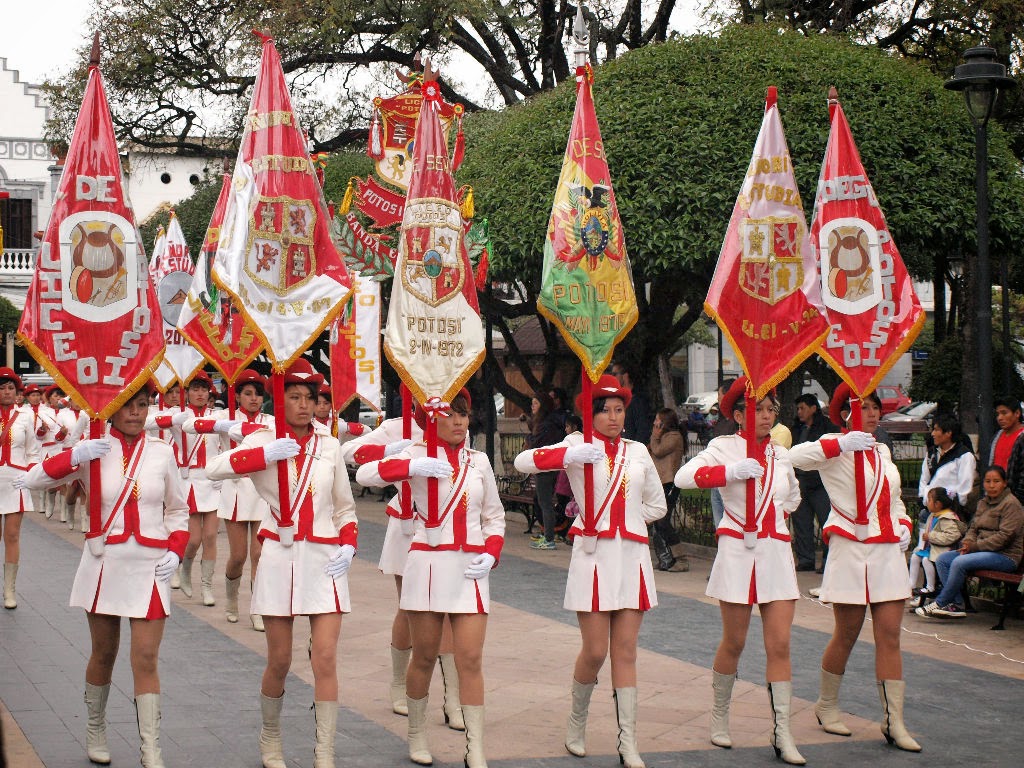 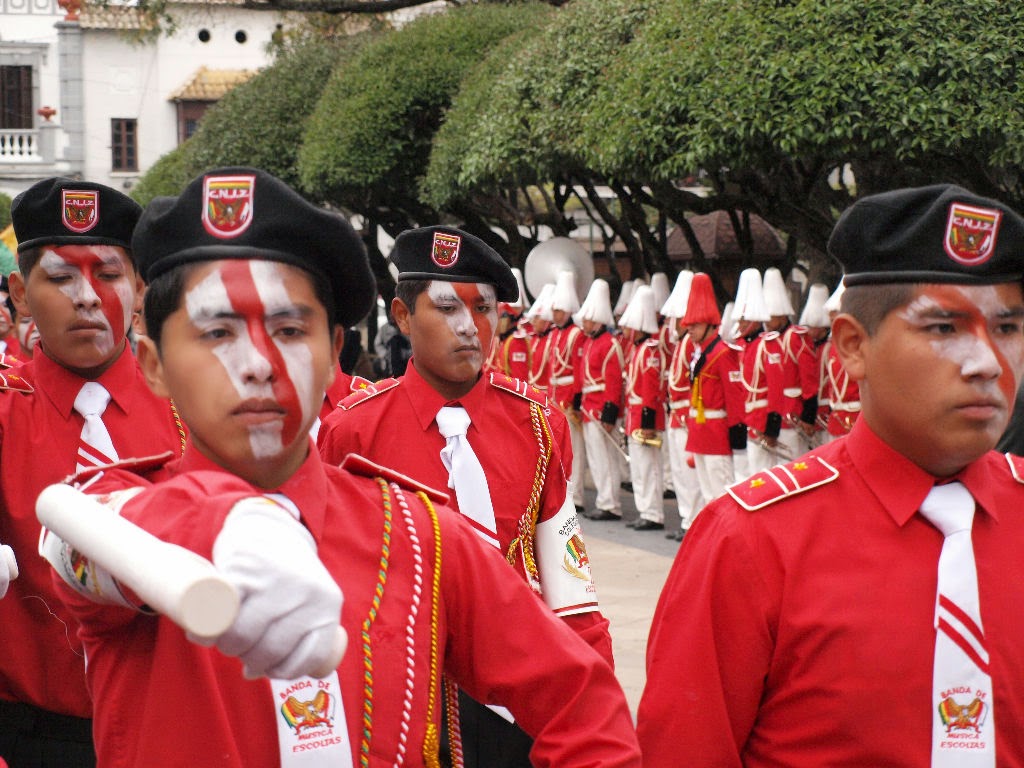 Mark and Maria in her kitchen 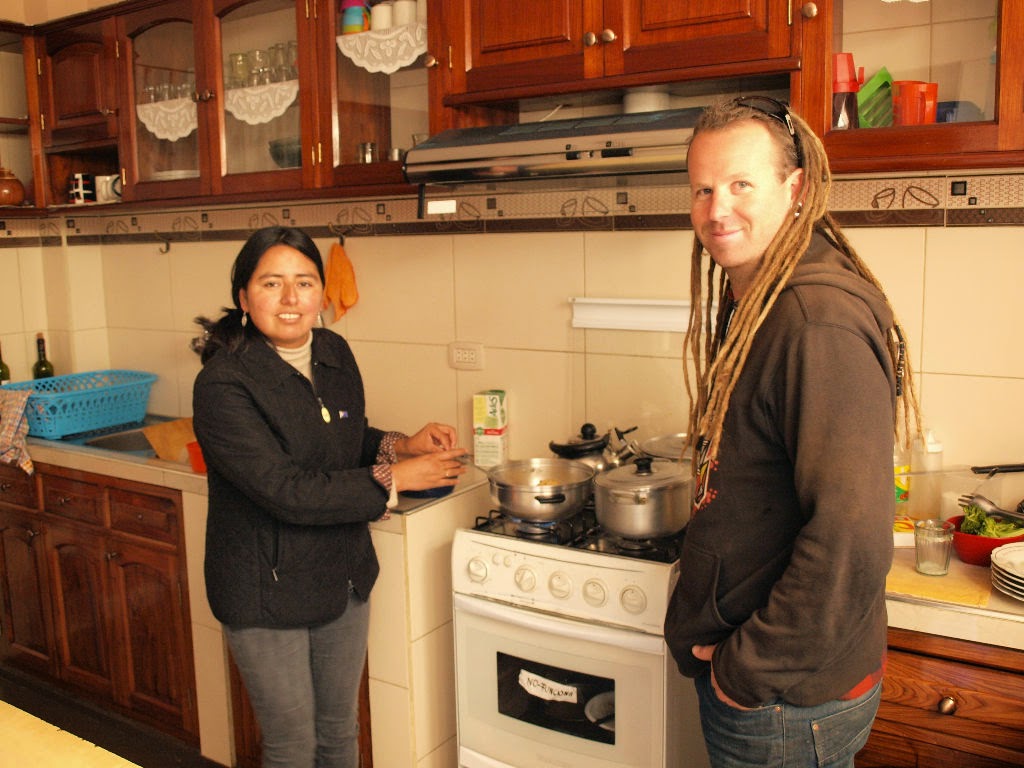 Mark taking Maria on her first ever motorbike ride 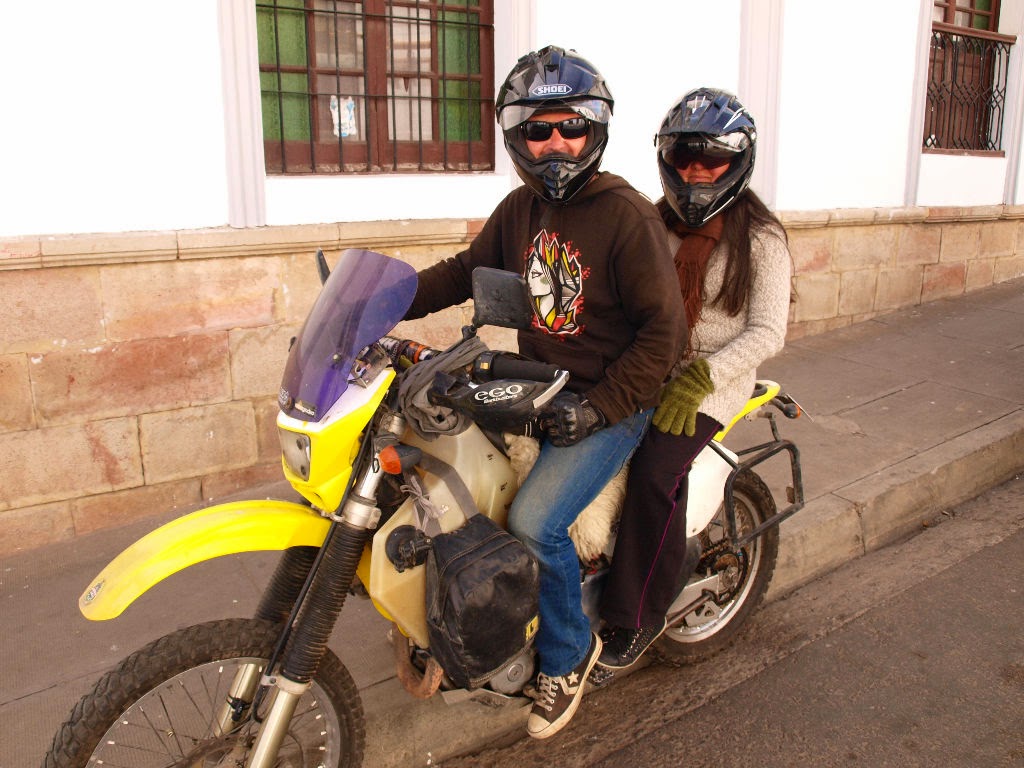