Of course we couldn't come to Peru and not visit the biggest draw card that Peru has to offer: Machu Picchu. It is visited by approximately 2,000 people every day so we knew to expect a very touristy place, but we hoped that that wouldn't take too much away from our experience.
Because Machu Picchu is cut off from all roads, the only way to get there is by train. A very expensive train. The Peruvian government has instated a special 'tourist train' which takes tourists from Cusco to Aguas Calientes (aka Machu Picchu village) which costs over $100. Tourist have no choice but to take this train as they are prohibited from boarding the local train. However, people in the know (which includes us, obviously) can take the backway which involves taking a road from Cusco that loops to the north of Machu Picchu and finishes in the village of Santa Teresa. From there you have to walk 10 kms along train tracks to Machu Picchu. It takes a bit longer doing it this way, but it is a hell of a lot cheaper, and well, it's actually a really nice ride.

We set out from Cusco and passed by the village of Pisac which is meant to be some kind of 'alternative, new-age haven for foreigners'...sounds horrible doesn't it?! We had planned to stay here a night but the sight of the hordes of tourist vans and the try-hard hippies wandering around was just too much to bear, so we continued on the road towards Santa Teresa, thinking we would maybe find somewhere to camp along the way, but we didn't. So without having planned to we actually made it to Santa Teresa late in the afternoon after having crossed a pass over 4,000 metres and then dipped into an almost sub-tropical climate. Bolivia and Peru have both fascinated me with how often you go in and out of different climates simply by the change of altitude. Coming from Denmark which is as flat as a pancake, I love being in these mountainous countries - it's so much more exciting than just flat! Especially when the last section of the road was on another 'death' road with sheer drops off to the side, but so stunning. The whole ride was worth it just because of this road!

In Santa Teresa we checked into a hostel which was owned by a sweet elderly couple. The next morning we left our bikes behind parked in the foyer of the hostel and with the very few belongings that we could carry, we began our trek towards Machu Picchu. First part of it was actually in a taxi to the hydro-electric station where the very last bit of road ends. Another 'death' road. From here we walked 6 kms along the train tracks surrounded by beautiful lush forest to a little guest house right on the side of the train tracks half-way in between Santa Teresa and Aguas Calientes, that we had had recommended to us. It was a lovely and quiet little oasis set in green gardens. Very much an antithesis of Aguas Calientes, the Machu Picchu village 4 kms further on which is where the hordes of tourists get unloaded off the trains and if there ever was a place whose raison d'etre is tourism this is definitely it! After unloading our bags at our hostel we walked to Aguas Calientes to buy our Machu Picchu tickets - $50 per person.

The next morning we got up bright and early and started walking the 4 kms to Machu Picchu. Now, I know that might not sound like very far, but when the last 2 kms are on an ancient and extremely steep Inca stair case, I promise you it's a workout. We were shattered by the time we got to the top! Sensible/spoiled tourists take the tourist bus up but at a price of $10 each way for a 10 minute bus ride we chose the economical option. Besides, we're really tough you know? Because there were only a few other nutters walking up it was quite tranquil...which made for quite a shock when we made it to the top and were met with tourism inferno. We squeezed past the hordes of khaki-clad tourists at the entrance only to find ten times as many inside the gates, most walking around like chickens following their guide. Mark and I gave each other an exasperated look and then pushed our way through this snails pace parade. If we hadn't we would have still been there now, waiting for some fat American to move over. I might have 'accidentally' elbowed one of these specimens in their side while squeezing past but I assure you it was just an accident...

We hightailed it to the top of a hill to get a good overview of the place and here we sat contemplating this very special place. So now is as good a time as any for some background info about Machu Picchu:
This 15th century Inca site takes its name from Quechua and means 'Old Mountain'. It was unknown to the outside world until 1911 when American historian Hiram Bingham came across it on a trek. Although situated only 80 kms from Cusco, the Inca capital, the Spanish conquistadors never found it and consequently did not plunder or destroy it, as they did many other sites. Over the centuries, the surrounding jungle grew over the site and few people knew of its existence. Because of this, it is a relatively intact archaeological site, although many of the buildings here have been reconstructed to give people a better idea of what the original structure looked like. It is thought to have been the home of the Inca emperor and is believed to have been a very sacred religious site for the Incas.

How Machu Picchu was constructed is one of the most interesting things. The Incas were masters of a technique in which blocks of stone are cut to fit together tightly without mortar. Many places here are so perfect that it is said that not even a blade of grass fits between the stones! How they moved and placed the enormous blocks of stones remains a mystery, although the general belief is that they used hundreds of men to push the stones. Makes me exhausted just thinking about it!

As touristy as it is, you can not deny the uniqueness of this place. It is truly one of a kind. The setting on a mountain ridge surrounded by towering lush mountain tops all around is awe-inspiring and very deservedly it has been named as one of the 7 Wonders of the World. It is one of those places which you can sit and stare at for a long time, just taking it all in, all while you're contemplating how the hell the Incas managed to build this phenomenal place using only man power. Incredible.

When we returned to Santa Teresa, we both felt like we were about 100 years old, that's how our muscles were aching. Those Inca steps were a killer! So no better place to be than a hot springs, one of which we found a couple of km's outside Santa Teresa. This place was way more tastefully designed than the other one we went to in between Puno and Cusco and also not at 4,000 metres which made it much more pleasant! It was pure bliss to float around in the crystal clear water which had a perfect temperature and on top of this we could camp there for free, which we did. It was a perfect way to finish off our little Machu Picchu trip, and although our sore leg muscles dissipated after a few days, the memories of Machu Picchu will stay with us forever.

On the way to Santa Teresa 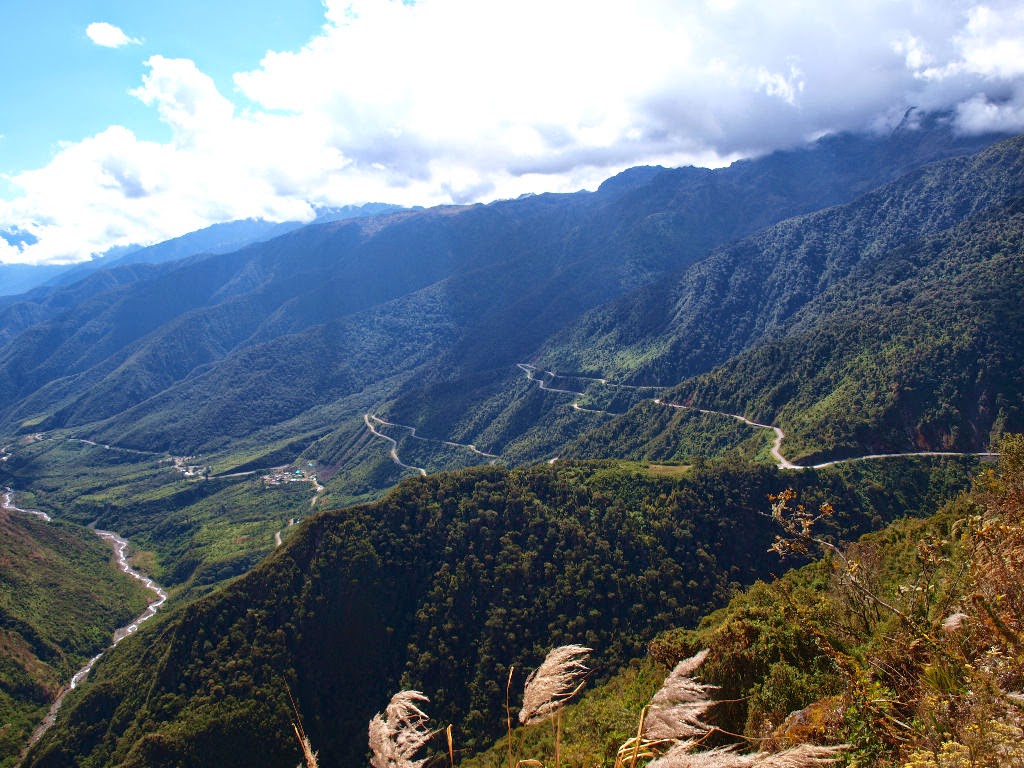 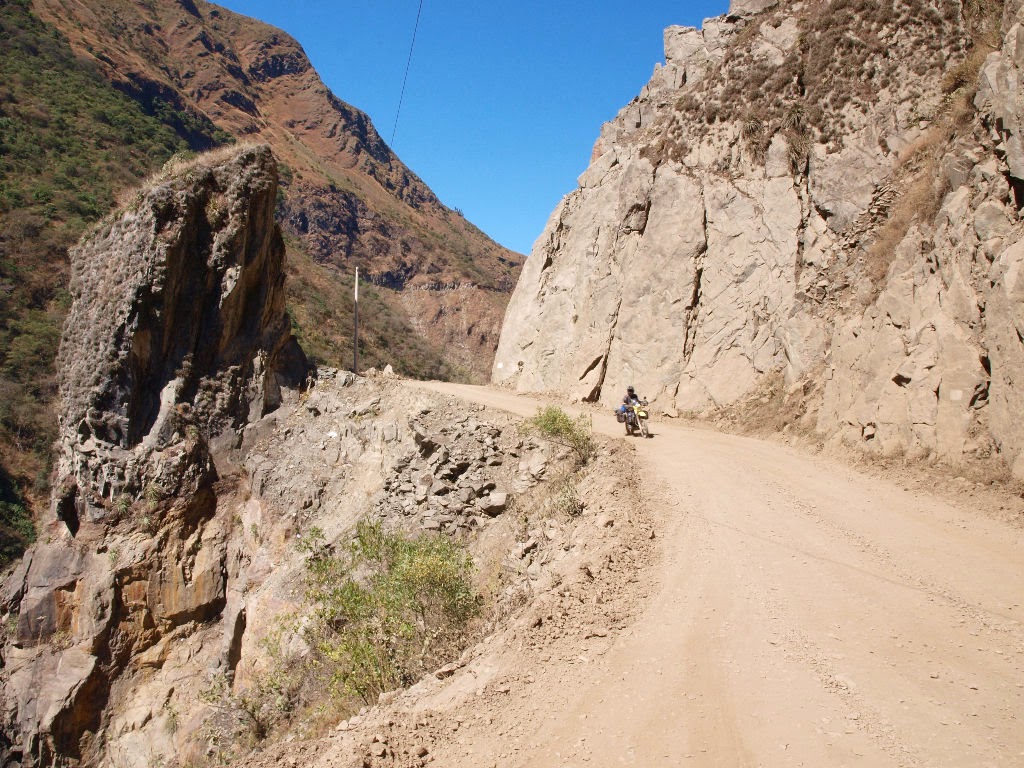 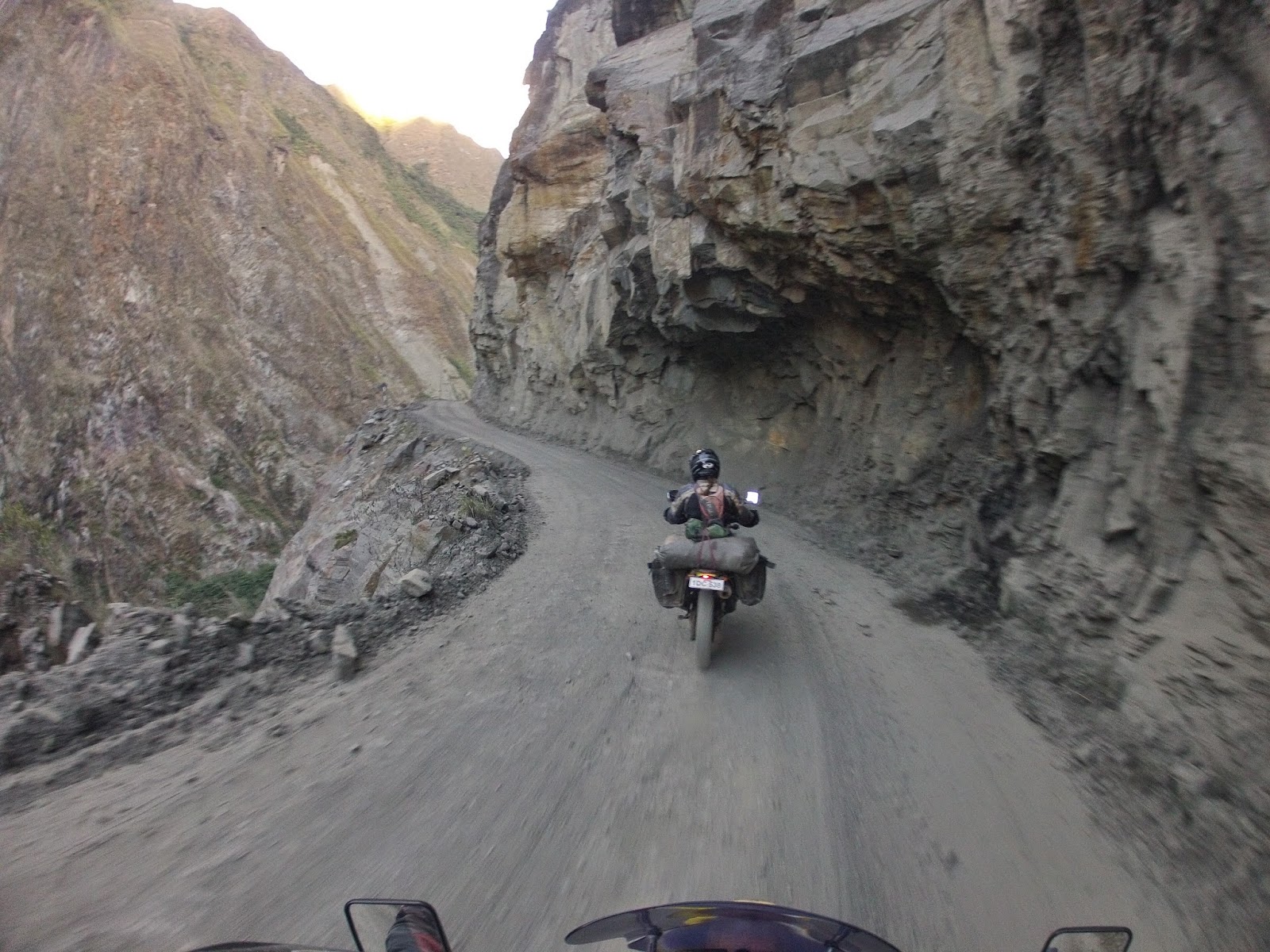 Walking on the train tracks from Santa Teresa to Machu Picchu 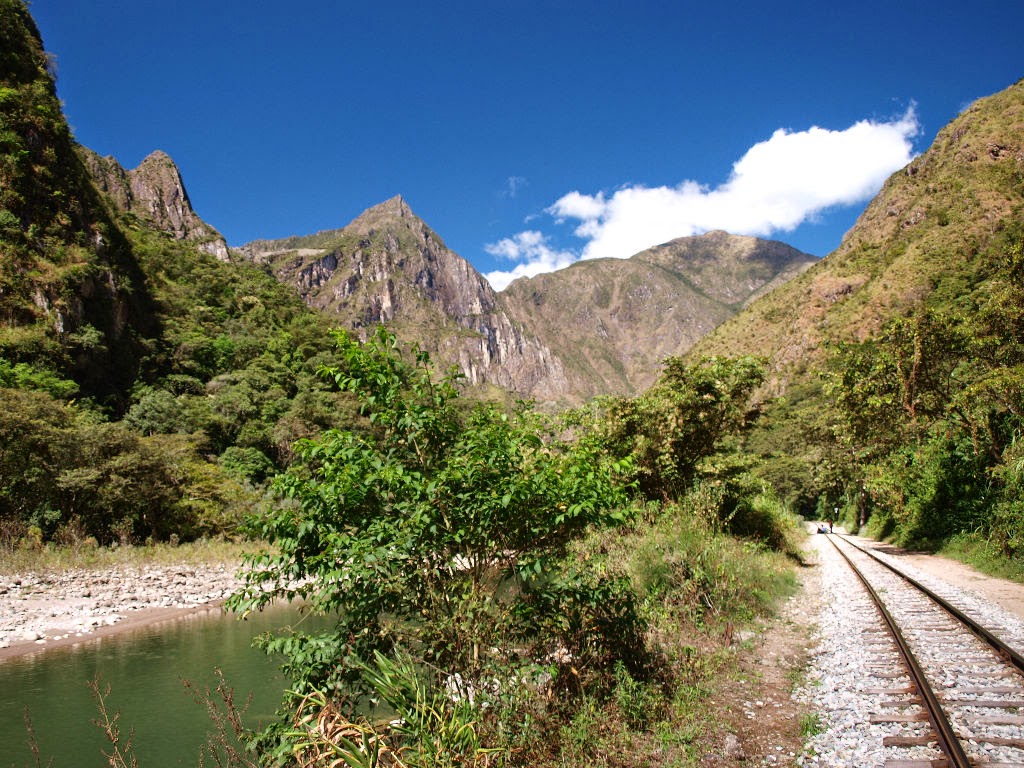 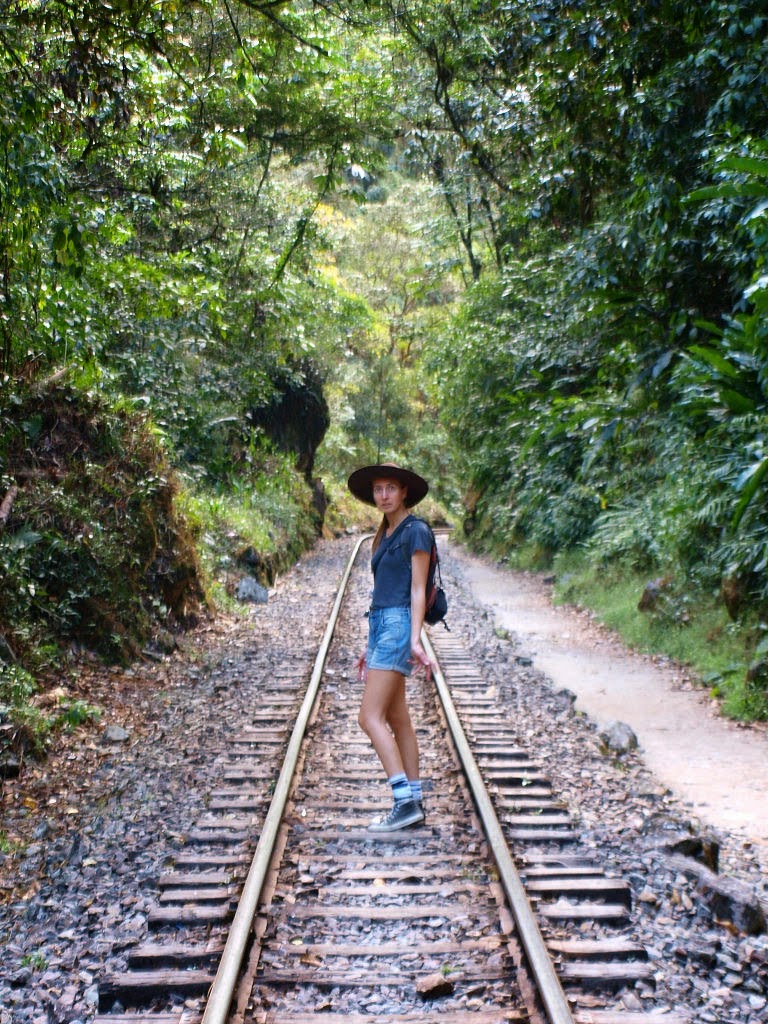 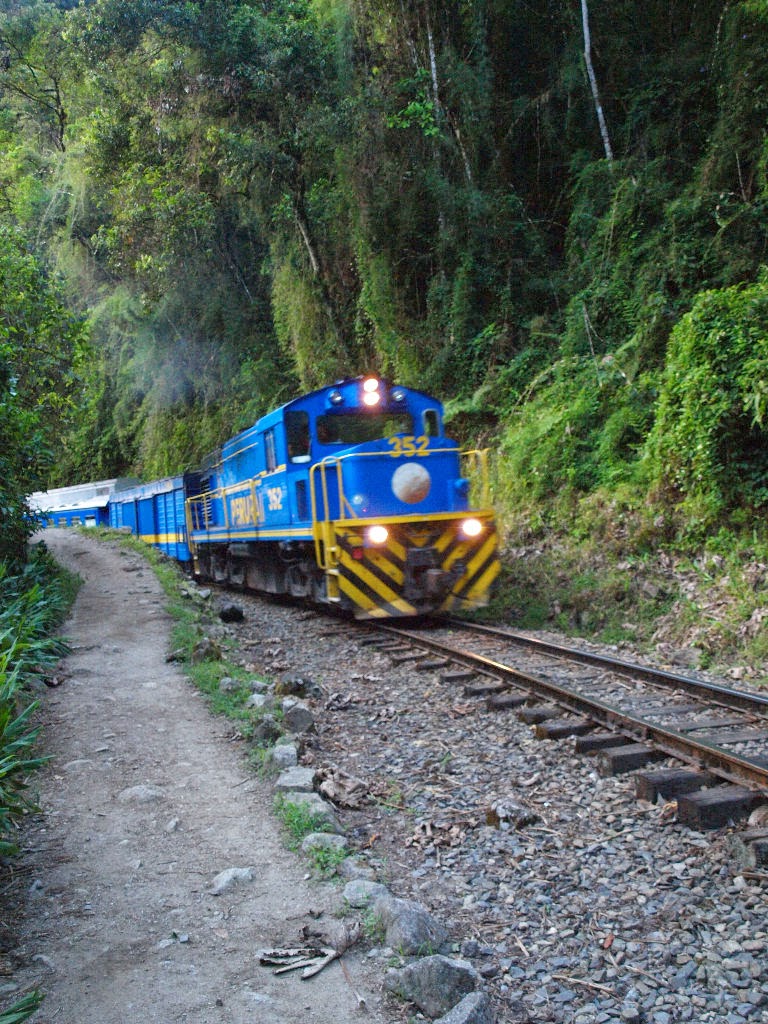 Splitting rocks with my hammer... The local workers invited me to try! 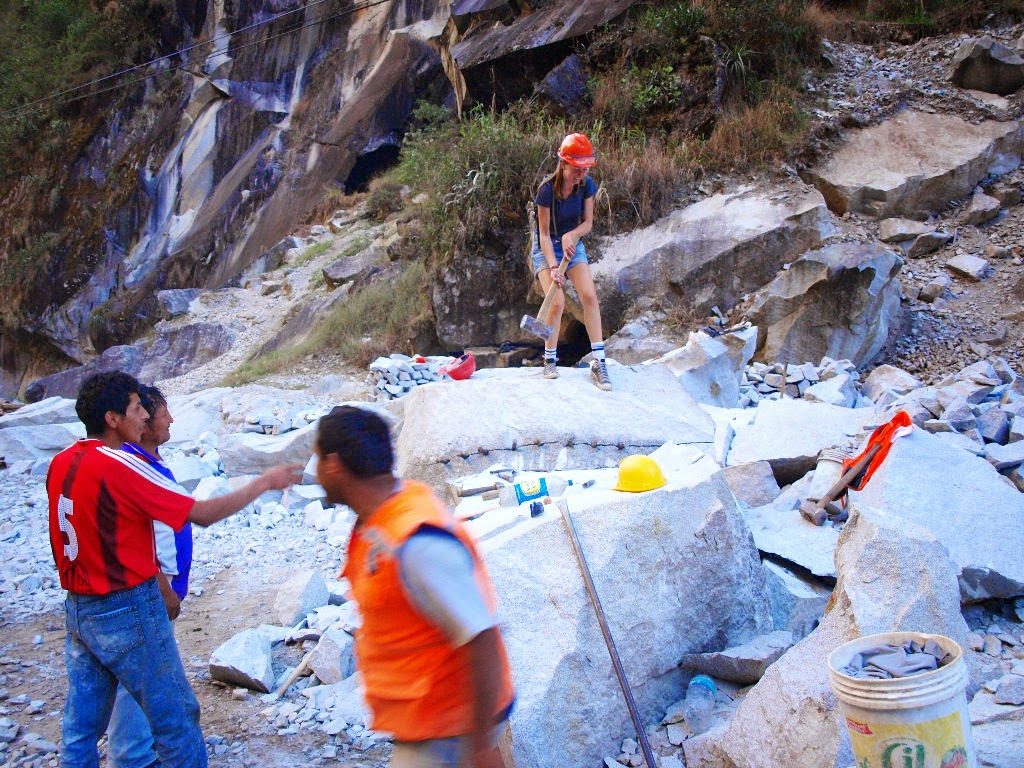 On the tough, tough walk up to Machu Picchu - check out those steps! 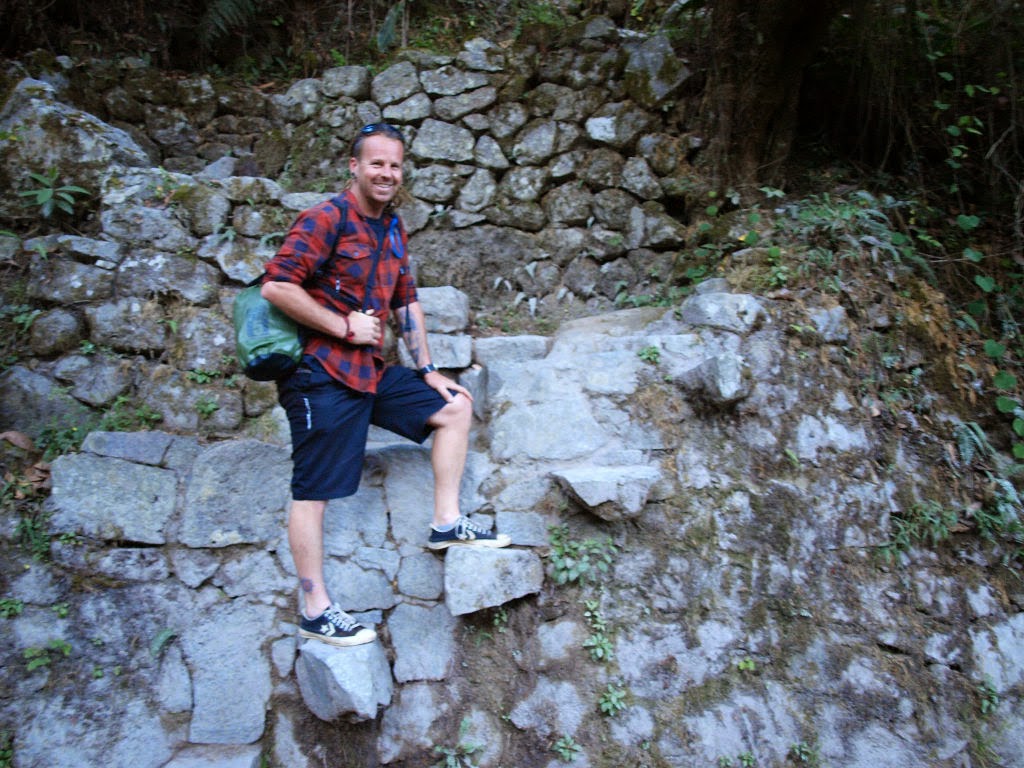 First view of Machu Pichu in the morning light 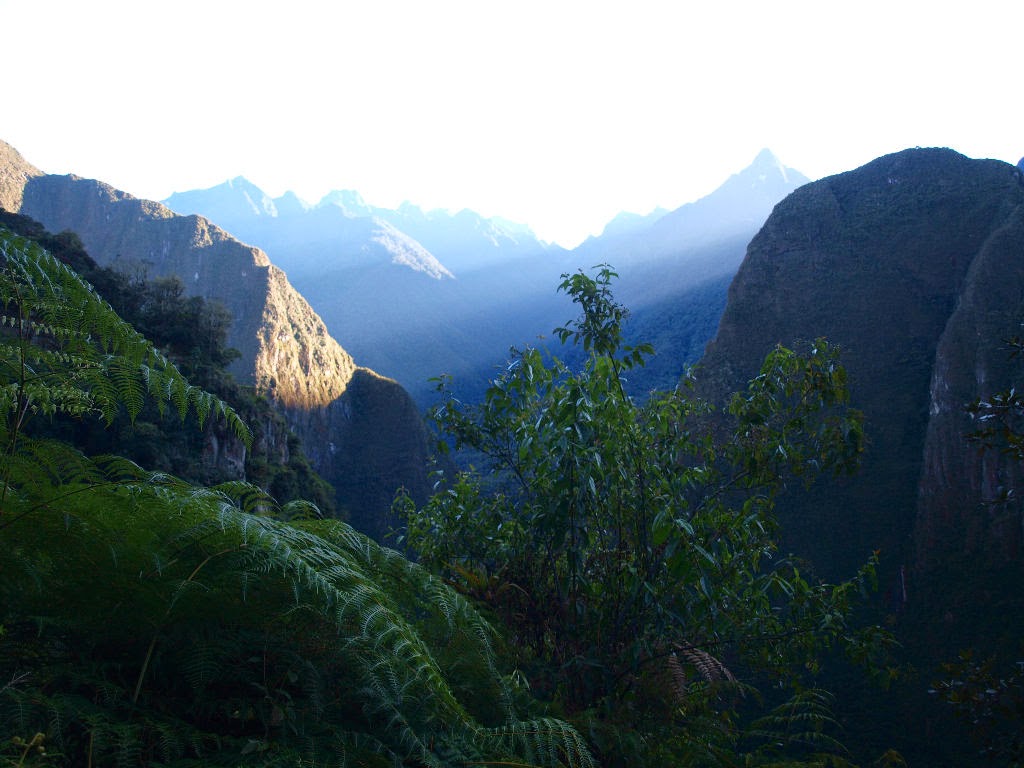 And here it is folks...Machu Picchu 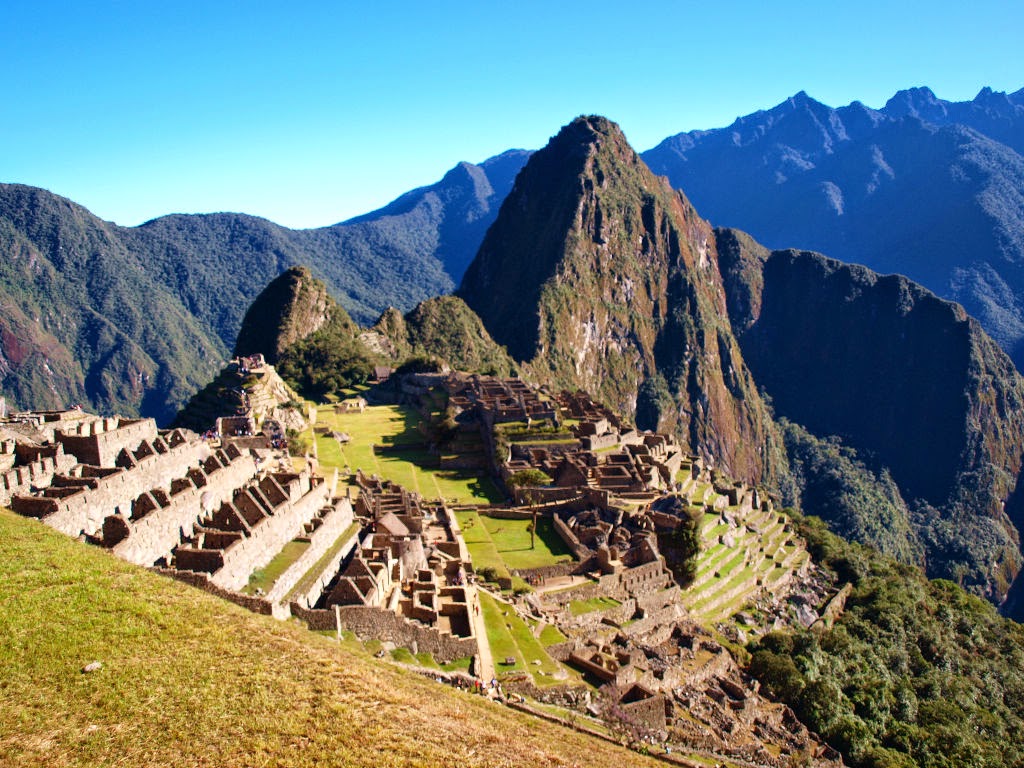 Look carefully at this photo... notice the human face? 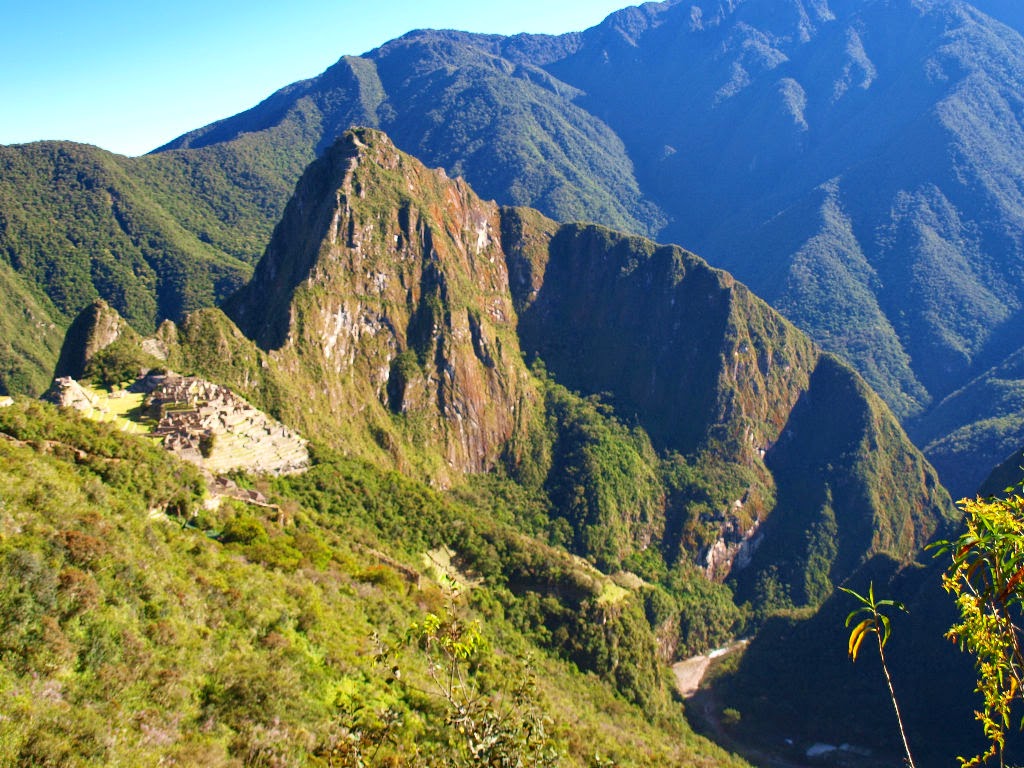 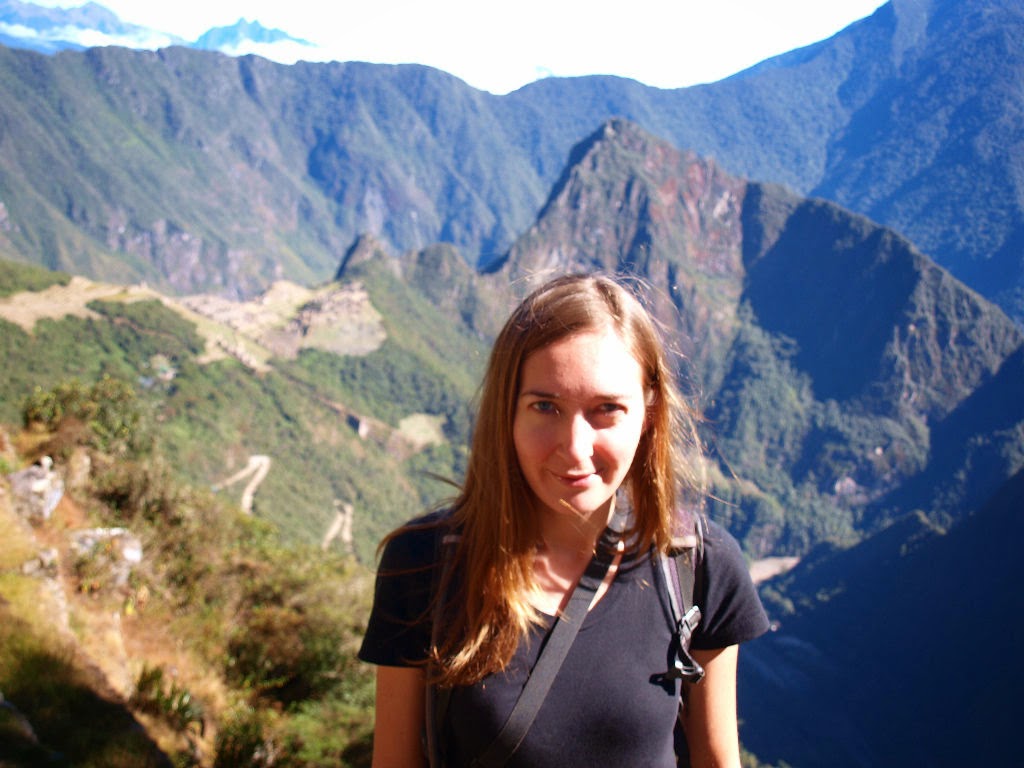 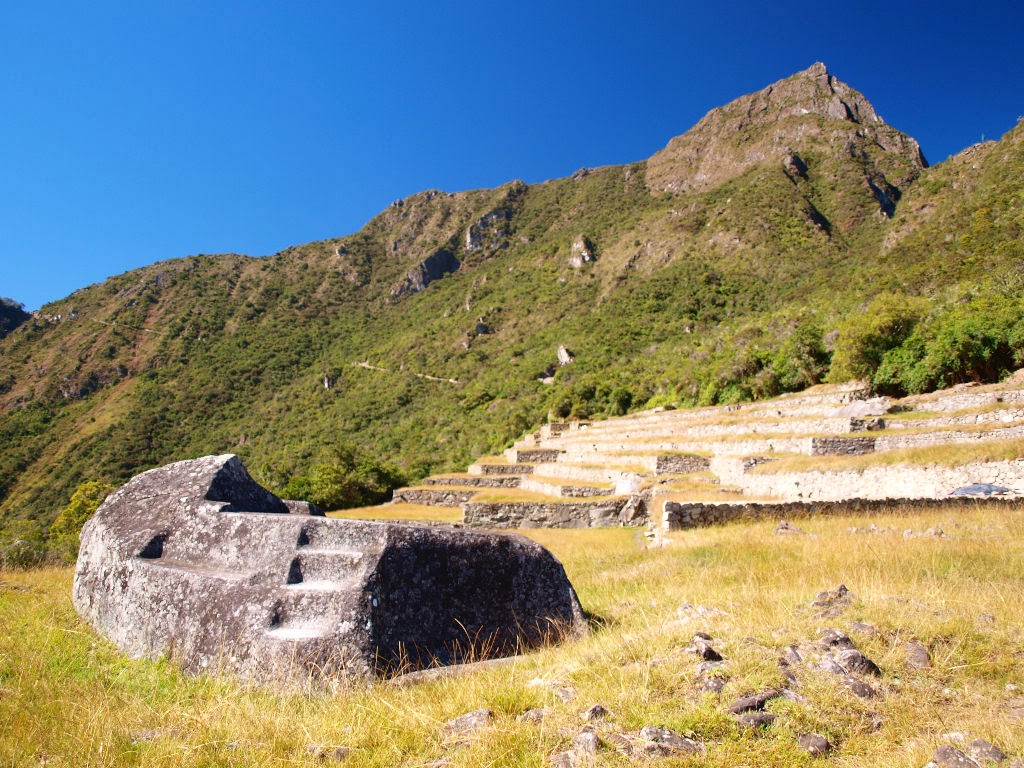 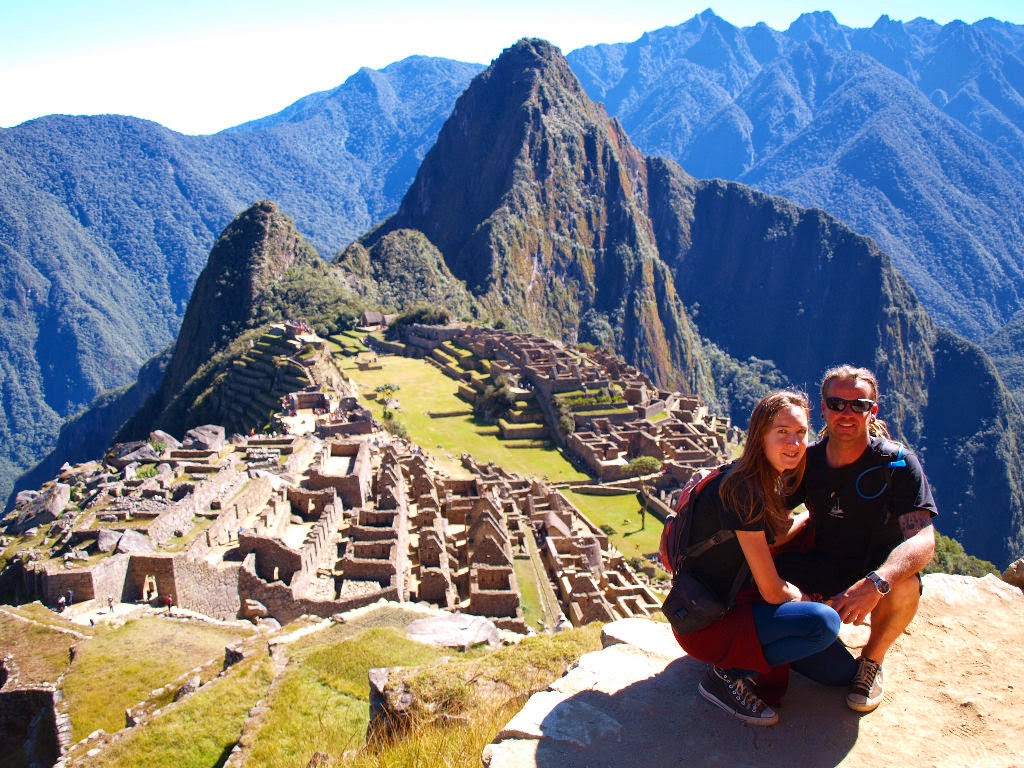 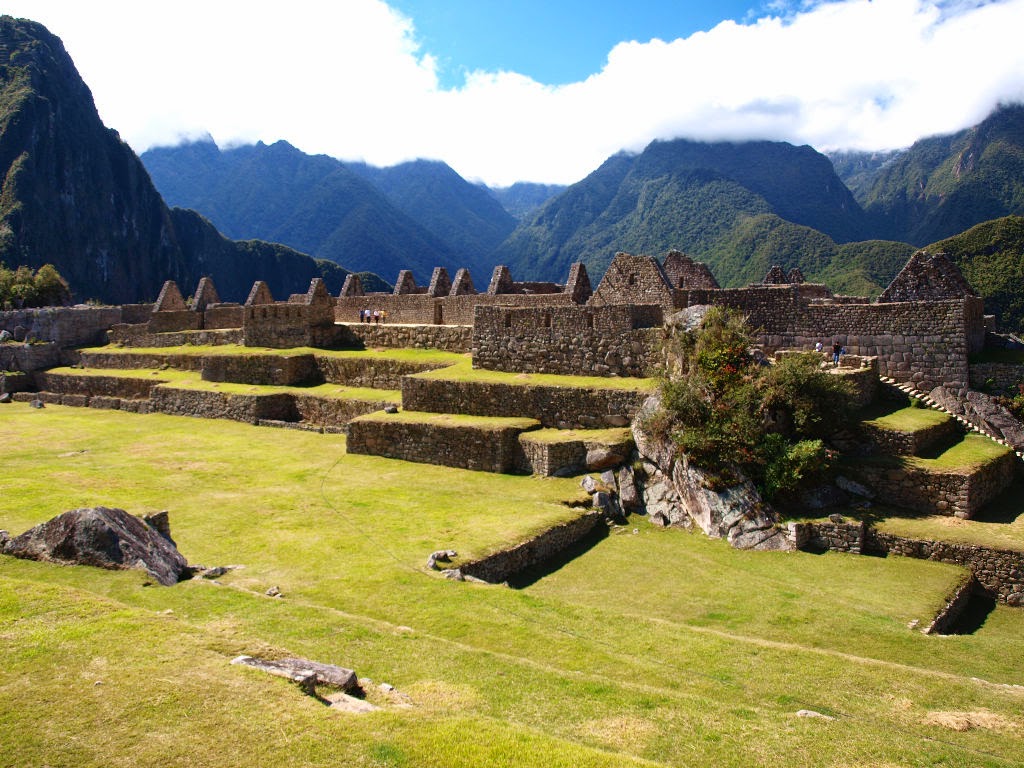 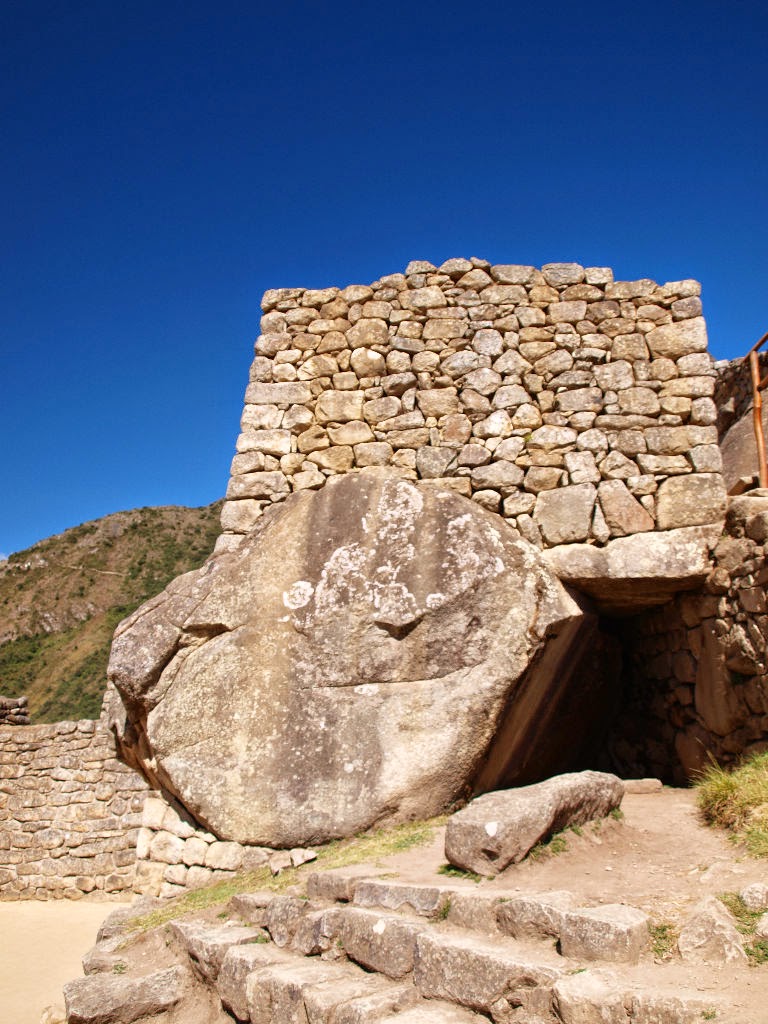 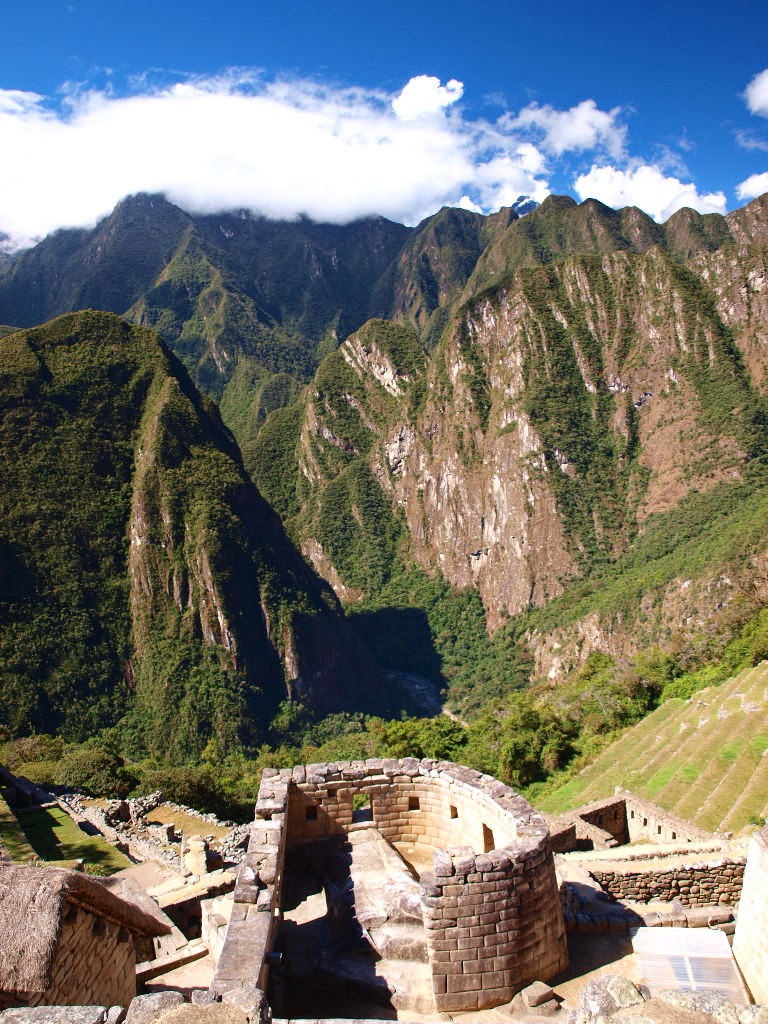 The 'Inca Bridge' which is an insane path along the rock side...! For obvious reasons closed to the public! 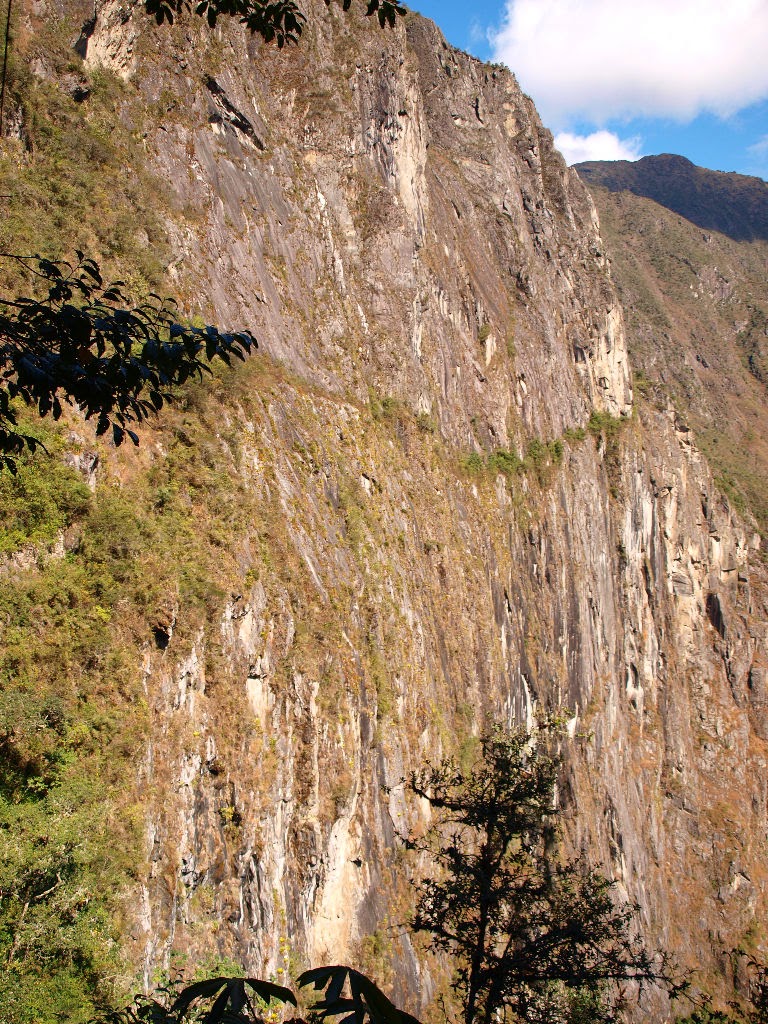 Looking down into the valley below 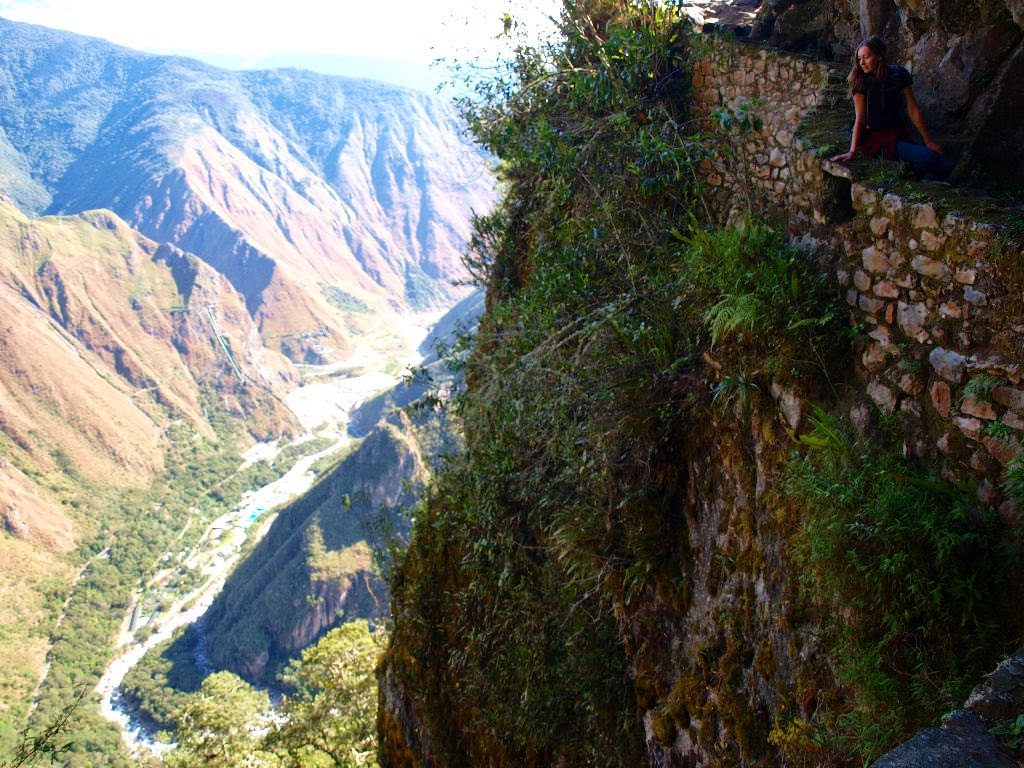 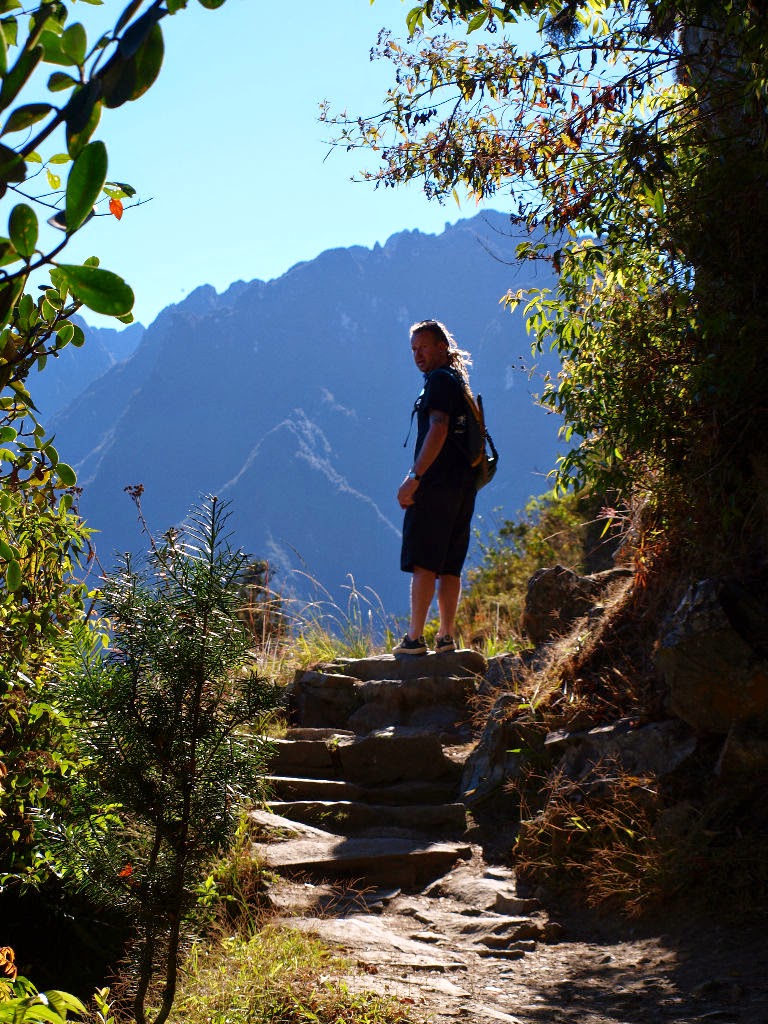 There are a few llamas hanging around too 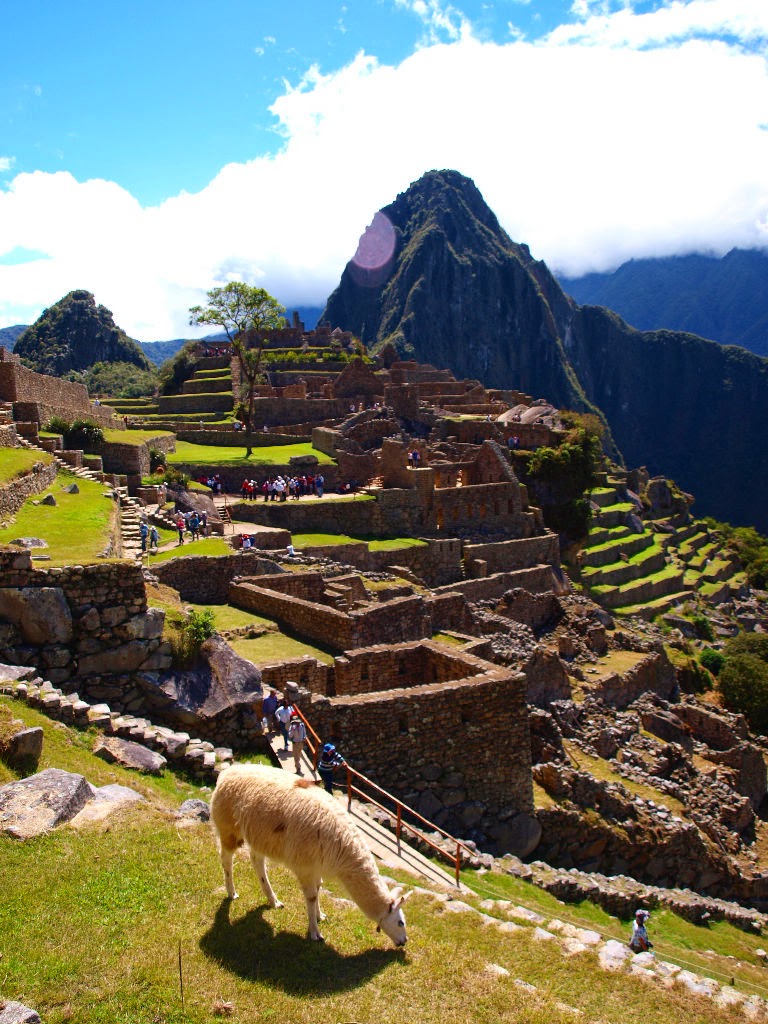 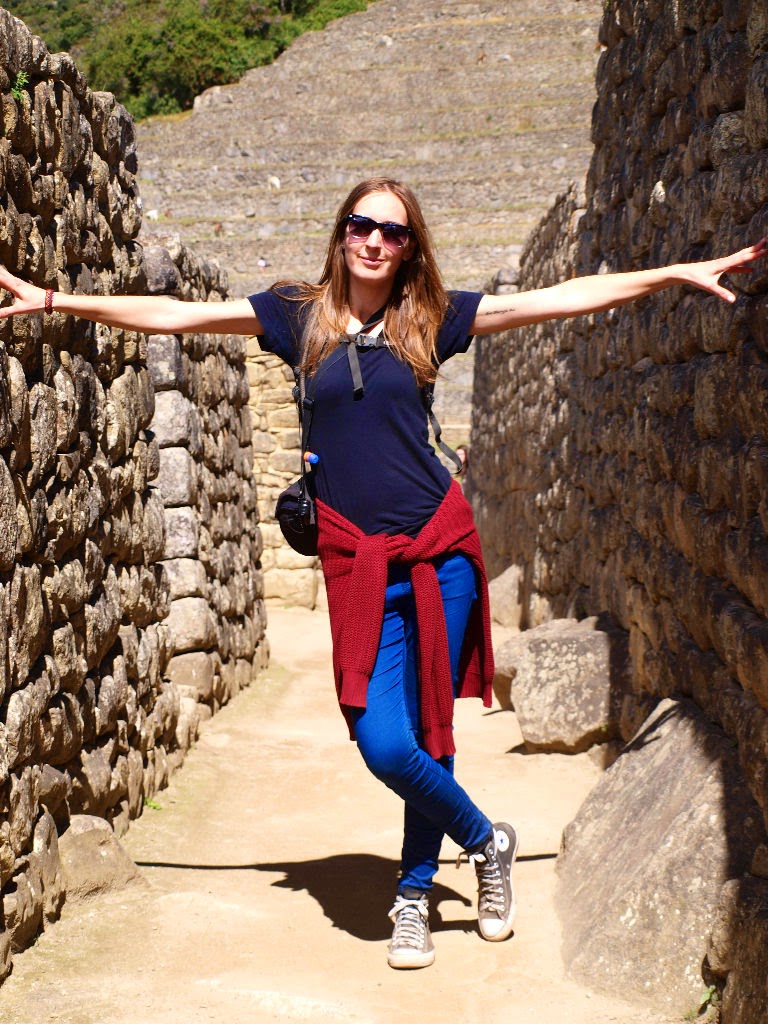 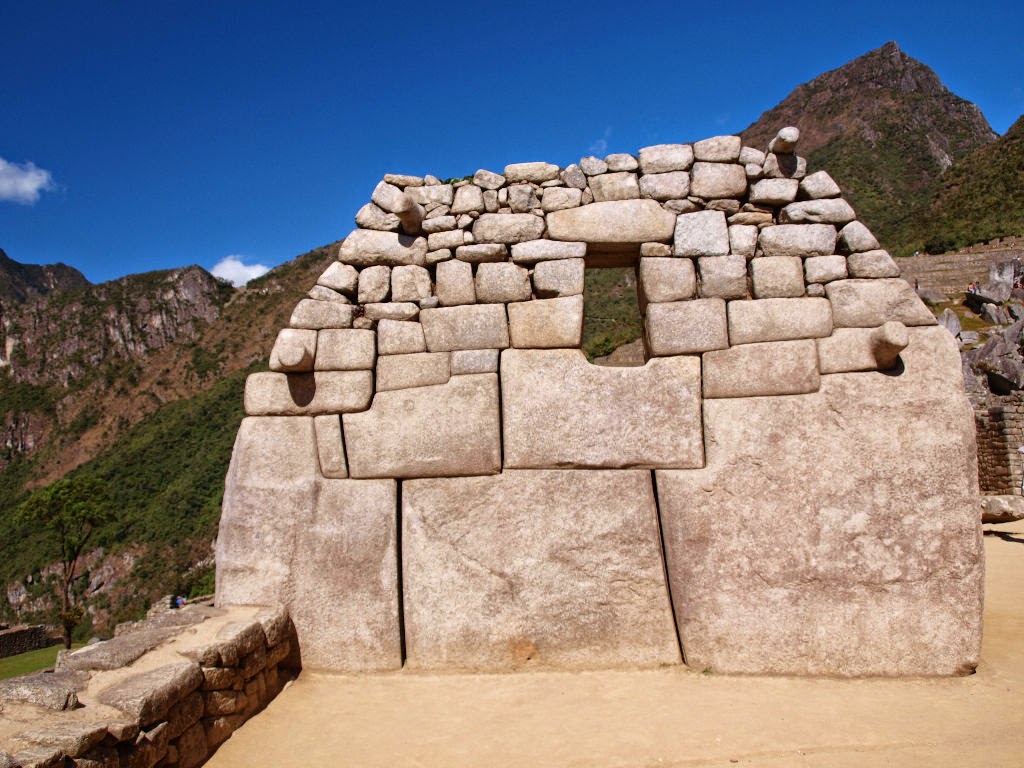 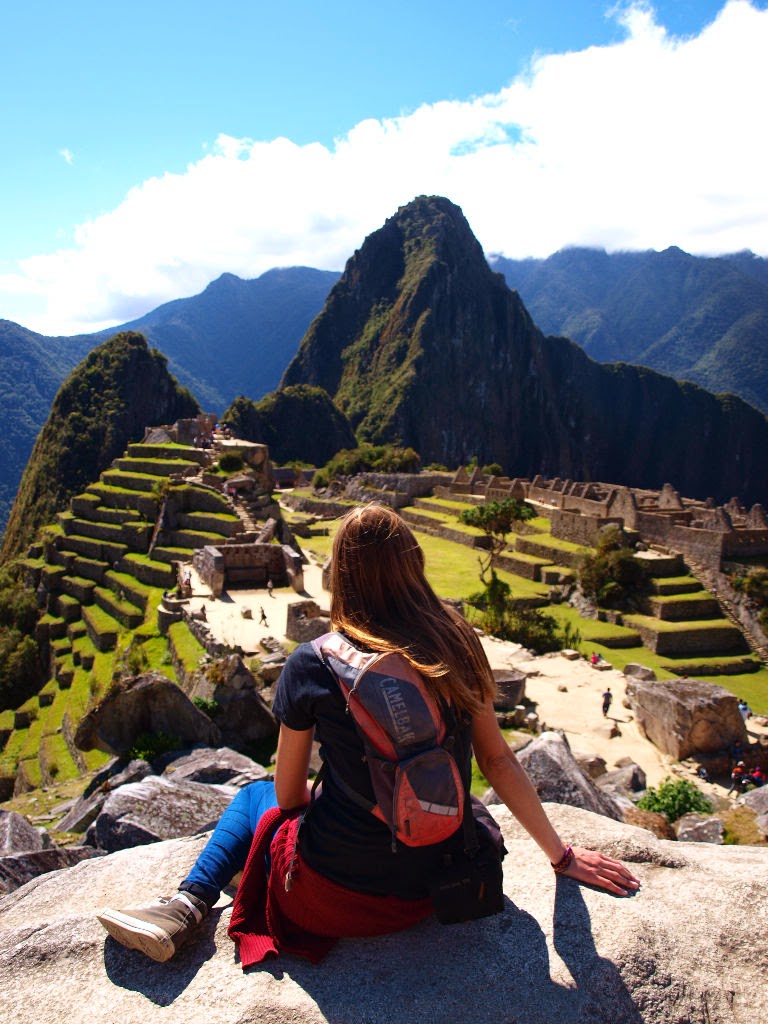 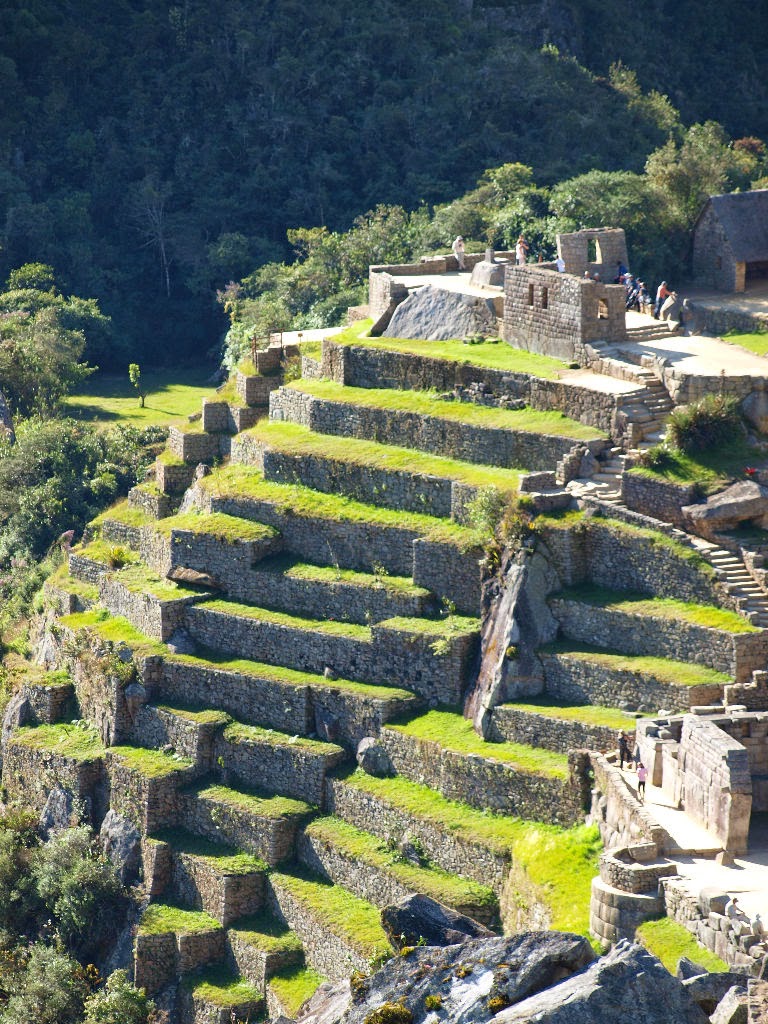 At the wonderful hot springs just outside Santa Teresa 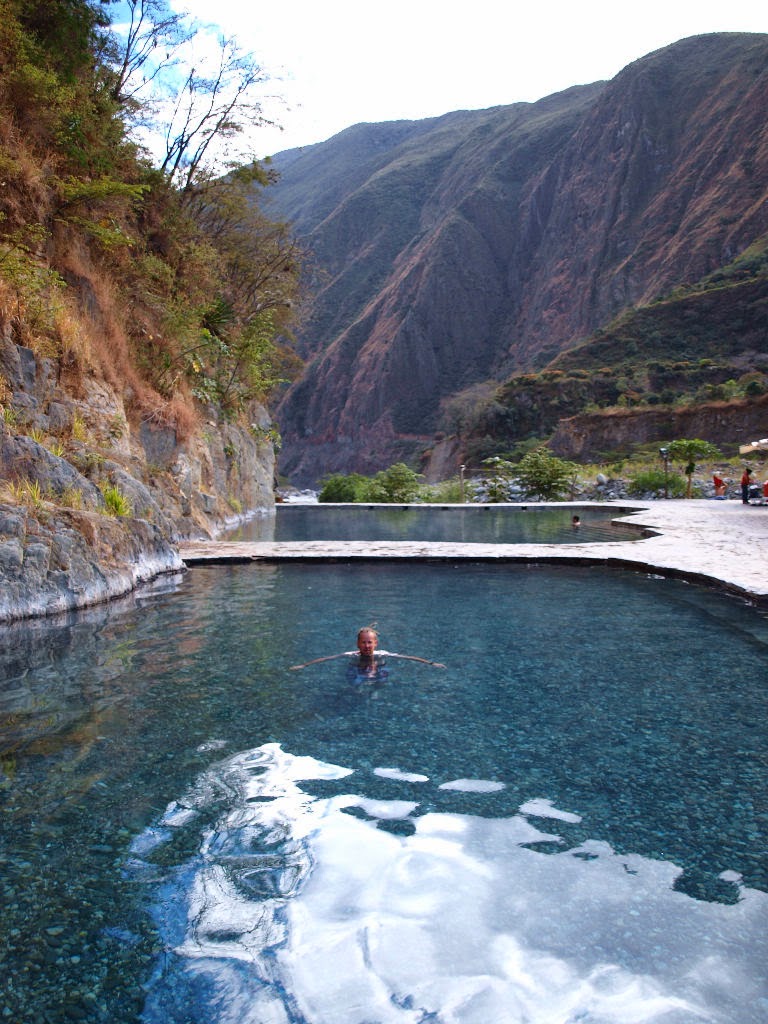 The water was crystal clear and ooohhhh so warm and nice....! 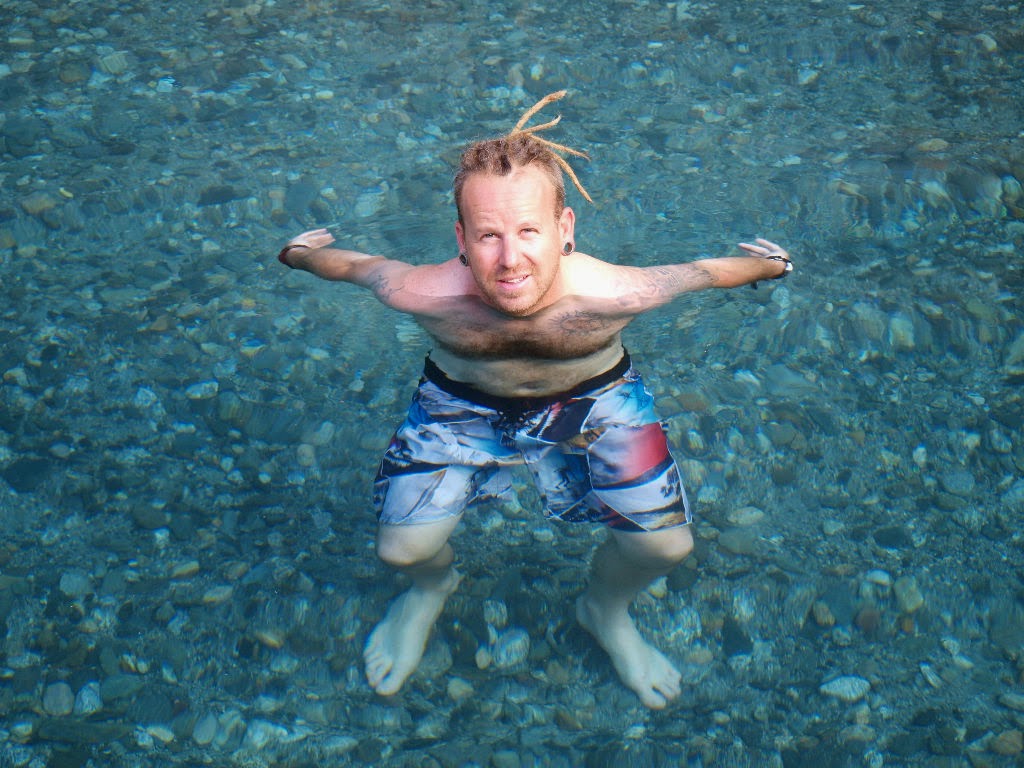 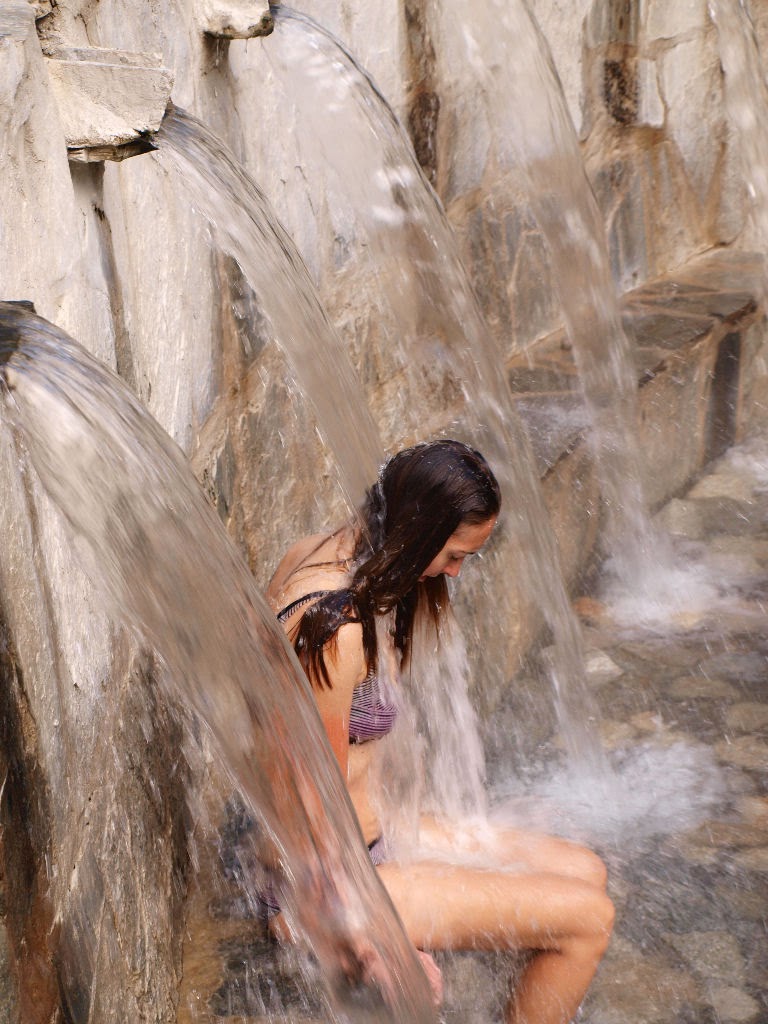 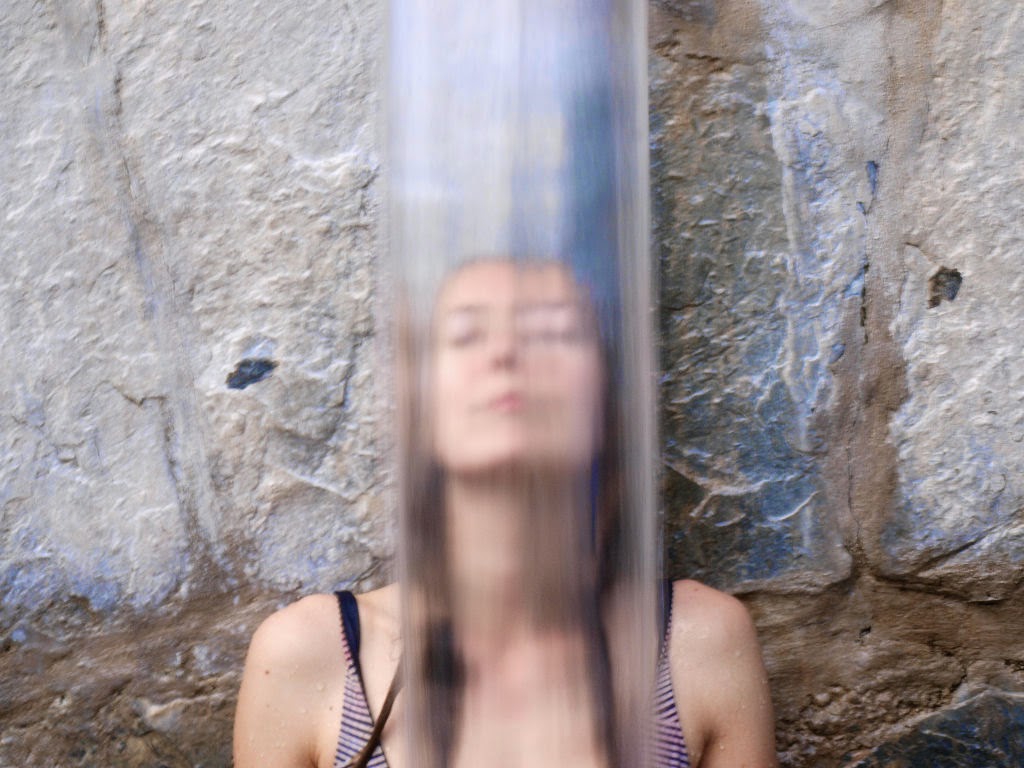 Finishing off with this oddly named dish we saw advertised... 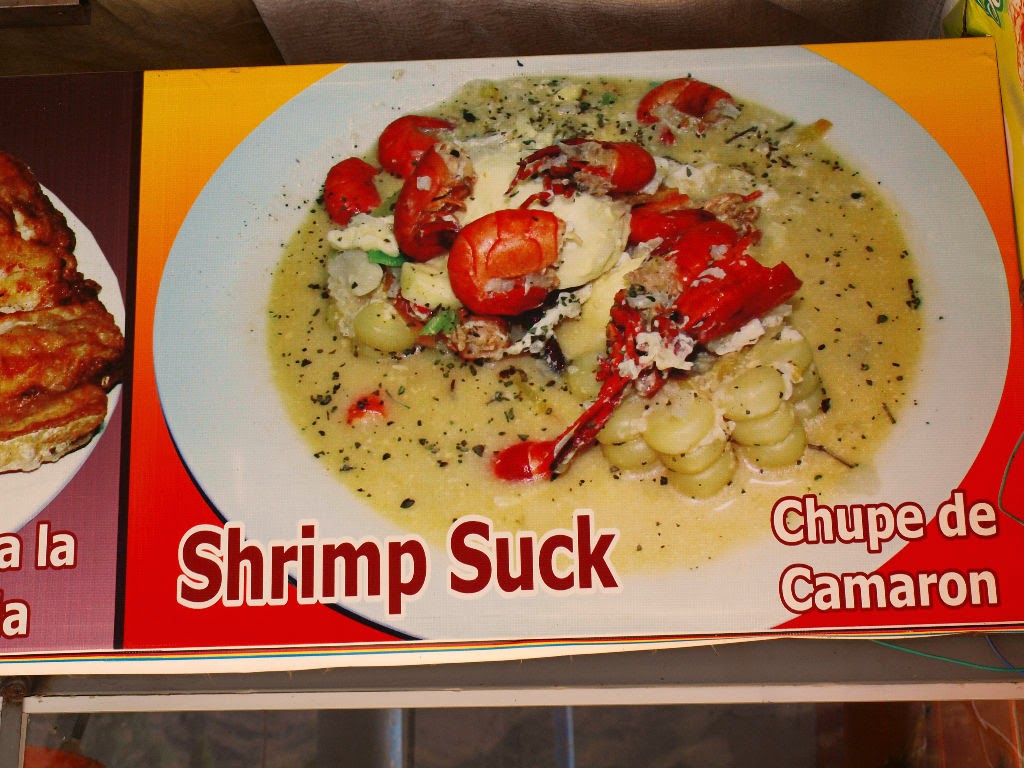