Another Day, Another State

After leaving beautiful Grayton Beach heading west, the weather just got colder and colder. We found out that the reason for this was a massive cold front that was affecting the US, covering many states in a thick blanket of snow. From what I could piece together, a typhoon in Alaska had managed to disrupt the jet stream and was now pushing cold air from Alaska and Canada down into the US. Most states were affected and temperatures dropped way below average. The Mid-West seemed to be the worst hit but it reached all the way down to where we were - in the Gulf of Mexico! We rugged up and pushed on through, covering the state of Alabama in half a day or so; not too much to see on the coast apart from big apartment buildings. Then we crossed into Mississippi. It was quite late in the day and getting dark. We had covered much less miles that day than we had expected to as we had deliberately stayed off the freeway and taken the Highway 90 which we thought would be more scenic. It wasn't. Instead it was just littered with traffic lights hence the reason that at 6pm we found ourselves riding in the dark on a busy highway not having a place to camp. We knew there was some sort of state forest ahead but we were completely knackered after our long ride and tired and grumpy so we found this little dirt track off the highway that lead into some abandoned land. It was not very scenic but it was free - all that matters really!

We have now been in the US for 25 days and have only paid for 6 nights accomoodation so far. The rest has been a mix of staying with couch hosts, ADV riders and bush camping in forests. Luckily you can camp for free in state forests across the US. You just have to be careful there's no hunt on at the time. Like when we rocked up in a forest and found the so-called hunt camps full with camo-clad boys looking like they were going to war. I'm not joking, they had trucks like the military uses to carry soldiers! I wouldn't call it a peaceful-looking camping setting by any means! But people in this part of the world take a lot of pride in their camouflage clothes; they wear it everywhere, to the shops, to McDonalds...you name it. It seems to be just their daily uniform really.

Other oddities we have seen include a man carrying a cross down the road. I'm talking about a big-ass cross made out of wood. This man was just dragging it down the road in the middle of nowhere - like a present day Jesus! It is pretty obvious that this is the bible belt that we're riding through here. There are loads of churches, many of them with signs saying stuff like: God Is Awesome! When I went to Walmart one day to look for a new book to read I was overwhelmed with so-called "inspirational choices" such as God what can I do, Talk to me Jesus, Jesus Calling, Illustrated Guide to Biblical Battles not to forget a Sarah Palin biography.

Seriously though, although people here clearly have very different lifestyles from us, I can't understate how friendly folks are here. Several times a day people come up to us and start talking to us about our trip and so forth. Everywhere we stop, be it at a petrol station or a supermarket, we always get a "Where are y'all from" "How are y'all doing" and "Y'all have a good day now!" and if we're really lucky "God bless y'all". But always, always the y'all! I have taken quite a likening to the word y'all, so much in fact that I might just start talking like a southerner myself!

Anyway back to the story. After our stealthy camp next to the highway we awoke to a grey, cold morning. We packed up the tent in a hurry and stopped down the road for pancakes. Then we crossed into the next state Louisiana and onto New Orleans where we had arranged to stay with an ADV rider. What ensued was 3 awesome days in the company of Ceasar. On the first night we went out to Bourbon Street, the famous drinking strip in New Orleans. Because of the before-mentioned cold front the weather was absolutely freezing and we struggled to keep warm as we went from bar to bar.
The next day we went to do a favourite American pastime: going shootin'! Ceasar took us to a local shooting range with all his own guns, 1 riffle and 3 handguns. The riffle was the easiest to shoot with, the handguns had quite a bit of recoil, especially the Colt .45. Safety was quite good in there, we had to watch a video first and wear glasses and earplugs (it's very loud in there!).

It was a fun experience but I don't really see the fascination of it. After about an hour I was ready to call it a day. I had a chat with the old boys running the joint and they asked me about the gun laws where I come from. I told them that in both Denmark and Australia people generally don't keep guns unless they have a hunting license. I told them that in Australia there was a mass-shooting in the 90's and after that the government put in place a national buy-back scheme for guns which was successful  in eliminating lots of guns. The men's response to that story was: What a shame one person ruins it for everyone. I was like, ruin it? His friend cracked up laughing: I don't think she sees it like that! I told them that in Australia we don't fell like we need a gun to protect ourselves. Their response: Here you do! These men echoed the paranoia we have been hearing ever since we've been in the States. People here really feel like they need a gun to protect themselves. They are afraid that with more restricted gun laws, all the guns will be owned by criminals and they won't be able to defend themselves against them. Also, they believe it's their right because it's in the constitution. We have been asked by people here if we carry a weapon while travelling and then get a surprised look when we say no...

We left New Orleans and rode all day to Lake Charles where yet another ADV rider, Darrell, had set us up in his dive shop. We slept on the floor in the pool house and was trusted with a key to the whole place without even meeting the owner until the next morning! We have come to really enjoy this ADV rider tent space site, where you can look up other riders all over the US who can host you. It's worked brilliantly for us so far and we plan on keeping on using it for the rest of the trip.

The next morning we left Lake Charles and rode towards Texas in heavy rain and it got worse the further west we got. Crossing the state line to Texas a sign greeted us saying: Welcome to Texas - Drive friendly, the Texas way. Straight after another sign states: Deaths on Texas roads this year: 2781.

Y'all have a good day now! 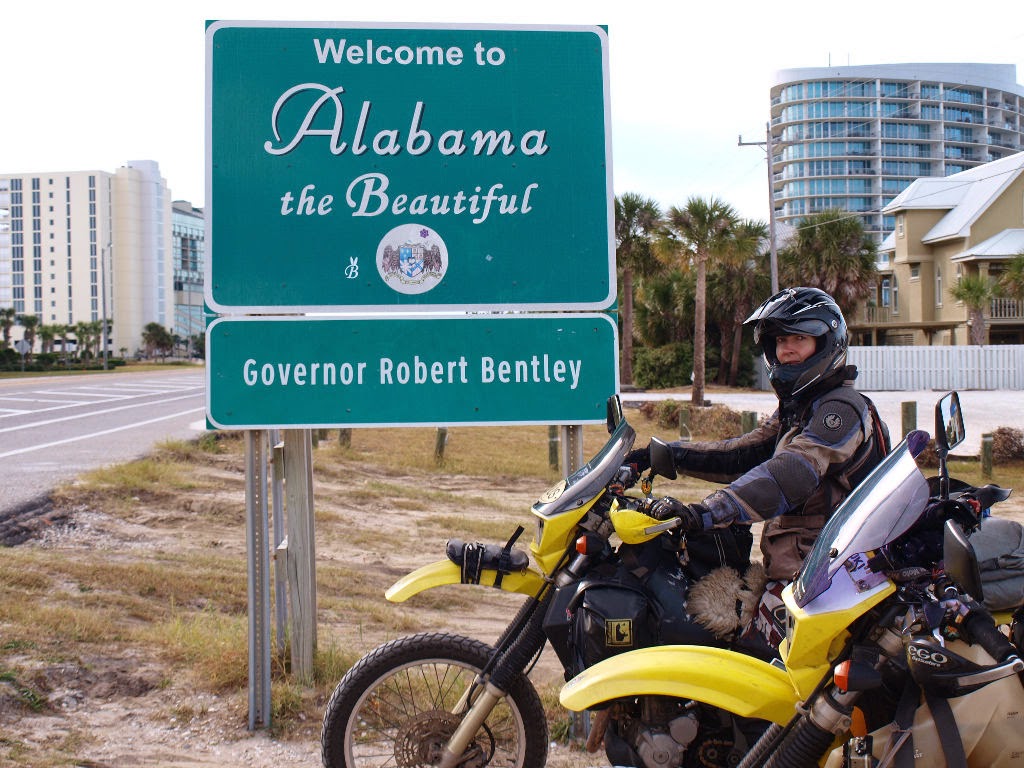 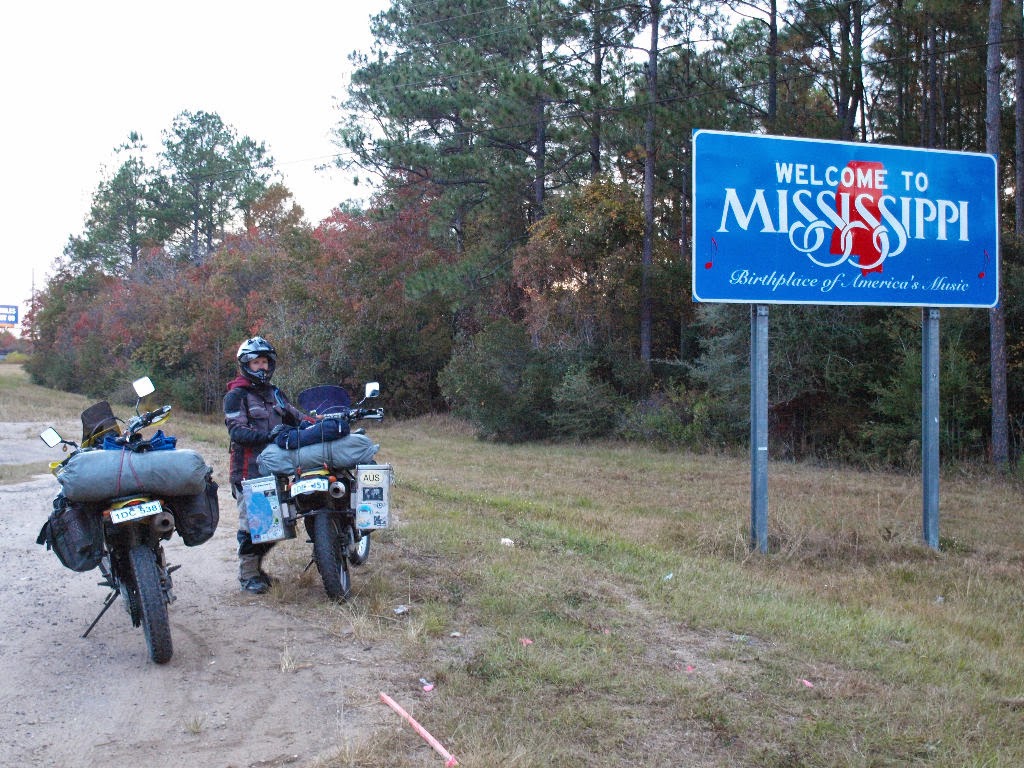 Our camp next to the highway 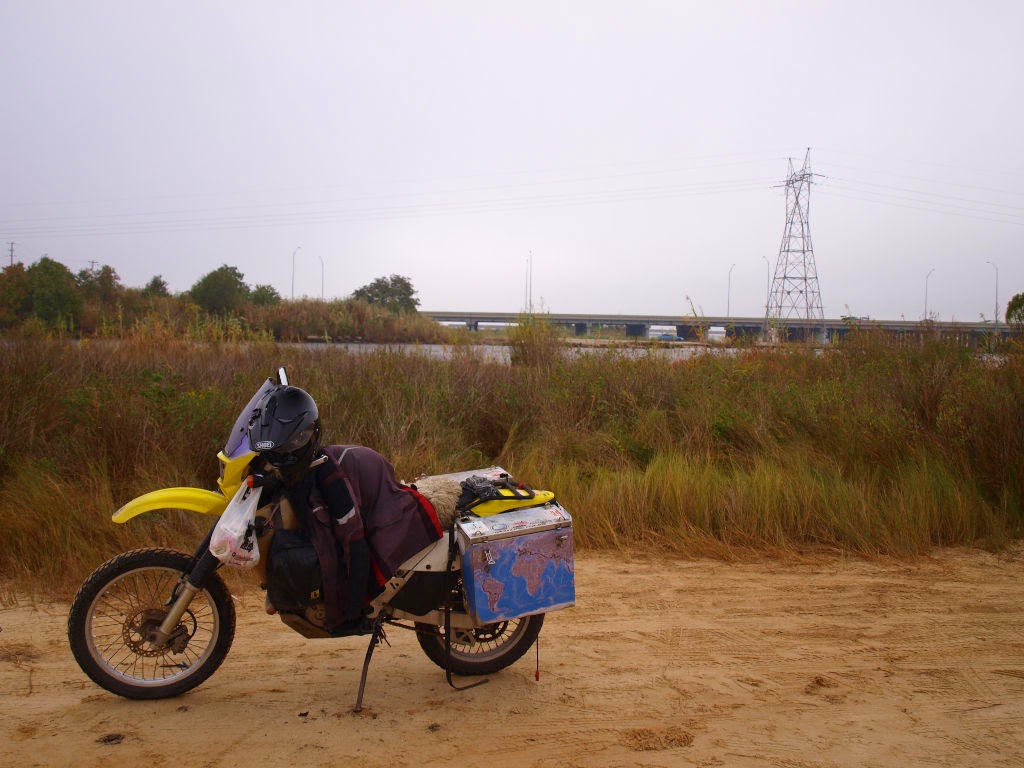 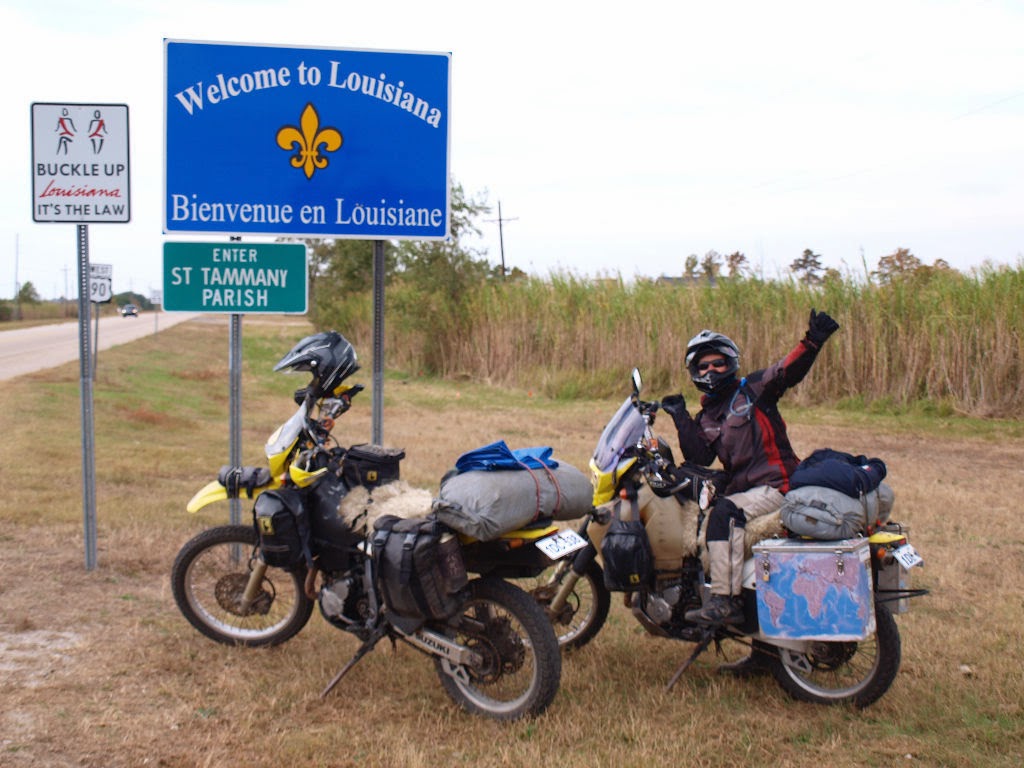 Typical style raised houses out in the bayous 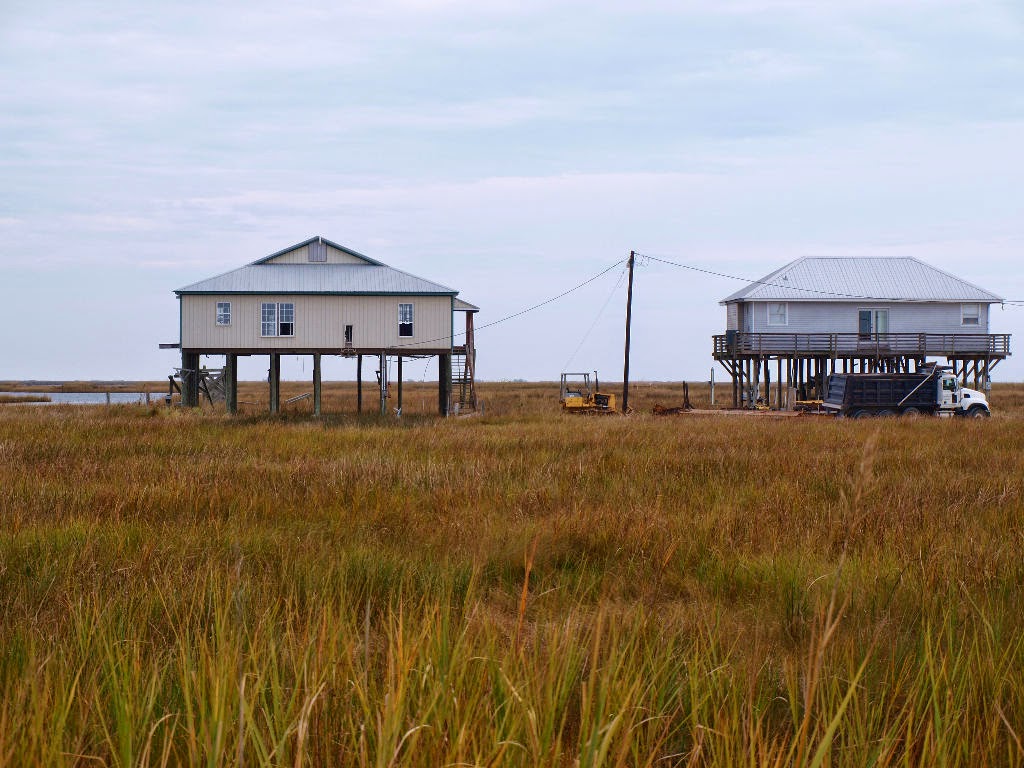 Morbid reminder of Hurricane Katrina:
The number at the bottom stands for the number of dead people found in the house by the military 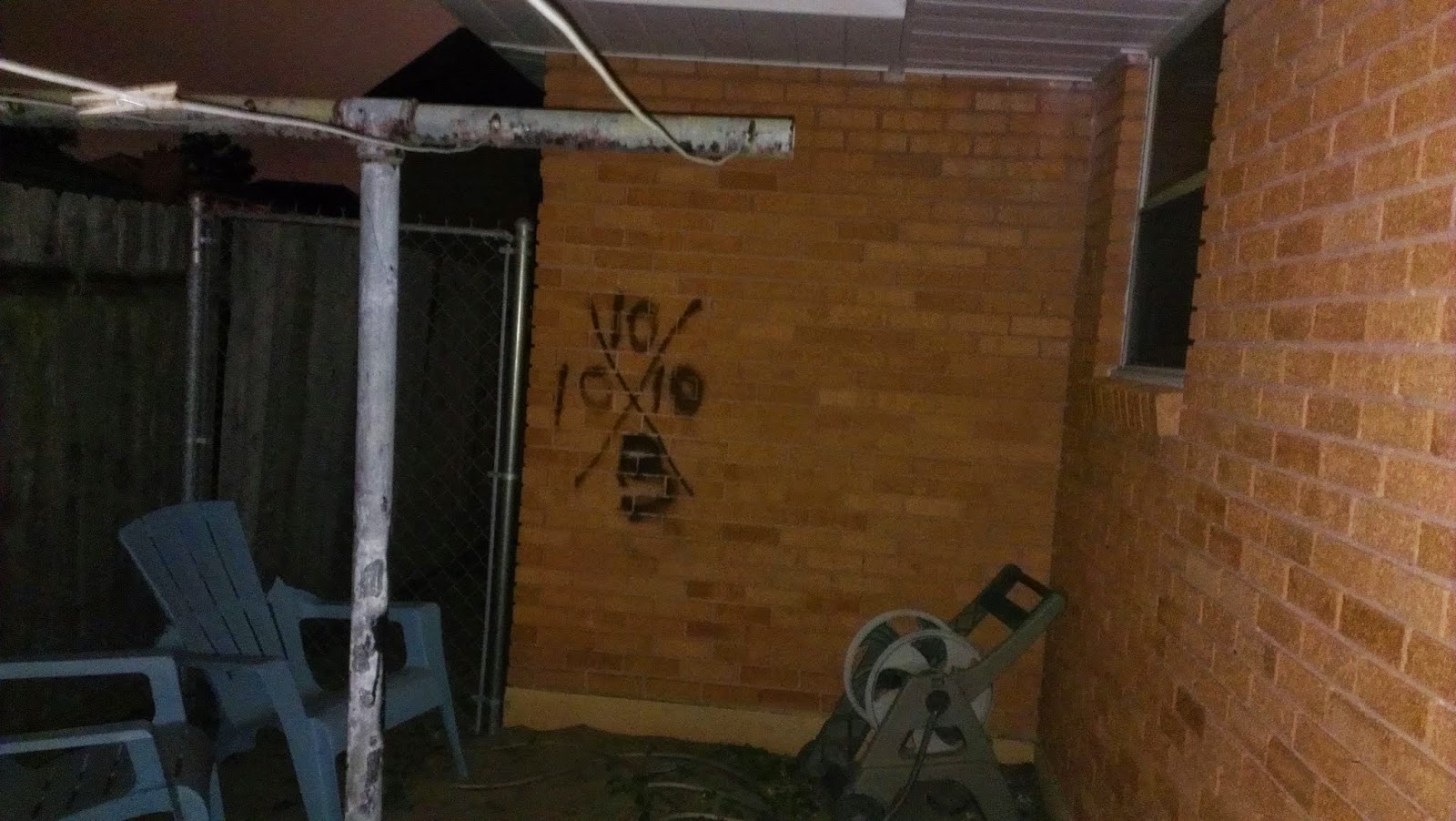 Out and about in Bourbon Street and freezing! 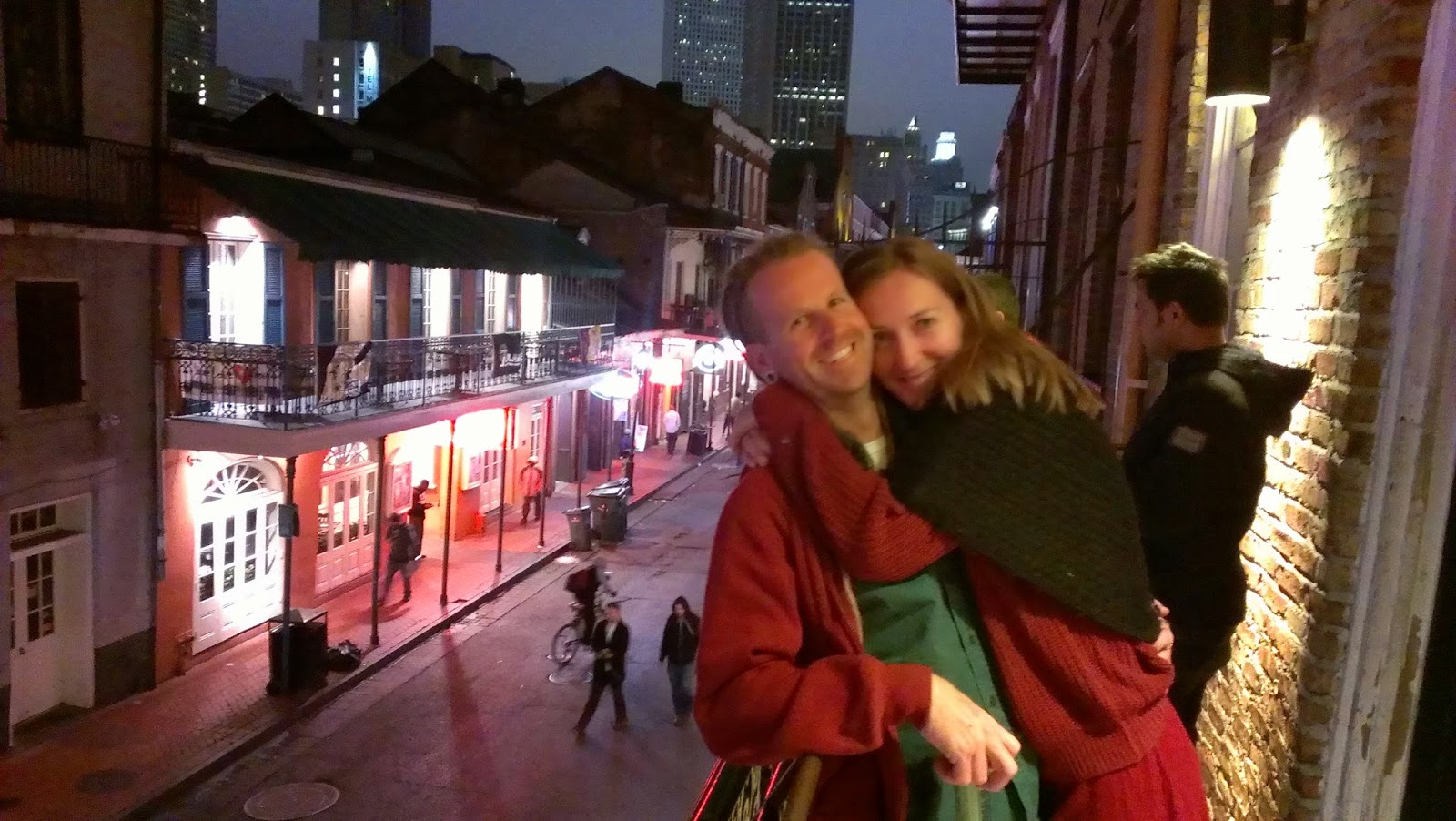 With Lynn and Ceasar 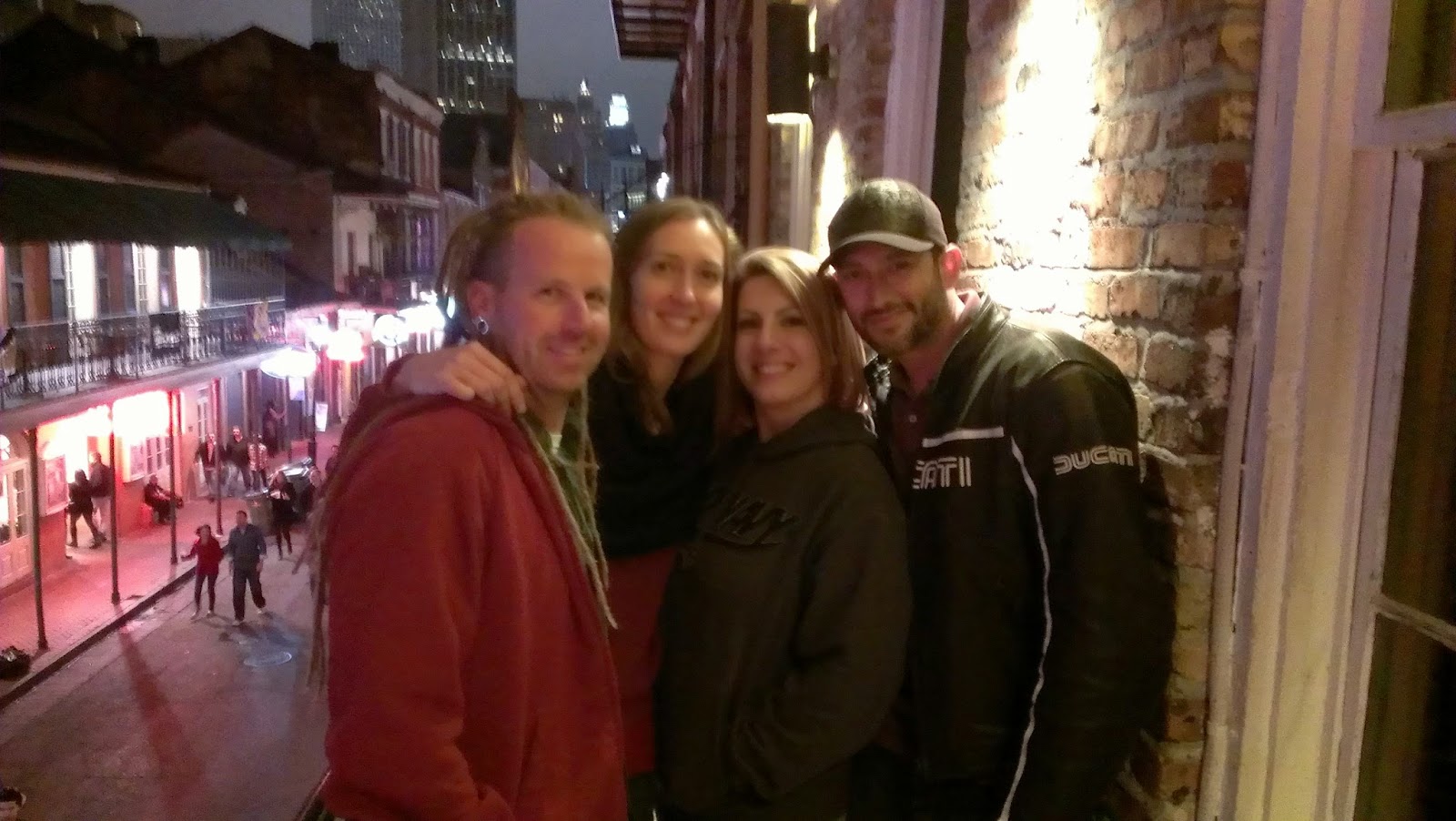 Time to go shootin' some sh*t up! 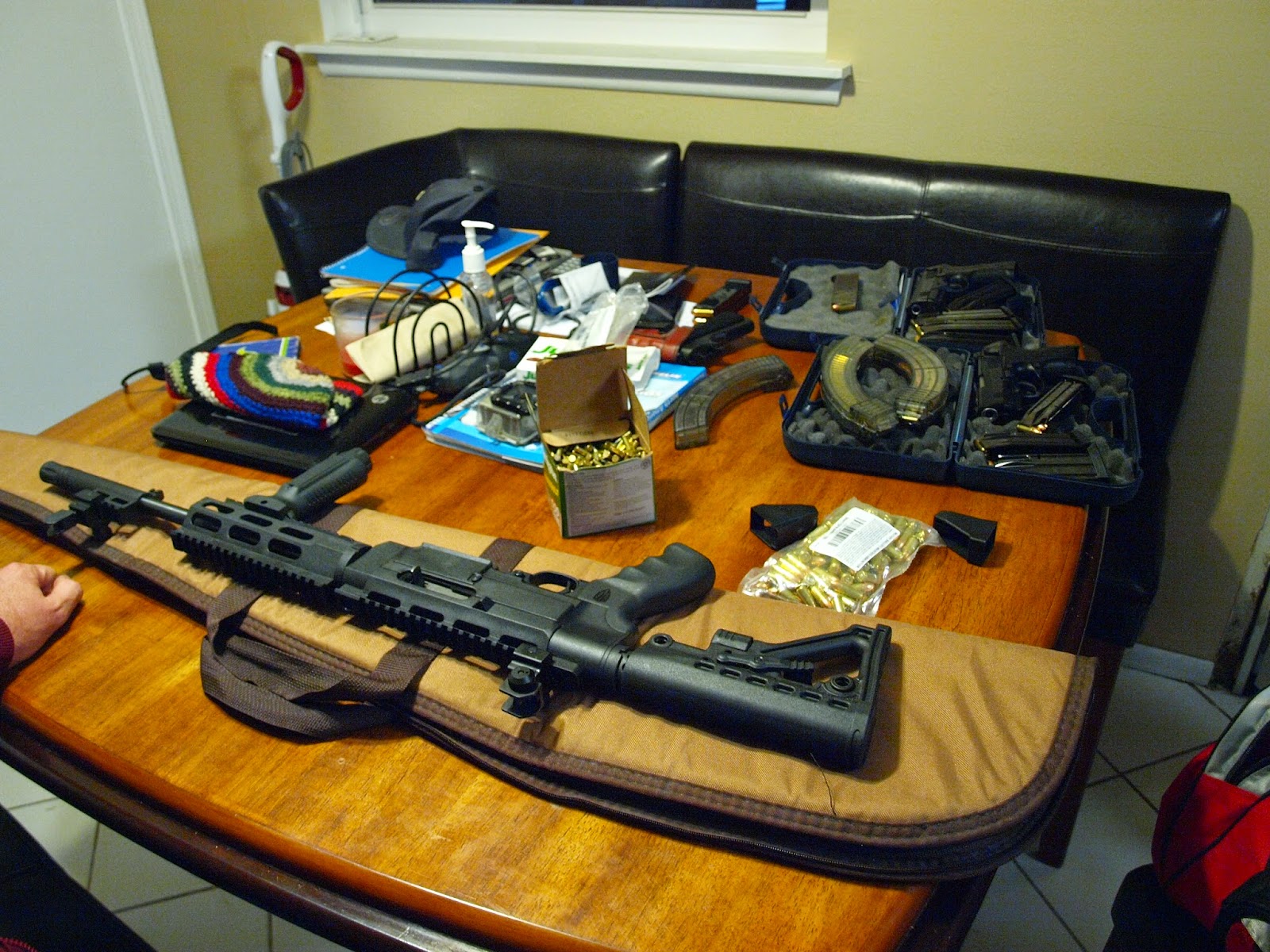 You can choose from several different targets to shoot at 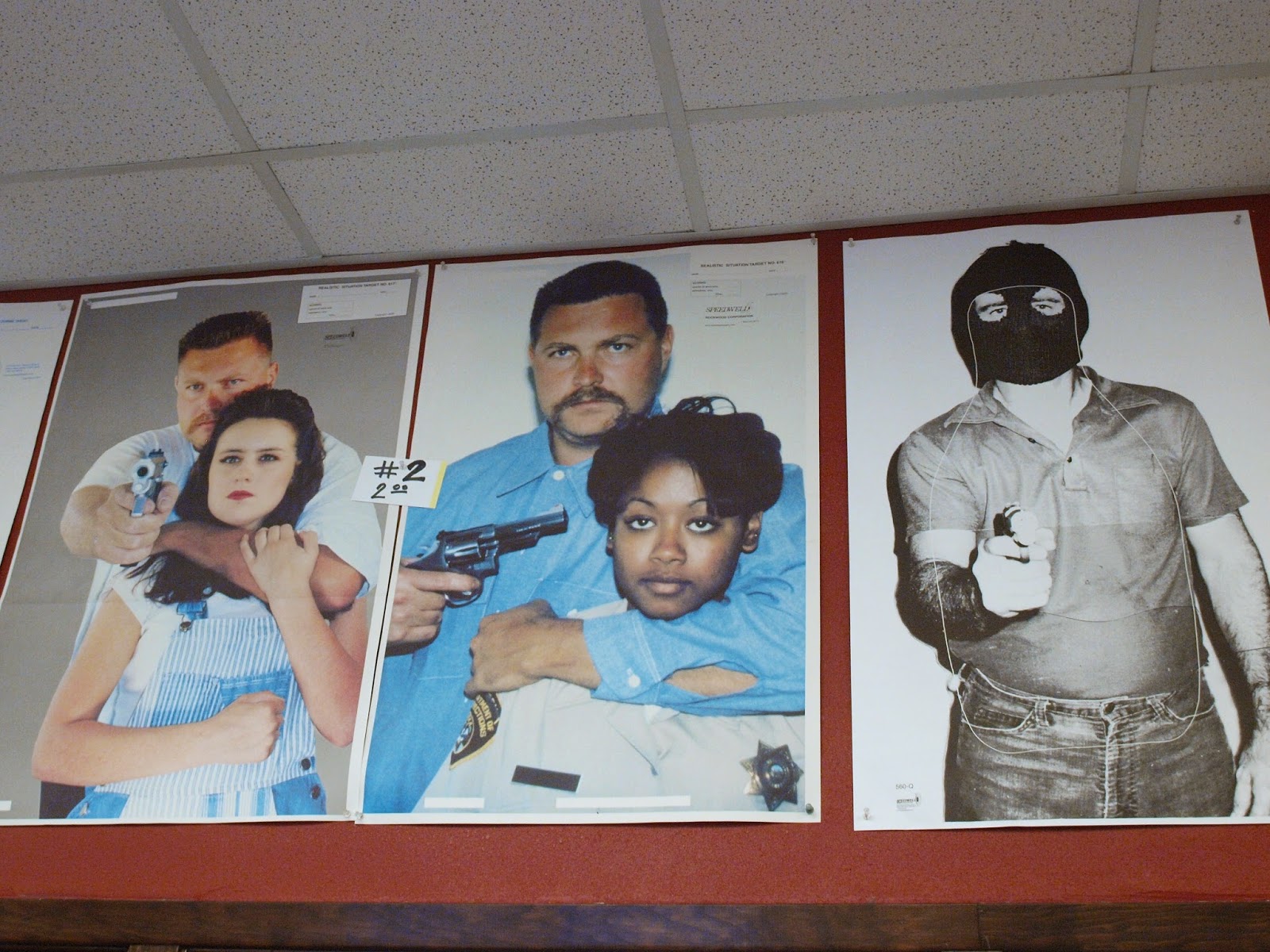 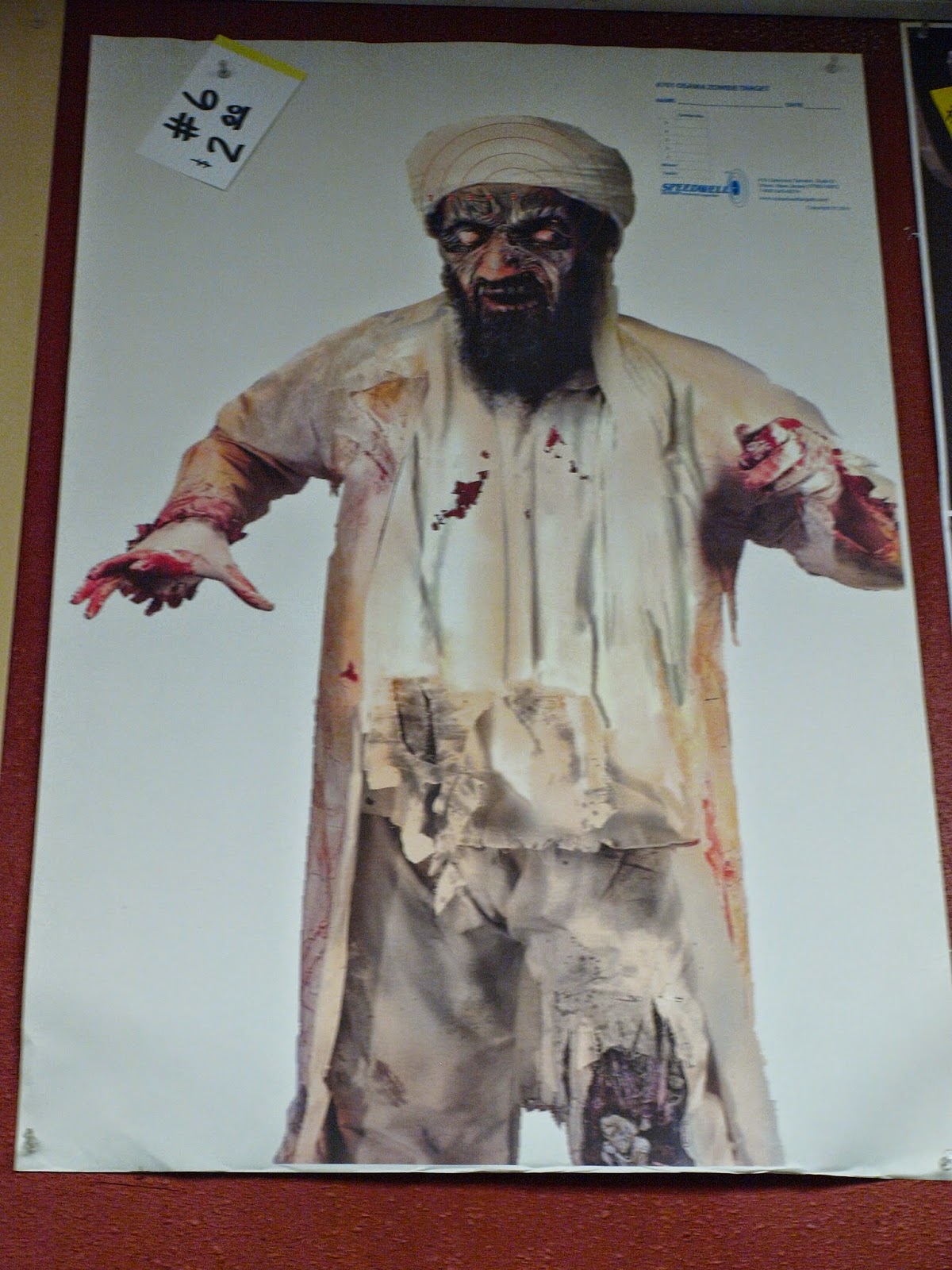 Mark having a go 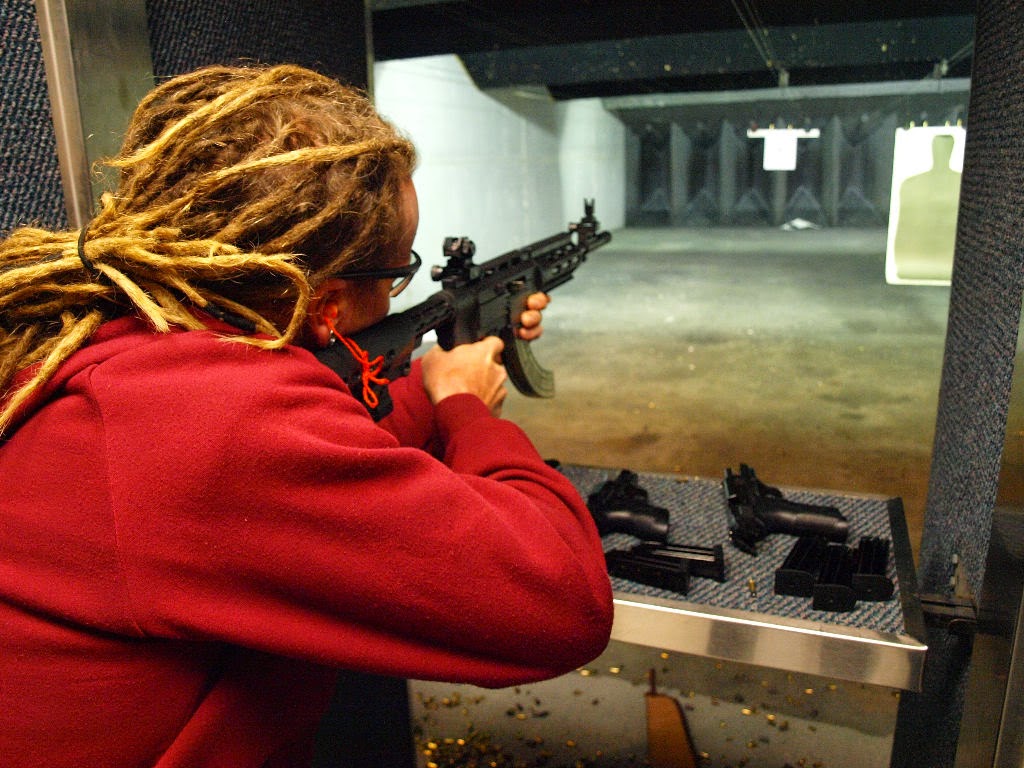 We had quite an arsenal to choose from 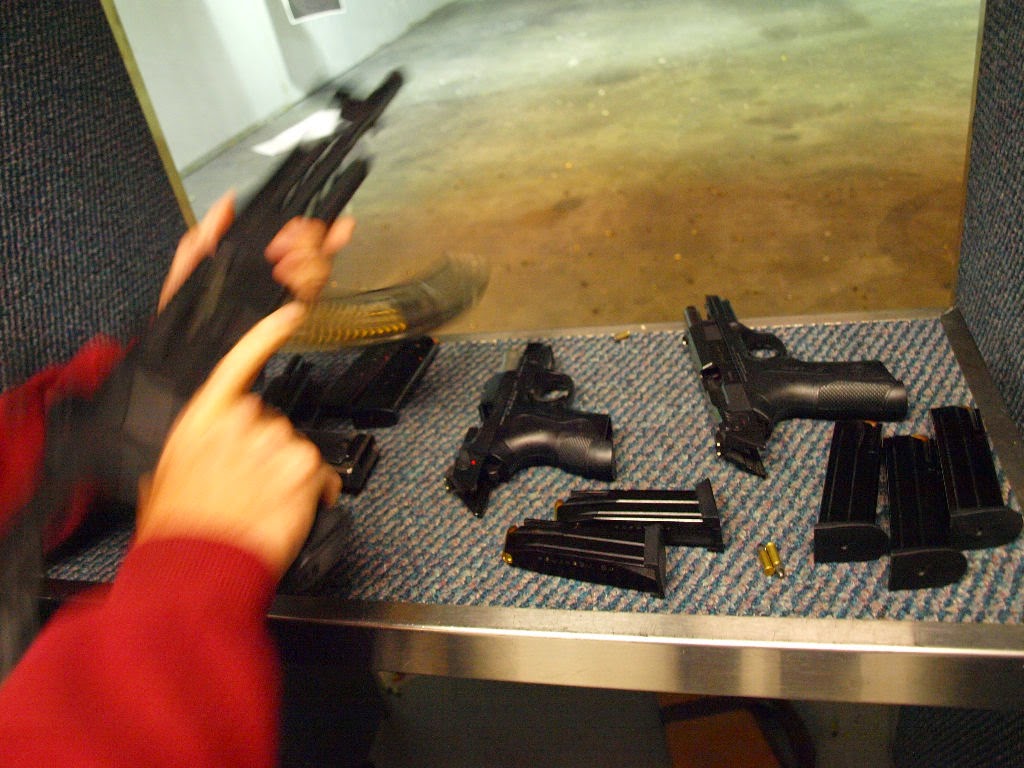 Then it was my turn 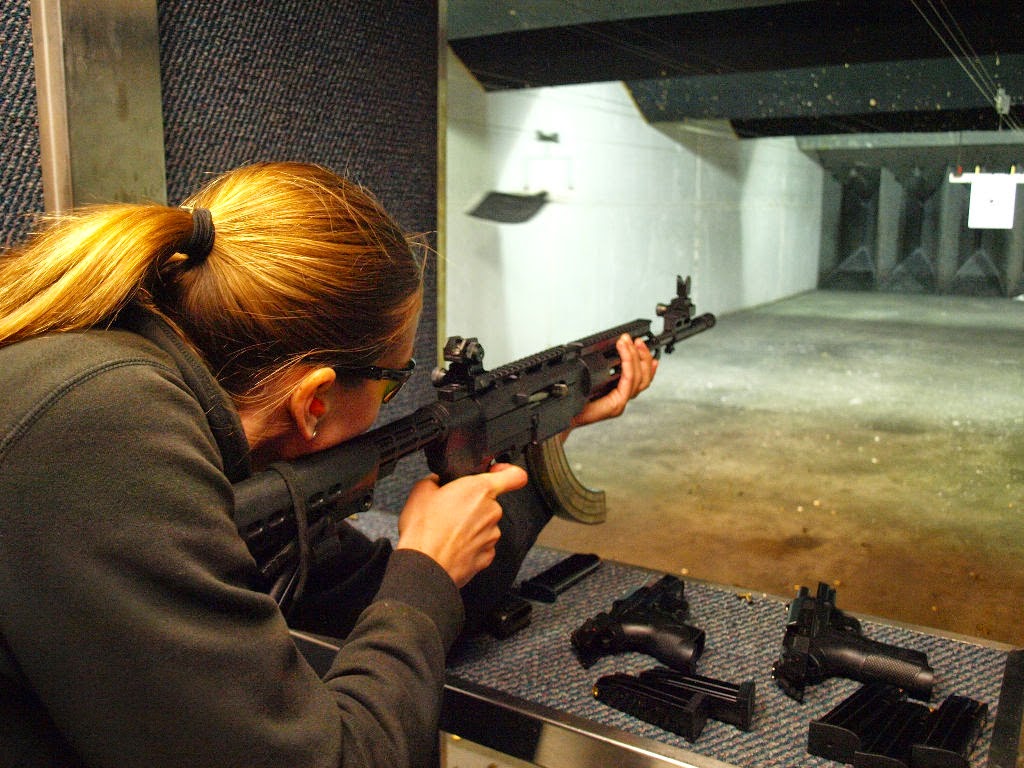 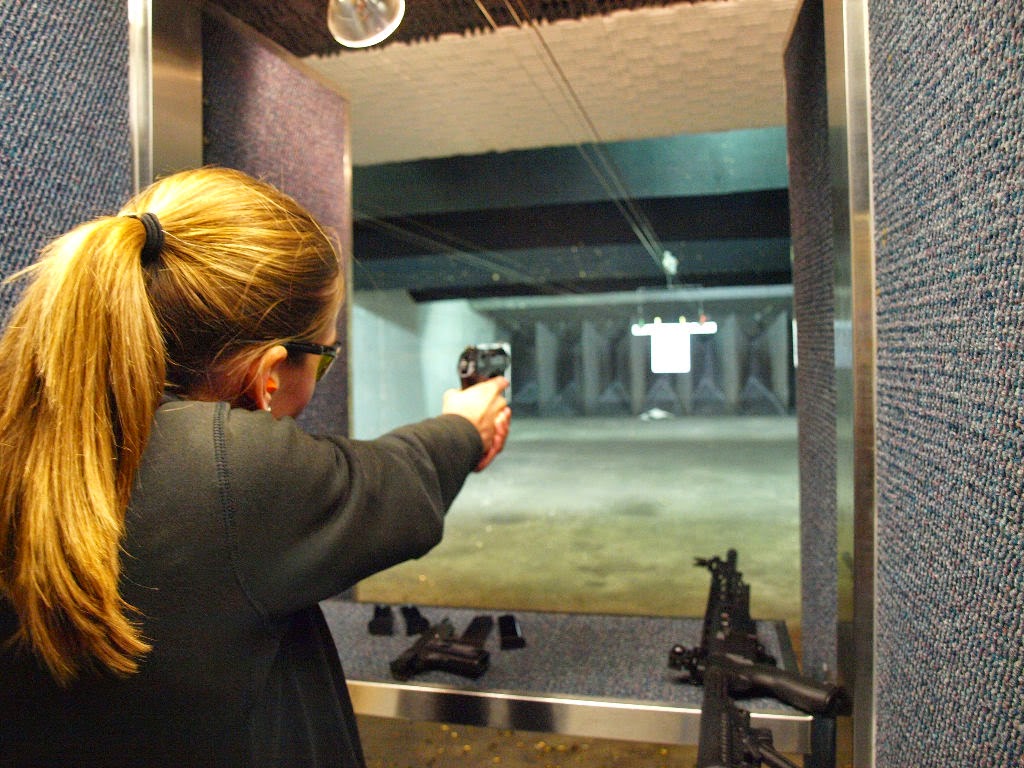 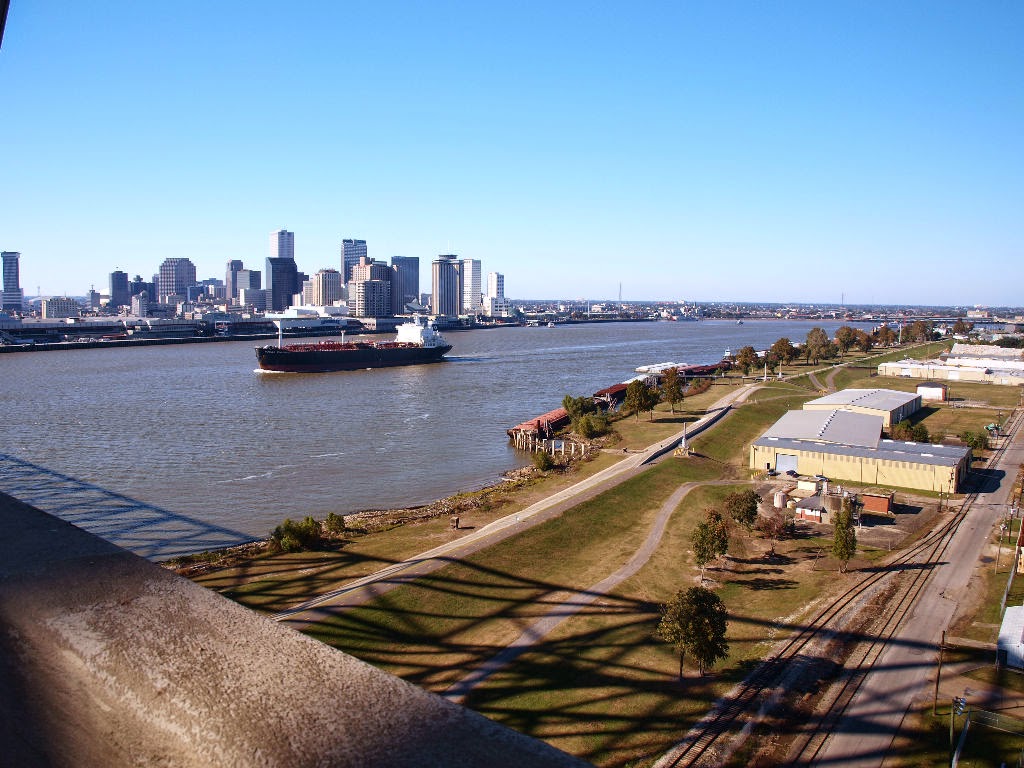 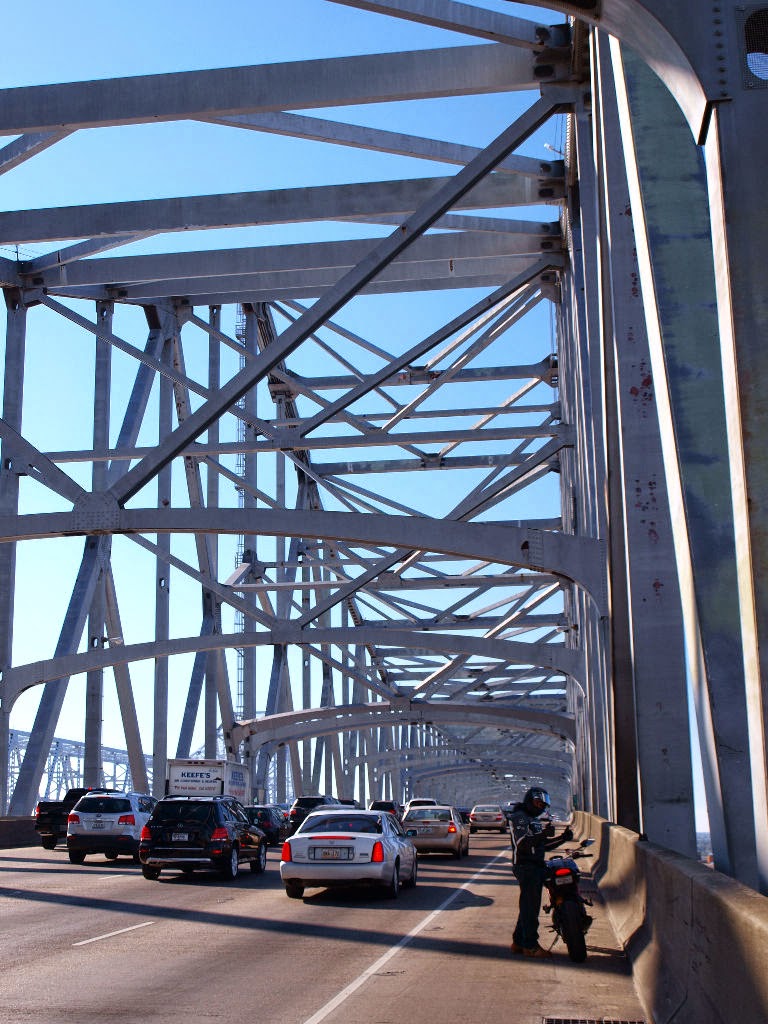 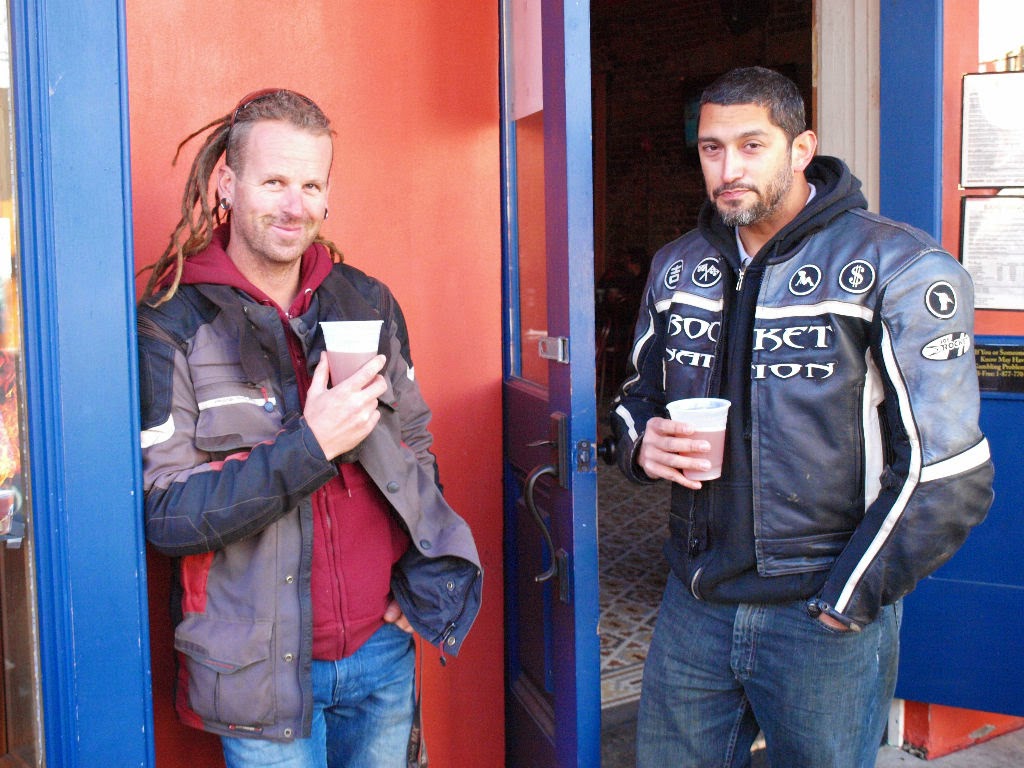 A walk around the French Quarter 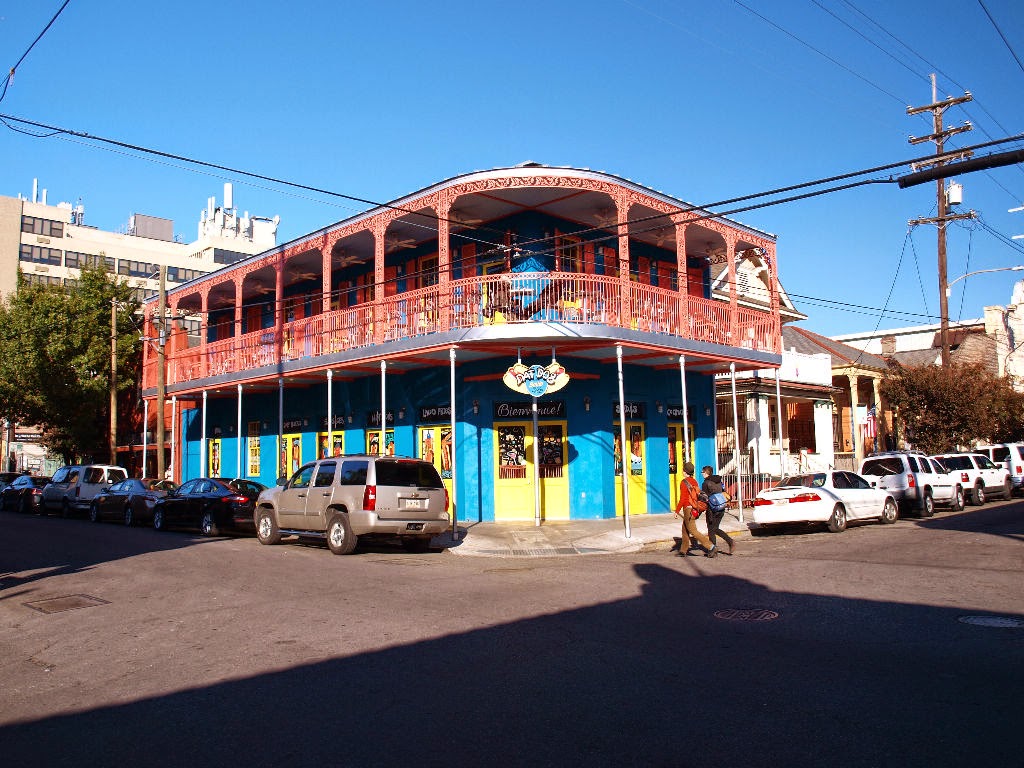 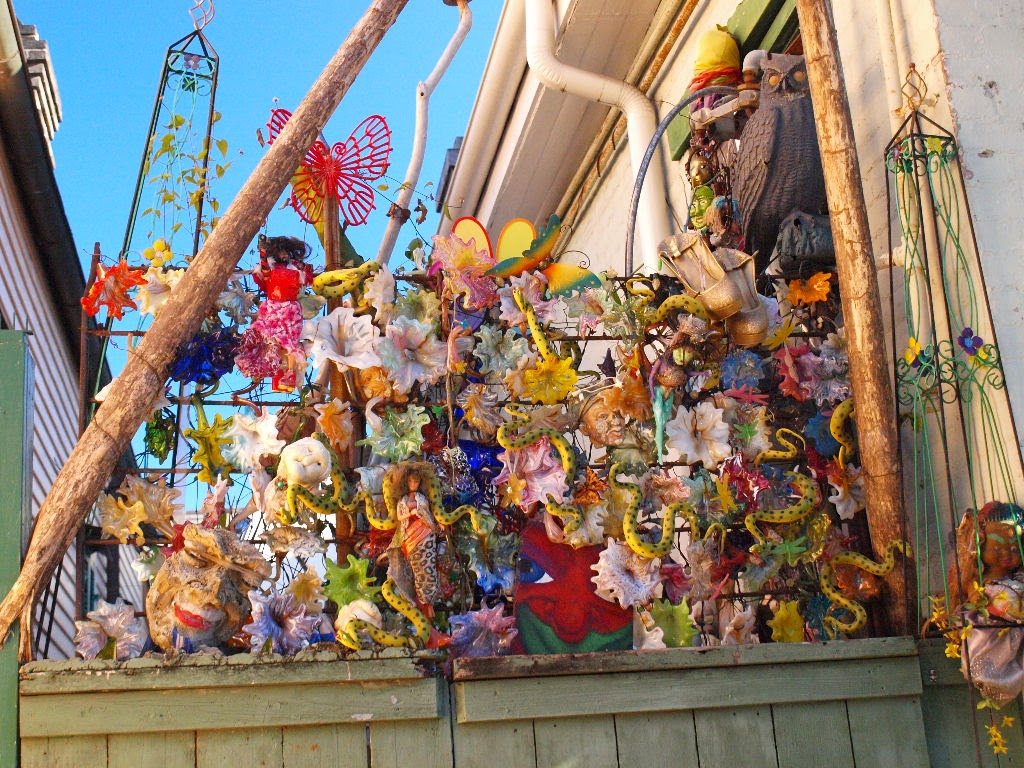 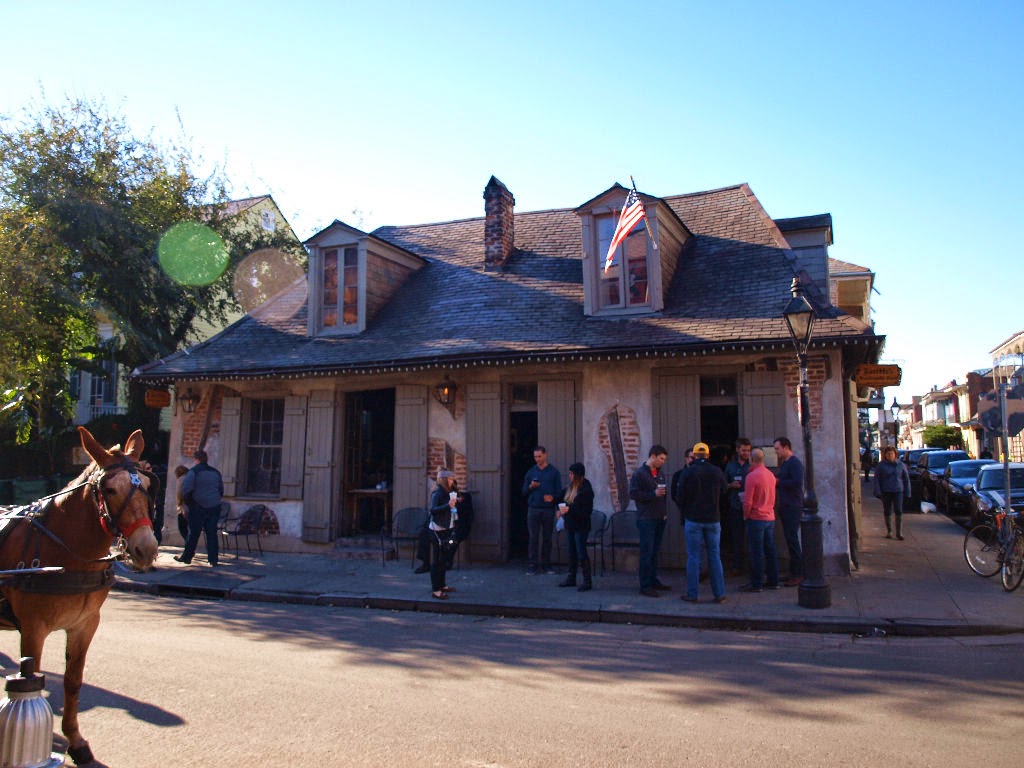 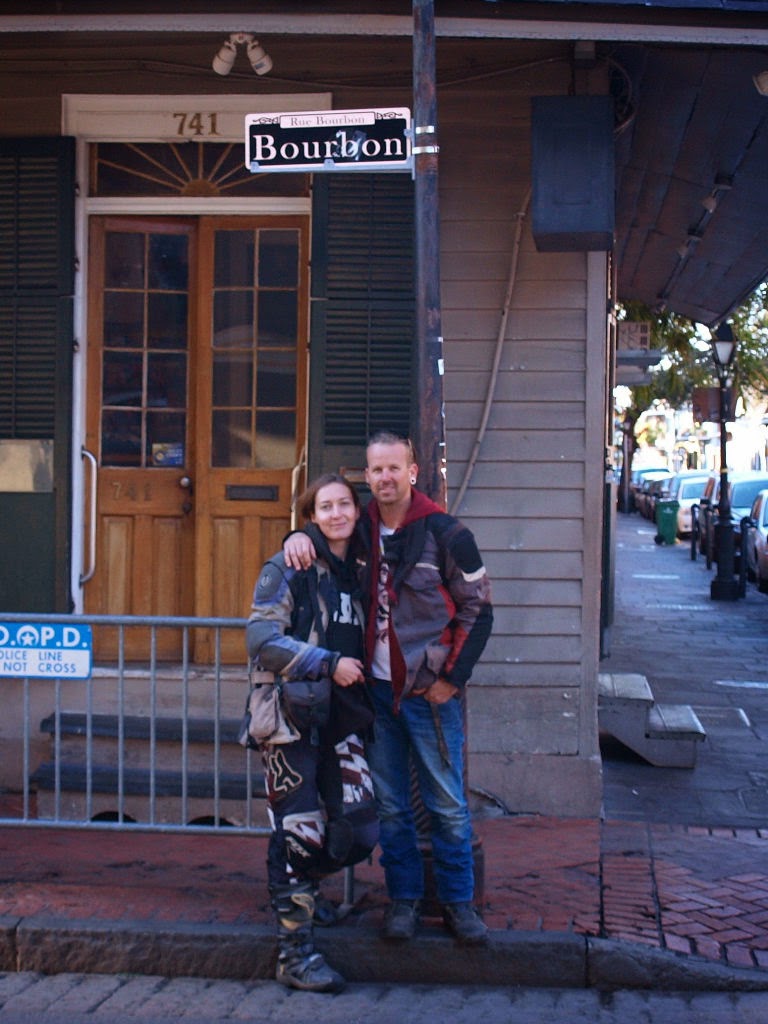 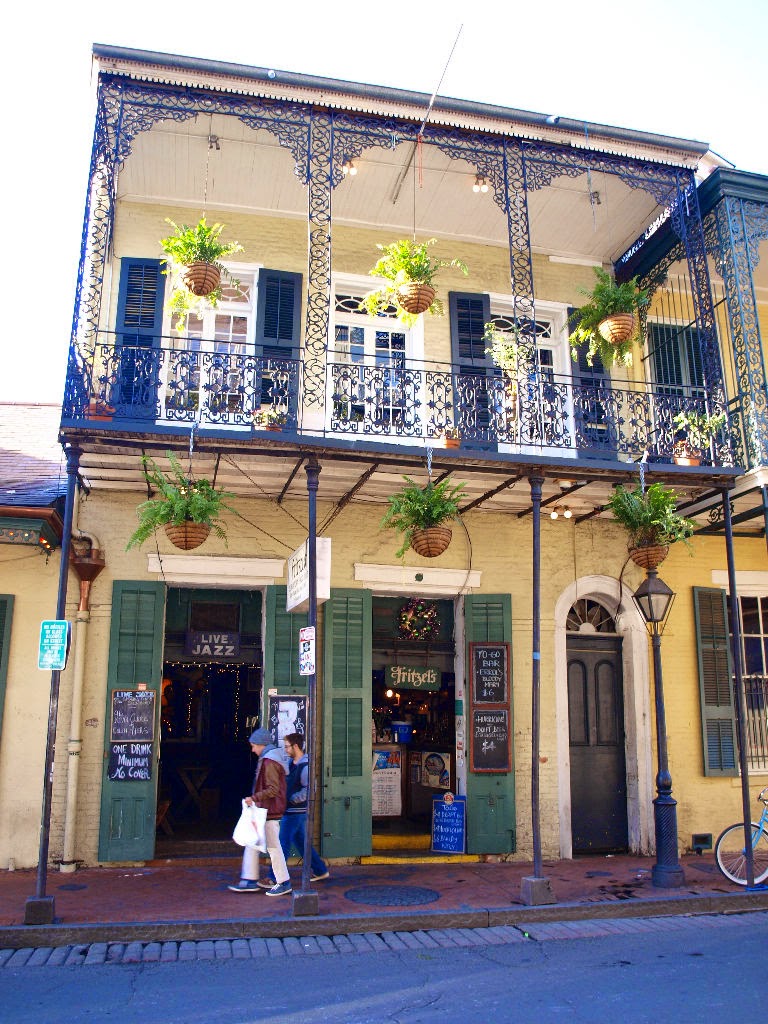 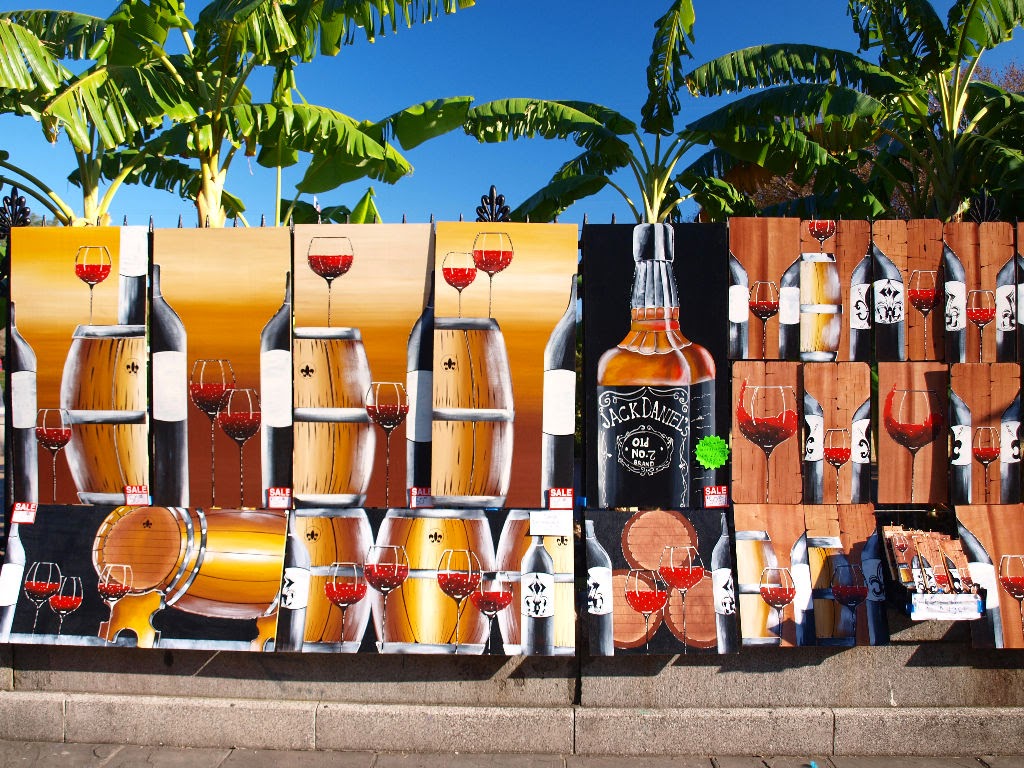 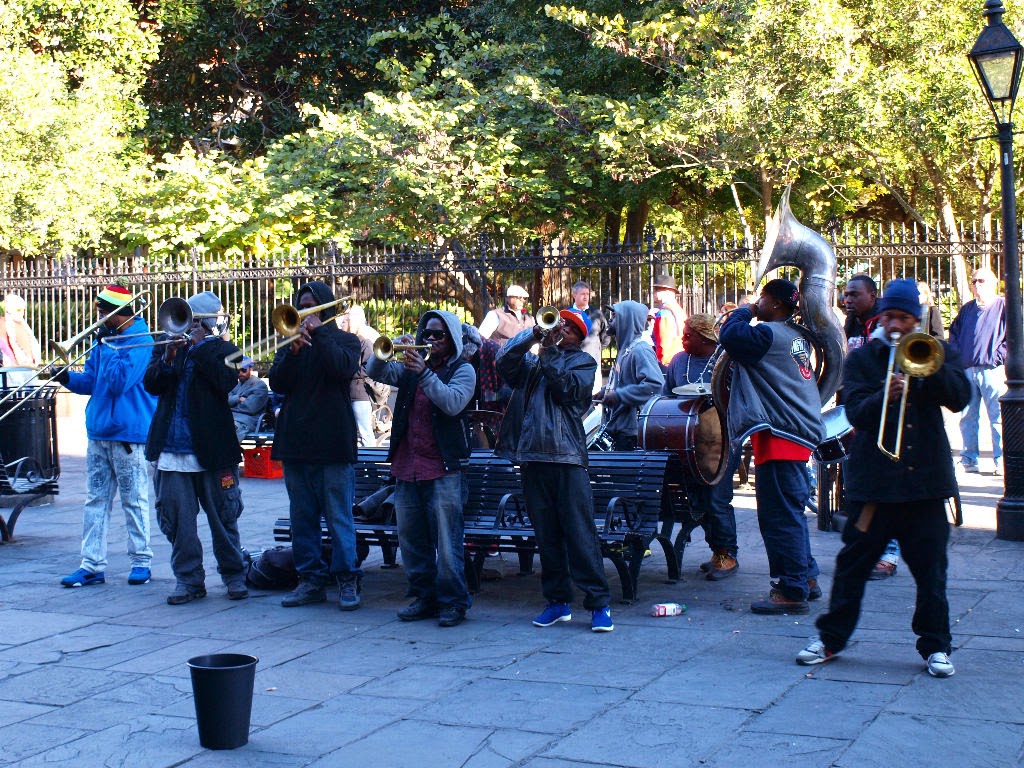 One of the oldest cathedrals in the US 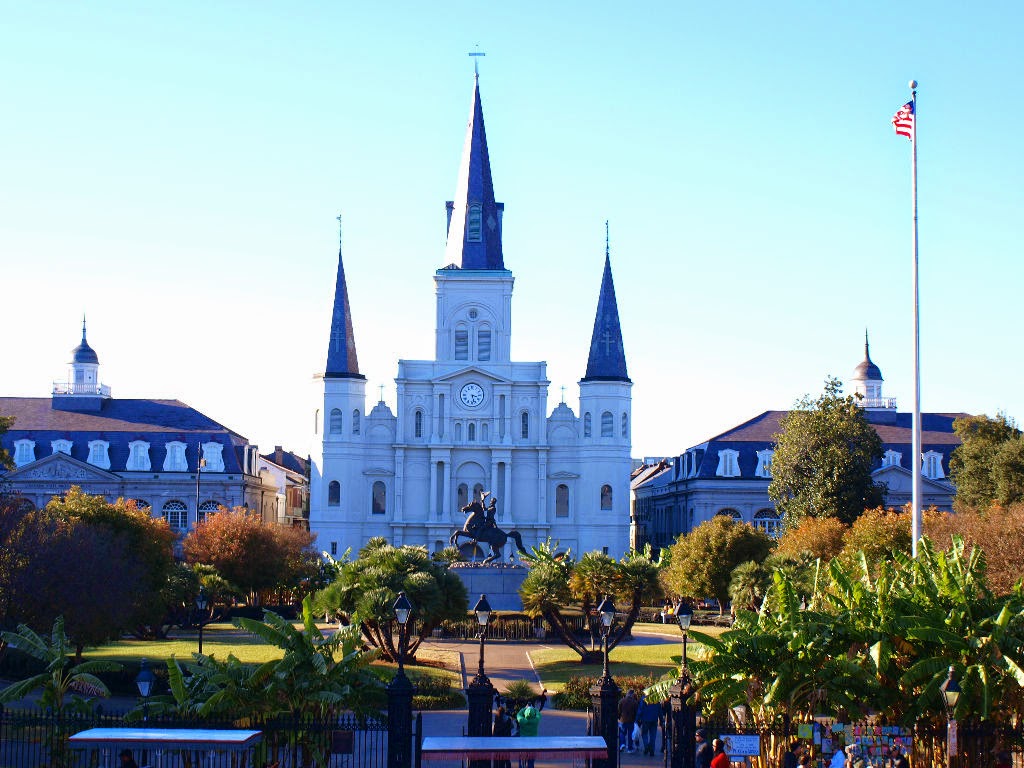 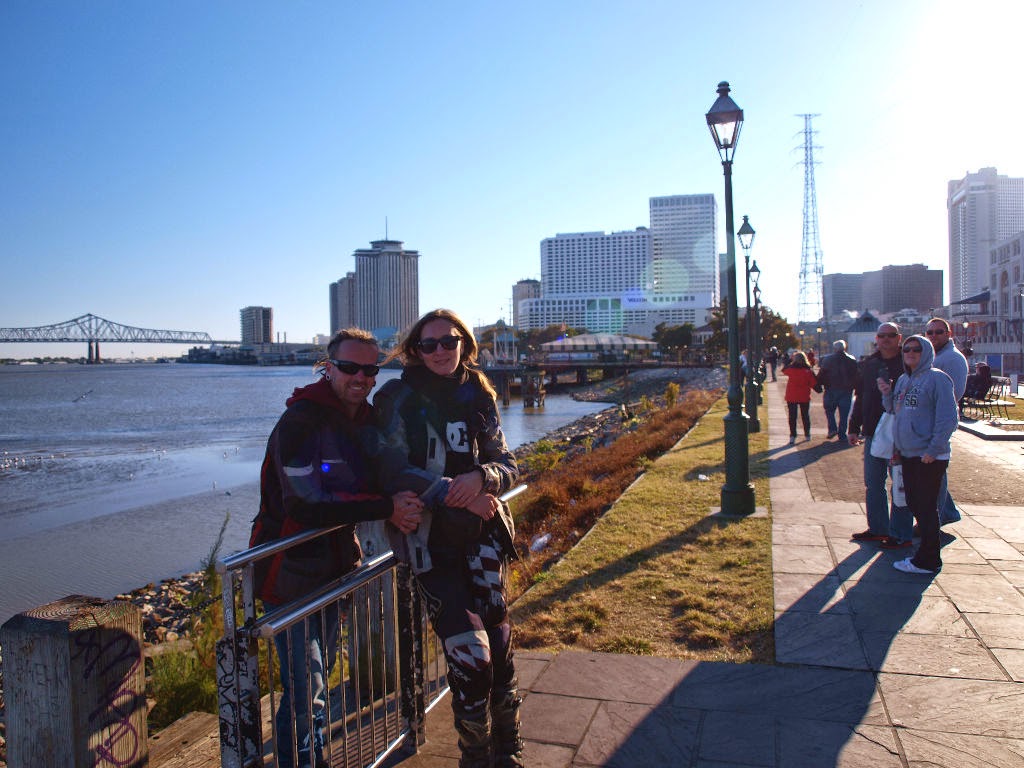 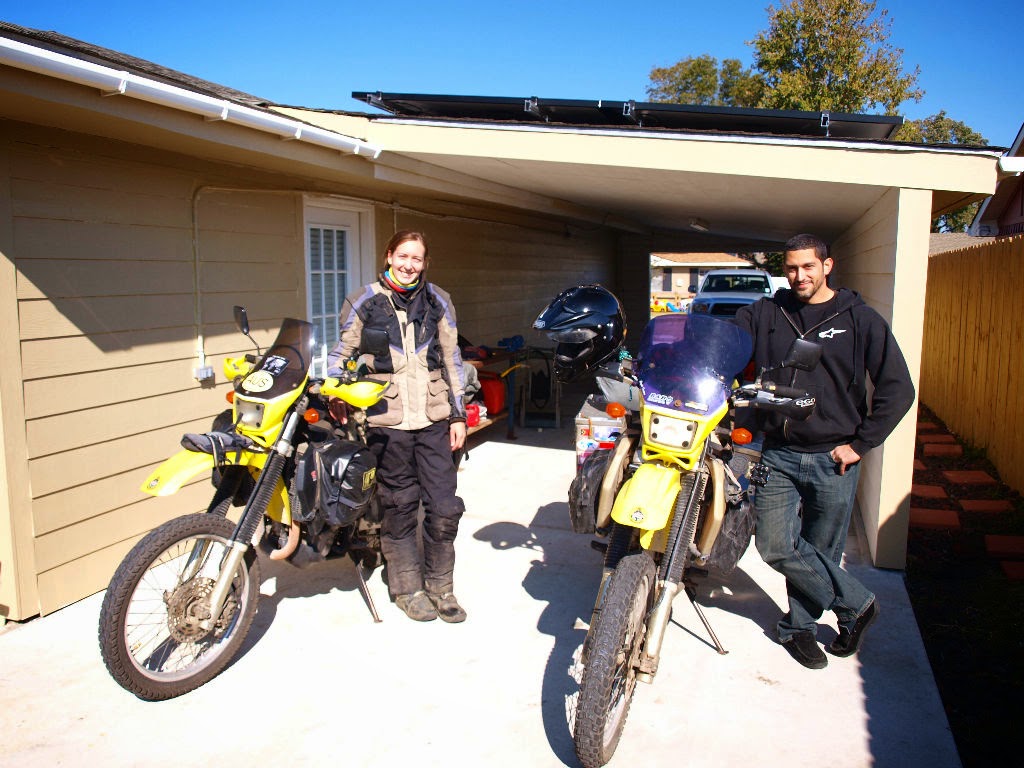 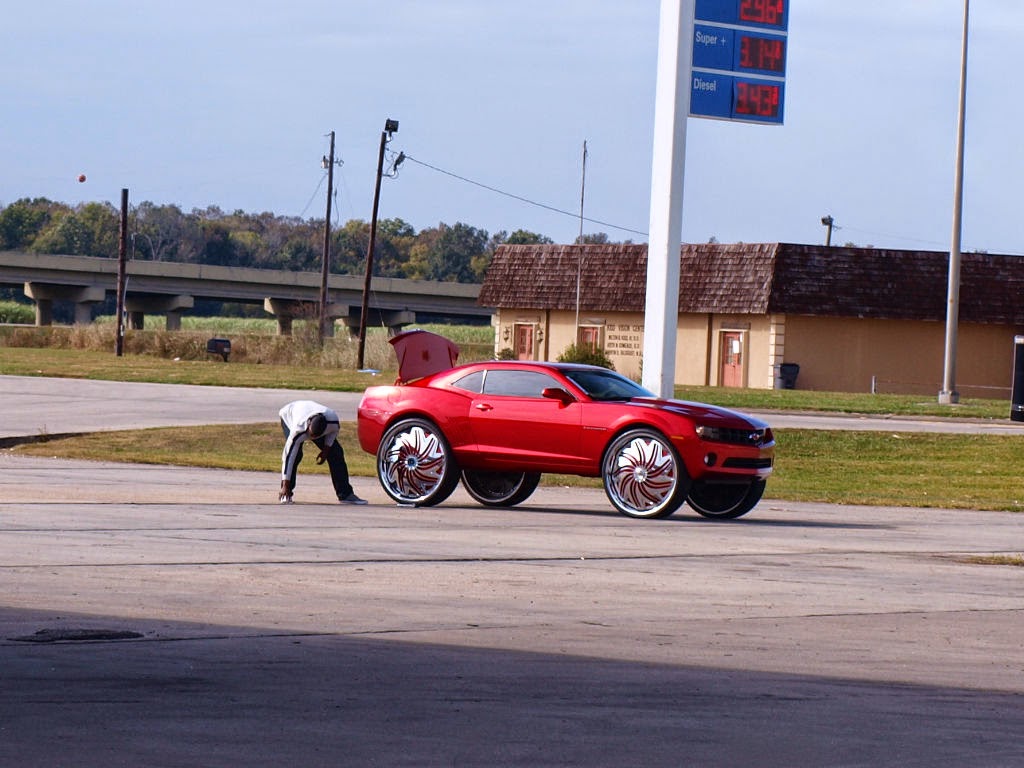 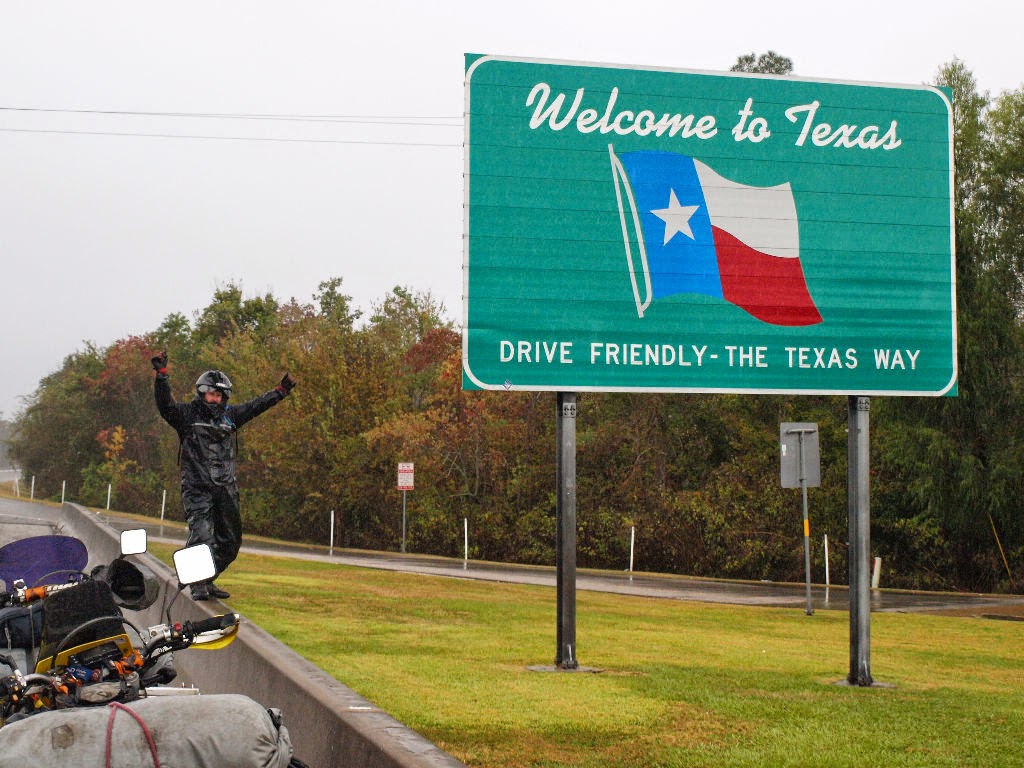