After leaving Prague we headed for Berlin where we were off to visit our good friend Frank. We were both quite excited to visit him, and were missing running into him on the road. We were also interested in visiting the city after a strange meeting from two American girls that we had met in Prague. After talking with the girls they had told us about their visit to Berlin and the differences between the east and the west. The had told us not to bother with the east and not to worry as they were sure our friend would live in the west so we would be ok. One of them even went on to tell us it took her two days to recover after her visit here. Well, I know they were from LA but come on, what planet really are they from! Oh that's right the centre of the universe if I remember hearing correctly...It just so happened that our friend lives on the east side and I would have to say that he lives in a really cool place, even with my dislike of big cities I could have easily have spent more time here, with plenty of cool bars and places to eat.

With plenty of history to the city we first took to it by foot to see why this place is meant to be like the slums, well we looked high and low and didn't find this hell on earth. We did come across part of the old wall with some great artwork painted on it. Where there is no wall there are now bricks laid into the ground where the wall once stood as a reminder to all.

We spent the following day out on the water on a small BBQ pontoon boat to celebrate Frank's birthday. It was cold and wet and were happy for the roll down curtain sides and of course the blankets. Feeling a bit under the weather I didn't drink and spent the day feeling pretty ordinary and dog tired after a late night and very little sleep. I did try to get a bit of shut eye but Stef felt that I should be socialising and proceeded to blow the emergency horn in my ear. Well, he should have never tried having a nap later in the afternoon and I soon got my revenge with the same wake up method. We then almost had a real problem on our hands when we went to pull up by the edge of the river for a quick toilet break in the bushes, we didn't make it and found ourselves stuck on the muddy bottom and going nowhere! Sanne managed to find some oars hidden away up the back and with some rocking and some muscle power we just manged to dislodge the boat and we headed for home.

We spent about four days in Berlin and had a great time with Frank and his friends and of course Stef who had come across from Hamburg. Luckily for us the weather held out for us one more time when we headed for Hamburg and to stay with Stef one last time before crossing to Denmark and finally making it to Sanne's family in Haderslev.


Part of the wall 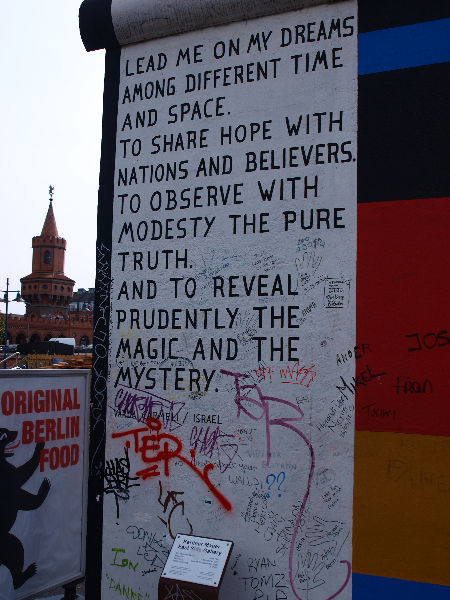 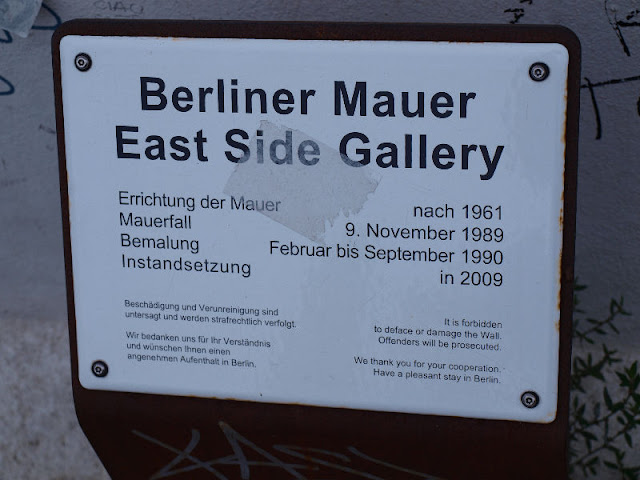 Lots of brilliant artwork on the wall 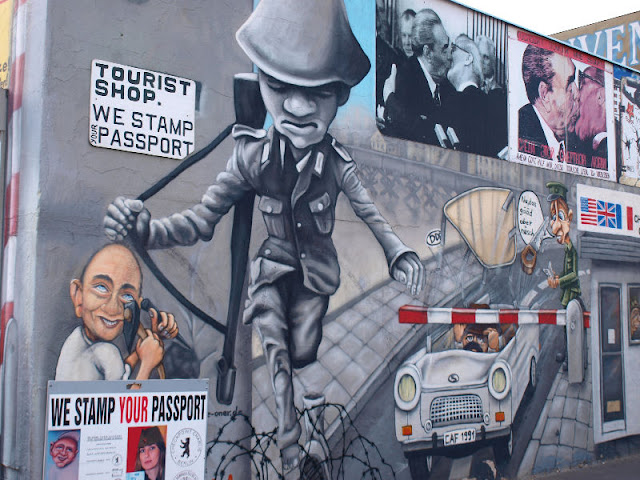 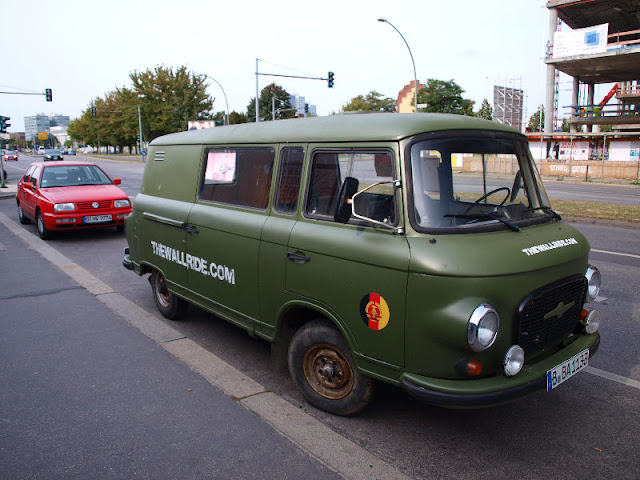 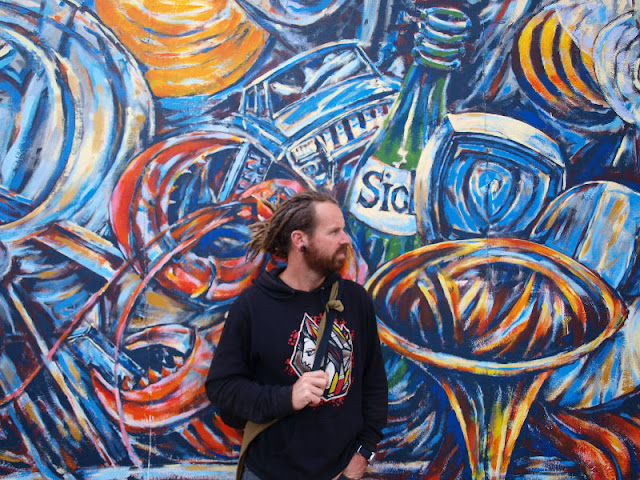 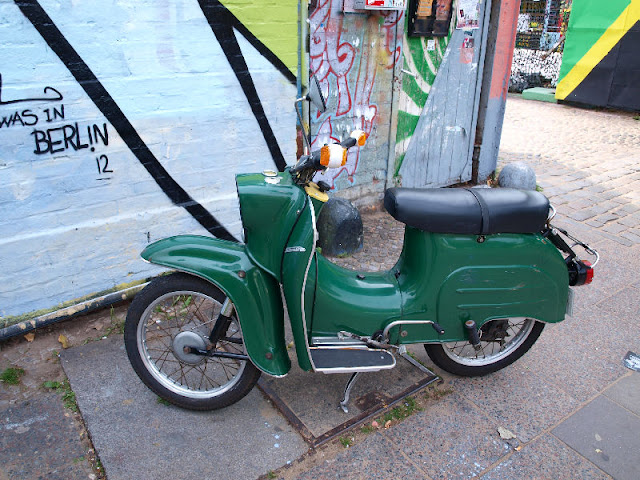 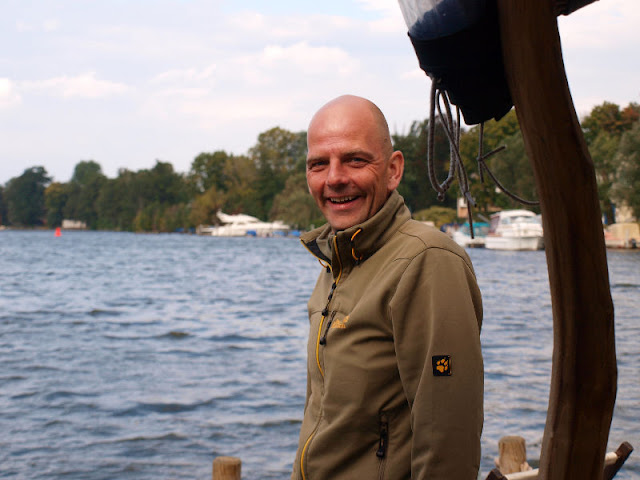 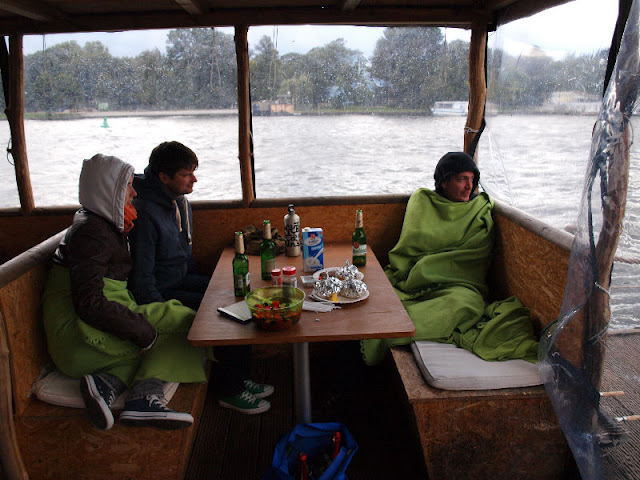 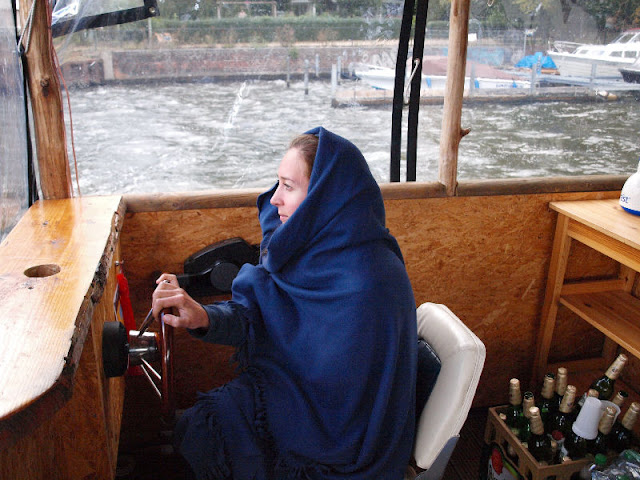 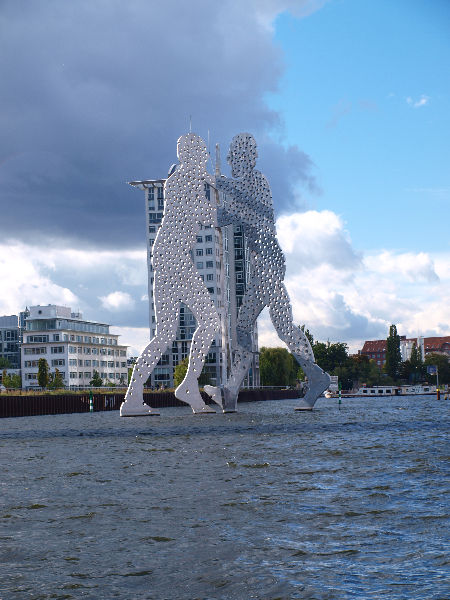 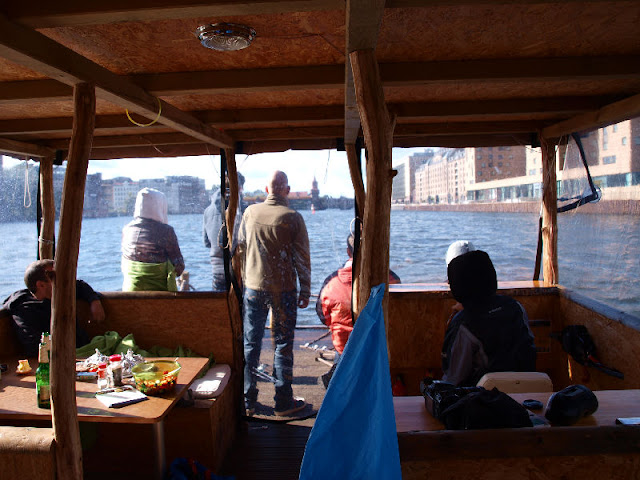 That odd building is a boutique hotel 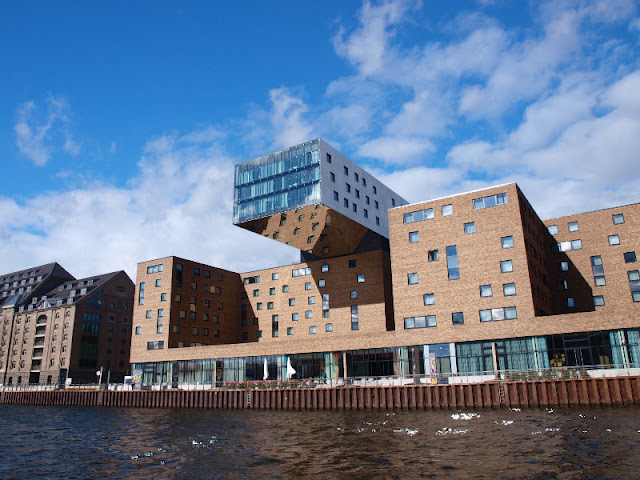 Oberbaum Bridge which once divided East and West Germany 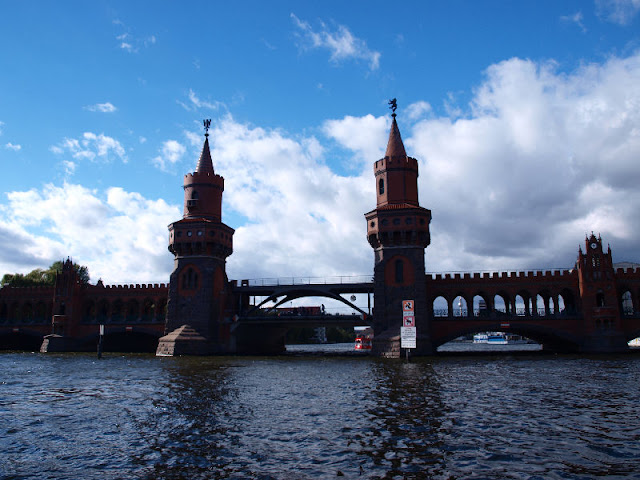 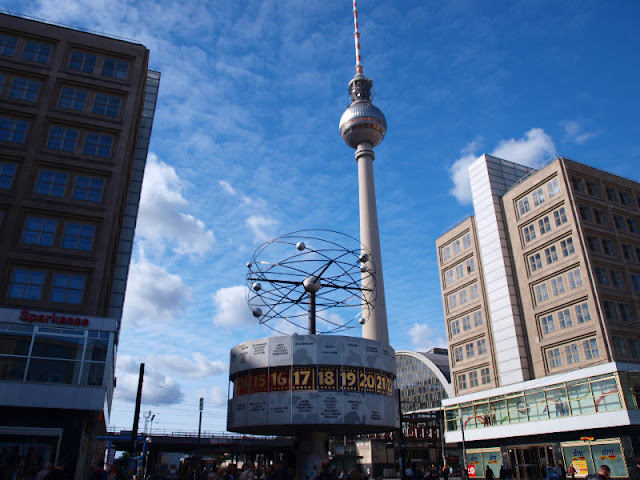 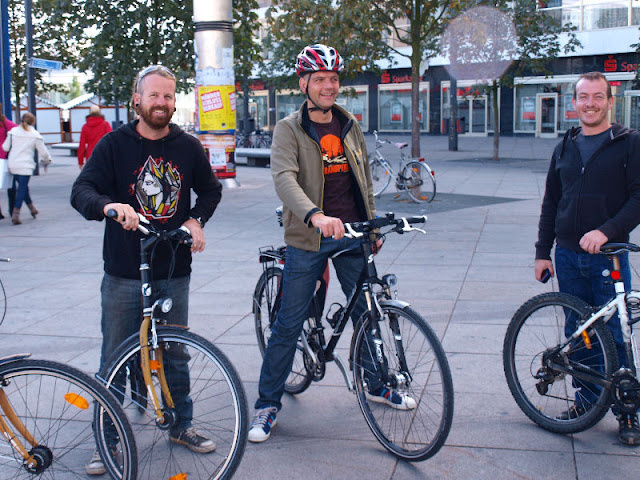 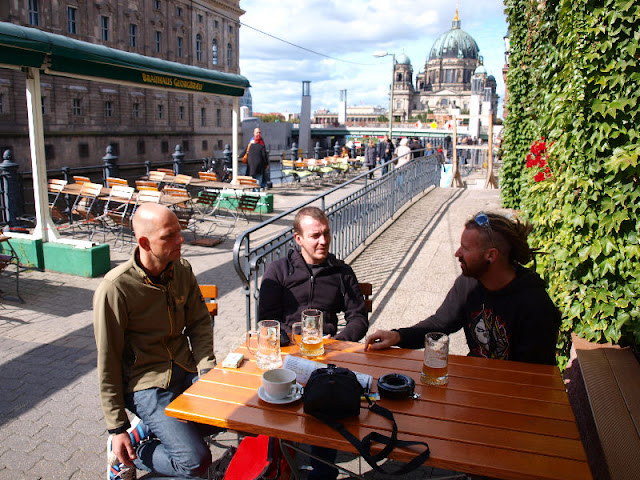 Sanne in front of Brandenburger Tor 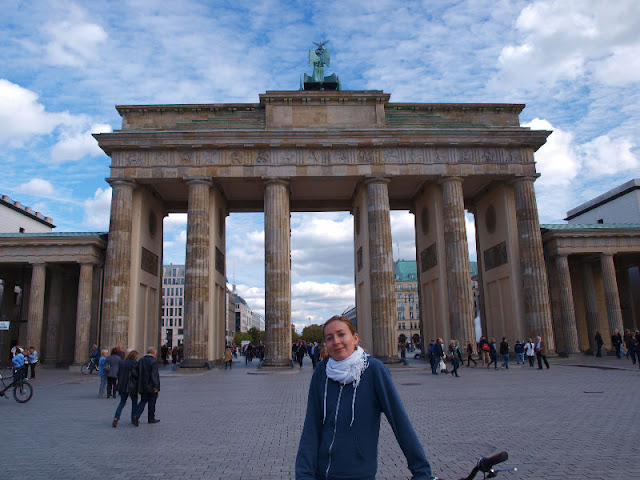 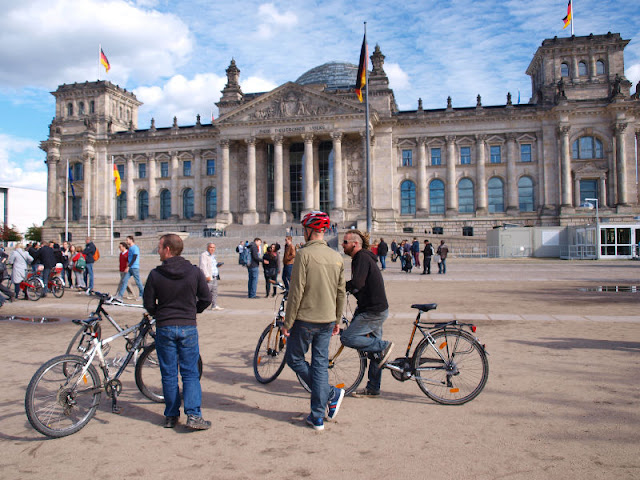 This is a memorial of the Holocaust 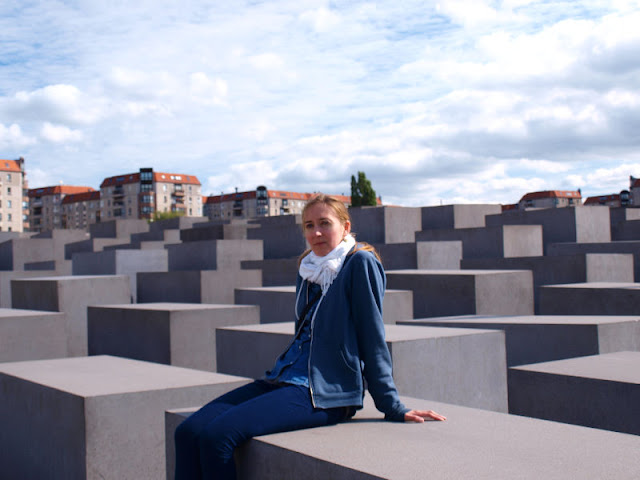 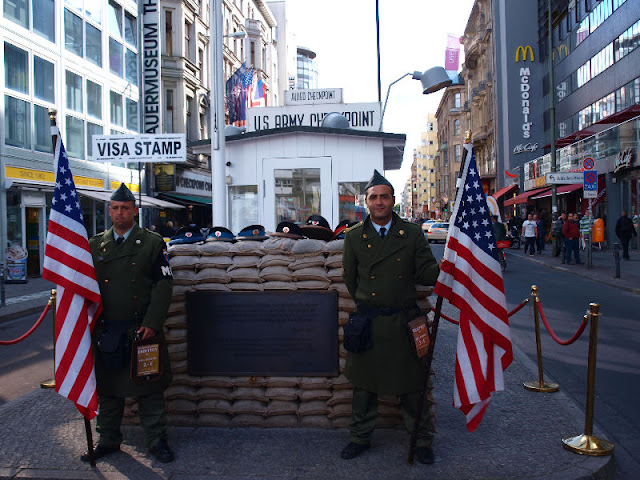 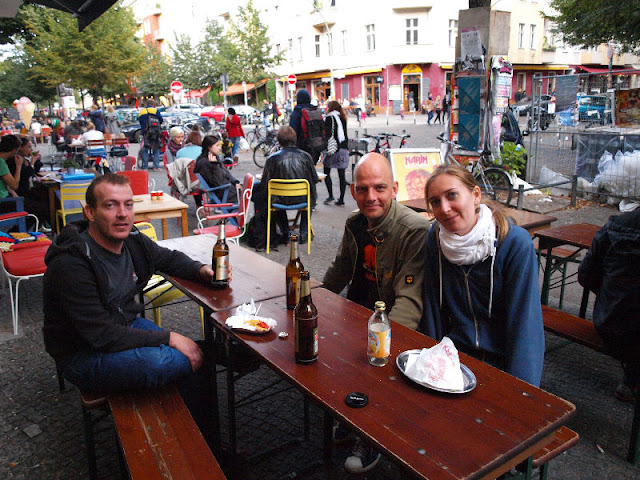 Our last night in Germany was spent couch surfing in
Hamburg with Stef in his motorhome - in a carpark. 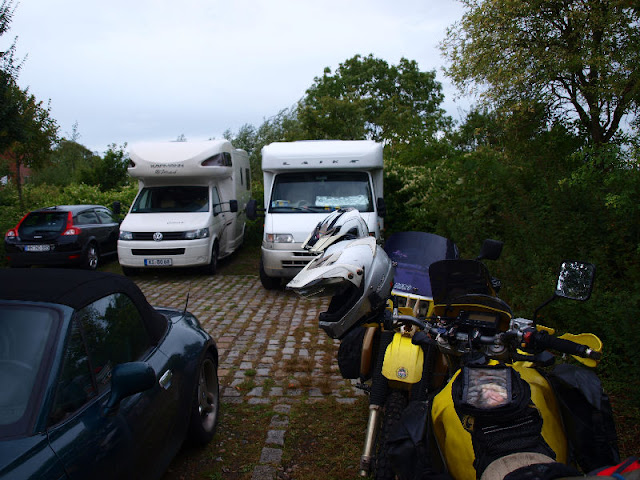