The Pursuit of Sunshine

And by pursuit I mean hunt!
After leaving La Plata heading north we seriously started to doubt if we hadn't arrived in South America a little too early. We did not see the sun nor blue skies for four whole days and I for one was starting to wonder if we would ever see it again. But on the fourth day, crossing into the province of Misiones in Northern Argentina, the sun finally managed to break through the clouds dousing our skin with some much needed Vitamin D.

To get to this point though we had to endure 1500 kms of boring, flat, barren scenery on Ruta 12 and 14. Apart from being incessantly dull, this part of Argentina, the province of Entre Rios, is also known for being littered with my favourite species aka The Corrupt Cop. We had read on a motorbike forum that many a motorbike traveller had been stopped and fined for various ludicrous things, such as not carrying a fire extinguisher, wearing headphones, and my favourite: not carrying a white sheet to cover you in the event of your own death! We had armed ourselves with some print outs of paragraphs from the law in Spanish that basically would serve to invalidate their arguments were we to be stopped. Apart from that we would just play the dumb tourist card with lots of "No entiendo"s which really would come very natural to us as most of the time we were pretty clueless anyway! The point at where everyone seemed to have experienced problems was very specific apparently: Ruta 14 Km no 341. So as we approached this police checkpoint we were bracing ourselves for a whole lotta fun. Imagine our relief then when we were casually waved past! They must have seen our cunning demeanor from miles away. In reality, the weather was shite so they most likely just wanted to get back inside for hot cup of mate.

Because of this really shitty weather I'm embarrassed to say we took only three photos in four days; one outside each hotel we stayed in. It really was that cold that I couldn't get myself to stop, remove my gloves and take a photo - it was all just too much effort! Besides as mentioned before, there really wasn't a whole lot out here. We did get some waves from a couple of Gauchos (cowboys) dressed up to the nines in colorful clothes, galloping along the side of the road on their horses looking every the bit of a traditional Argentinian cowboy.

We had hoped to camp on our way up but the rain and the lack of decent cover meant that we were forced to stay in hotels which was not cheap. Newsflash: Argentina is expensive. We had noticed that straight away upon arriving in Buenos Aires. Simply buying some food at the local supermercado set you back a great sum of money and accommodation was no different. Our first night in the town of Gualeguaychu (pronounce that when you've had a few to drink!) we paid 250 pesos which is roughly $45 for a room we would expect to pay $10 for in Asia. However every subsequent night we managed to pay a little less, while the room quality oddly improved at the same time. The cheapest we paid was 180 pesos which I whole-heartedly put down to Mark's negotiating skills. These "skills" were mainly a reflection of the before-mentioned cluelessnes of the Spanish language and trying to communicate with the hotel staff using a phrasebook. I was outside watching the bikes and I heard a lot of giggling coming from the reception area. Mark had somehow managed to get us a room (with breakfast included) with 100 pesos knocked off the price. How? By acting lost and bewildered!

Anyway, we finally made it to Puerto Iguazu and after a lot of riding around in circles (not the best signage around here) we found a little campsite down a dirt road which wasn't really open for business as the owners were re-developing the whole site but they very kindly let us stay there which was pretty cool as we were the only tourists there. The guys there were really nice to us and we hung out with them conversing with them in our Spanglish and I think if we had spent some more time there we would have eventually learnt Spanish! Really nice and chilled place and when it is all finished I think it will be a really cool place to stay. Check out their facebook page if you are coming to Puerto Iguazu. While we were here we organised a Brazilian visa for Mark at the consulate in town which was very easy and quick and from what we have heard much better than its Buenos Aires counterpart. Luckily being the holder of a European passport means that I don't need a visa for Brazil or Argentina, but because the Australian government chooses to charge these nations a lot of money to enter Australia, Australians then in return gets slugged the same amount of money for entering these countries. Fair enough really but a little expensive for us.

Of course while we were here we also went to check out this little waterfall that has everyone talking...but that's for the next blog. 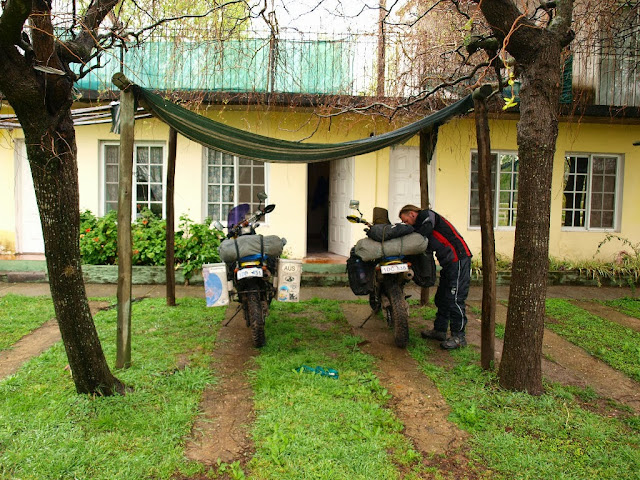 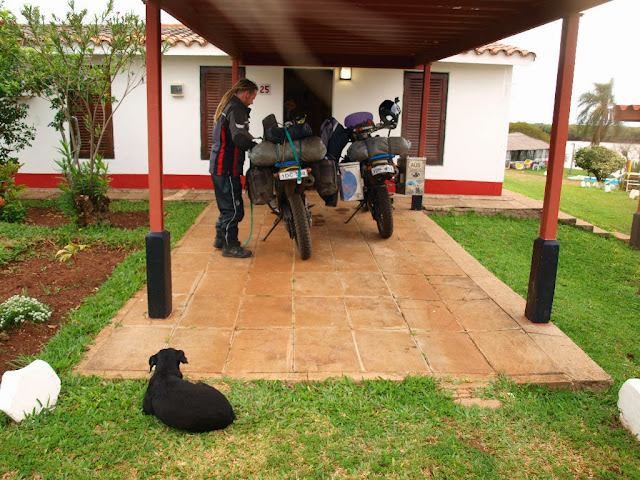 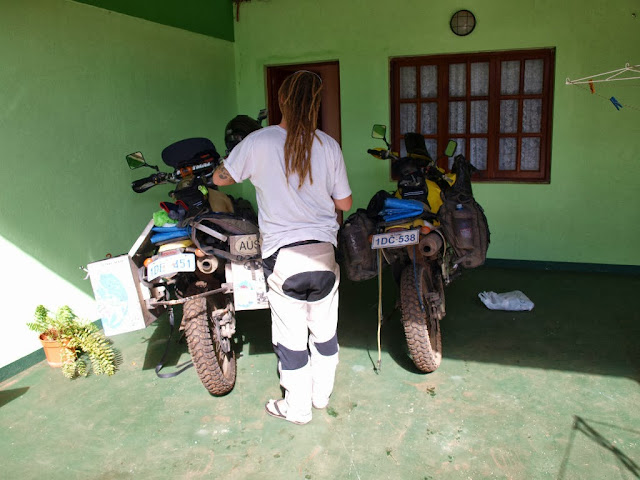 Our nice campsite in Puerto Iguazu 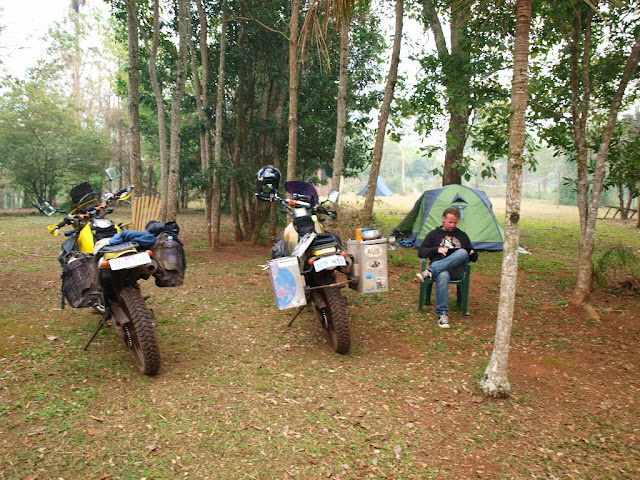 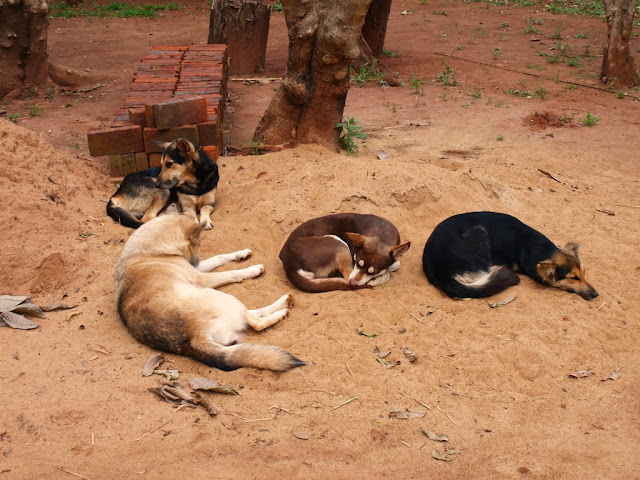 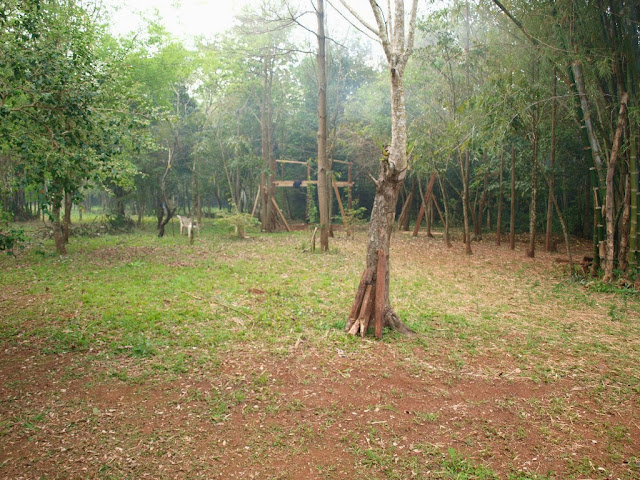 That's Paraguay on the other side of the river 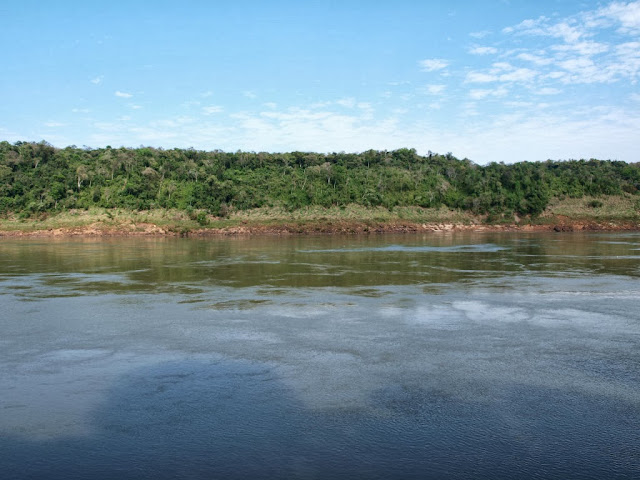 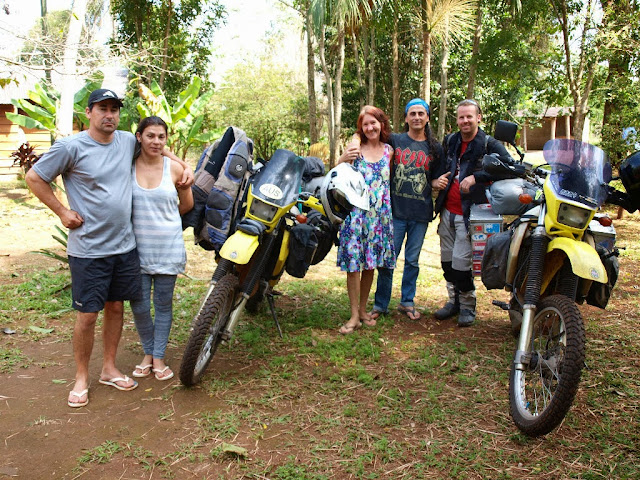