Iguazu Falls or Cataratas as the locals call them are shared between Argentina and Brazil although most of the falls are on the Argentina side. The power, size and sheer noise of the falls have to be experienced to be believed. It is actually a series of 275 waterfalls. The most impressive of them all is the Garganta del Diablo (Devil's Throat), a long and narrow chasm which half of the river's flow falls into. On the Argentinian side a footbridge takes you out across the river and up to the Devil's Throat so you actually stand right above where the river falls over the falls. How can I best explain it? It's not a trickle, let me tell you that much! There's a LOT of water! Suffice to say, every waterfall we'll visit after this will dwindle in comparison.

We had been told that to truly appreciate the falls we should go to both the Argentinian and the Brazilian side of the falls, which we did. Which side is best? It's hard to say. I think the best overview is perhaps from the Brazilian side but I personally feel the Argentinian side is more impressive because it lets you get up so close to the falls and there are a lot more walks and viewpoints.
We visited the Brazilian side some days after the Argentinian and in the leading up to it there had been a lot of rain which meant the falls were even fuller than full. At the carpark when we arrived we were approached by a woman asking if we wanted to buy her used rain poncho for 5 Riel. Nah, we'll be fine, who needs a poncho?! On reflection we probably should have agreed to pay the $2 as when we approached the falls the mist could be felt hundreds of metres away which meant that when we actually came up close to the falls, it meant for a complete soaking. It was like we had taken a shower with our clothes on basically. Drenched and cold we found ourselves a sunny spot to lie down and dry up, only stirring when he odd coati (a type of racoon) would try to steal our stuff. These coatis roam on both of the sides and they are very cheeky. Basically like the monkeys of Asia. If you take your eyes off your food for just a second, well you've just provided lunch for a hungry coati.

While in Foz we also went to visit Itaipu Dam, the largest operating hydroelectric facility in the world in terms of annual energy generation. It is a binational undertaking between Brazil and Paraguay and is right on the border of the two on the Parana River, just down from Iguazu Falls. It was interesting to see such a massive facility although one can not visit a place like this without considering the social and environmental impacts an installation like this has. As part of the tour you are being made to watch a movie about the dam from conception till finish. In the movie the narrator boasts about the dam's ability to generate large amounts of energy supplying both Brazil and Paraguay. But then the narrator goes on to claim that the dam had absolutely no detrimental effect on the environment. I guess they forgot about the 10,000 families living beside the river that had to be displaced, indigenous villages and 700 sq km of forest destroyed and the world's largest waterfall (by volume) big enough to rival the Iguazu, the Guaira Falls were drowned by the new reservoir created. The Brazilian government liquidated the Guaira Falls National Park and dynamited the submerged rock face where the falls had been. No detrimental effect you say?

Foz Do Iguacu was also to be our first encounter with a member of Brazil Riders. Our Brazilian friends in London, Carlos and Ellie had put us in contact with some members of the group and all of a sudden we had offers from several riders to come and stay in their house. In Foz we met Sampaio who very kindly took us in and gave us our own quarter out the back, basically a mini house with our own bathroom, kitchen and everything. He told us that we could stay as long as we wanted which because of the weather we kind of took him up upon! The damn rain had caught up with us again, just as we thought we had left it behind in Argentina. Not only was it wet but cold too, the nights were down to 5 degrees. So luckily we had a proper roof instead of the tent. Only challenge, Sampaio and his wife didn't speak a word of English and we sure as hell didn't speak a word of Portugese! Enter: Google Translate! The most wonderful invention known to man. During the 4 days we were there it got used intensively. It was helpful most of the time although sometimes it failed to translate correctly which lead to for example 'sesame seeds' being translated into 'hedgehog'! It made for many good laughs. 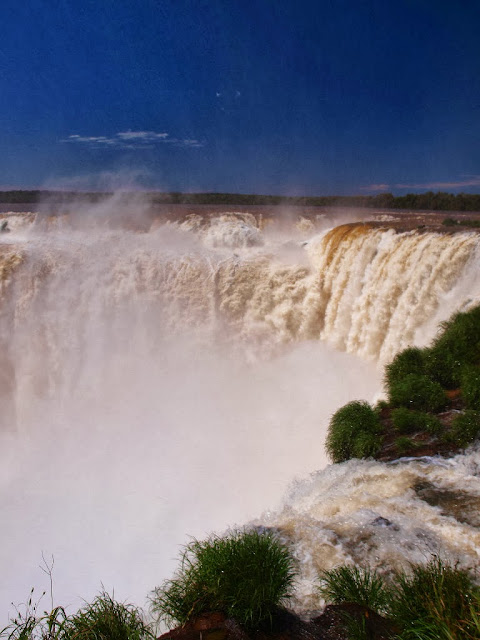 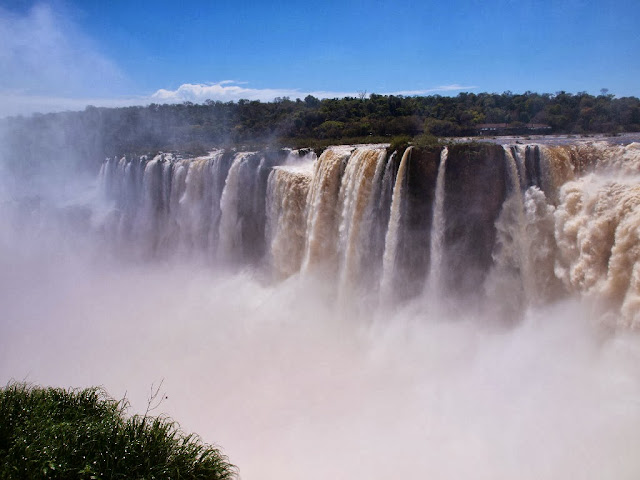 Where the river drops down 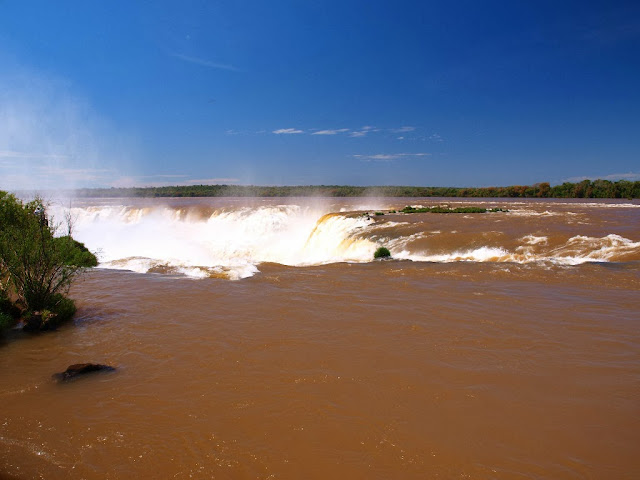 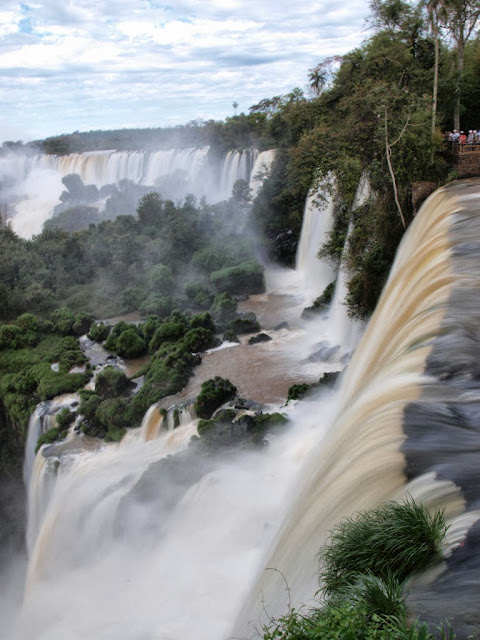 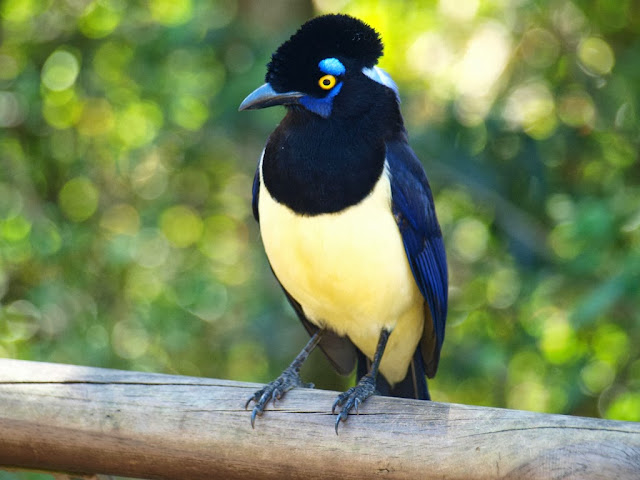 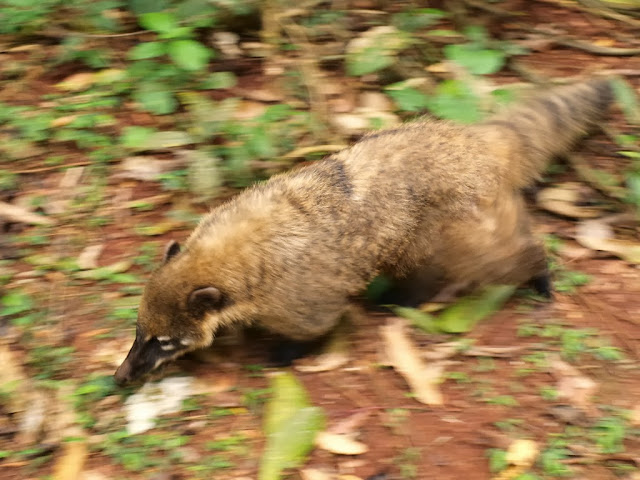 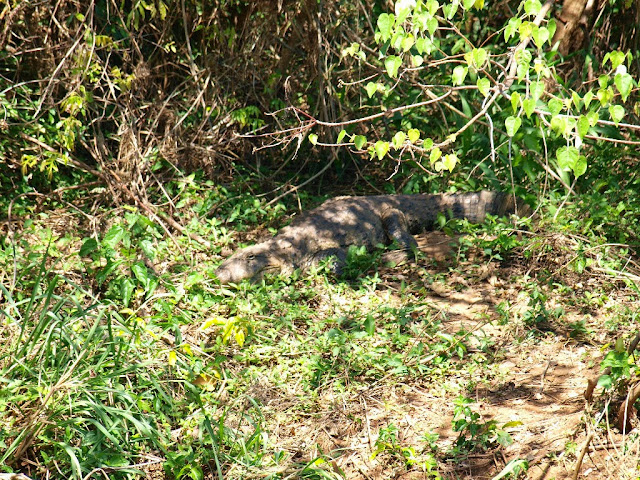 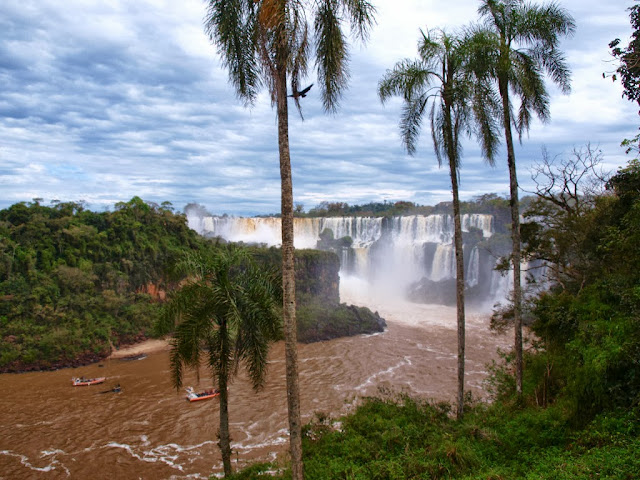 I needed a shower anyway 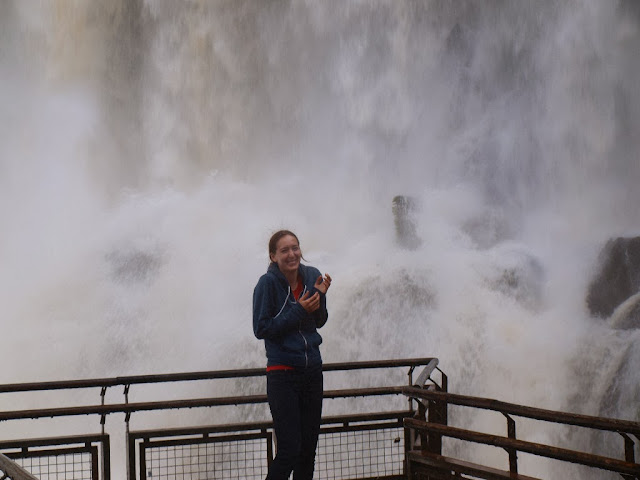 Someone got a little too excited upon seeing the falls 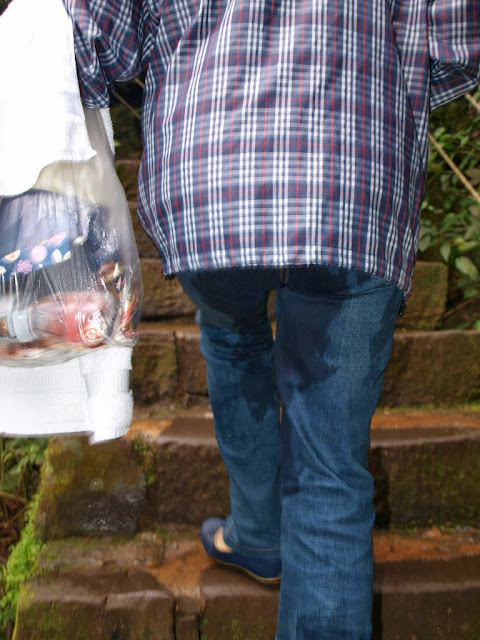 The rumour is true: Brazilian women are veeerrry beautiful... 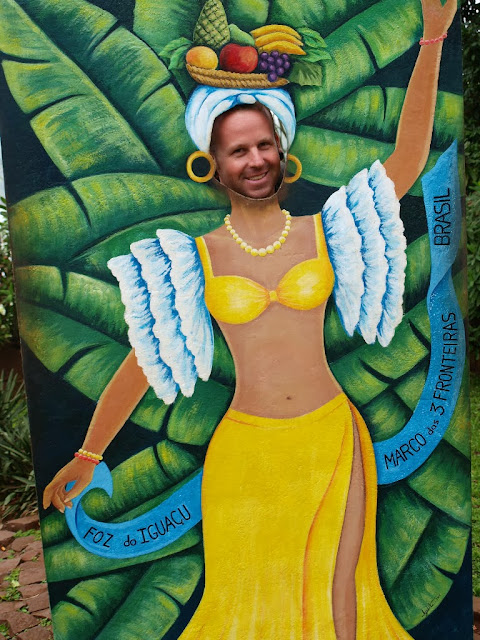 Now for the Brazilian side: 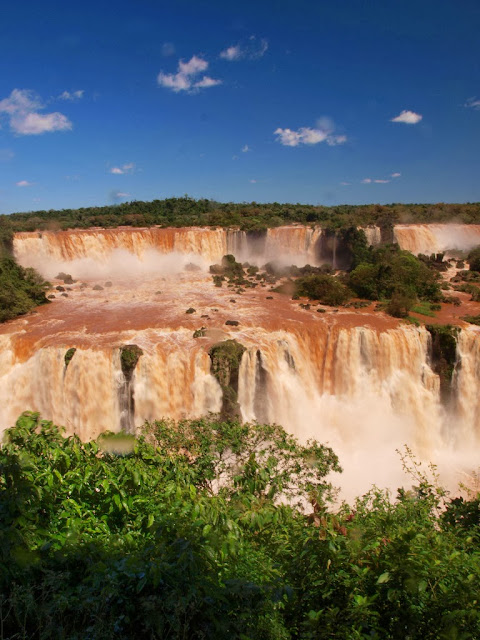 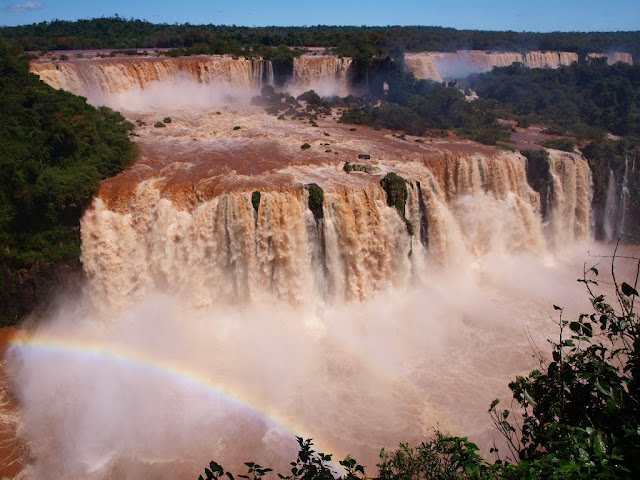 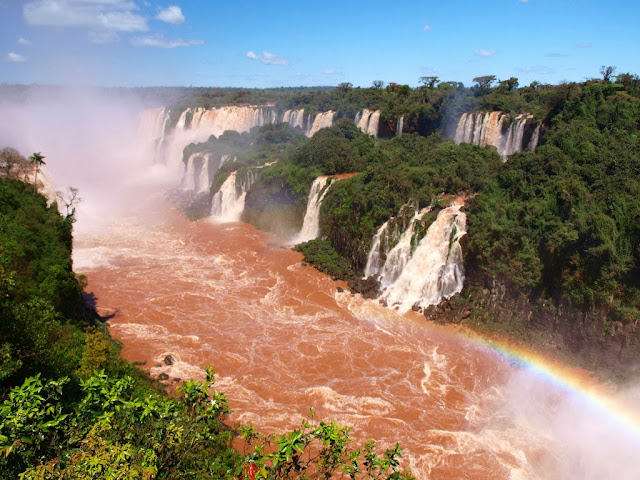 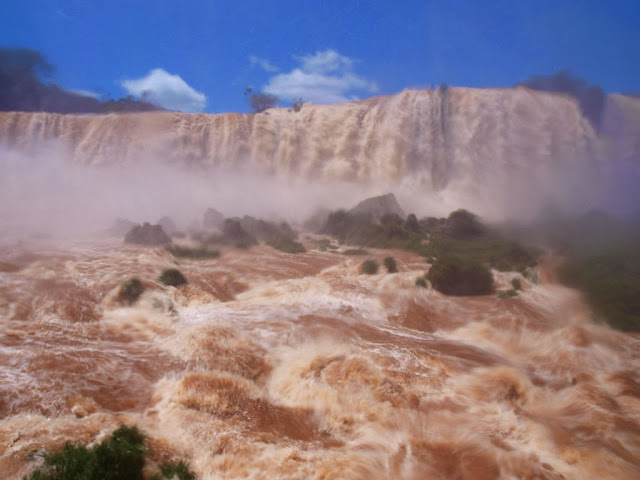 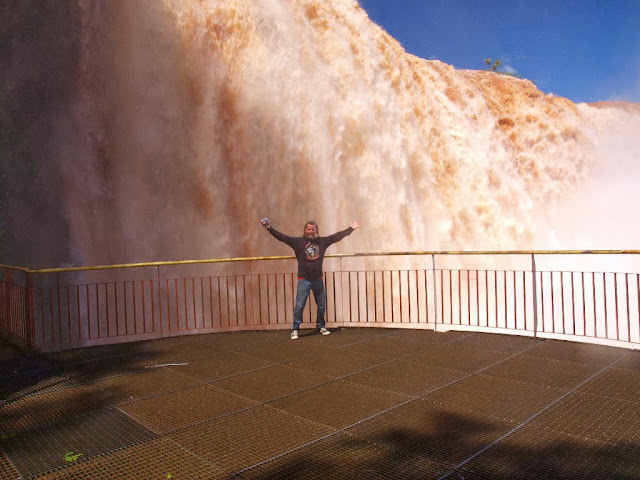 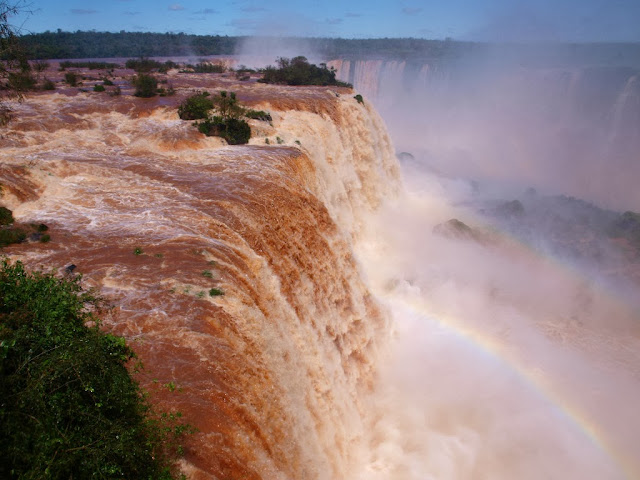 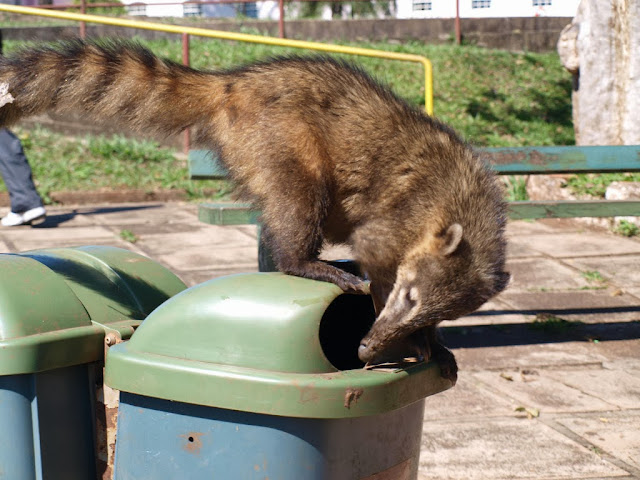 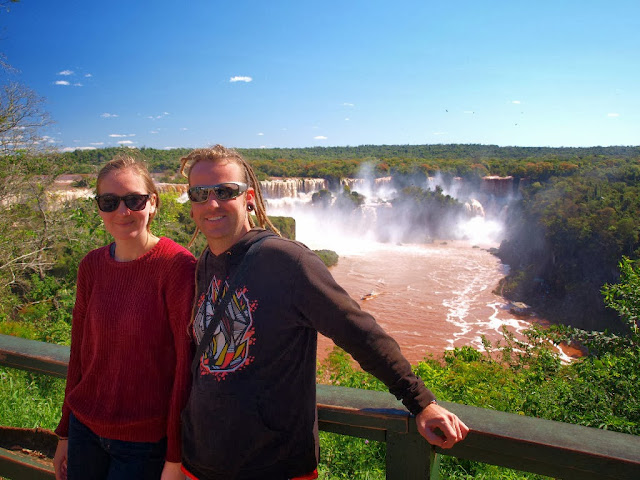 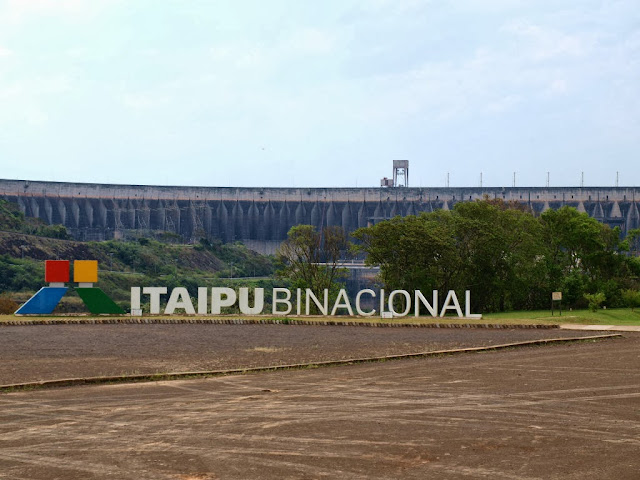 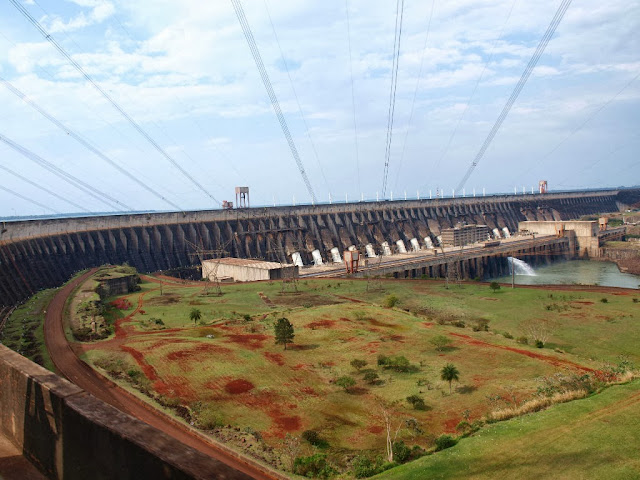 Mark with Sampaio, Rosana and Luara outside their home in Foz 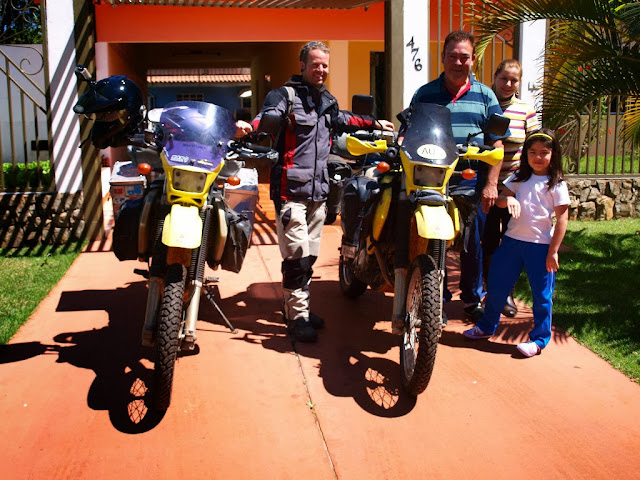