While in Florianopolis we met a young guy named Fernando, he had seen our bikes on the street and came looking for us. We were not too hard to find as we were sitting just across the road from the bikes enjoying our last Acai. He asked us about our route and then gave us a few tips on places to ride when we left from here. It was one of the best tips we could have been given! He suggested we head inland via a few back roads and ride the Serra Corvo Branco.

We left the city behind and instead of heading down the coast via the BR 101 we headed inland looking for dirt roads which we have not ridden enough of while in Brasil. We were rewarded for this riding through some beautiful countryside that at times reminded me of home. We weaved back and forth through the countryside on roads that were busier than I had expected. We did come unstuck a few times with our directions due to poor signage and our not so detailed map but it was well worth it.

Late in the day we finally had the Serra Corvo Branco in our sights and boy was it worth it. This has to be the steepest road we have been on in a long time with the tightest switchbacks leading us over the mountain pass. The view back over the valley was stunning. We were both looking forward to the next few days riding which would continue on through the mountains until we dropped back down to sea level.
Our stopover was in the small town of Uribici, and it just so happened that there was a Brazil Rider who lived in town who was going to host us in his guesthouse. When we got there however his guesthouse was full due to a long weekend. Marcus then lead us back out to a local campground and got us set up and even kindly paid for us since he was unable to host us and then invited us back to his place for dinner. Marcus, your risotto was delicious! We were not the only bikers in the campground, it was full of other bikers who were making the most of their long weekend.

The next day we had a full day of dirt roads ahead of us including a ride on another pass called Serra do Rio Rastro. Unfortunately the weather was not so kind and the heavens opened up on us so by the time we reached the pass it was engulfed in an enormous cloud of rain so we decided to miss riding the wet slippery roads and head back to our favoured dirt roads. We found ourselves riding in and out of the clouds all day through spectacular countryside which had me dreaming away of setting up home there. I thought about having a farm and maybe start my own off road riding school, then BANG, I hit another huge rock on the road which snapped me out of my dream state and made me realise I should be concentrating more on the road. It had to be one of the roughest roads almost of the entire trip. That afternoon we came by a little town which was one the creepiest places we have come across in Brasil. On the edge of town was a stunning little river which we were thinking of camping by until we headed into town to see what was about.
It was like a scene from an American horror movie, it was an all but abandoned town with one inbred looking person staring at us as we rode past. Others we could see were hiding behind their windows peeking through the curtains and conjuring up ideas what they would do to us. With these thoughts in our head we hightailed it out of there with the local rabid dogs chasing us out of town.

Just ten kilometres down the road we couldn’t believe the contrast off what we had just seen and where we now found ourselves. We managed to find a farm that had a fantastic campground and it was cheap. Score! It was also full of bikers, this time the bikers were all members of a club called the XT660 club and they had one of their meetings on that weekend which was more like a party which we were invited along to. It was great to be around more bikers. The camaraderie of bikers in Brasil is like no other I have witnessed anywhere else in the world.  It doesn’t matter what you ride as long as you are on two wheels.  Australians take note, this is lost on many of you these days. We enjoyed the company of the fellow riders and also many beers that came along with it. It was freezing cold outside and my way of not thinking about it was to get drunk and go pass out in the tent. Luckily the next morning brought with it beautiful clear blue skies. It was perfect for our last day in the mountains and our visit to the impressive Fortaleza gorge. With impressive views back towards the coast and rolling mountains of the interior of the country, little did we know at that time, that this would be the last beautiful place we would see in Brasil.

On our way to the coast we just happened to pull up on the side of the road for a quick break where a bunch of BMW riders just entered back onto the sketchy road. Sanne as usual rolled her eyes when checking out the guys on their flash big bikes dressed in BMW gear with all the latest gadgets from Touratech decked out on their bikes. As they rode off I said to Sanne: “You can have them, and how funny would it be to pass and roost the guys on our little 400’s?” With that, nothing more needed to be said and Sanne was off, riding like she was possessed. She had a point to prove and she was going to do it no matter how bad the condition of the road was. As I followed along behind I started to realise what I had said was probably not a good idea as I watched  Sanne’s bike stepping out sideways as she bumped up and down along the rough road until she caught up and passed the BMW guys. A few kilometres down the road we pulled over and I laughed as I saw this huge big grin on Sannes face, with a huge sense of achievement all over it. Sanne and her little Suzuki : 1. BMW: 0.

We had one more stop to make and that was down on the coast with our last host, Humberto and his girlfriend Deborah. They are not Brazil riders but are part of another club called VMAS but are friends of some Brazil riders we had stayed with. They took us in along with their five menacing Dobermans. I really needed a day to check over the bikes after the past three days on some of the worst roads we have been on, no complaints as it was great fun but the bikes always need a once over after those sorts of conditions. I am glad I did, I found one snapped mounting on my pannier racks, one cracked mounting on my rear subframe, one snapped spoke and two more that needed replacing. After almost 80,000km’s on the road the bikes are starting to feel the pain of long distance travel. With the help of Berto and his friend we got the bikes sorted out. The local welder on the other hand butchered his way around my subframe and after a few words and one welder storming out on me when I questioned what he was doing, we did somehow get it sorted. I just don’t know how long it will last.
Berto and Deborah were great hosts, just like almost every other host we have had the chance to stay with in Brasil. The following day we left and I didn’t realise it at the time why I was feeling so off that day. Now thinking back over it, it would be the last time we would be hosted by such fantastic people. We had only one night left in Brasil and we found ourselves bush camping for our last night. With time to reflect on what the past two months had meant to us.

To everyone we met, were hosted by and talked to, we will remember you always. When I think of all the great times we have had in Brasil and the wonderful openness of the strangers we have met and the new friends we have left behind, your kindness means more to us than you will ever know and we hope through your generosity that we will grow from this and try to do the same in the future, when we eventually return to Australia our home will also be your home. Mi casa es su casa.

The back country on our way to Uribici 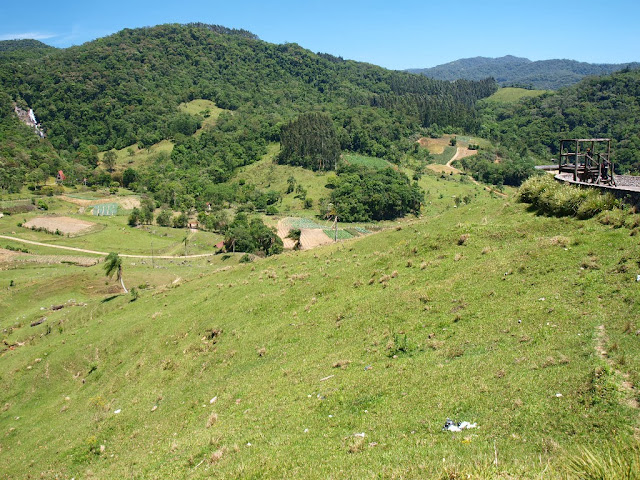 Quick stop off for a lunch break 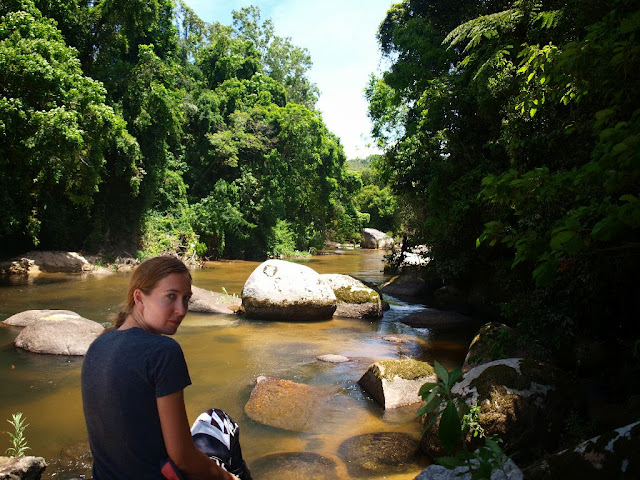 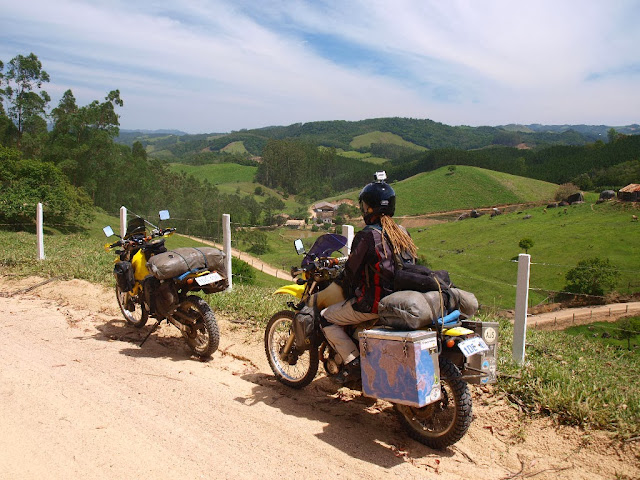 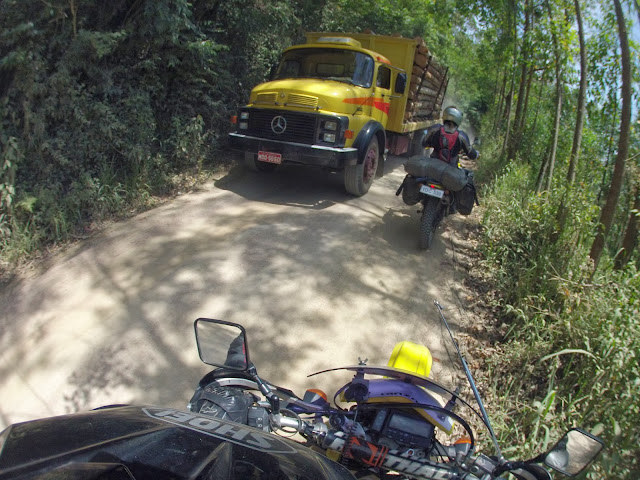 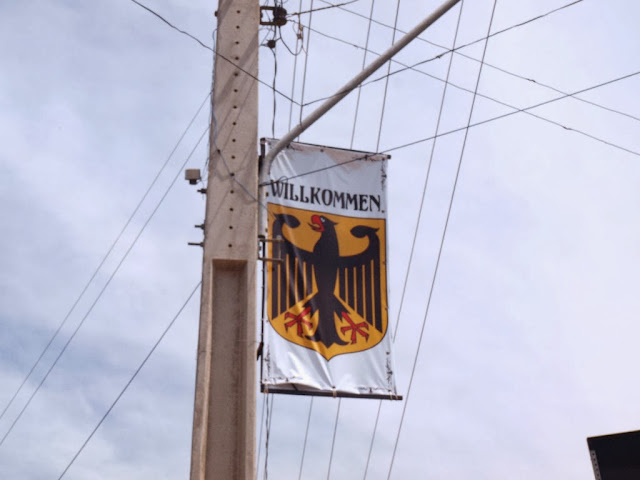 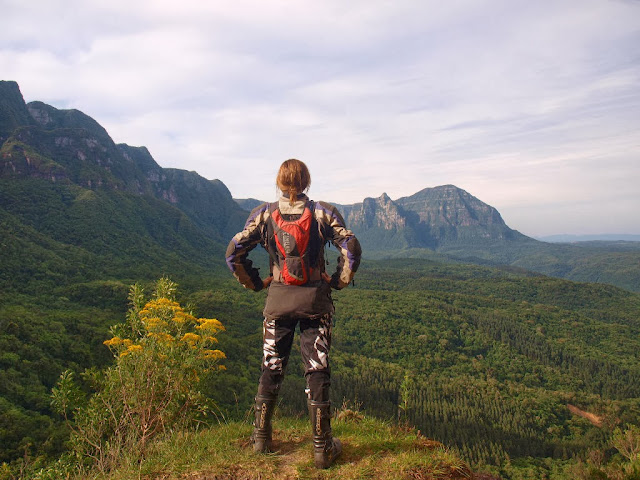 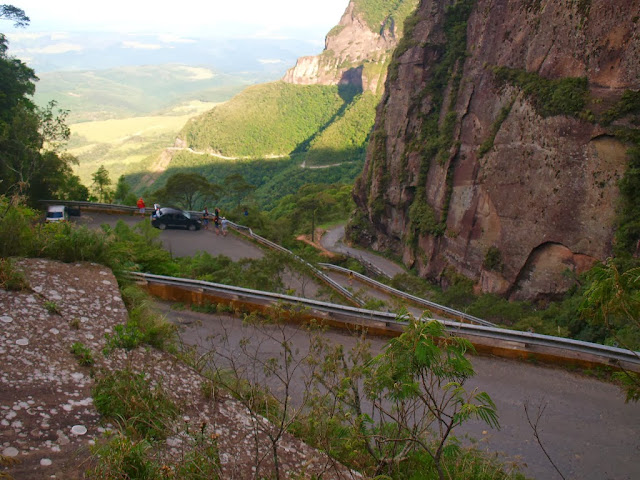 Still attracting a crowd, maybe it was just the view and not me? 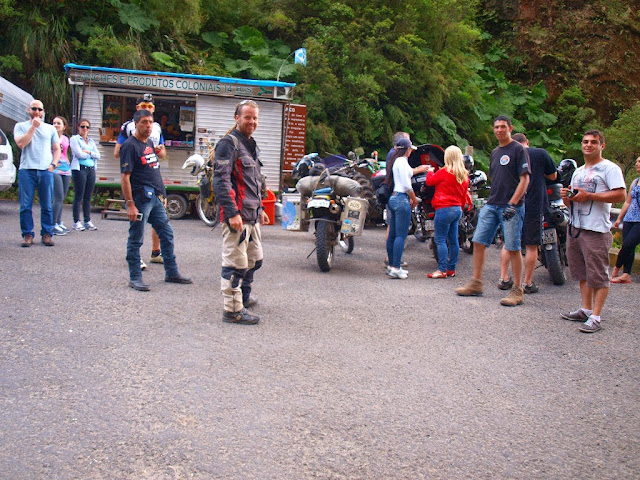 A complete white out over Serra do Rio do Rastro 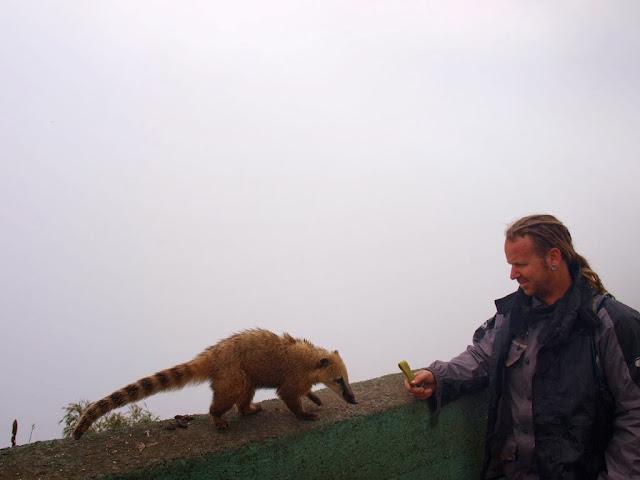 We both love being off the tarmac, especially with the spectacular scenery that surrounded us. 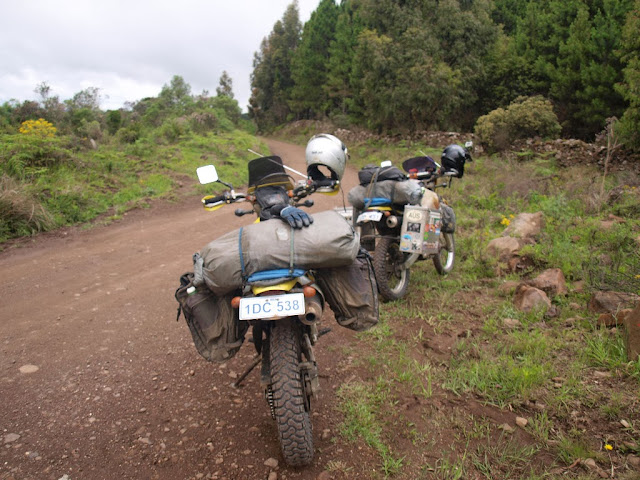 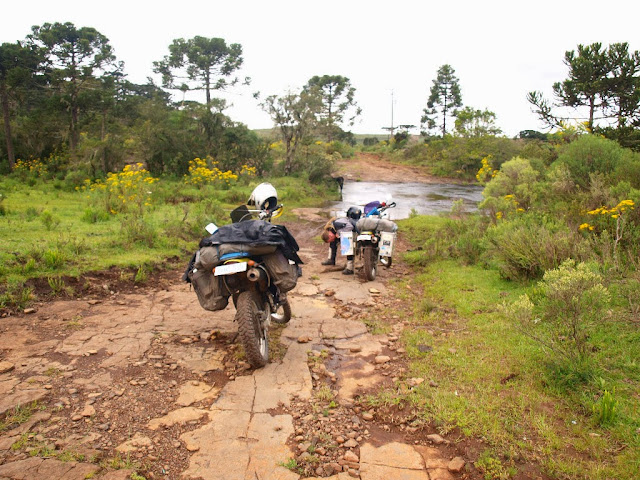 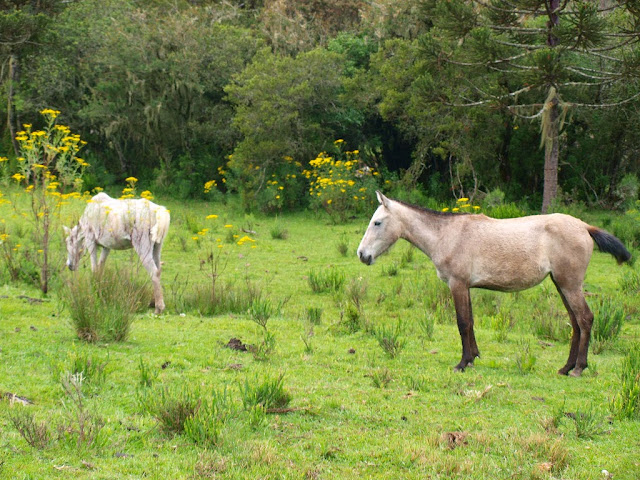 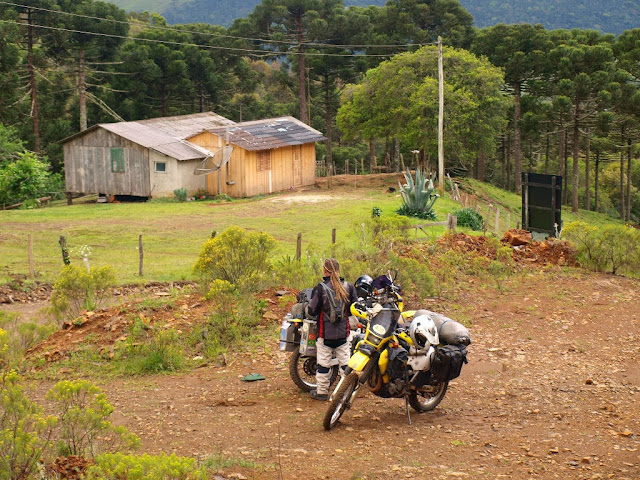 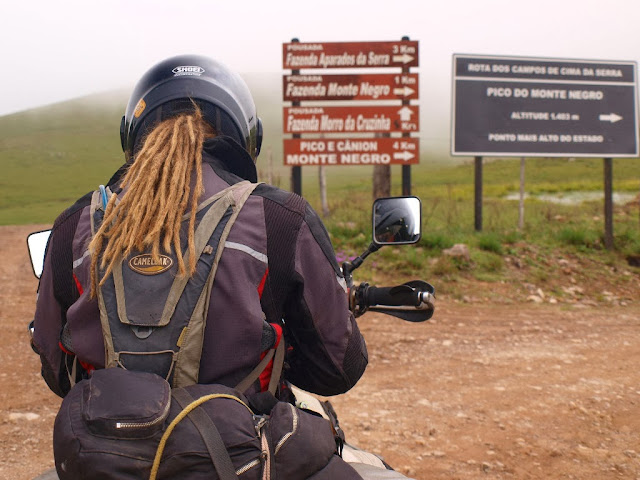 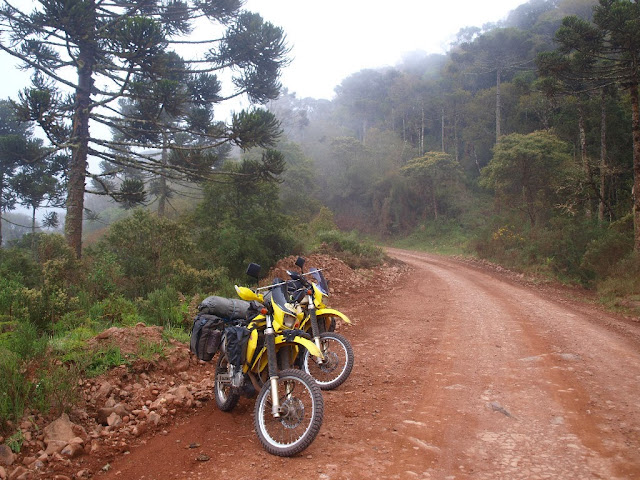 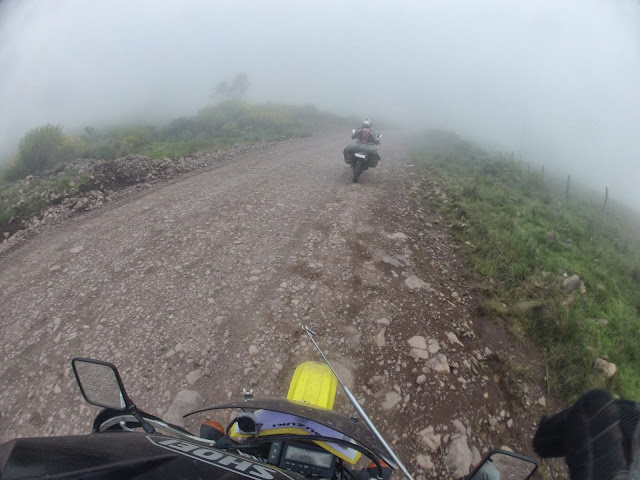 Our great campspot,very tranquil after the ghost town we had just left behind 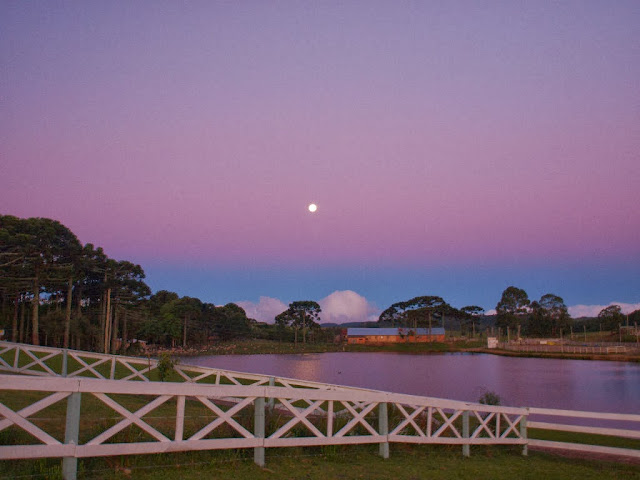 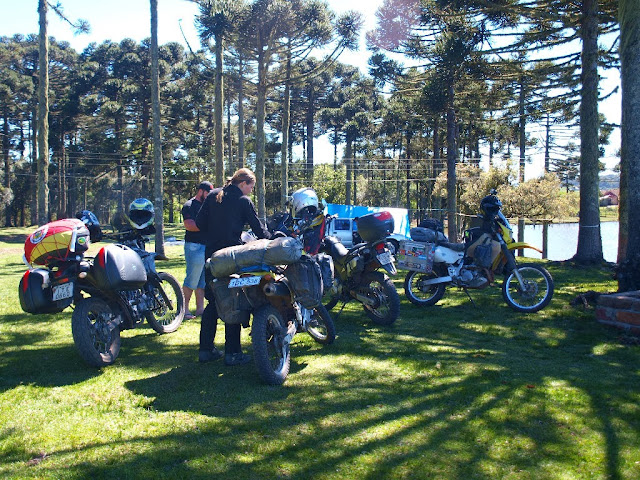 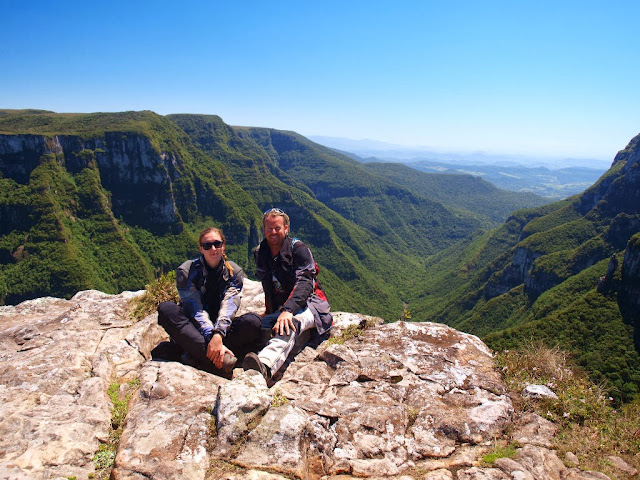 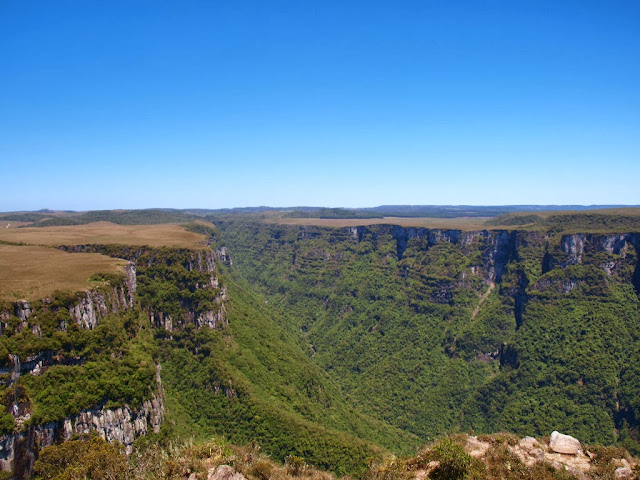 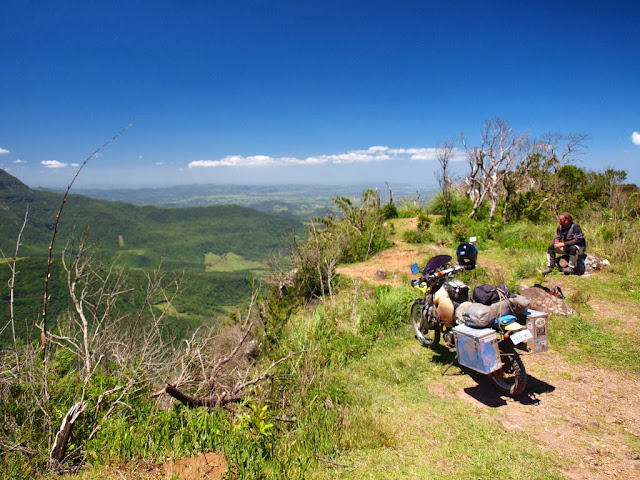 Our last hosts in Brasil, Debora and Berto