We made our way to Recreio dos Bandeirantes, the suburb of Rio where we were going to stay with our Couchsurfing host, Nicolas. We found it without any problems and decided to hang out on the beach while we were waiting for Nicolas to come home from work.
That first night Nicolas took us to a reggae gig in the neighborhood of Lapa. It was like a Dutch oven in there, but what is a reggae gig without mary jane right? Reggae is usually not my choice of music (especially when it's in Portuguese, a language of which I understand nada) but because we were in such good company with Nicolas and his friends it made for an enjoyable night nevertheless.

We spent the weekend with Nicolas and he took us to the local beaches around that area which were great but there was quite a big a swell when we were there and it made swimming quite an ordeal with strong rips present. Still it was nice to be in the water again and the beaches were beautiful. Mark's sole attention was on the scantily clad ladies on the beach. I now understand why the Brazilian was invented here. 99.9% of women here wear a g-string bikini. Apparently being topless is not allowed in Rio so everyone resorts to flashing their bum cheeks instead. Including the ones who really shouldn't have.

Bumcheeks aside, Nicolas introduced us to the delicacy that is: Acai icecream.  We had tasted Acai juice before and weren't impressed but the icecream version is much better. Acai is a berry from the Amazon and is one of those fruits that are being touted as a "Superfood" because it's super high in energy and antioxidants. We had it with granola on top and the very first bite...ahh we weren't too sure but then the flavour just grows and grows on you until you're like: Goddamn this is good! From that moment on we had one every day while we were in Rio.

After the weekend we left the bikes parked safely at Nicolas' condo and caught a bus into Ipanema. Here we had booked ourselves into a hostel for a few nights so we could be closer to all the attractions. This was to be only the third time on this entire trip we had stayed in a hostel as we try to avoid those places like the plague. On top of that Mark had never slept in a dorm room before so it was a bit of a change of scenery for us both. Like the grandma and grandpa we are we had even bought earplugs especially for this occasion. But...we needn't have worried. People here were actually really nice and definitely not your stereotypical backpacker douchebag. We even managed to make some friends there. It was obvious though that the travelers here are very different to overlanders. Not that that is a bad thing, but it was just very funny to see people's reactions when we told them about our trip. They clearly hadn't expected that! One sweet Korean girl even exclaimed: "Wow, you are REAL travelers!"

The waves at Ipanema were big and the water too treacherous for swimming unfortunately, Copacabana was the same with the exception of the southernmost corner which was swimable so we hired a paddleboard for an hour as neither of us had ever tried that before. Verdict: it's frickin' hard! It didn't help of course that the ocean wasn't that calm. Suffice to say, we both took many comic tumbles off the board, trying to get our balance and my ever-deteriorating dead toenail (which has been with me since some lardarse stepped on my toe at the Erzberg after party in April) almost managed to crack completely off but the sly f*cker is still hanging on for dear life so I have to resort to covering it with bandaids as to not put people off their food. It's gross. Anyway...

After the beach we caught the cable car to Pao de Acucar or Sugarloaf Mountain, the iconic peak which rises from the waters of Guanabara Bay in Rio. From the top you can see all over Rio; you see Christ the Redeemer statue straight across on another mountain, you see Favelas spread out on the mountainsides, the bustling city centre and to the east you see long, curvy Copacabana beach. We had been told it was the best view in Rio and I agree. Unfortunately it wasn't the clearest of days but we are slowly getting used to the fact that the weather pattern in Latin America is one of the strangest we have ever encountered. The weather is so up and down and the forecasts so wrong most of the time that we don't even check them anymore.
We stayed up on Sugarloaf until the sun went down and city lights below lit up all while the cold wind was blowing and giving us goosebumps (we were 396 m high).

The next day we paid a visit to Jesus himself. Christ the Redeemer or Cristo Redentor in Portuguese is not just a "Pylon" to quote Karl Pilkington. It is considered the biggest Art Deco statue in the world standing 30 m tall and arms stretched 28 m wide. The statue has become an icon for Rio de Janeiro and Brazil so of course we couldn't leave Rio without seeing it up close. As with Sugarloaf the sky was pretty hazy so we didn't get the best view over Rio but it was still enjoyable.

On our last night in Rio we went to a local samba school to watch them practice for the Rio Carnival in February. There a many schools but the one we went to, Vila Isabel, won the parade last year. A bunch of us from the hostel went and it was a really fun night with lots of music and samba dancing. The schools start practicing about 6 months before the Carnival in huge square compounds which are usually in bad neighborhoods and most if not all of the people in the school are from Favelas. I loved it. The drumming was super fast and loud and the dancers the same. Those girls can shake their asses! Just ask all the boys as they all casually moved to where the girls were dancing. There were guys dancing too though...one particular specimen was...shall we say...screaming homosexual. I mean, this guy was 1,000 times more feminine than all the girls together. He was an incredibly good dancer though and very entertaining to watch. Pezao, I think this guy kisses dudes for sure!

There is so much more to Rio than what we saw but it surprised me that it was such a pleasant city to be in and also that it felt pretty safe. It is definitely one of the most stunning big cities I have ever been to. And who knows, maybe one day we'll return...


A little monkey outside Nicolas' home - I gave it my banana 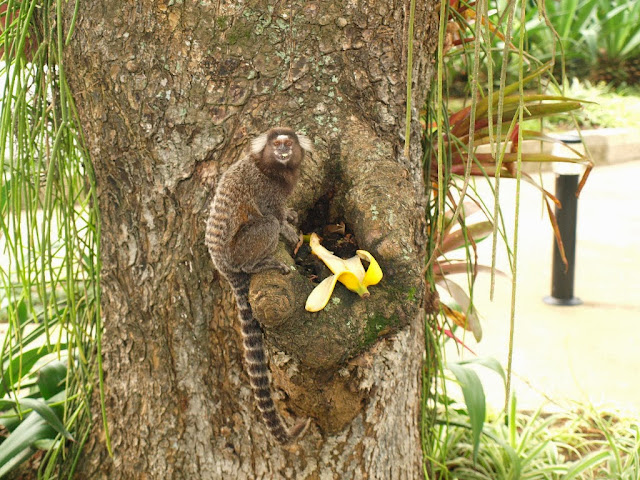 Mark, Nicolas and me at the beach close to his home 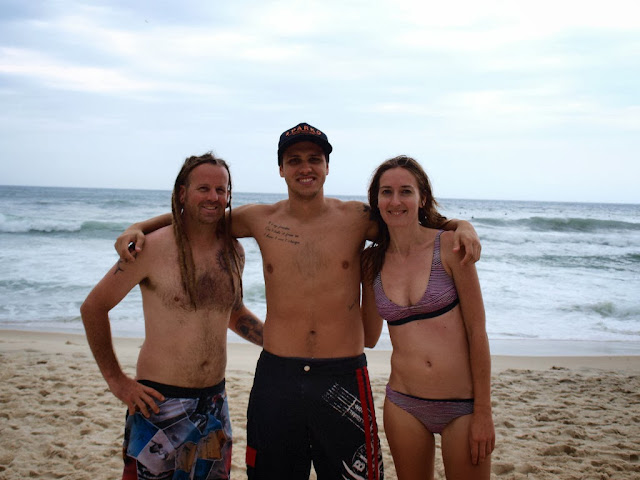 One of the most delicious foods of Brazil: Acai. Yum! 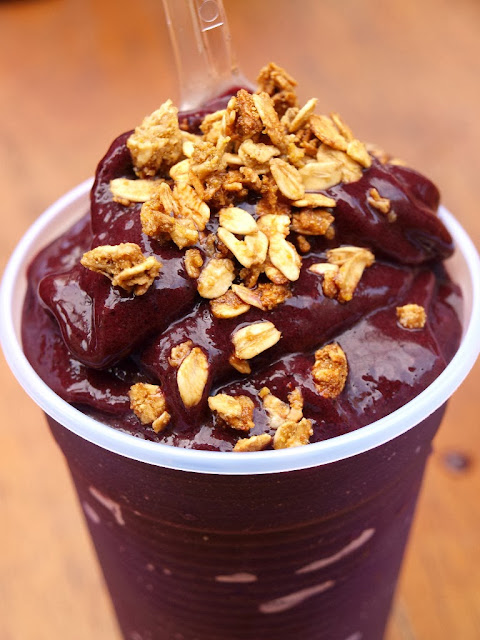 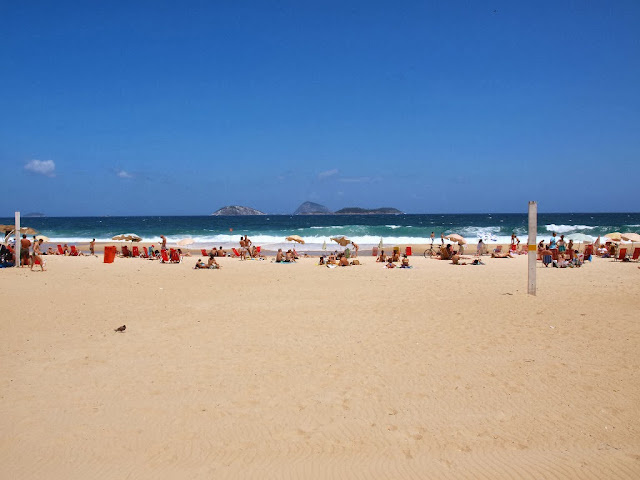 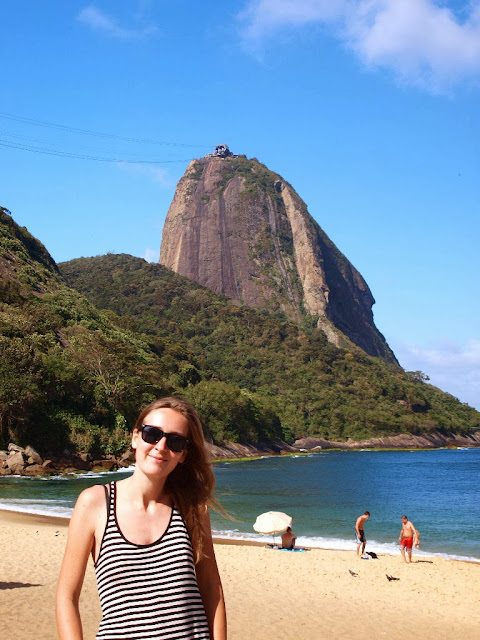 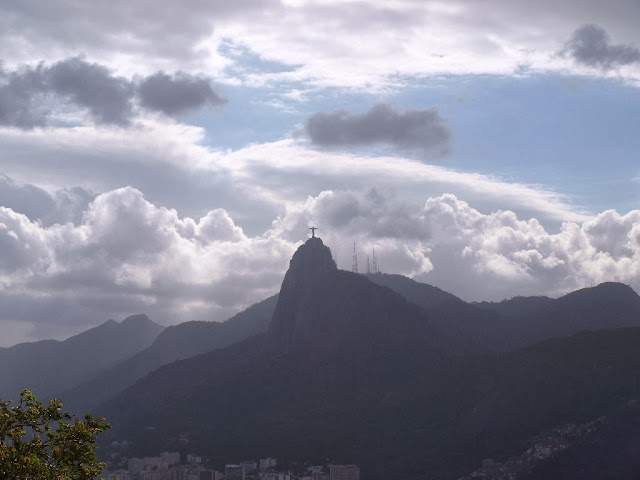 A baby monkey clinging to its mother's back 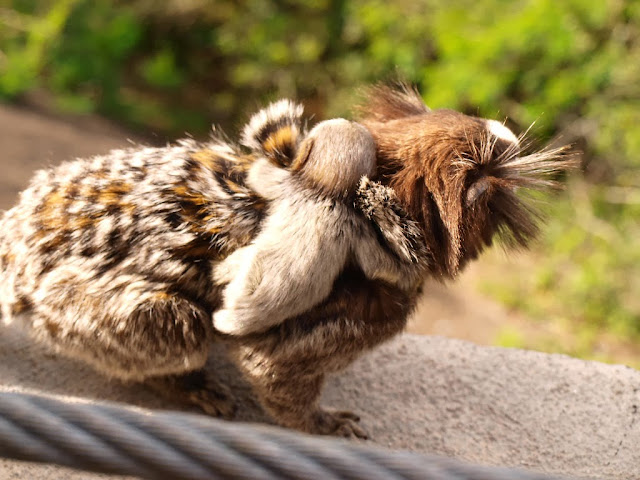 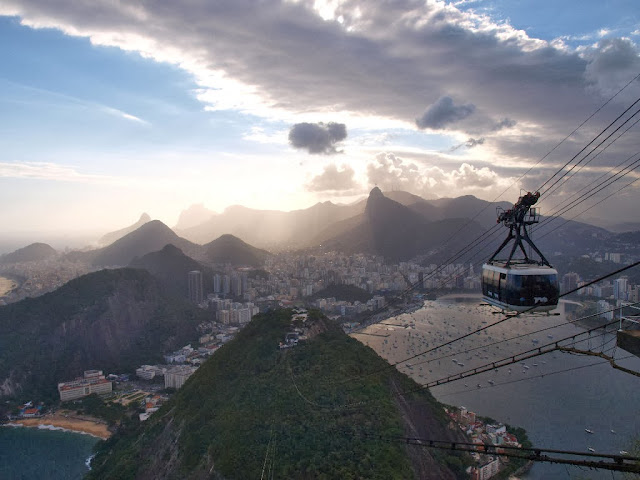 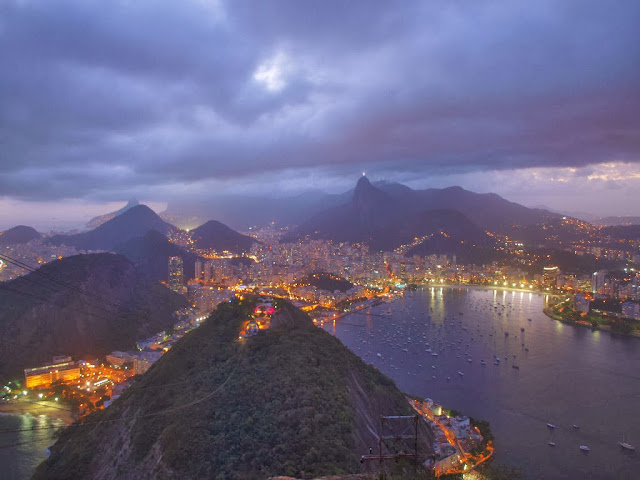 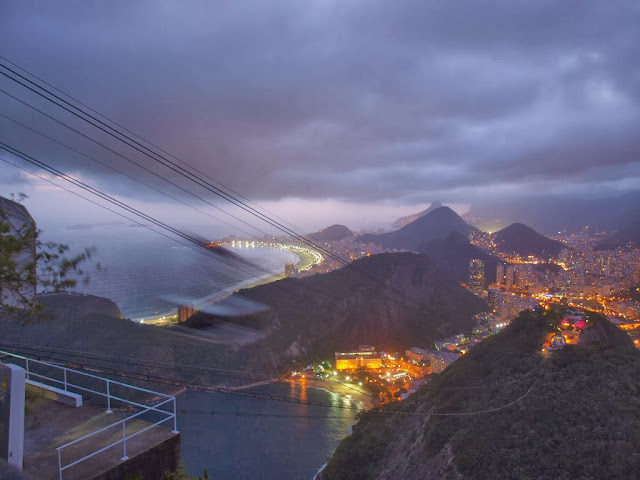 Beautiful Macaw or Arara as the call it here (because that's the sound it makes!) just chillin in the park 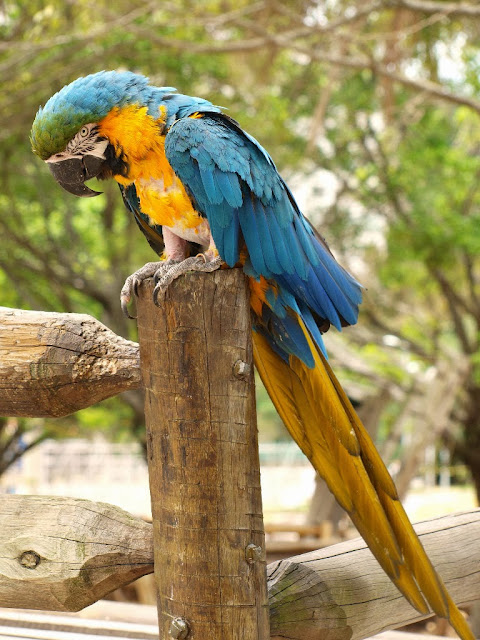 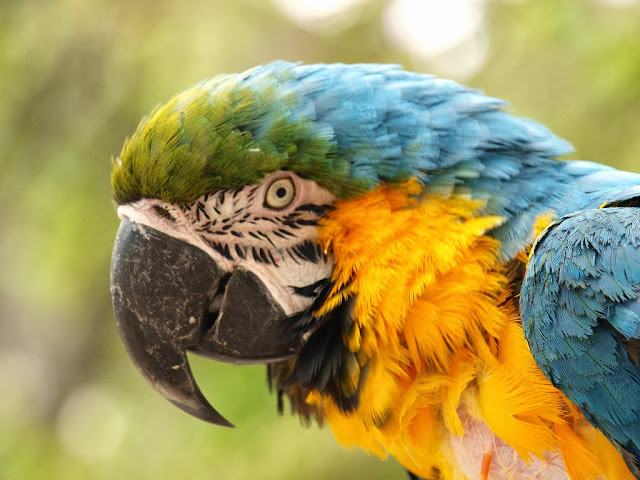 We hired some bikes and rode along the beaches, here Ipanema 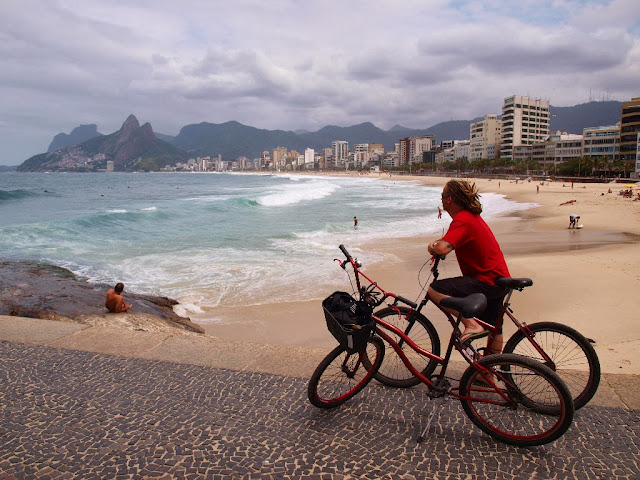 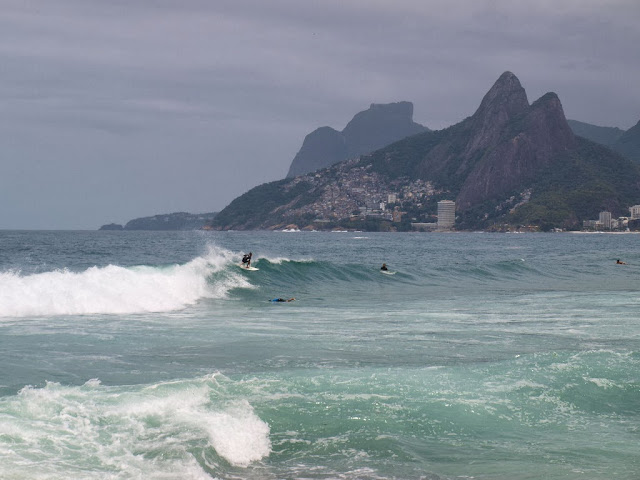 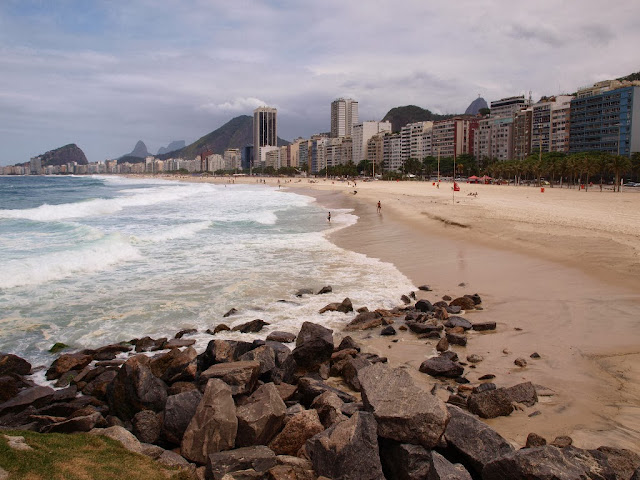 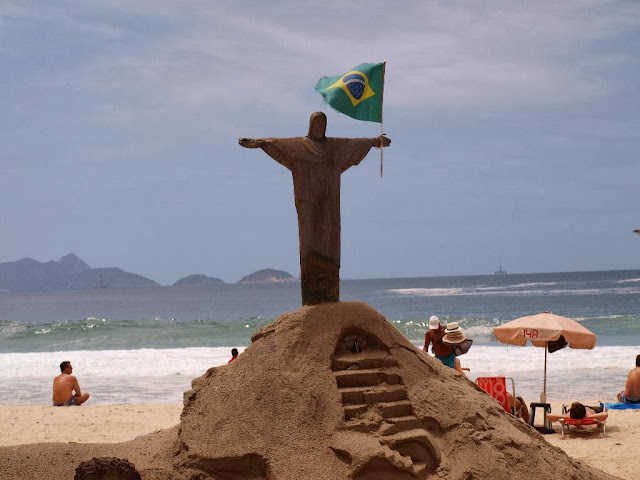 As well as four lovely ladies... 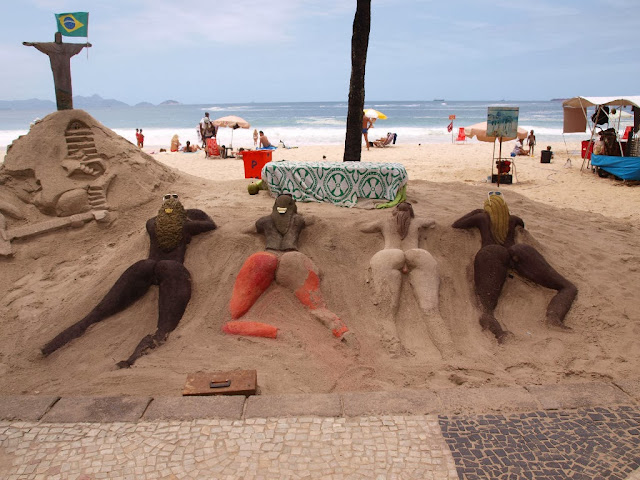 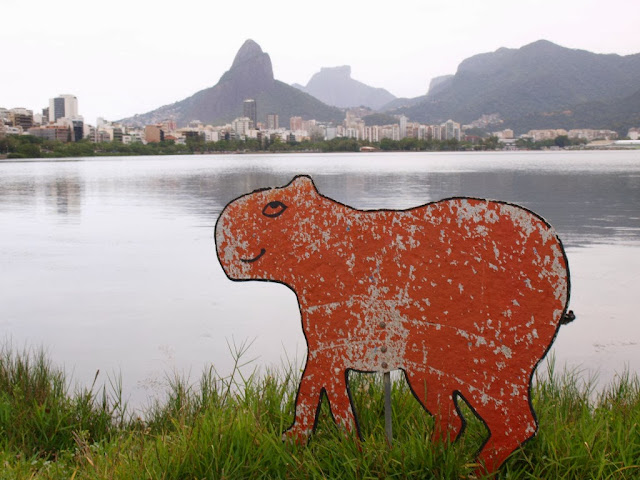 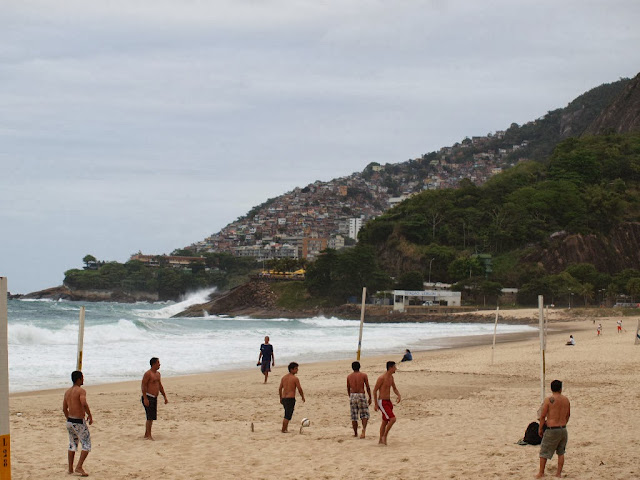 Probably the favela sitting on the most prime real estate in Rio, right next to Leblon beach 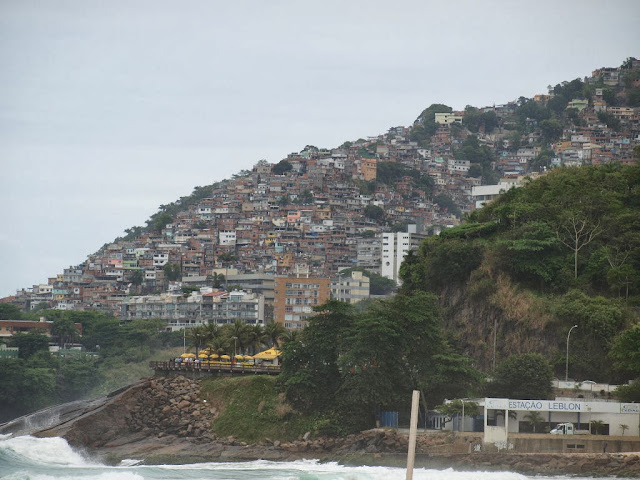 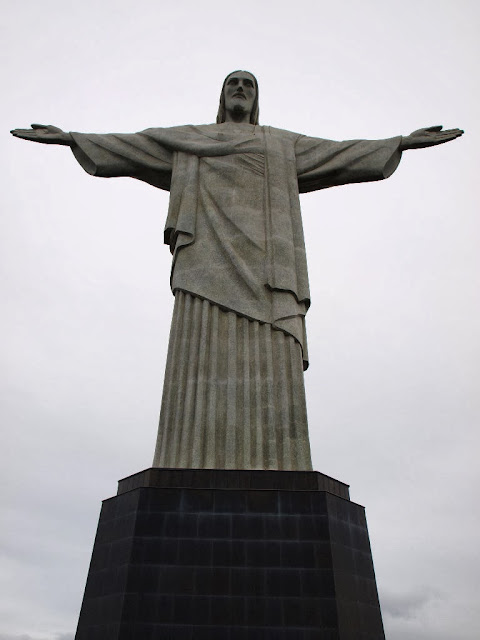 Overlooking Rio from the Christ 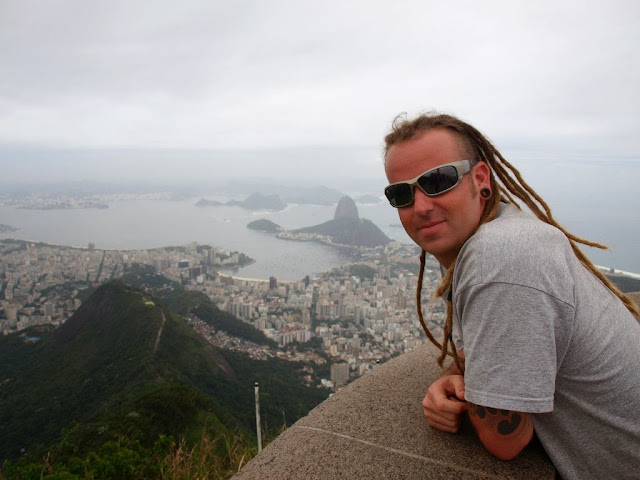 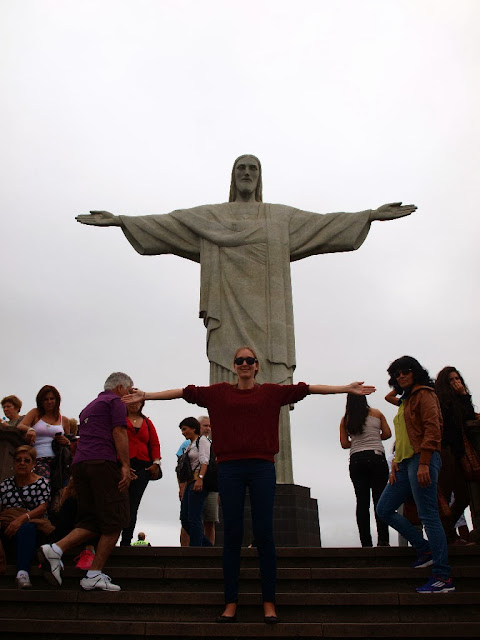 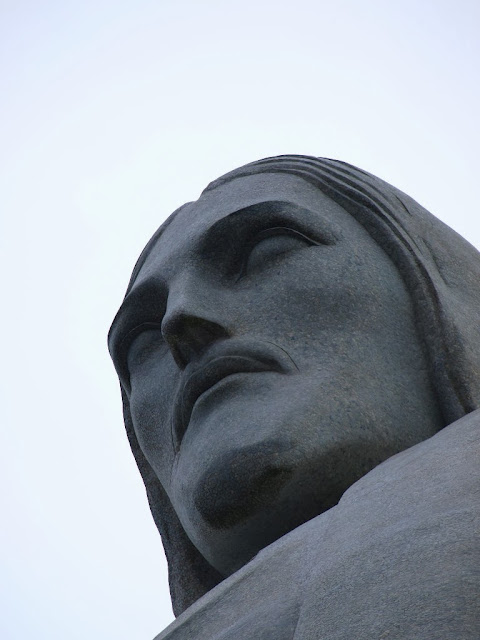 At the samba school; this guy kisses dudes 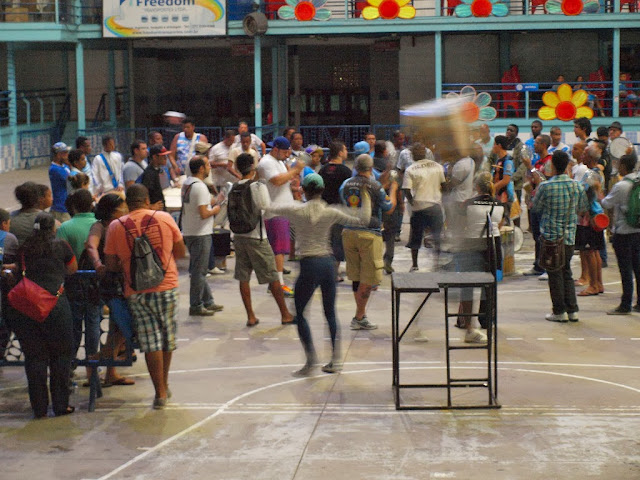 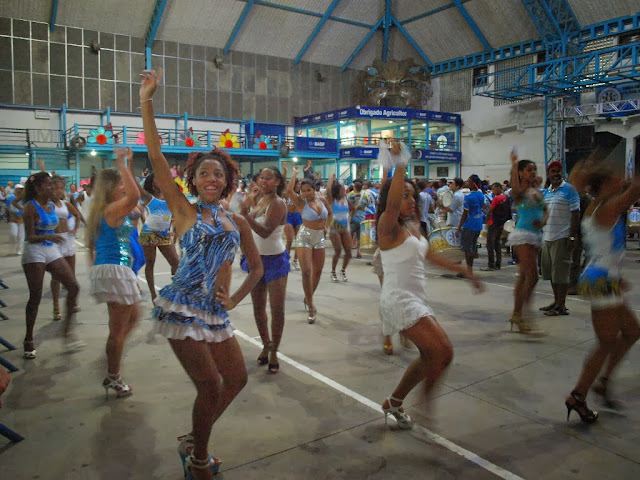 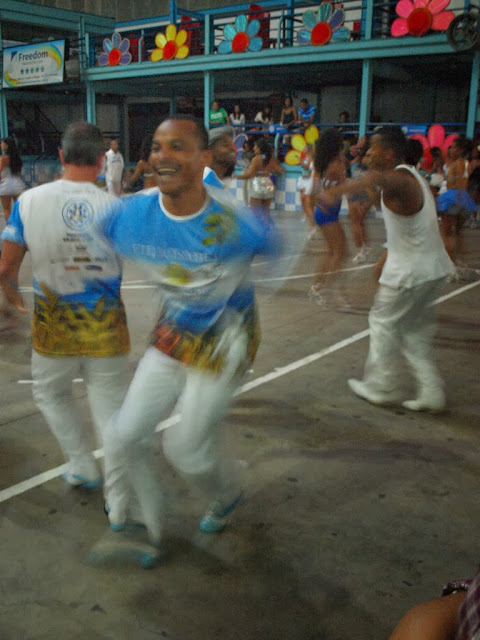 This dude reminded me of Lou Bega and Mambo no. 5, either way he clearly thought he was the shit 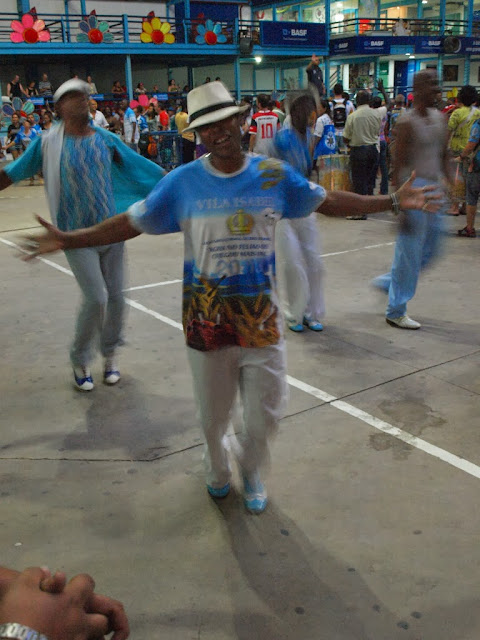