We decided to spend just the one night in Gilgit as there was not really much to see or do in town so we took off for Karimabad just 100km's away. This part of the trip was by far the most stunning of all we had seen this far. The snow topped mountains now reaching high into the sky, some getting close to 8000m, with beautiful green fields and the moon-like brown earth made a stark contrast to the beautiful blue skies around us. The road was in a really bad state but the slow going gave us the opportunity to take the scenery all in. The largest of the towns in this area is called Alliabad and who were we to run into here? Our good friend Frank from Germany who had left his bike out by the road in front of his hotel so we knew where to find him. Since first meeting him back in Chiang Mai the only country we had not run into him was in India. We met up on our way to Karimabad just a few more km's up the road where he was off sightseeing by foot. We made plans to ride further north the following day and see if we could make it as far as the Chinese border, just one thing was in our way. A few years a go a massive landslide caused major problems for the locals when the road was completely destroyed. The landslide was so big and with the melting snow and river that runs through the valley a lake has now been formed that cuts the road off entirely with the original road some 20 metres below the water line. There is however a boat service that takes the few tourists that still come here across and provides the essential service for locals needing to get goods to and from each side. We had heard of a few people taking their bikes across and that was our plan. When we arrived that plan was not looking so good, the road leading down to the lake was in a terrible mess and being worked on. The departure angle from the land down to the boat was very steep and there was no room for error here. After spending well over an hour here we all decided it was not worth the risk. Had we been going to China we would have had to do it but since we weren't why risk it. That's when Sanne's bike gave up the ghost, no sign of life in her battery so that was it for that plan. For now on in we were going to have to bump start the bike until we could get it sorted. Not a place you really want to have bike problems.


We decided to hang around in Karimabad a while as we really enjoyed the feel of the place. This part of Pakistan is nothing like the rest of the country. All the people here are very friendly some even inviting you into their shops just to talk with you and give you a drink with nothing else but with friendship in mind, no sales pitches or anything else. You even see many women in the street here something that is a rarity compared to many of the other towns and cities we have passed by. Some towns you will not even see a single woman and it is strange to ride through a bustling town only to see men everywhere and it wasn't only Sanne that missed seeing women out and about. Our time here was spent just lazing around and occasionally venturing off to have a look at nearby villages. There was good company at our guesthouse and this is where we met Attiq and his wife who were there on holiday with their children from Islamabad. We spent a bit of time with them and learnt a little more about the way of life here.

The next few days were spent running around trying to get the problem with Sanne's bike solved, thinking it was just the battery we ordered one from Islamabad. By the time our battery had arrived we had serviced the bikes and were off. Only problem, the battery needed charging and with power supply here being basically non existant (5 hours of power in 5 days!) we needed to head back to Gilgit to sort it out there. So this all happened easy enough with the help of Amir, a local mechanic in town who was more then happy to help. Battery was charged, bike was starting again and so we headed off south again and back to Islamabad to catch the train to Quetta. Two problems here, first the road had been cut off by a landslide and we were going nowhere for the rest of the day. Problem two was the bike had stopped starting again. This was not a battery issue, this was electrical. So we headed back to Amir and in no time we had the bike stripped down and we came to find the problem, a burnt out coil. So this was a real issue, we had only 5 days to get back to Islamabad and needed the bike to be in going order but with no big bikes in this region a new coil was going to be hard to come by. Luckily Amir had a secondhand stator coil lying around which was exactly the same as our original stator! However, we still wanted to see if we could get a new stator.

In the mean time we had done some research and had found a good mechanic in Rawalpindi who should be able to help us with our situation. Luckily enough the bike held out and we made it back south with little worries and with two days to spare before we needed to catch the train. Unfortunately we were told by Mr Bashir our mechanic that there was no one in Pakistan that could rewind our coil and no chance of getting one to fit with such short notice, bugger! So the next job was just to do a good overhaul and strip the bikes down and give them the once over. Valves were checked, plugs replaced, oiled, lubed and greased everything. Then there was my bike, the weight I had been carrying and the condition of the KKH had played a toll on my bike. I had snapped off a lug on the rear subframe that supports my pannier rails along with snapping a part on my pannier rails that fits to the bike. We had come to the right person though and in no time the rail had been rewelded at a nice cheap cost of 100PR ($1.10). The subframe being alloy was going to be a little more difficult but instead of welding we had a piece of alloy fabricated to fit and strengthen the support system which worked a treat and can't be snapped off again, last time it happened on the Gibb river road back in WA. The best thing about it all was that we had managed to get everything done in time to catch our train to Quetta. The down side was Sanne's bike still needed a coil and we still had to cross Iran in eight days. Some more planning and hopefully we can resolve the issue properly in Turkey.

That is the Lady Finger sticking out in the middle 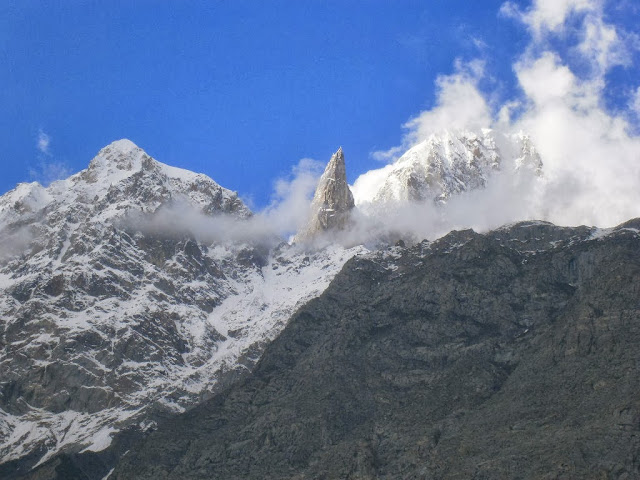 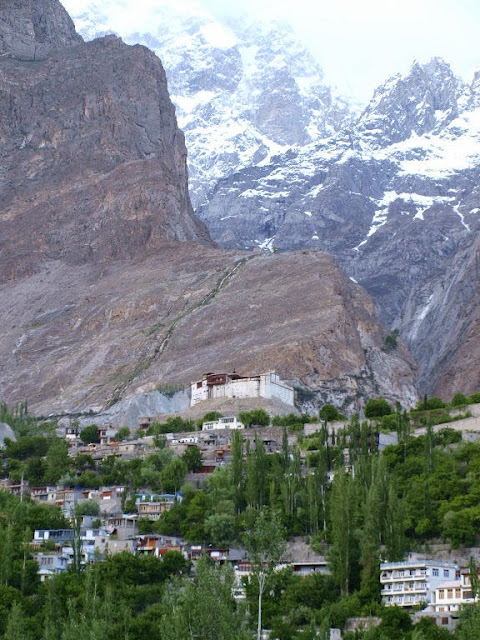 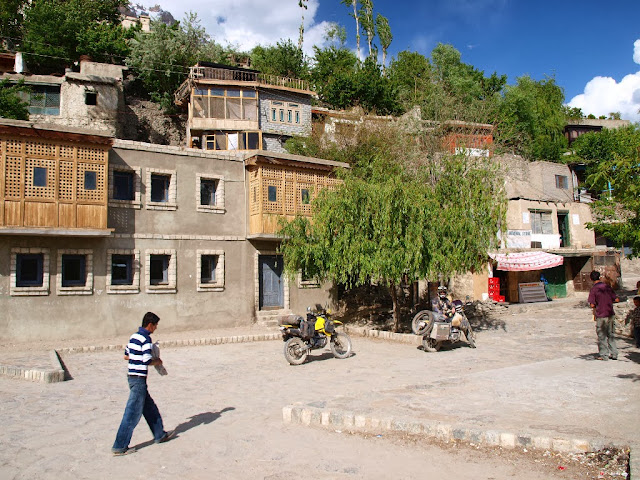 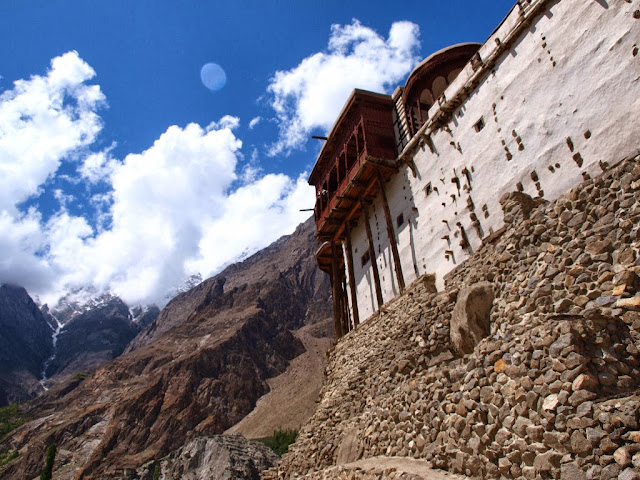 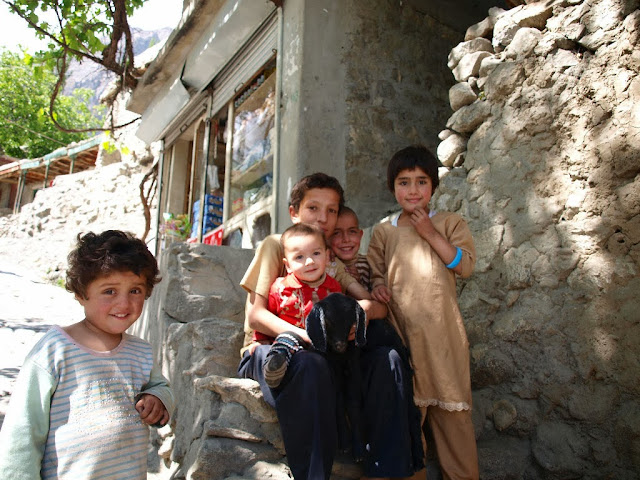 Out and about on one of our daily rides 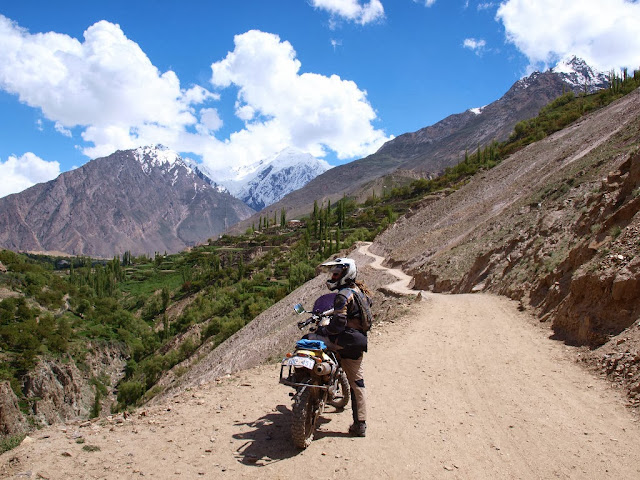 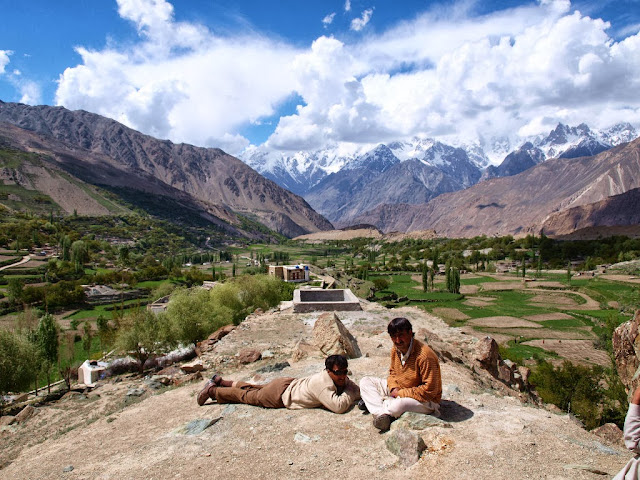 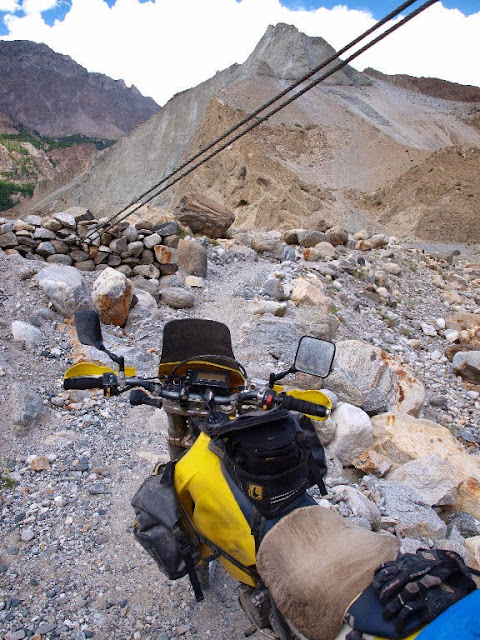 The view across the valley from our guesthouse 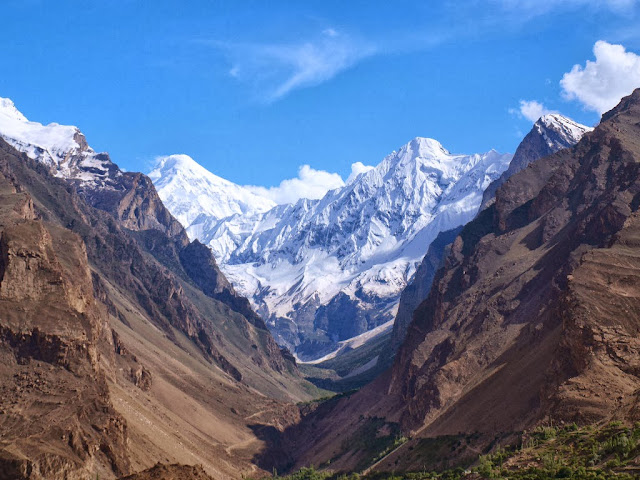 Sanne dressing to impress the locals 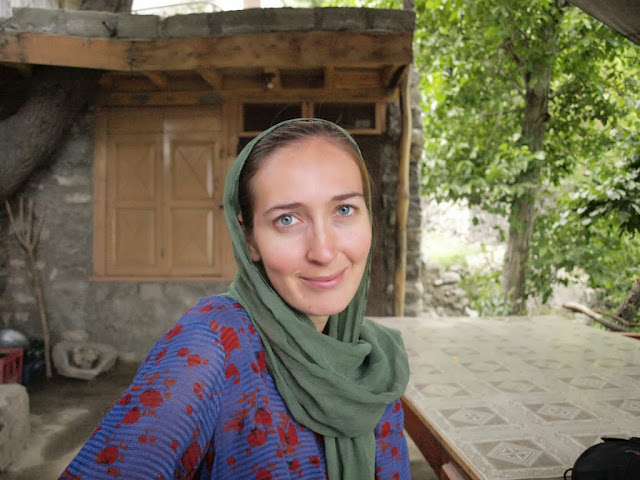 While I just became a little more feral 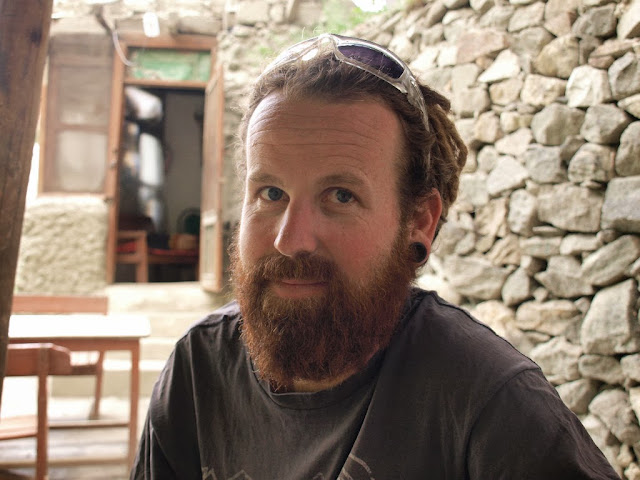 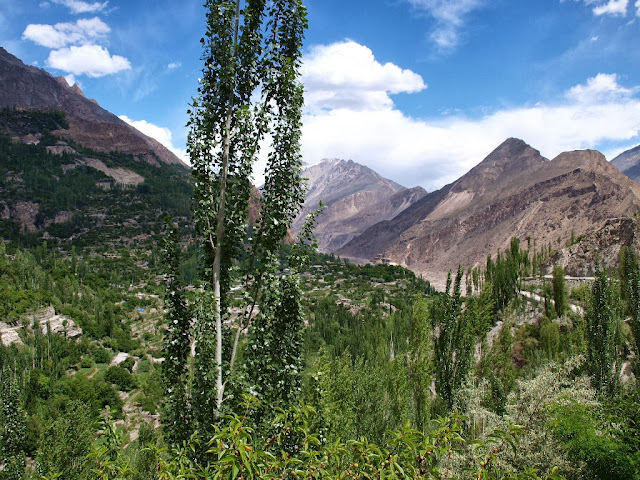 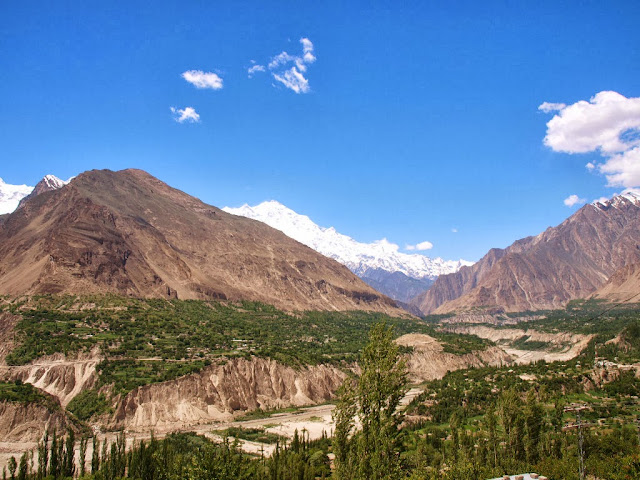 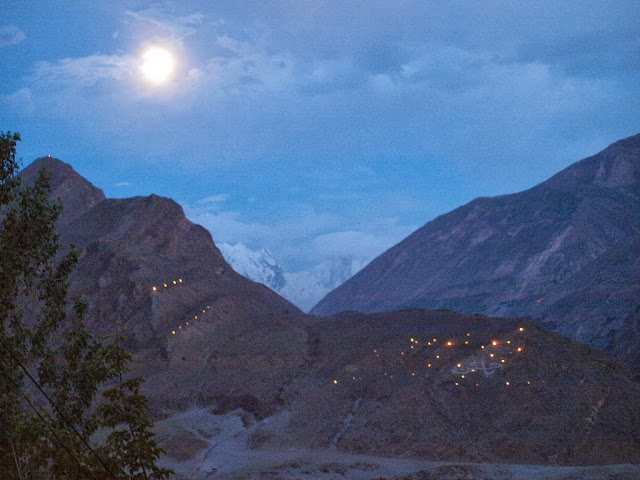 Attiq and his wife Shaista 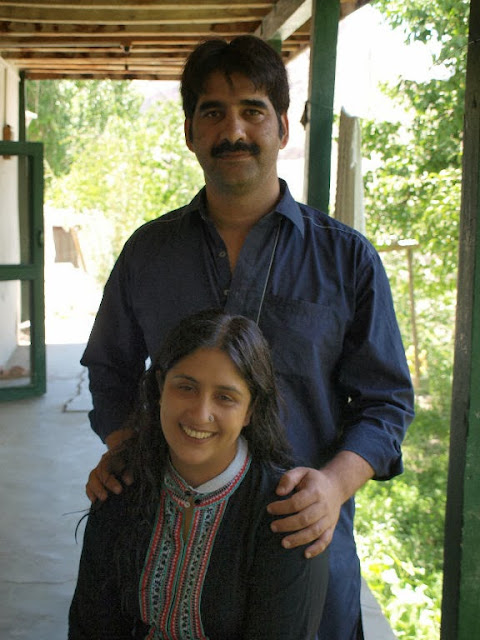 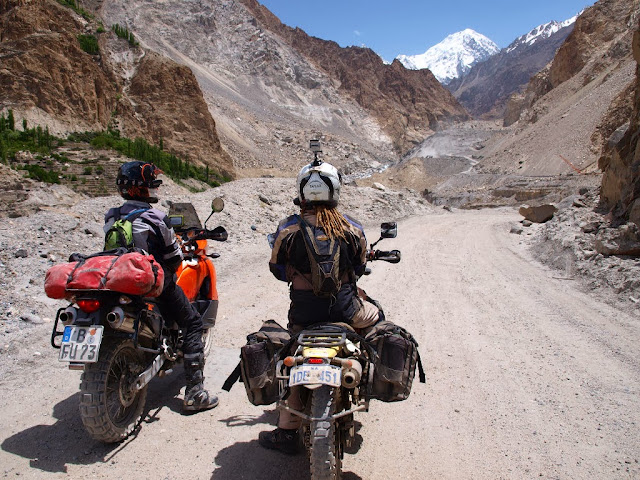 Yes, there is a road 20m below this lake 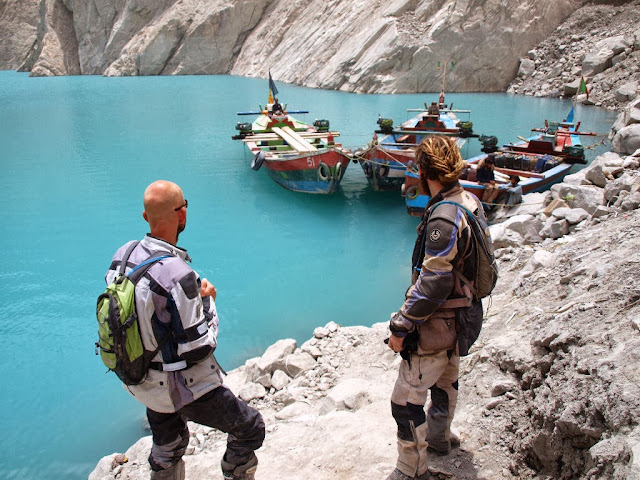 The "road" down to the lake 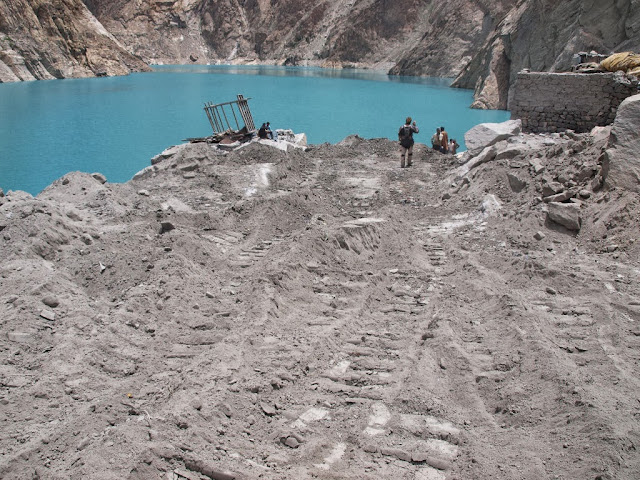 Hmmm, what to do with this bike... 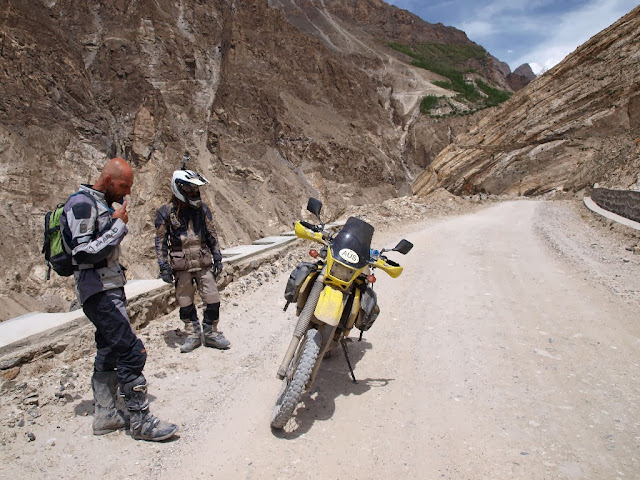 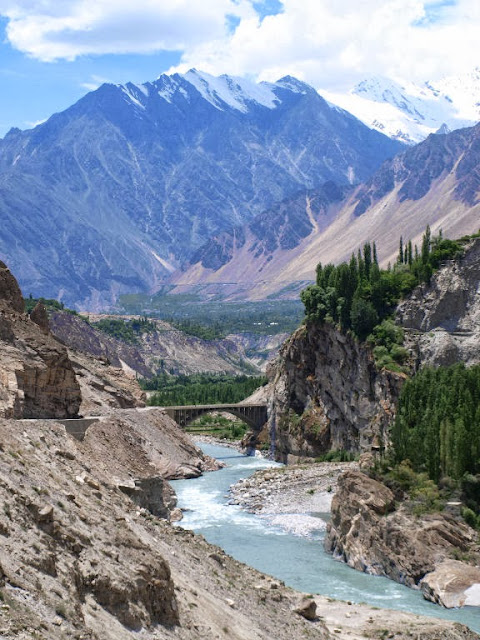 Amir, our friendly mechanic in Gilgit who got Sanne's bike going again for us but is still in need of a new coil 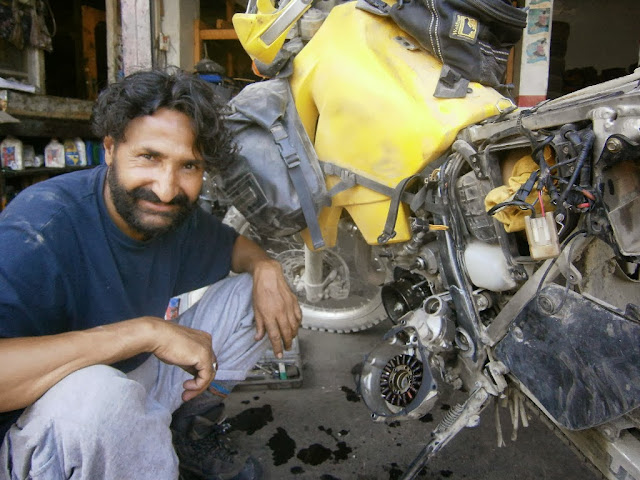