South is the Word!

After freezing our butts off at Erzberg we had one thing on our mind and one thing only: SUN!
This meant the trip could only go south and weather reports were studied fiercely to pin down places with the biggest possibility for the sunshine we so badly needed. We hit the road and headed for Southern Austria aka East Tirol. Our destination was Lesachtal where we had been last year and loved it. It was a nice ride for the three of us (Frank was still traveling with us), and lucky for us Frank had lots of really detailed maps that navigated us on to some small and beautiful roads through the mountains.

Just before Lesachtal we stopped in at a Lidl supermarket to get some supplies (read: wine). When we came out to the bikes again Frank was standing and chatting to an older gentleman. Hmm, he did look a little familiar didn't he...? Turns out we met this guy last summer, in this same carpark, and he had given us all of his bananas which had earned him the nickname Banana Man. Now almost a year later he was riding past Lidl when he noticed our bikes. He even showed us the business card we had given him last year which he carried with him in his wallet. It certainly is a small world! This time he had no bananas with him, instead he gave us a box of cookies.

After this funny encounter we rode into Lesachtal which is a valley that runs along the border with Italy. It has got to be one of the most beautiful places I have ever been. I could go back there time and time again. The road is tiny and windy and makes for great motorbike riding. This time there was still snow on the mountains which made it even more spectacular.
We stayed at the same pension as last year: Gasthof Luggau in the village Maria Luggau. The couple who runs it are both ex pro-skiers and are absolutely lovely. Frank didn't hesitate to take a room for the night where as for Mark and I, although we really wanted a room too after doing it tough at Erzberg didn't think our budget could stretch to the 58 Euros it cost for 1 night. So, we were back in the tent again! At leas tit didn't rain...or snow! It was still really cold at night though although the days were beautiful. We were both longing for nights where we didn't have to sleep with 5 layers of clothes on us.
We met some funny types at the Gasthof. One of them an older Dutchman on a motorbike who told us how back in the 70s he had driven a truck from Pakistan to Holland. What were you carrying, we asked him? "Three-and-a-half tons of hashish" he said matter of factly.

The day arrived when we had to say bye bye birdy to Mr BJ...eh I mean Frank! His three weeks of holiday was almost up and he had to be back in Berlin to return to the dreaded notion of Work! He was trying to calculate which route to take as some mountain passes were still closed and some areas still flooded. Some summer holiday! I do hope though that he had had a good time (we certainly did) and at least it should make for an experience he won't forget any time soon. Frank, start training - we'll see you at Erzberg 2015 - and this time we're racing! Get the Orange Diva ready and your bike too :) Seriously mate, we had an awesome time with you, thanks for lending us your great company on the road.

After Frank had gone we were meant to leave too, but we were too lazy so we ended up staying an extra day at Maria Luggau before heading into Italy the next day. The day before I had managed to get hold of my friend Nadia whose dad Bruno (also a good family friend) lives in Trieste. We arranged to go stay with him in Trieste for a few days so that was our destination. We crossed into Italy via the Plockenpass and then took small roads through Slovenia via Passo di Nevea which neither of us had ever heard about but which provided some of the best riding and scenery of the trip! It's kind of out of the way and hence does not see a lot of traffic which makes it even better. There was a bit of a storm brewing when we were there and we got a little wet but it was so cool to hear the thunder roaring through the mountains. The storm stayed at our tails the whole way to Trieste. Then when we hit the coast it was all sunny blue skies.

We found the Piazza D'Unita and Bruno came and picked us up from here. It was great to see Bruno again after seeing him last year in Lignano. He made us feel completely at home and was the best host we could have asked for. The first night he took us out for dinner and beer which was all we wanted! The next few days he took us around showing us sight of the city such as the Castello di San Giusto which is a castle situated on a hill above Trieste from where you get a great panoramic view of the entire city and to Grotto Gigante which is as the name suggest a Giant Grotto! All very cool and in very good company. He also helped us determine where to go next. By now, we had started playing with the thought of going down through Croatia and taking a ferry from Dubrovnik to Bari, Italy. Which was exactly what we did. The only worry was that since Croatia is not yet in the EU, our European vehicle insurance wouldn't cover us were we to have an accident. Well, we decided to take the chance. After some very enjoyable days in Trieste we said goodbye to Bruno and headed for the Slovenian, then the Croatian border.


Banana/Cookie Man at the Lidl carpark 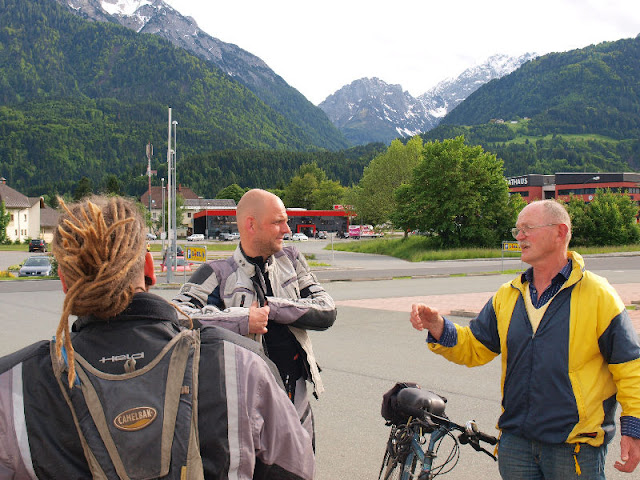 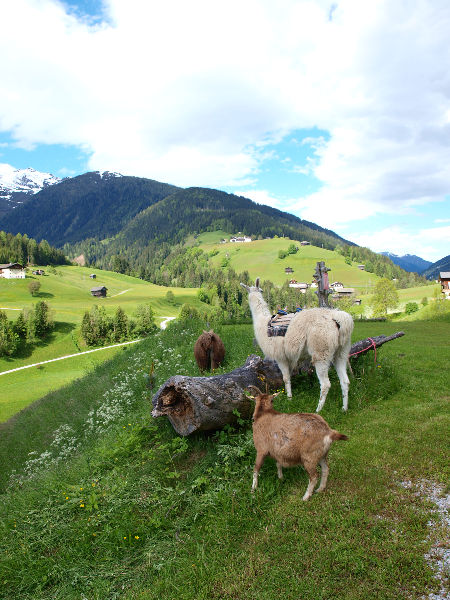 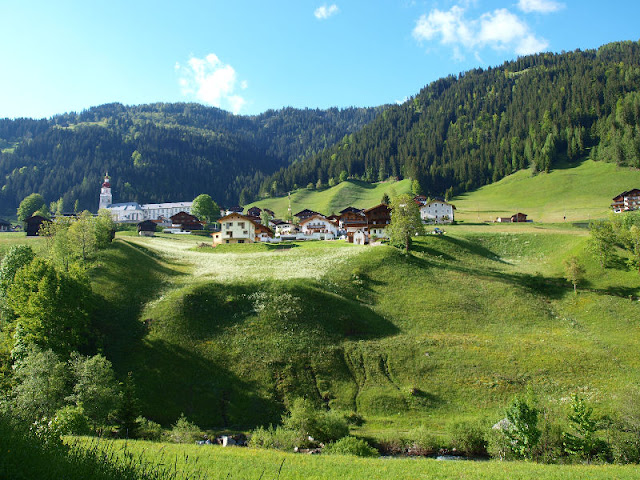 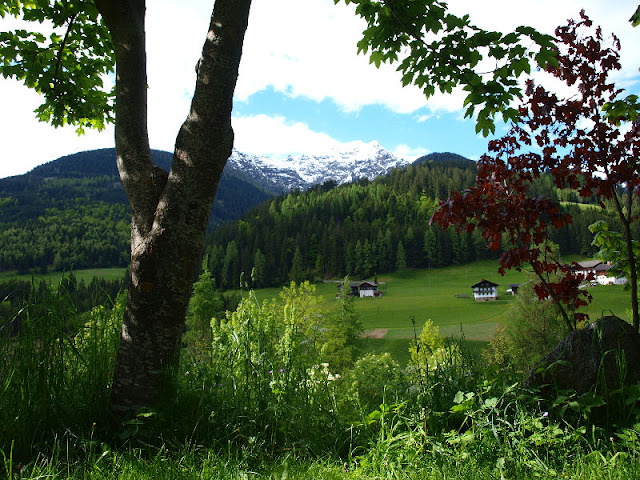 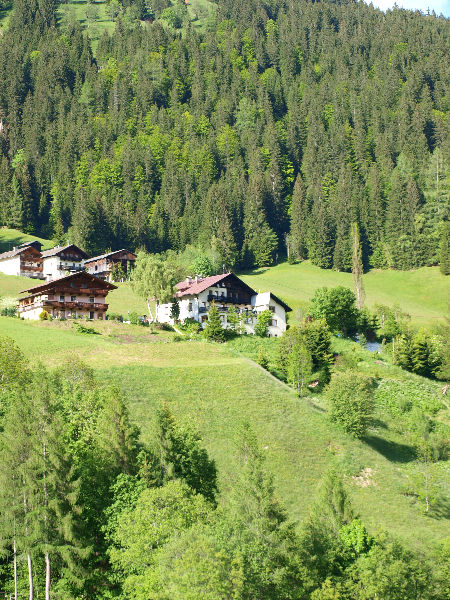 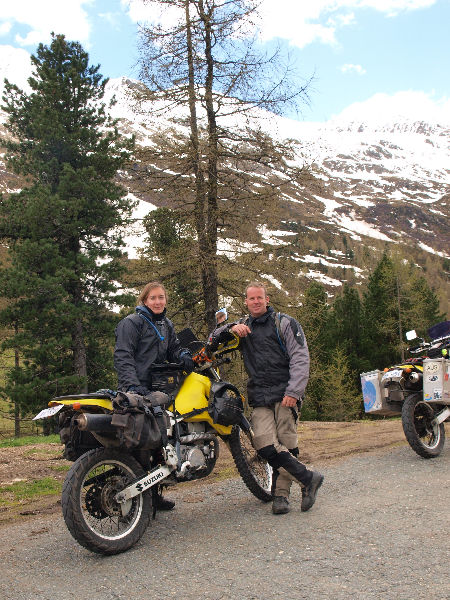 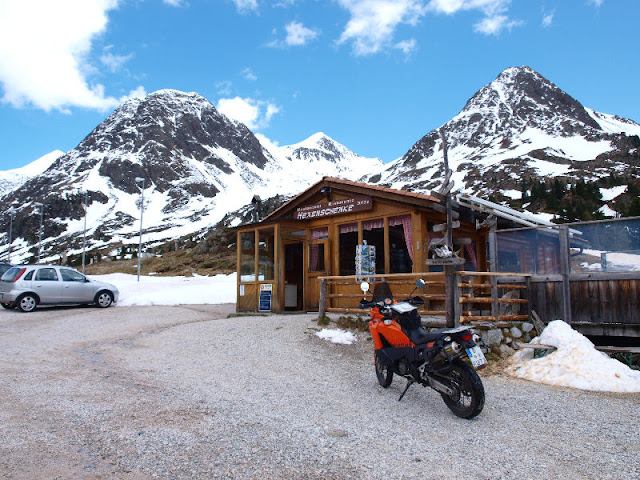 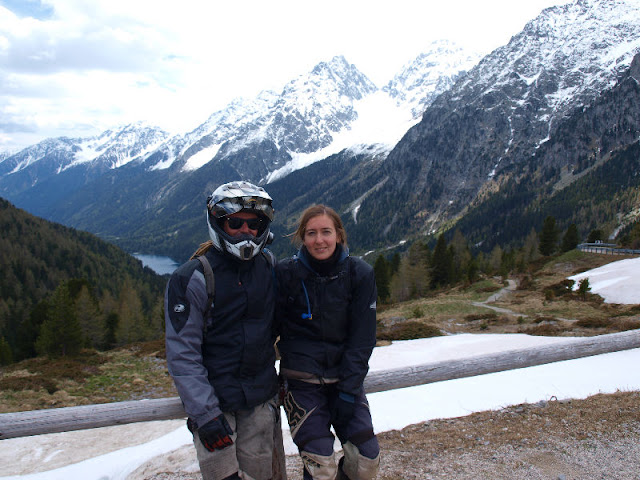 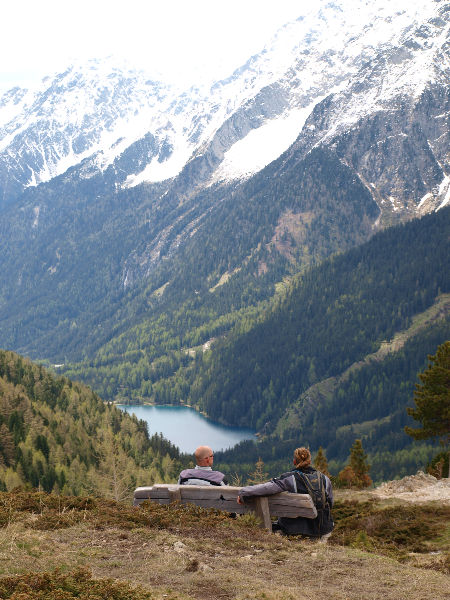 Still quite a bit of snow around 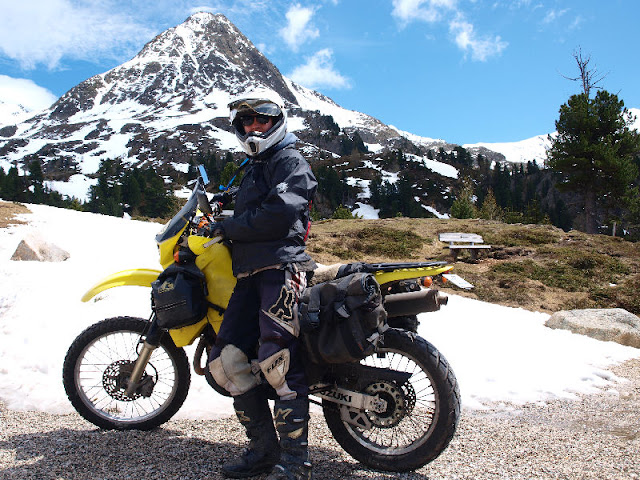 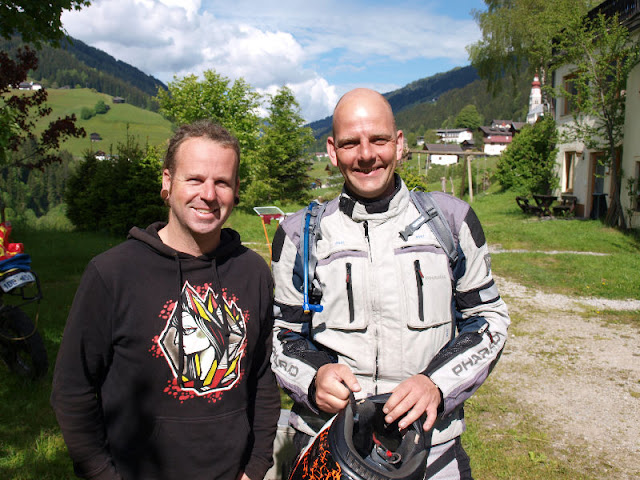 Frank getting ready for take-off 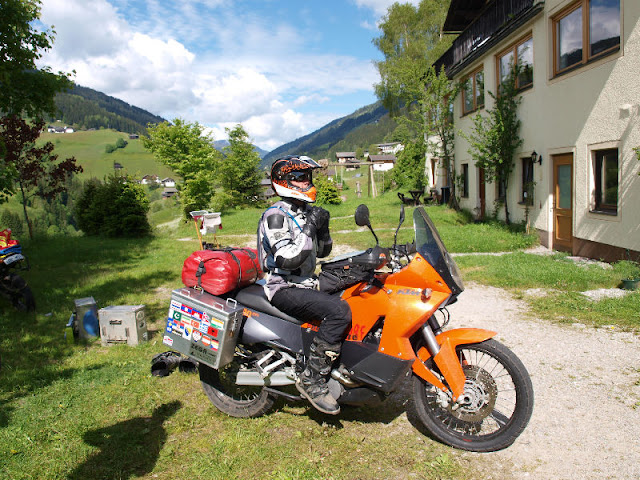 Some Swiss bikers who flagged us down to help them with their flat tyre.
After we helped them by giving them some glue they gave us 20 Euros! 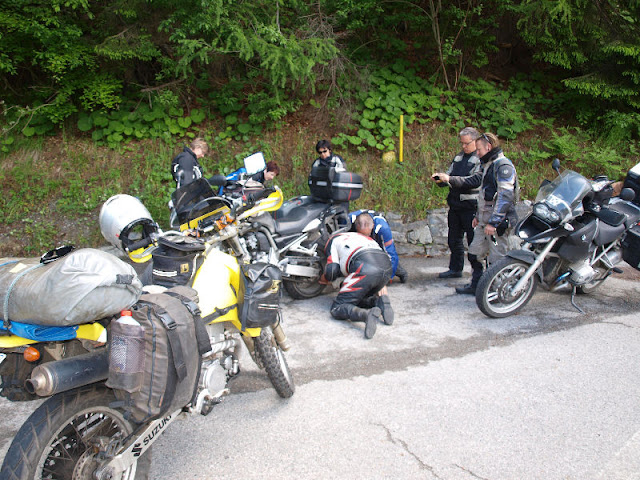 On the Slovenian side of Passo di Nevea 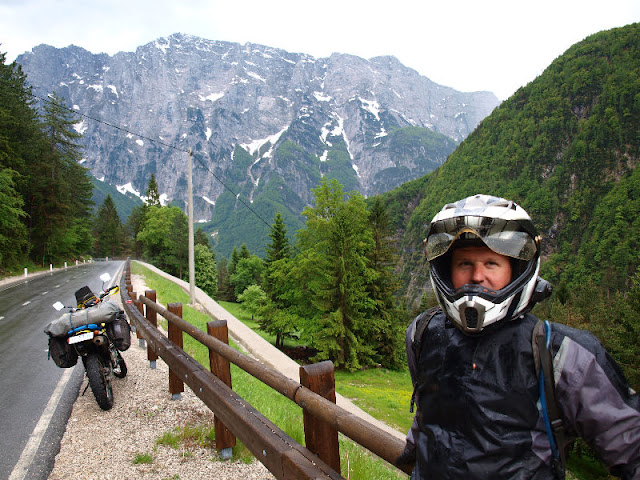 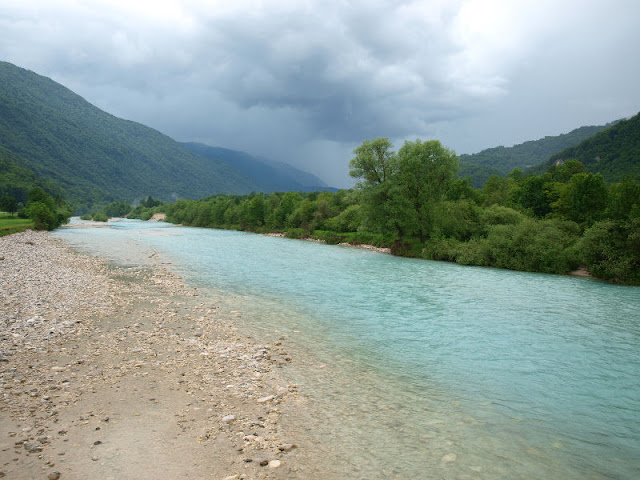 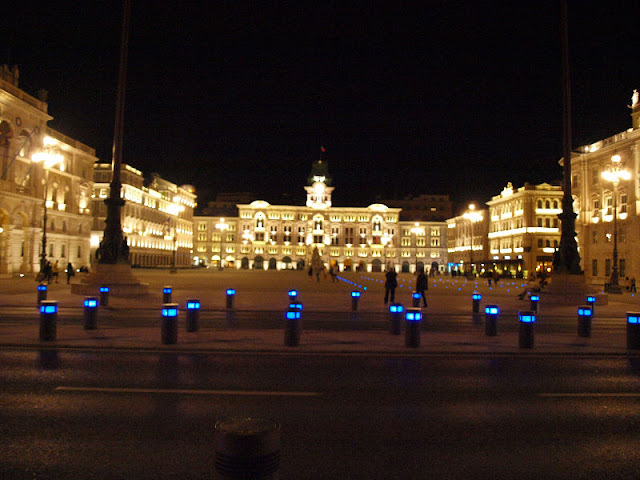 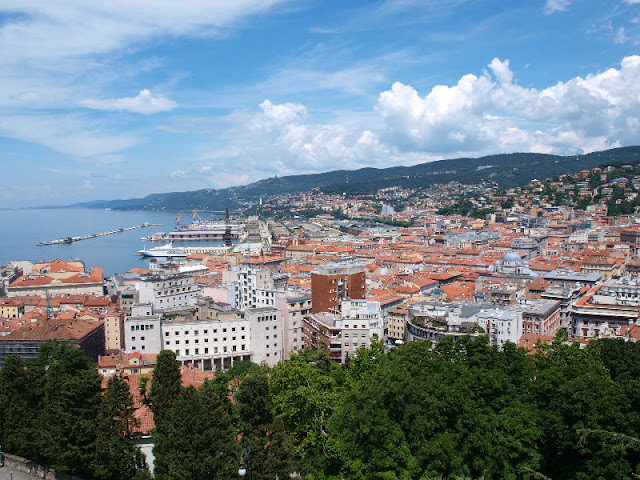 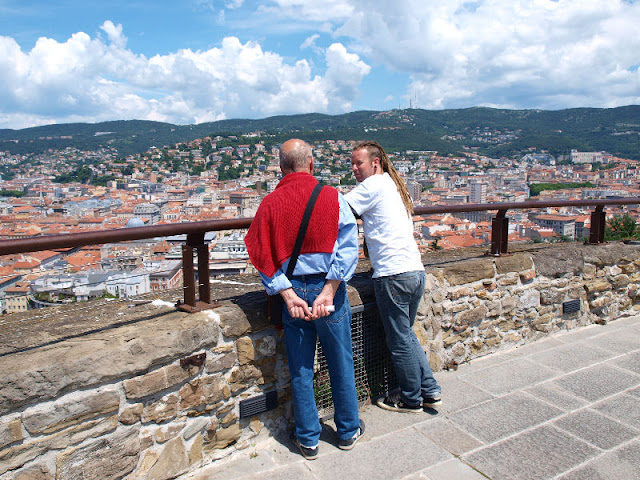 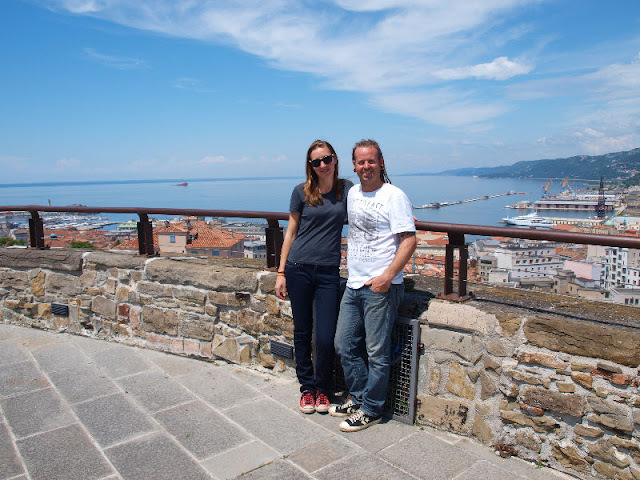 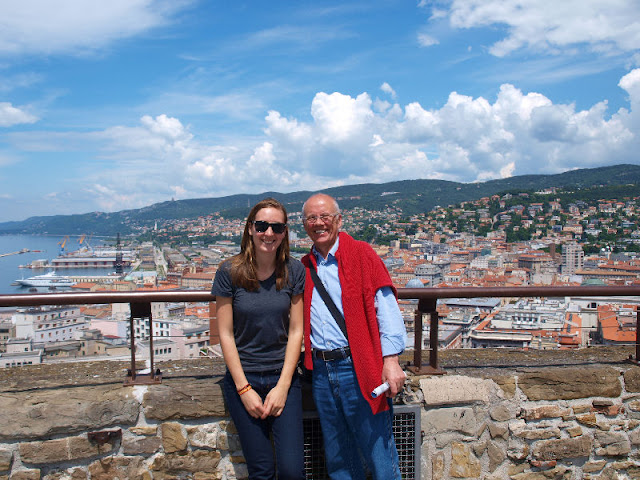 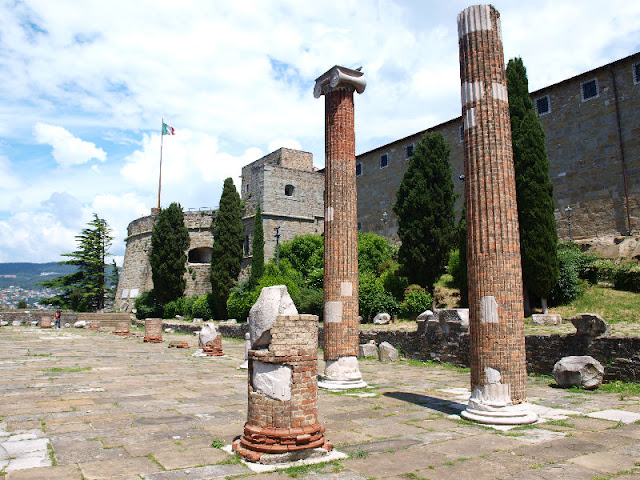 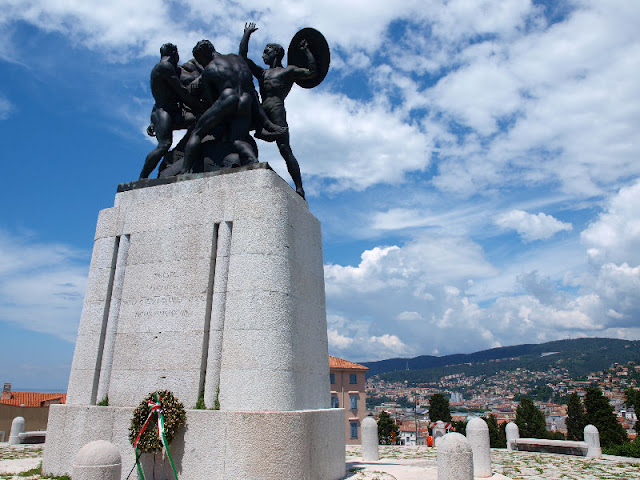 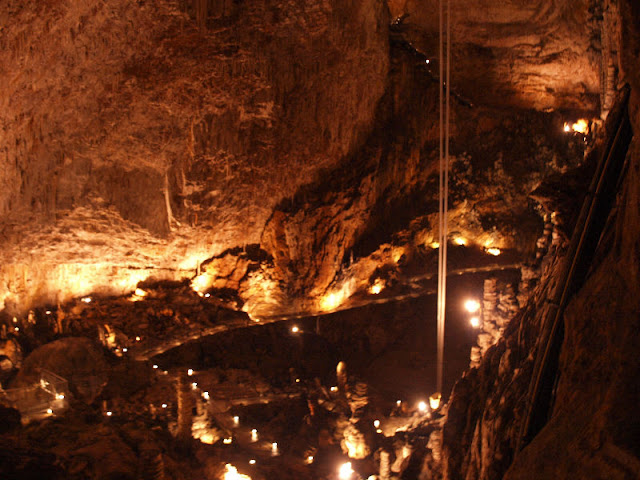