We decided to take the motorway to Amsterdam all the way from Luxembourg. 450kms of hell to me. We both knew that if we tried to take the minor roads it would have taken us two days to get there.There was a bonus however, no tolls on the motorway.

We had arranged to meet with Iaonnis at his workshop: Adrenalinjunkies.nl at 6pm and we managed to arrive right on time for a change. Our change in direction for Amsterdam was all to do with the motorcycles running poorly and needing some much needed maintenance and had nothing to do with the fact that marijuana and mushies etc are so readily available and legal (kind of).

My first few days revolved around getting up early and heading to the workshop with Iaonnis to sort out a few issues with the bikes. It had been a while since we have had any major work done on them.  Iaonnis worked on them in Greece last year so he knew what was needed to be done and had already pre-ordered some parts for us. Sanne’s bike was up first and it was severely in need of a new set of rings, along with a new set of seals that fit around the front driveshaft where it had been leaking sporadically for quite a while now. We also replaced all fluids, lubed and adjusted everything that moves, we measured disc thicknesses and valve clearances and we were happy to find no major problems at all. Iaonnis was impressed at the bikes overall condition especially now that the odometer reading is in excess of 75000 kilometres, 65000km’s of those have been on this journey. My bike had similar issues but the rings were fine as they had been replaced last year in Greece. Just a few electrical things needed to be tidied up. Luckily all the parts we needed were in stock and we had time up our sleeve to take our time to look over everything.

I enjoyed the daily routine of heading off to the workshop, firstly having a brew, checking emails etc, then get stuck in to working on the bikes. There was still one major thing to solve: the carb on my bike, previously Sanne’s. It has been troublesome for some time now and I had hoped to get it sorted at last. So we pulled it out again and cleaned, inspected it, swapped parts off the other carby put it back in again and repeat. Sadly though we were getting nowhere.  Iaonnis said we will just have to put it on the dyno to get a better look at where the problem is exactly. Cool if that is what is needed let’s do it I said! Really, I just wanted to see how much horsepower the old girl still had in her. Surprisingly quite a bit. Out of the factory the bike has an arm wrenching 40hp, now 6 years old and many km’s on she is still packing 38hp on the rear wheel. Yeah I know all you guys out there are having a laugh with your big bikes but all in all I couldn’t be more happy with how these little bikes have performed on such a long journey and with still many, many kilometres to go. I am sure with regular upkeep they will keep going strong.

When we had finished the work on the bikes we finally had time to check out the sights of the city. I would like to go into detail of how much fun we had here but my mind is still kinda hazy and having troubles recollecting what we did. There were many late nights and sleeping in came easy. I know one thing, Amsterdam is one of my top 3 favourite cities in Europe along with Berlin and Barcelona. If it was not for the terrible weather that plagues this place most of the year I could easily find myself fitting in there. Luckily for us we were in Amsterdam on a good week when the weather was at its best and temperatures in the mid-twenties.

We checked out all the usual sights and would have loved to hire a boat for a day to float around the canals but with our tight budget we could only afford a pedal boat, but that was  good enough for me. We still got to see the city by the water and at our pace and where we wanted. And we were not mingling with the throngs of tourists who had flocked here on the crowded tourist boats.

One of the best things was that Iaonnis lives in a really cool apartment very close to the city in the suburb of Jordaan. A very hip and cool place away from the main tourist areas so we got to have a taste of local life, only downside was the cost of living here, it was not cheap to eat out so we had a routine of going out during the day and return in the evening to cook before heading out to a bar or to catch up with Mary Jane in the evening. We had met up with her on previous occasions but those encounters seemed to be more regular here in Amsterdam.  We would find her at a bar, then out on the street and in all the cafes.  As each day passed I was finding it harder and harder to tear myself away and our departure date was getting put back. There was a reason of course and it was that my cousin was in France and I was really hoping to meet her in Paris. She would be the first person out of my friends and family that we finally had the possibility of catching up with on this trip. 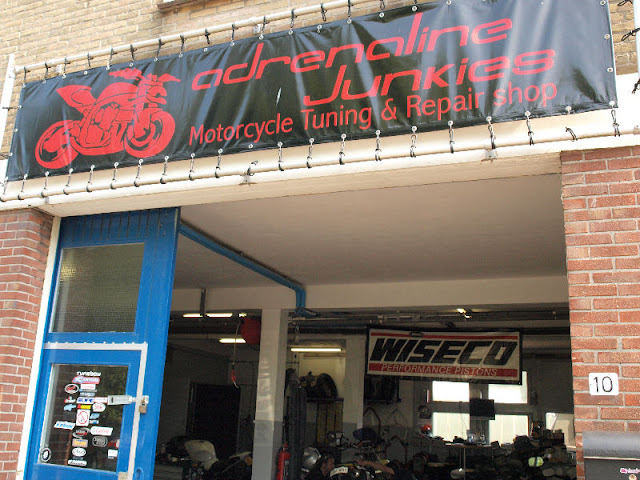 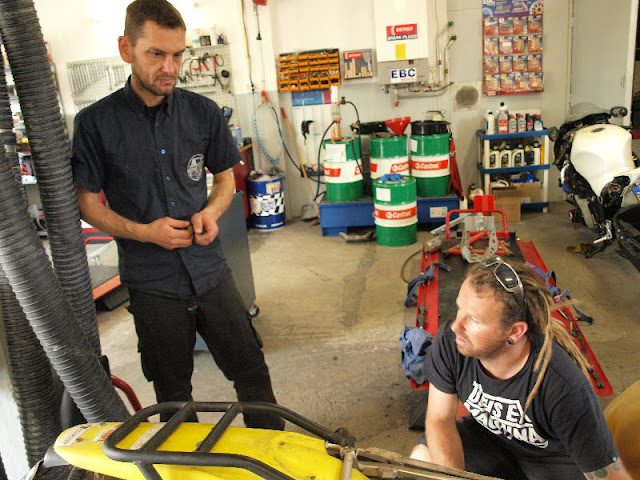 Sanne's bike getting a new set of rings fitted 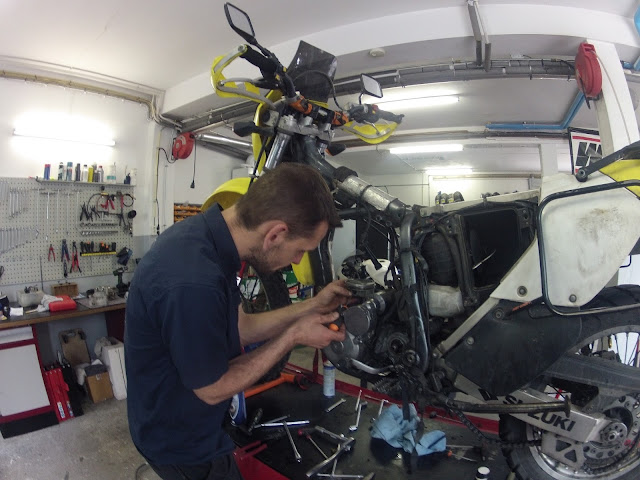 A bit of open heart surgery 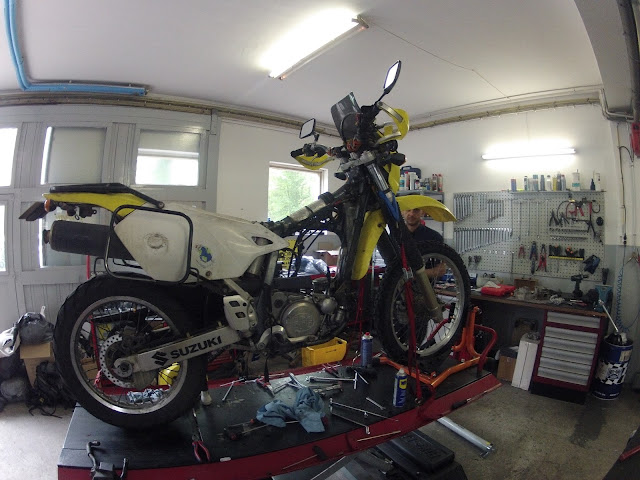 My bike ready for a tune up on the dyno machine 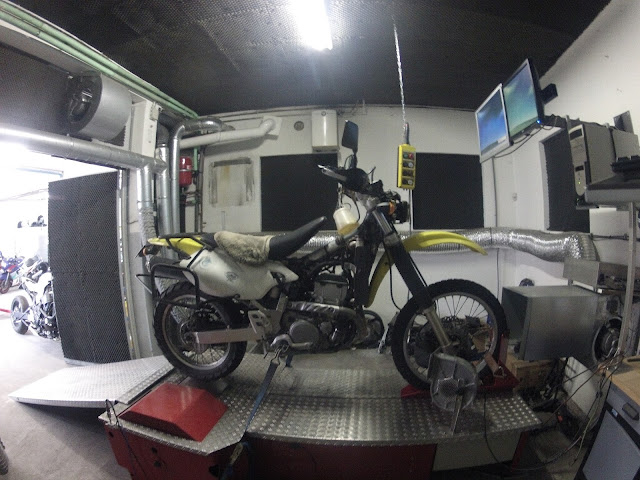 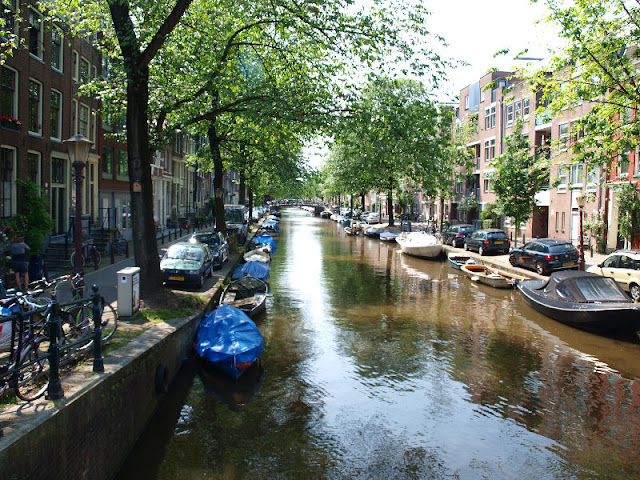 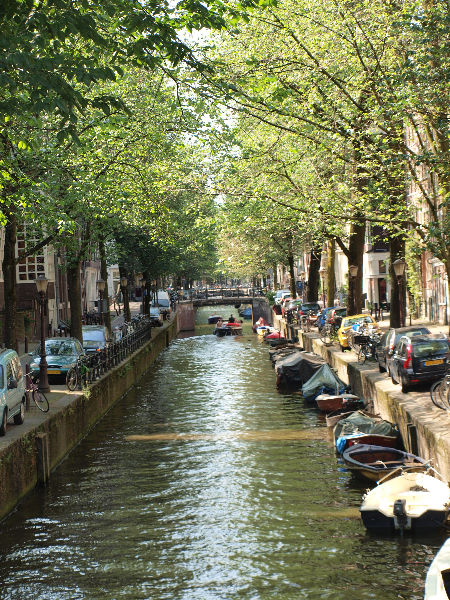 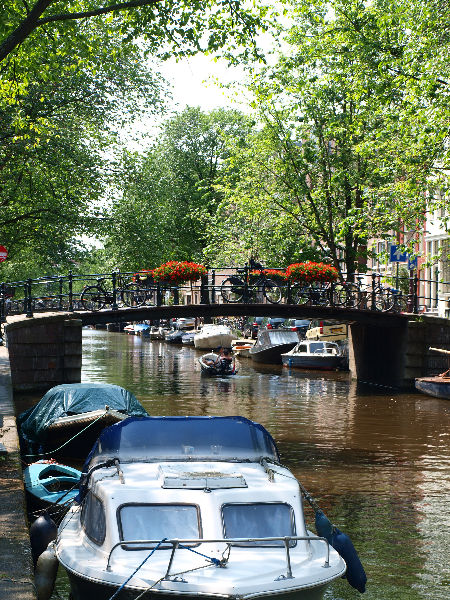 Just a few of the many houseboats on the canals 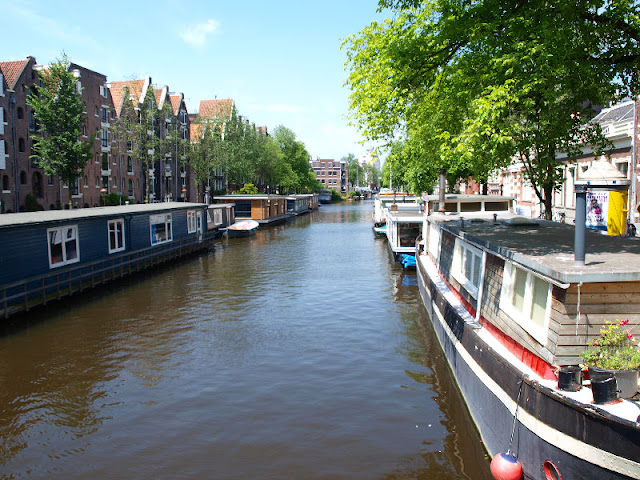 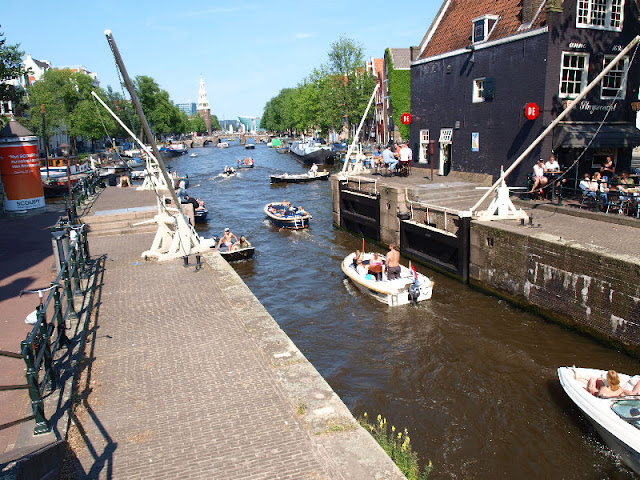 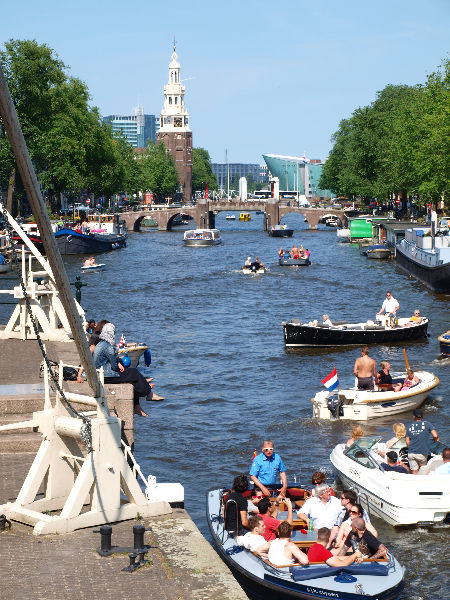 We got in on the action with our little paddle boat! 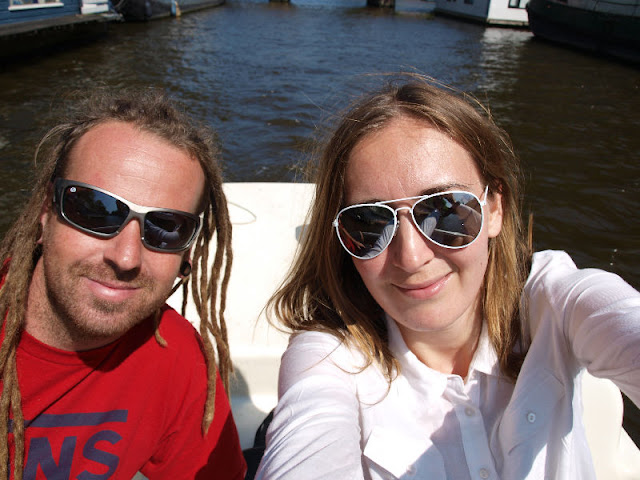 I wish we had had one of these though! 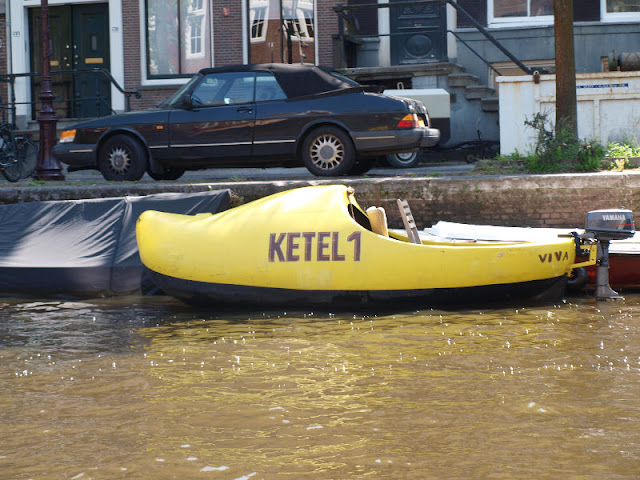 There are so many weird and wonderful buildings, many lopsided due to subsiding 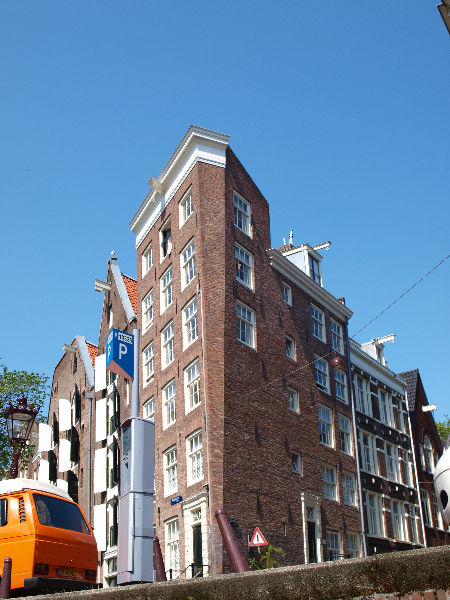 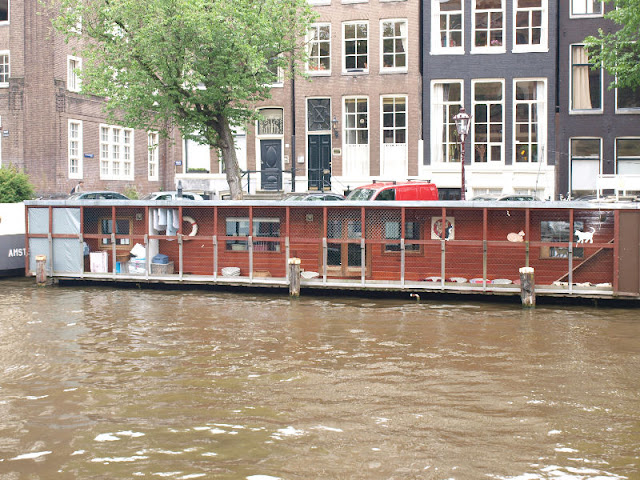 Not a bad life for them now 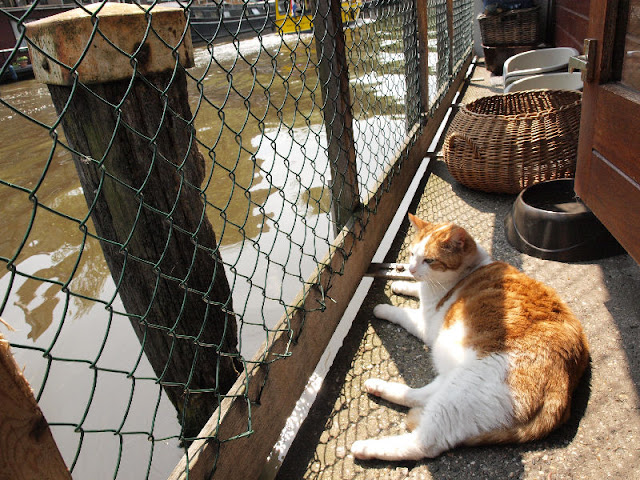 Couldn't come to Amsterdam without checking out this place 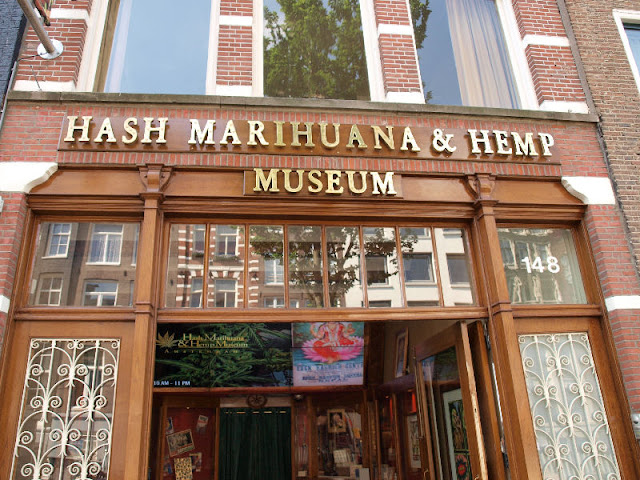 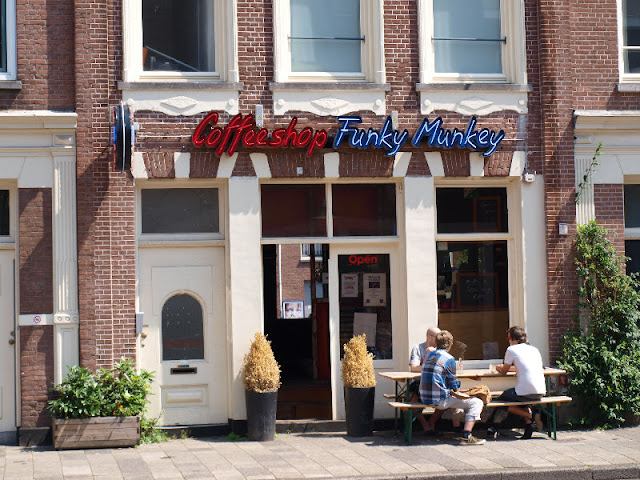 Some interesting things inside the museum 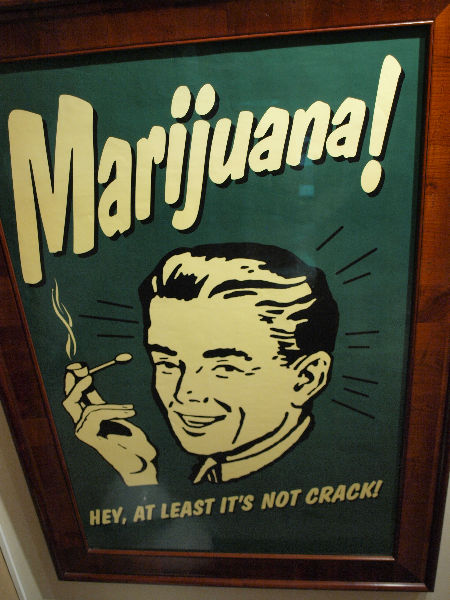 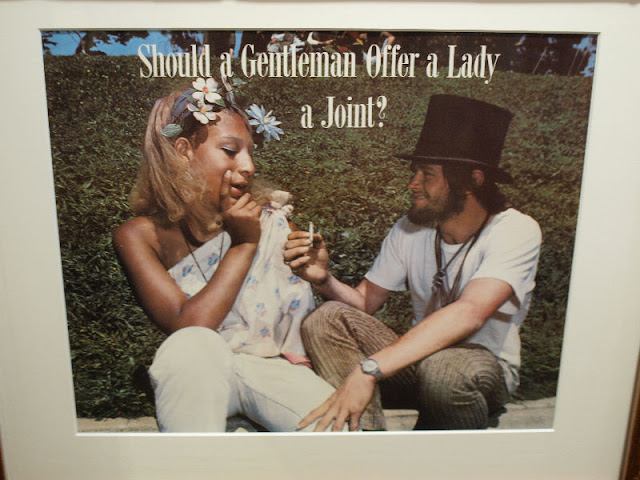 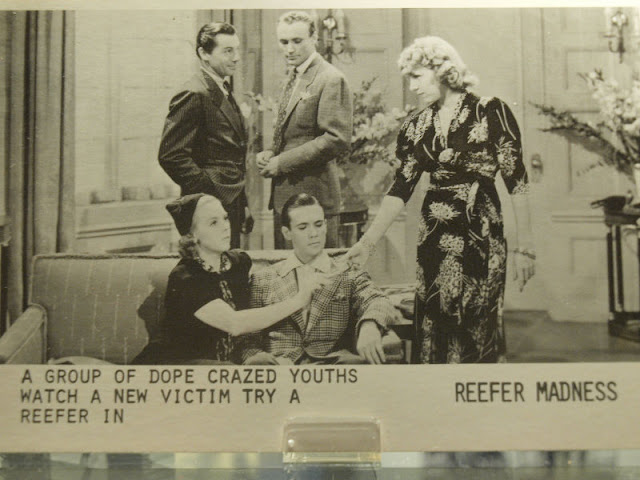 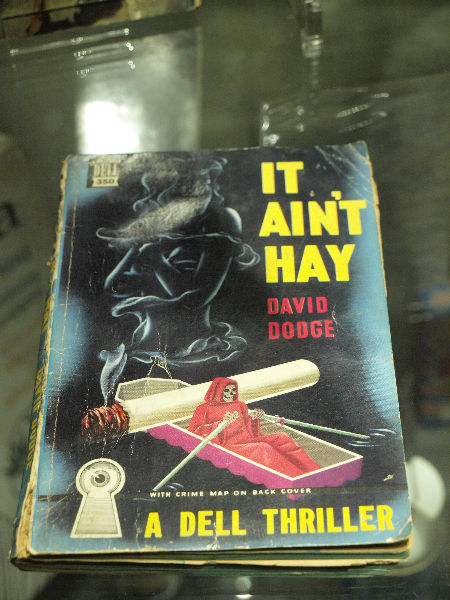 And we paid a visit to the Red-light district (although not to this particular venue!) 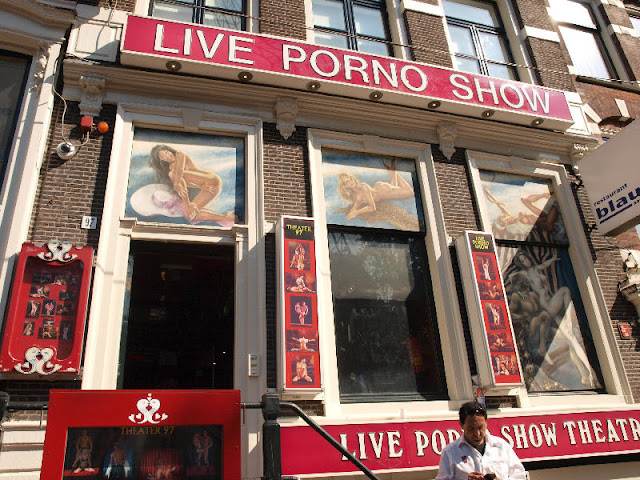 Hanging out at Ioannis' place 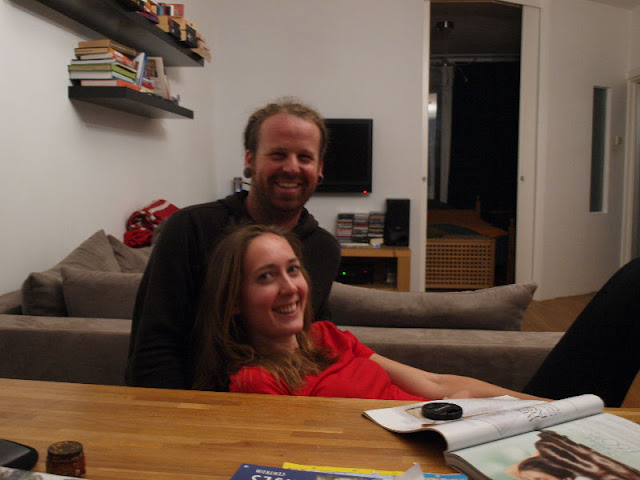