After Rome we headed straight for Tuscany where while searching for a place to camp my bike battery died. Two and a half years it lasted before it decided to call it quits. Not knowing initially if it was the battery that was the problem we thought it might have been the stator, especially as there had been no signs of the battery being on its way out. My bike had also had other electrical issues in the past so it was a fairly safe assumption we thought. The next night while camping out next to an abandoned old ski lift we tried putting a spare secondhand stator coil (that Sanne had got in Pakistan when her coil died) in my bike and hoped that that would solve the problem. It didn’t. The next morning when I tried to bump start it there was no sign of life. The spare stator obviously was not worth carrying as a spare after all. I then put my old one back in thinking that it might be the starter motor. It wasn’t until the next night when we camped at Lago di Garda that we tried swapping our batteries over. Luckily, it fired into life! Still suspicious that it wasn't just the battery I had no other choice but to just believe it was. The problem was it was now a Saturday and I had to bump start the bike for a couple more days until we could  find a bike store that would be open to purchase a new battery.

Our time at the lake was short but enjoyable. The weather was great and after setting up camp in another campground we headed down to the lake for a swim. It was our first swim since we have returned Europe. The temperature was great and the swim was much needed. The landscape surrounding the lake was incredible and we didn't really notice the full extent of it until we left the following day. Like always we were not the only ones on the road and it was slow going and everybody seemed to be headed for home after a weekend in the sun. We took the minor roads as usual and missed the worst of the traffic. Our destination was the Dolomites - our favourite destination in Europe. We were just hoping that we would be more lucky with the weather this time round after being caught in the snow a few weeks earlier back in Austria. Well we were not so lucky! After having camped at Passo di Valparola we awoke to a complete white out and with more snow than we had in Austria. Luckily this time round our tent had not become flooded from all the rain prior to the snow. At first we did not even realise that it had been snowing, as the few hours leading up to daylight we had been in one of the biggest thunder storms I have ever heard and when you are high up in the mountains the echoes of thunder seem to reverberate off all the surrounding mountains.

It was very hard to get motivated to hop up and pack up our tent, but the decision to go check into a local bed and breakfast made it easier. The idea of a hot shower and warm bed was very appealing. We made our way down the mountain slowly after the struggle of bump starting the bike in the snow and once we were back down to 1500m above seal level the snow had turned to rain. Luckily we were only 10kms from the nearest village. We sought out the same B&B as we visited last year in this village called La Villa which was not too expensive and which served up a great breakfast. The owner remembered us, last time we had come in the evening trying to find a room as it had been pouring with rain, this time now retreating from the snow. She was a great host and allowed us to unpack all our wet and snowed covered gear in their ski room to dry.

The following day we were going to head north but the owner of the B&B advised us against it if we did not want to ride and camp in any more rain. So west it was going to be. We were off later than usual but the plan was to find a new battery for my bike. Luckily in the next major town we scored ourselves a battery and after an hour of charging it was fitted and we were good to go. We were off to check out some lakes but arriving late in the region around Bolzano we just went about finding a bush camp and found one easy enough. With the bikes needing some TLC we decided it was time to just head north from here to Amsterdam. We have a friend we made last year in Greece who helped us out with the bikes and since they have another workshop in The Netherlands it was time to go get the babies sorted out.

So the journey headed north west to make our way through the Black Forest in Germany. We were happy that the weather was holding out for us, but now we had a new problem: Sanne's rear wheel was giving her problems. At first we thought it was the rear wheel bearings but it wasn't until we took the wheel off that we noticed that all the spokes had come loose and the wheel was ready to collapse. Only a week earlier we had gone over the bikes and noticed a few loose spokes so without a spoke tightener we thought we could make it the Amsterdam and sort it out there. This was not to be the case. Luckily we found a workshop nearby and the guys fitted us straight in, even at five in the evening. In no time at all the wheel was back on and we were on our way. With the weather looking a little ordinary we opted to stay in town at the local campground.

While here we managed to contact friends we have in Luxembourg and hoped they would be home as this was to be our next stop after the Black Forest. We received an email the following day with the message we were more than welcome. So, with spirits high and the knowledge that a bed was coming our way we headed off through the Black Forest, stopping off in Triberg, the origin of the Black Forest cake. So of course we stopped by to sample some and it was pretty damn tasty. We checked out a few of the local stores that are known for their cuckoo clocks. The designs and the craftsmanship is incredible, not my taste in furnishings but I can  appreciate it for the intricate work that goes into them. That night we found ourselves a spot to camp only to be over run by midgies and found ourselves escaping into the tent to get away from the constant onslaught. With clear skies that night we hoped for the same for the following day's ride into Luxembourg. This was so not to be the case. We awoke in a cloud being at just over 1000m above sea level and the heavens had well and truly opened with full fury upon us. Oh the hell, we were struggling to find the motivation again to get packed and the only thing driving us was the fact that we had a warm dry bed to go to. When we managed to get packed and get on the road it was like a computer game, vision was poor and the only way I managed to stay on the road was by following Sanne's tail lights and at just 10m behind her I was struggling to even see those. As the day progressed on and we dropped in altitude we finally left the rain behind and had reasonable weather to make our way in to Luxembourg. Oh the joy.

Back camping in the bush, where my battery died 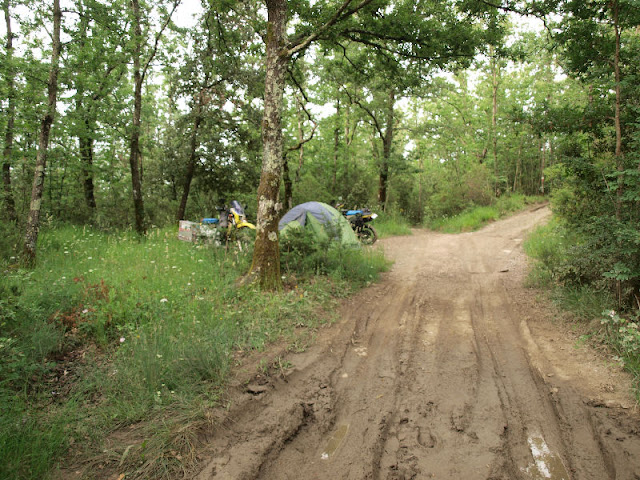 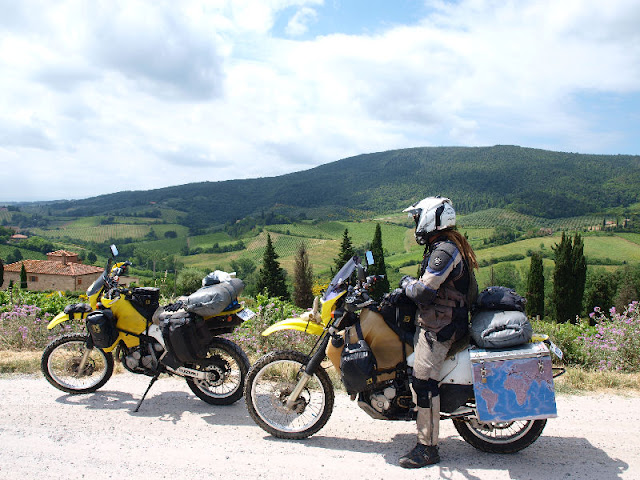 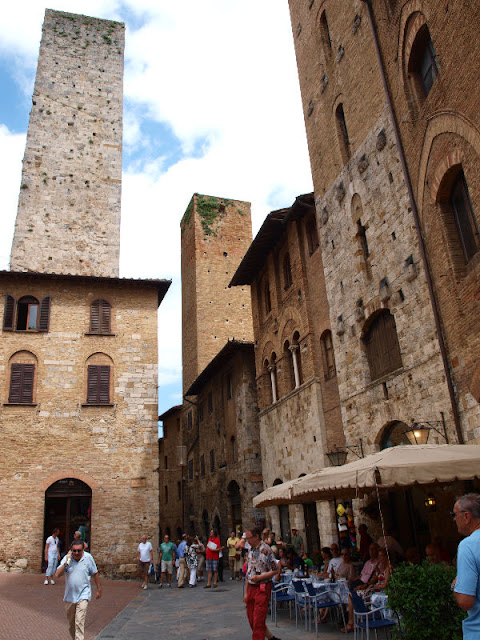 Working on the bike, this time swapping out the coil 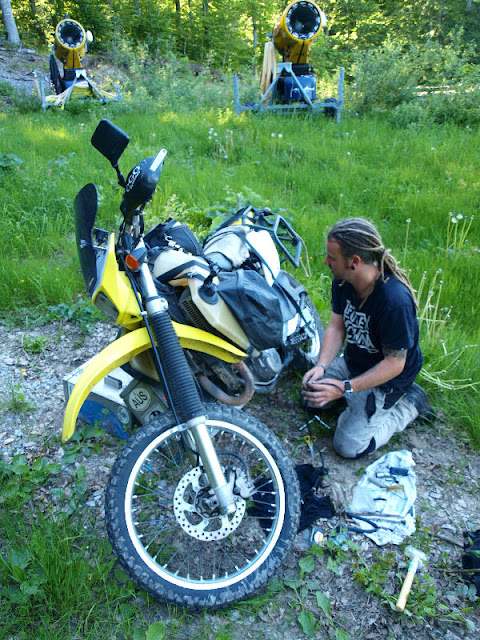 The irony of snow makers in the background would only come to fruition in only a few days! 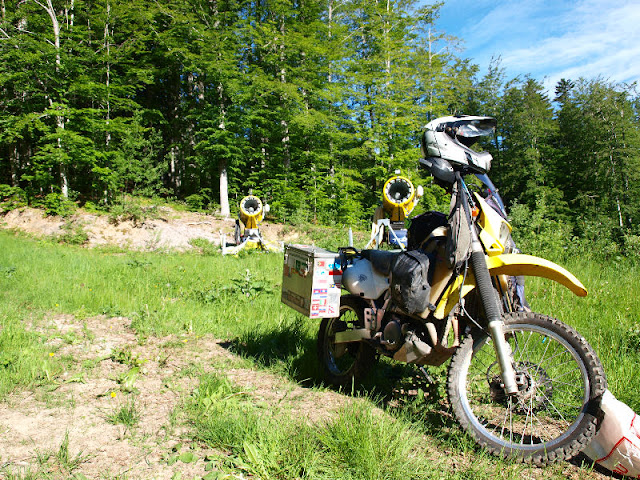 Swapping over the batteries 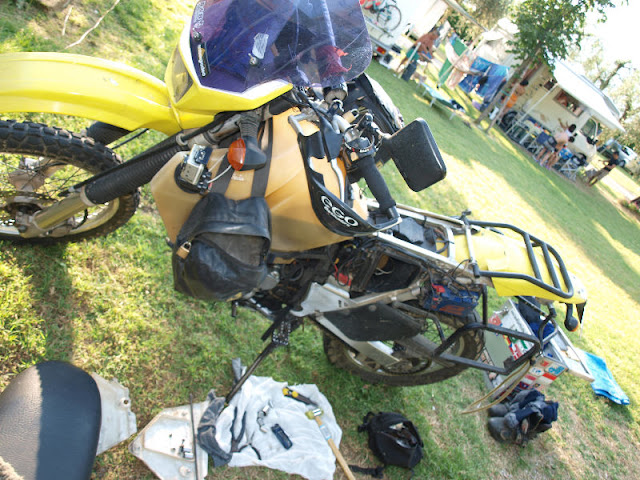 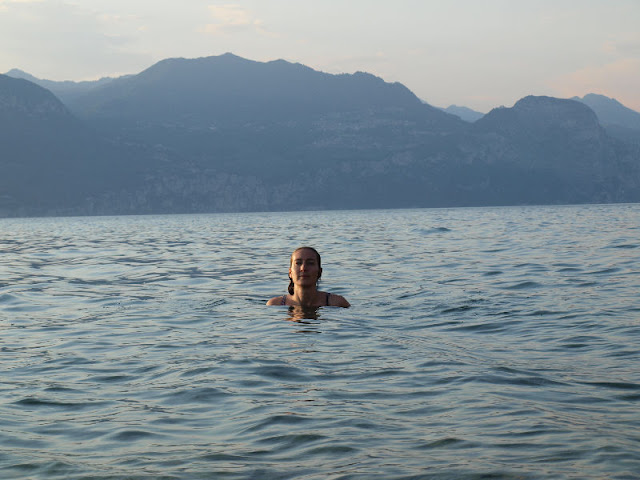 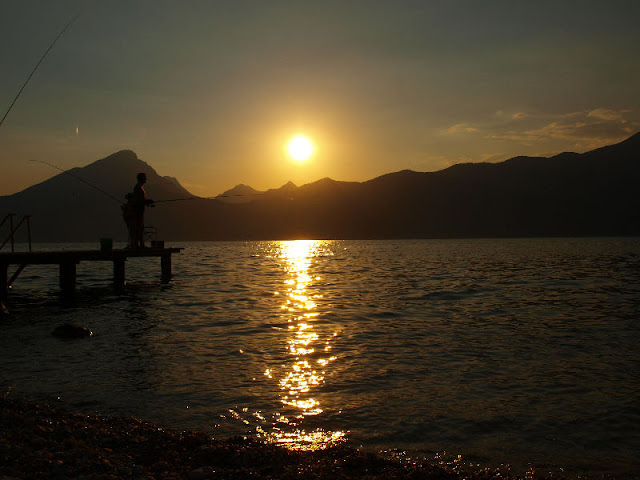 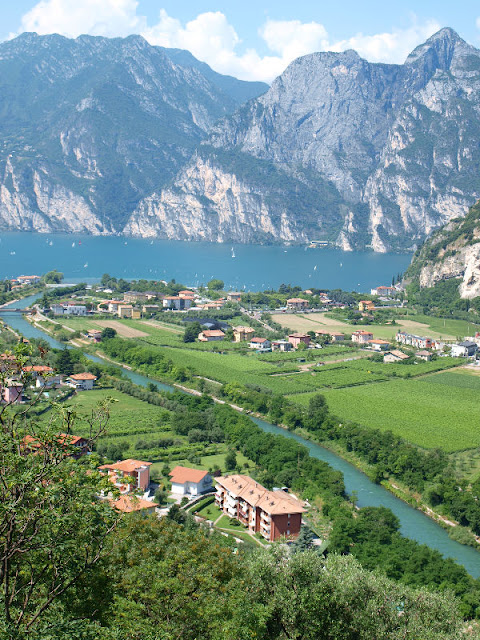 Sanne happy to be back in the Dolomites 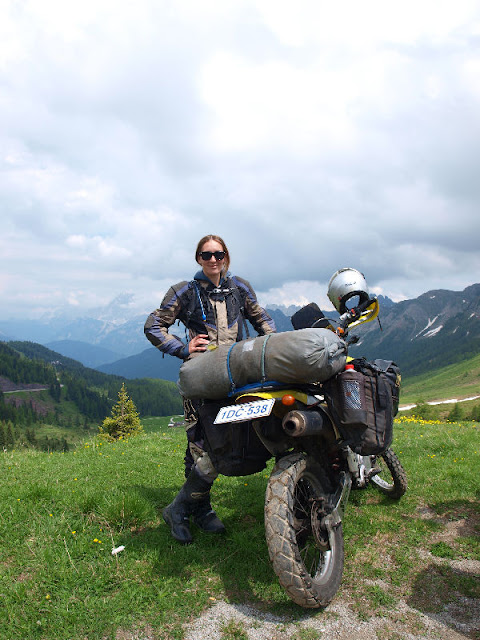 A cool looking carving we found on Passo di Falzarego 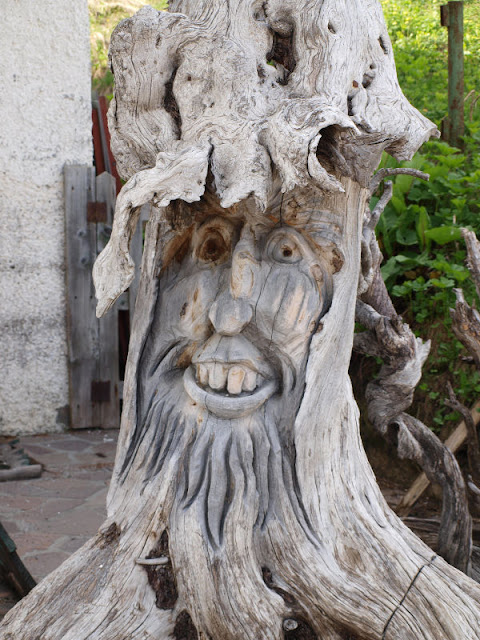 The hellish weather we awoke to the following morning 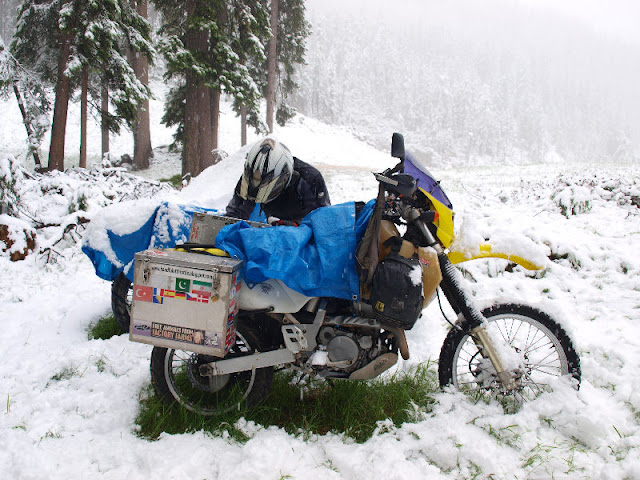 Not much fun having to pack up in this 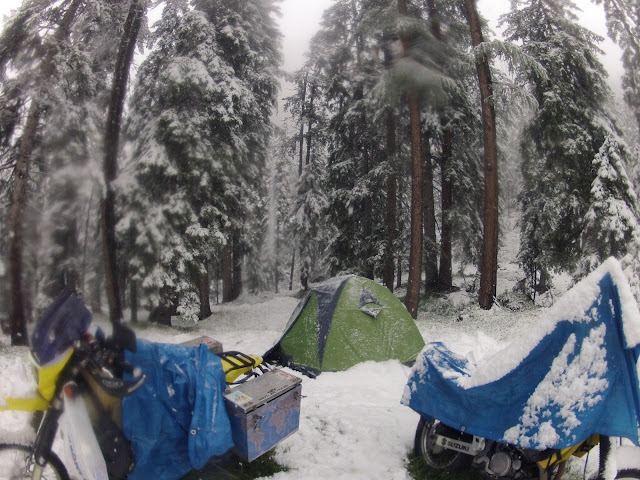 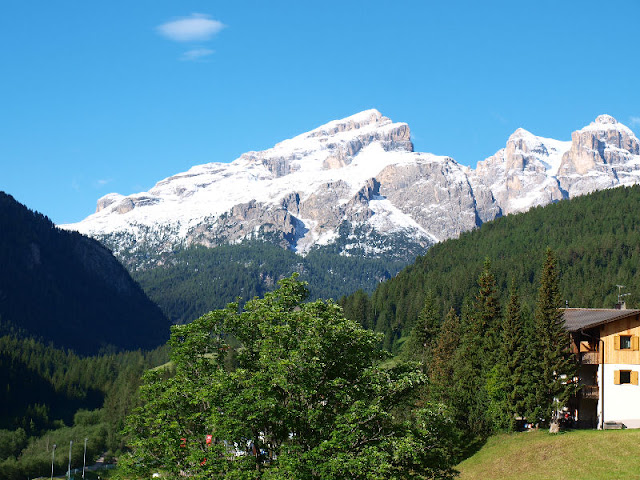 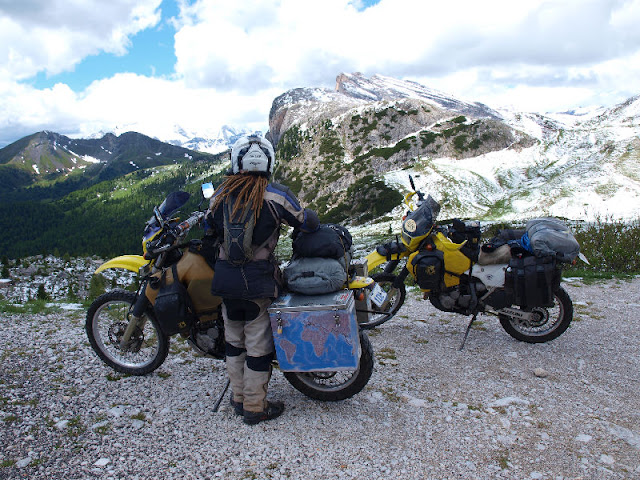 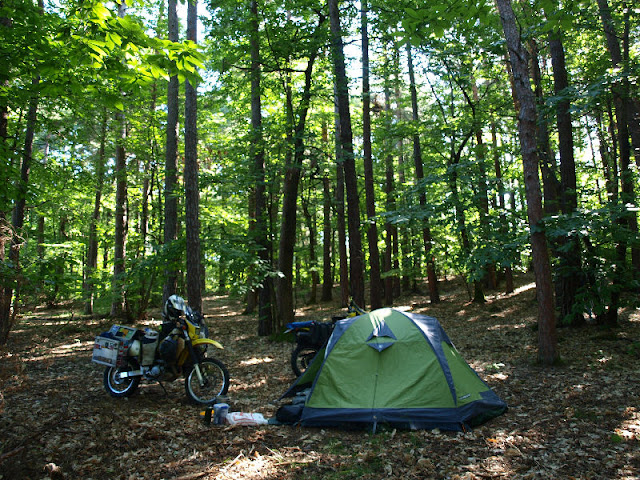 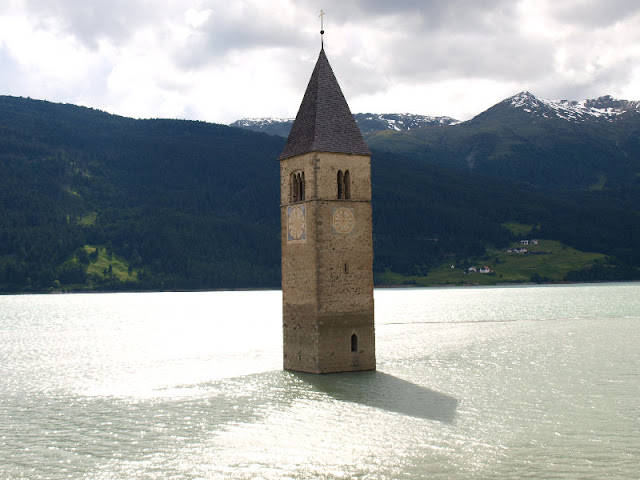 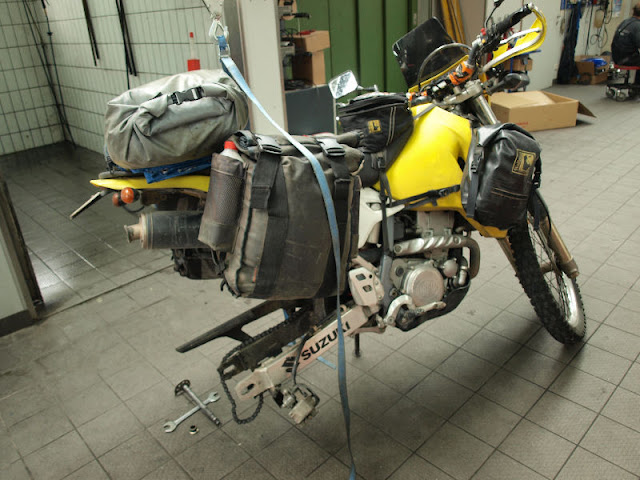 This guy was a champ at rebuilding rims and he was fast! 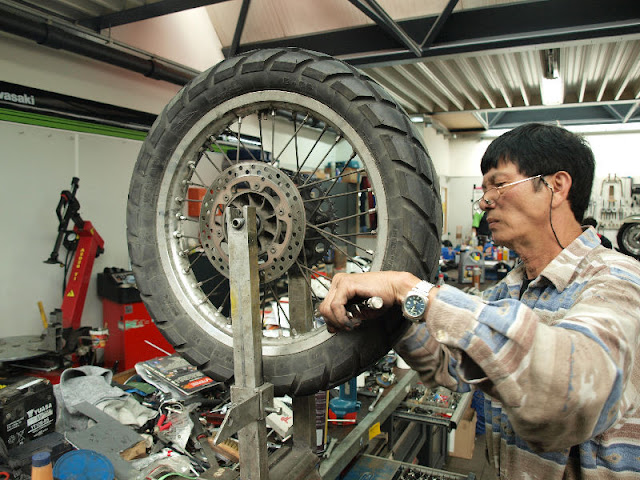 Somewhere in the Black Forest, Germany 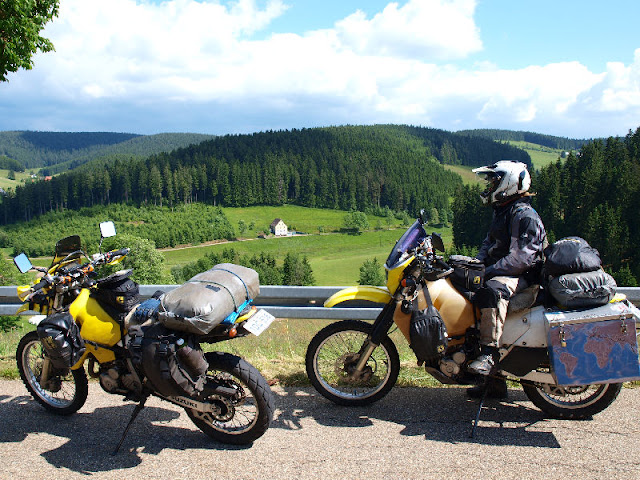 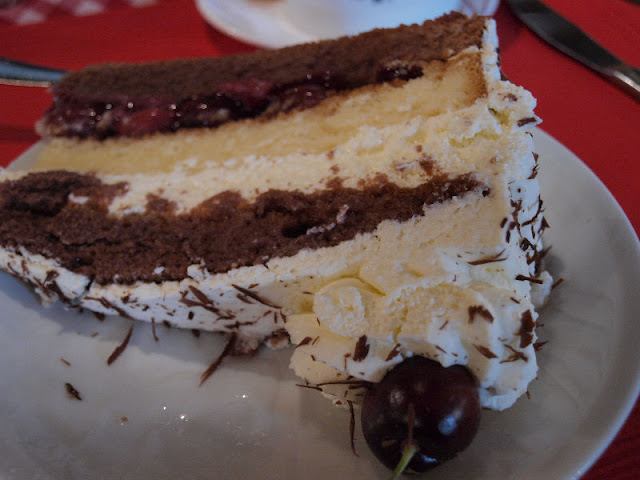 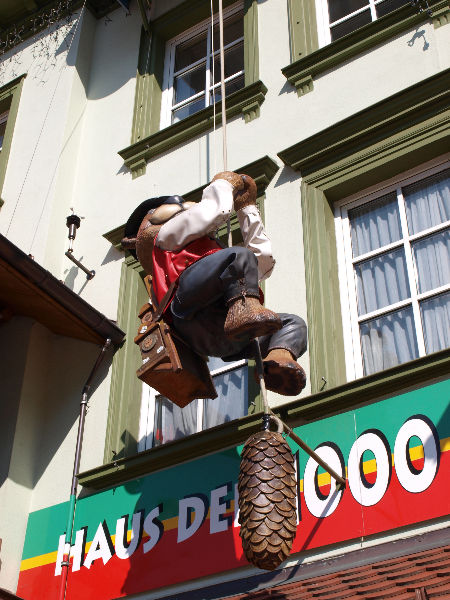 Our last night camping in the Black Forest.
Sadly the weather was not even close to this the following morning 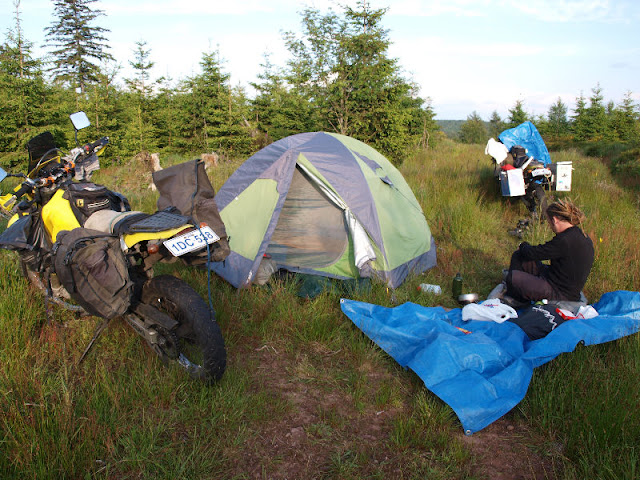