We arrived in Leeds a week earlier then originally intended. The reason being, our so called pre-planning of crates had fallen through. I don't know if it was down to my misunderstanding but there was no longer any metal crates waiting for us.

We stayed with an old work colleague and his wife whom I used to work with back in Perth. Pete was very helpful in giving me a map to do a run around of all the local motorcycle dealerships to try and sort ourselves some crates. Our timing seemed to be out as with each store we would be told, "if you were here yesterday or a few days ago I could have helped you out", the worst one was: "yeah I had plenty but the scrap metal guys just took them away 10 minutes ago"(!) so with a quick race to the scrap metal yard we received more bad news: "sorry mate they have been crushed already"... With our spirits in fast decline we moved from one bike store after another. Our last store was the local BMW store and luckily we finally came up trumps here with the owner offering us two BMW timber crates. Now the next problem - how the hell were we going to get them back to Pete's?

Pete being a local had a few contacts and that afternoon, his mate Glen stopped by in his transit van to take us to the BMW store. This was only after another frustrating call to our freighting company Russels Freight. The young girl who had been helping us along the way forgot to give us one vital piece of information. One must pay for the shipment before being dropped off at the depot. This then in turn gave us a problem, they would not except cash on delivery and a money transfer was all they would take. Not being able to clear the funds through our Australian bank account within 24 hours and coming into a long weekend we had no other choice to shoot off to the bank the following morning to transfer the money.

The guys at the bike store were very helpful and we got 2 used timber crates for free. Later that afternoon I got started on changing the tyres. With less then 24 hrs to go before the bikes were to be delivered I only then realised the amount of work I had in front of me. It did not help that I was given more work to do when I removed the rear tyres. It was hellish to even break the bead where Pete and I had a system of one of us using the bike's weight to break the bead using the sidestand. The problem was that last year we had our tyres changed in Istanbul, I have no idea what they used to get the tyres on the rims but there was a hard glue residue left behind which I had to sand off before replacing our new tyres. Just what I needed. Word of advise: Do not go to KTM in Istanbul!

The next morning I was up early to change the last tyre, service the 2 bikes and also wash them before crating them. The crating was also not going to be straight forward as I had to customise the crates. The smaller the crates the less we pay. So after all the other fun stuff (cleaning, servicing etc) Sanne and I got started. Trying to do it all by ourselves was not easy. I realised we might not get it done for the close of business. With one crate almost done and the time being 4pm we were struggling. Pete was home and now able to help me out thankfully. His son Richard also gave us a helping hand and we managed to knock out the second crate in record time. There was still one more thing to do - PACK! There was just not enough hours in this day for my liking. Sanne helped out and packed my things for me. It was getting on but some how with the help of Glen showing up just in time we made it to the airport with just 15 minutes spare.

With a bit of sweet talking from Pete to the forklift driver, old mate pulled the bikes out of the van in a jiffy. All of us were not looking forward to carrying them out after the effort that went to getting them in the van. The bikes came straight out of the van and straight onto the truck headed for London (Heathrow) via Manchester. It wasn't until this point that I had very mixed feelings on everything. Did I forget something? Are we doing the right thing? Just seeing those bikes on the truck was awkward and there was a feeling of missing them already welling up inside. We have both become so attached to our bikes and they have brought us so far. With still a big journey ahead of us we hope our babies arrive safe and sound in Buenos Aires early in September.

I would like to put a big thank you out to all those who helped us out, Steve from BMW for the crates, Glen for the use of his van and of course to Pete and Richard. By the way Pete, thanks for the motivation while I was lagging behind and dragging my feet while trying to crate the bikes. Putting the nail gun to my head was just what I needed to work faster!

The following day we had time to reflect and sit back and take everything in. It still felt like we had missed something with the crating and packing of the bikes but only time will tell on that. We managed to enjoy the day though with Pete and Jenny taking us around town to pick up a few last supplies that we needed before heading back to London to chill out with Carlos and Ellenice before our flight on the 3rd September.

Just changed one tyre, only 3 more to go! 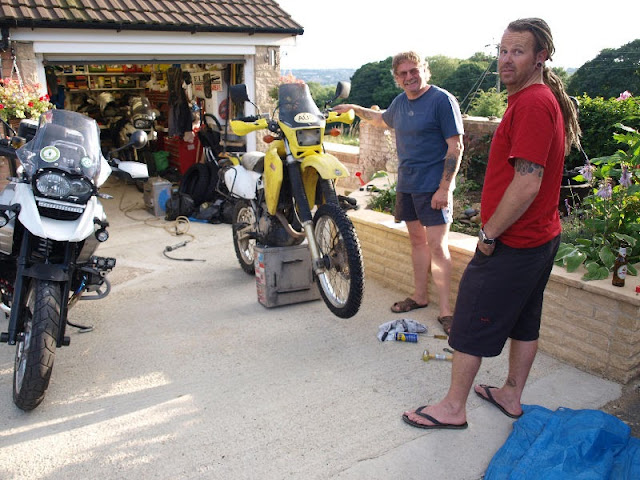 My most hated job of all, changing rear tyres 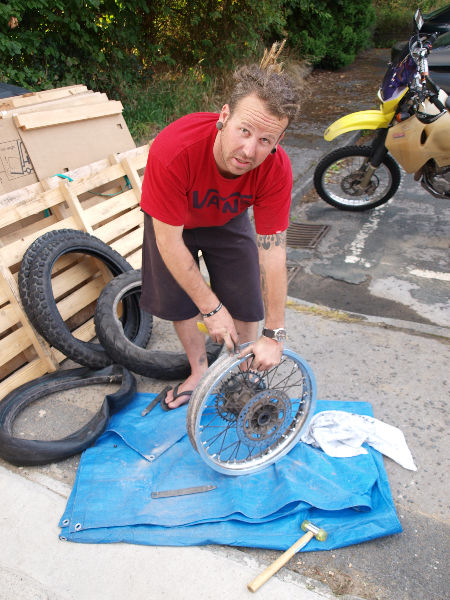 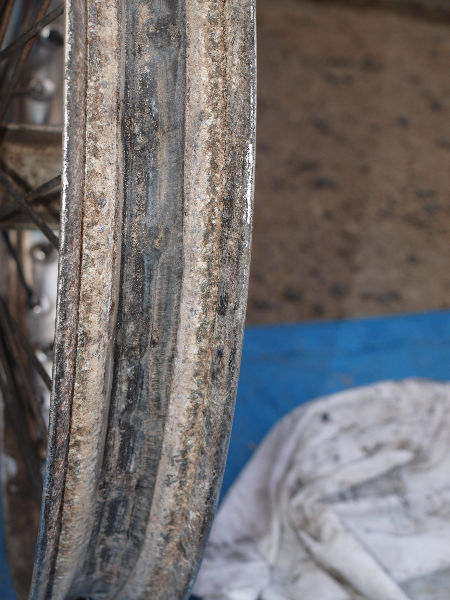 Part way there on the crate building 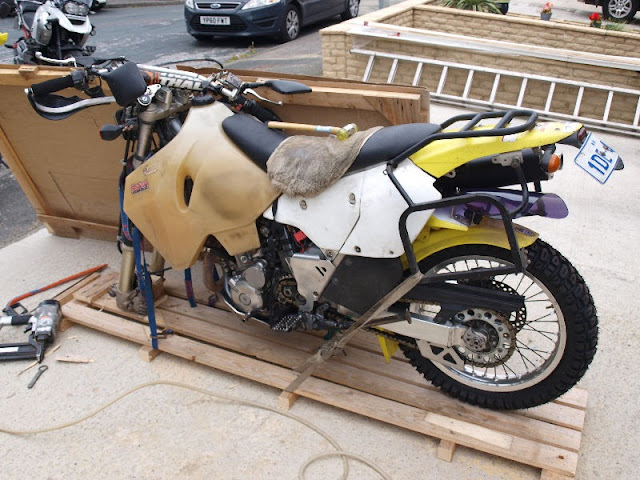 One down one to go 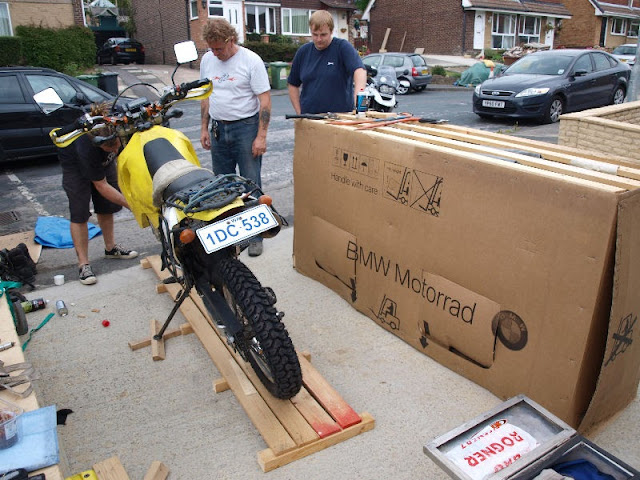 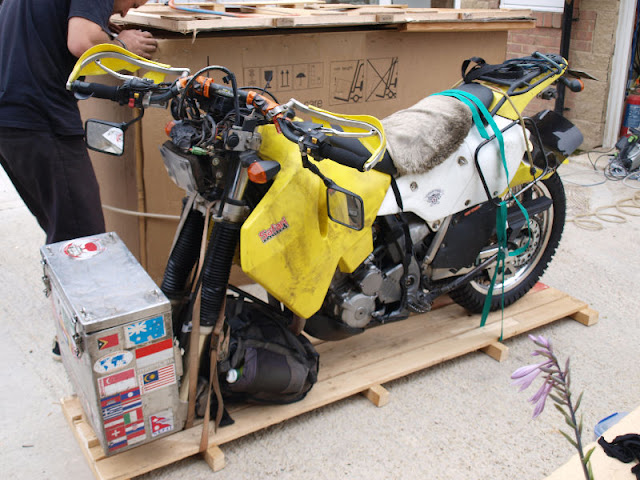 Pete was going to great lengths to keep me working hard! 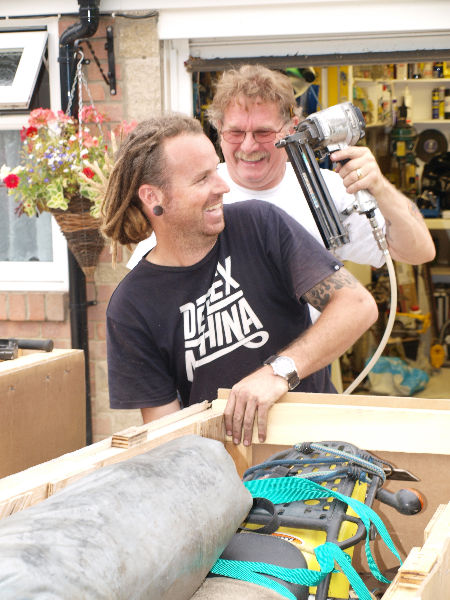 Sanne with the bikes crated just before sending them off 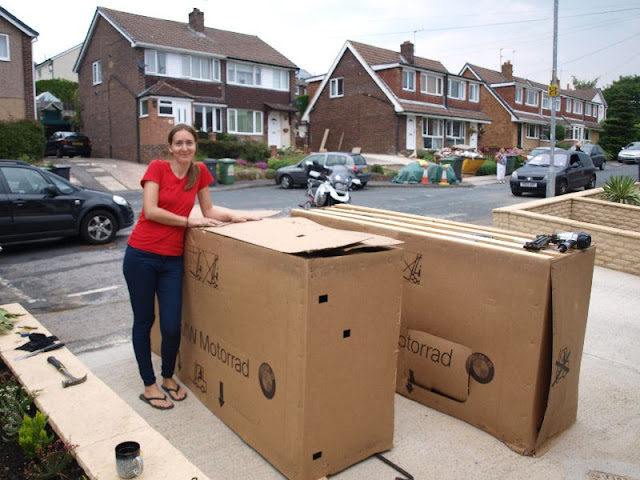 The hard part, lifting them into the van 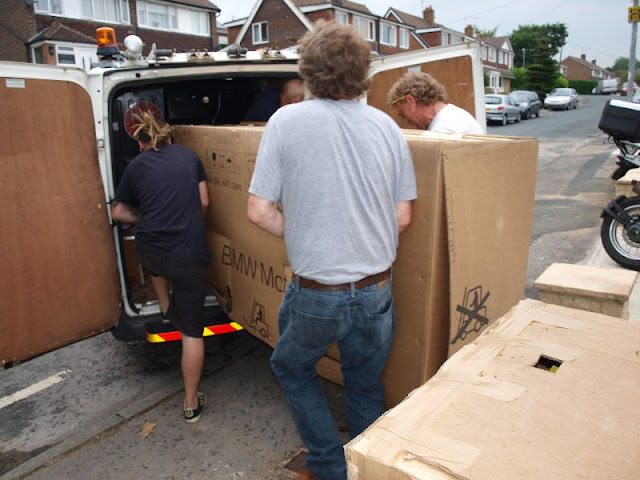 The lovely view from Pete and Jenny's backyard 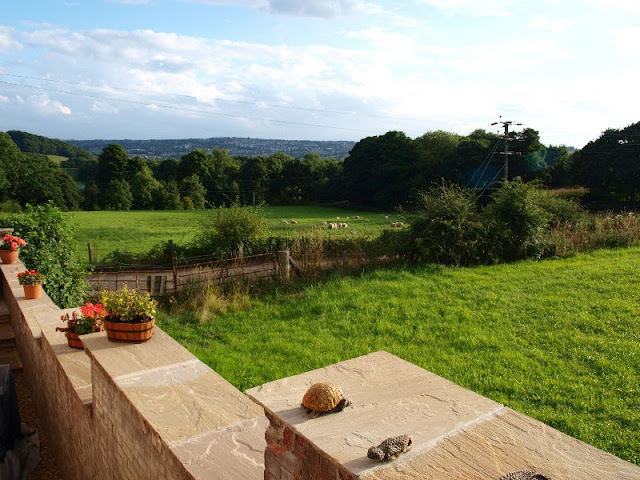 Pete, Jenny and ourselves 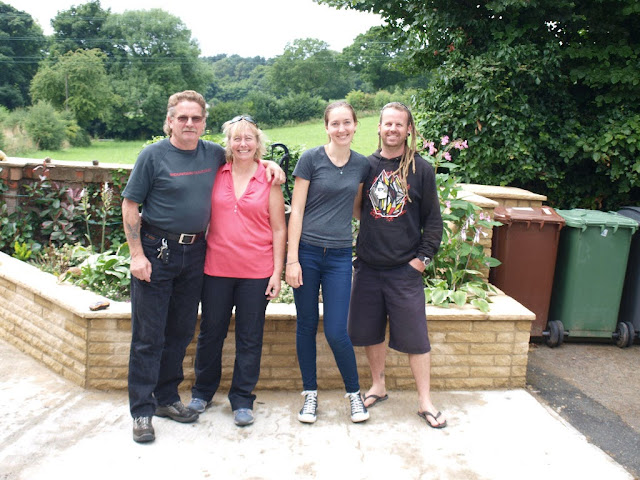