Cascavel is by no means a tourist town but with the chance to stay with some more locals we jumped at the chance to do so. Cascavel is a small city only about a 2 hour ride north of Foz Do Iguacu.

Our host with the most was Sandro, his wife Andrea and their cute young daughter Valentina. Where do I even start when it comes to talking about this family?! OK, firstly Sandro loves hosting fellow motorcycle riders to the point that he has even built a room and bathroom in his backyard to accommodate fellow riders. Not just a little room but a large room with 4 beds and an ensuite! The centre piece being a large king size bed which was divine. Sanne and I struggled every morning to get out of bed as it has to be by far the most comfortable bed we have ever slept in, and we have slept in many beds by now.

Our first meeting with Sandro was when he was kind enough to meet us on the outskirts of town and escort us into the city. He knew our Portuguese was terrible (read non-existent) so he brought along his sister Ana to translate for us. We originally missed one another on the road, but the next thing we knew some mad man in a car swerves into the lane in front of us and starts waving at us to follow him. This was not the first time this had happened so at first we were just going to ignore him and keep going until he pulled up on the side of the road and jumped out of his car. A sigh of relief when I saw his face, I recognised who it was. After a quick introduction we were told to follow them and so we did. We found ourselves weaving in and out of the traffic into the city where we pulled up outside a beautiful looking restaurant. We were invited in even though we were in our dirty smelly riding gear where we met more of Sandro’s family. His parents run the restaurant and we were invited to have lunch, score!

Over the next few days we came to know this restaurant well, along with Ana'a restaurant just down the road. They both run Italian restaurants and oh boy was the food good! I think we put on some weight again after loosing some in the first few weeks of being in South America. Trying to adjust to the new cuisine has been a learning curve, they love their meat just like the rest of the world!. We moved between the two restaurants for lunch and dinners enjoying our new friends' company over good food and beers. They catered very well for us being vegetarian.

Sandro showed us around town and one particular day we headed out to Zeca's farm, also fellow Brazilian rider. He owns and runs a 800 hectare property on the outskirts of the city. He invited us out for breakfast one morning and to check out what he does as it is meant to be a well run property that many other farmers visit and replicate the way it is run and managed, including a few Aussie farmers! Lucky for us, Sandro has many contacts, one just happened to be Mayra's (Zeca's daughter) boss. He got her out of work for the day to be our translator! So with this being done we hit the city to see the sights. We hooned from one place to the next, checking out the local cemetery with its large house-like buildings for caskets, to the man made lake where we got up close to the Capybaras then onto the local park where there are many animals in cages, like a zoo but free and sadly for the animals not a lot of space. There was a lion, tiger, jaguar and a puma, each in their own tiny space with no interaction to any other animals or the chance for any exercise or to at least live some sort of normal existence. We went away feeling a little down, we both don't like zoo's. Animals belong in the wild, not in cages!

While we were in town we ran into a local online news crew that asked us if we would like to be interviewed. The following day we were back at Sandro's restaurant for an interview with them along with the local newspaper. The idea of another great meal was incentive enough to do the interviews. Who doesn't want to be in the local rag though! We had a lot of fun doing the interviews, getting many looks from the patrons as they went about eating their lunch. Next thing we found ourselves riding up and down the street for the online interview. Many more looks from the locals wondering who these apparent celebs were! Even the local neighbourhood bum came over to high-five and fist-bump us. All in all it was a fun day, we got our 15 minutes of fame and laughed immensely when we saw the finished interview online. You can check the newspaper interview out here and go to page 10 (if it doesn't work click here) and our online interview here. Love the Motorhead music at the start, we didn't even get the chance to tell them what we listen to.

Our last night was enjoyed with Sandro, his wife and young daughter. The last few days had been filled with so much that it was great to just sit back with a home cooked meal. On reflection, this was one of those stops offs on our trip that we will never forget. It is not always about what you see and where you are that makes travel feel so special to us. This time it was all about the people, a chance meeting to stay with some complete strangers who have a heart of gold and some of the greatest generosity that we have come across to date.
Farewell to all our great new friends, we don't want to say goodbye as we hope to see you all again in the future. 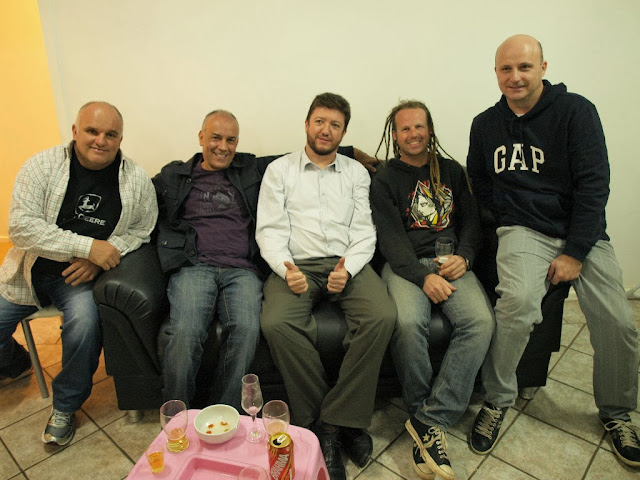 Sandro's sister Ana and of course Sanne and I 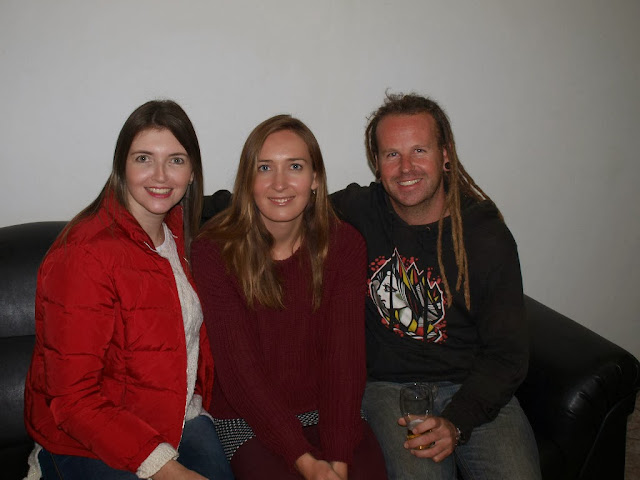 Dinner with our new friends 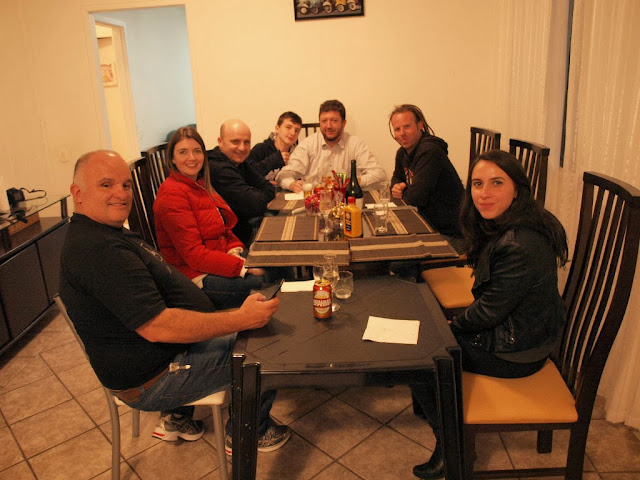 Who would have thought, a blue heeler in Brasil 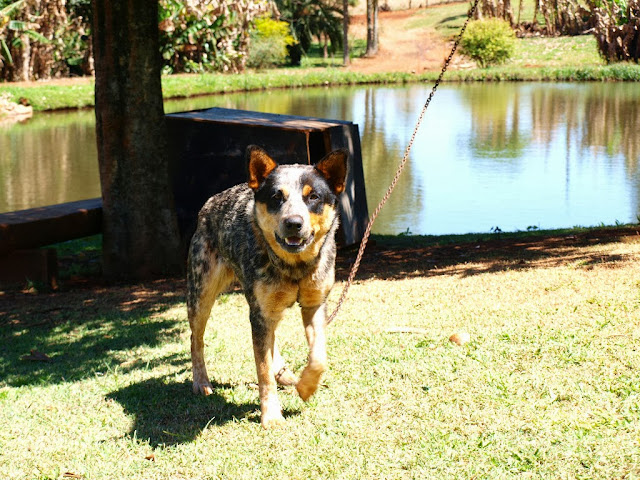 Mayra, Zeca, Sandro and ourselves 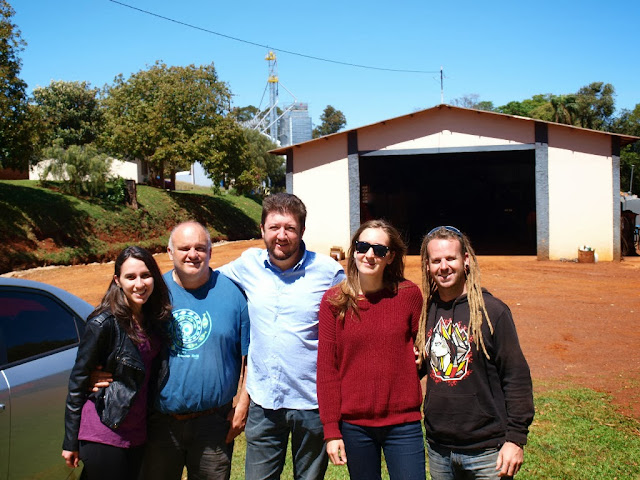 Zeca's family farm, there is actually 4 houses hiding down between that natural bush land 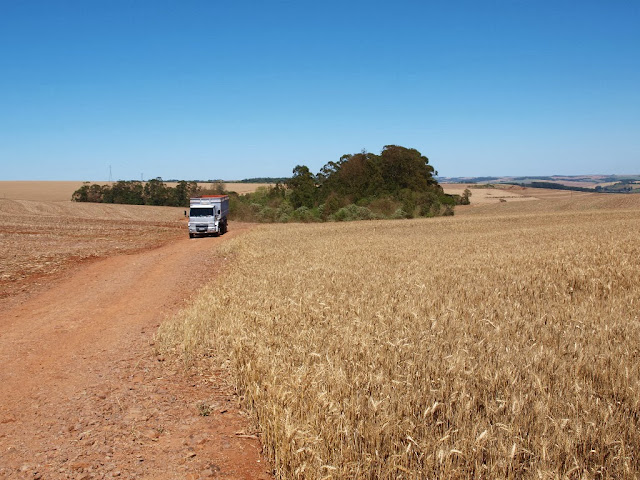 Looking over the city skyline of Cascavel from the farm 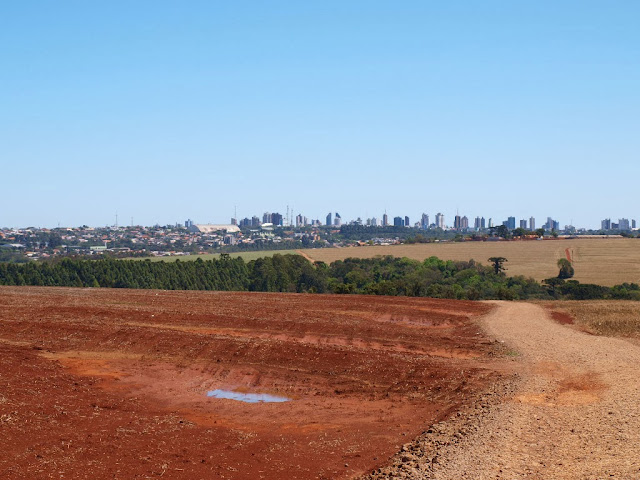 Believe it or not but this is a cemetry, and one of many 'homes' for caskets 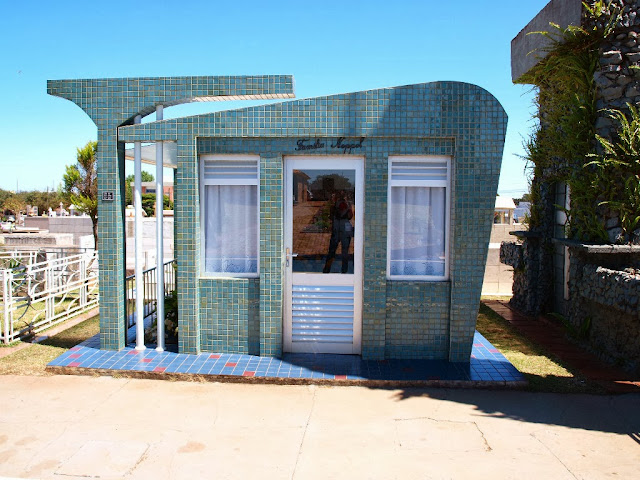 This one is a father who had to bury his daughter, he is a sculptor and built this himself 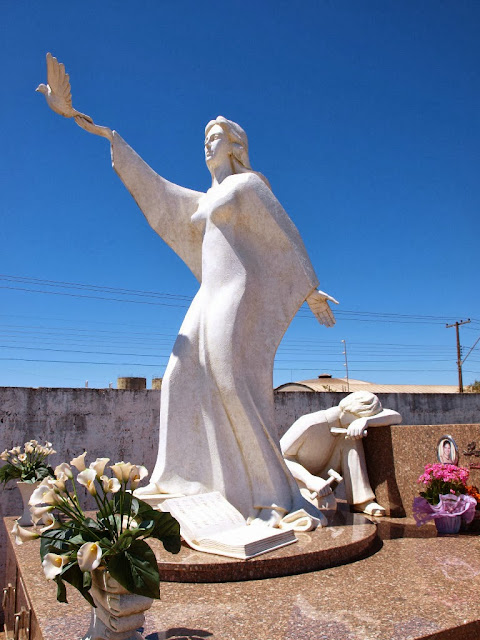 Cascavel Cathedral, not your classic style of architecture for a catholic church 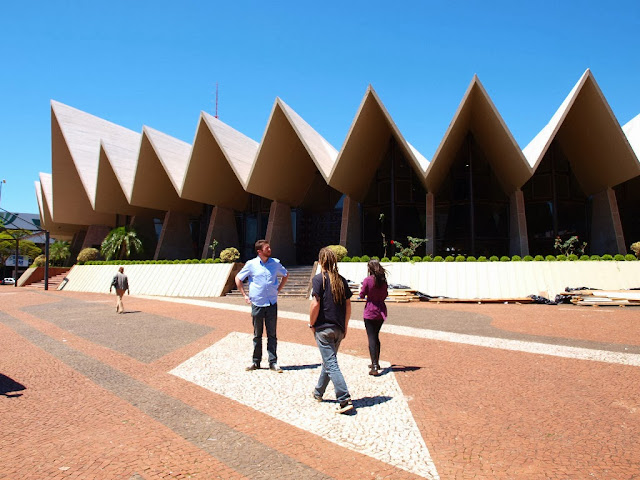 We finally got up close to the local fauna,
this funny looking guy is a Capybara - the largest rodent in the world 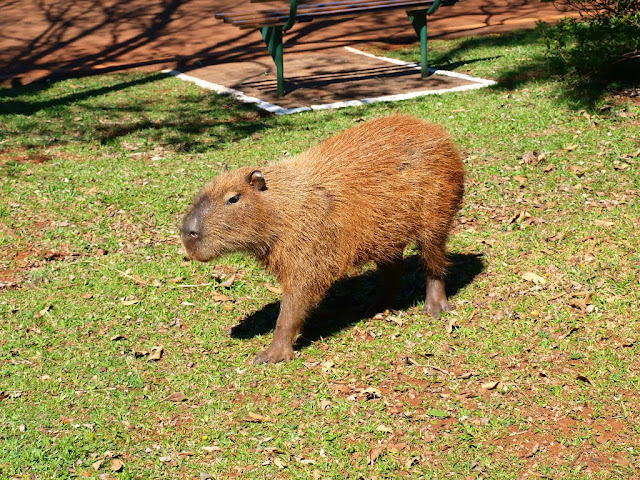 This was taken after our newspaper interview with Chislaine, the reporter in the middle 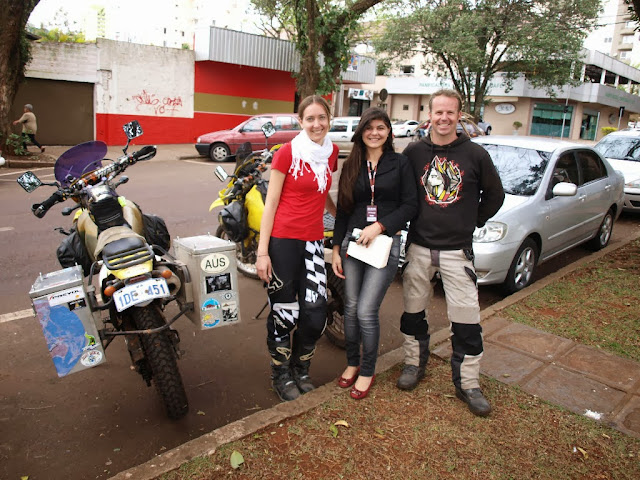 This shot was taken during our online news interview 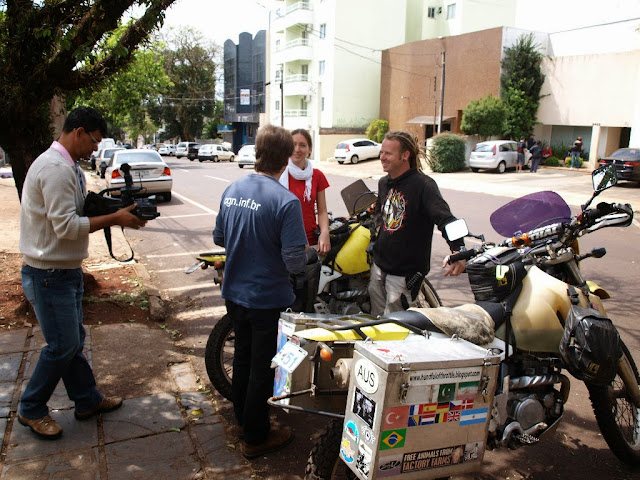 Me, Sandro and his mum outside of their restaurant Santa Felicidade 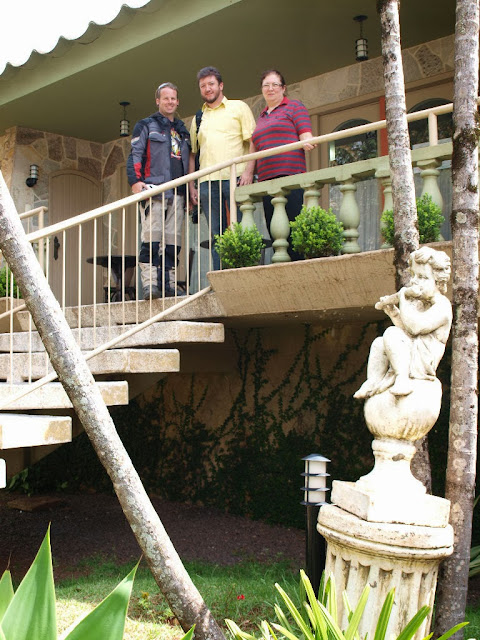