We arrived on the outskirts of the city of Dourados with storm clouds looming above us, the sky threatening to open any second. We pulled up at the front of a roadside cafe where we were meeting up with our third installment of bikers from Brazil Riders. Thanks to Sandro from Cascavel we now have so many places to stay with bikers on our route around Brazil. We even have offers from places in Brazil that we are not even going to! So anyway, we sat down and waited for them to arrive. In the meantime some other biker struck up a conversation with us, well attempted to shall we say. We have pretty much given up trying to learn Portuguese, it is like one of the hardest languages I have come across! But luckily it seems most people we meet here speak a bit of Spanish so we try to get by with that. Thing is, although they might be able to understand my terrible Spanish, I have troubles understanding their Spanish with a Portuguese accent. But we get by!

Julio, Marisa, Nari and Claudette finally arrived and they told us that they were going to escort us to a hotel, which at first confused us a little as we thought we were going to be staying with them in their house. We were worried they were going to take us to a really expensive hotel that we couldn't afford and that we would have to try to explain to them that we don't have much money. They had mentioned something to us that we were now 'their responsibility' but were unsure as what was meant by that! When we turned up at the hotel we realised that the hotel room had already been booked and paid for by them. That was their gift to us! Humbled we did try to offer them money but they wouldn't accept it. They left us there saying they would come and pick us up in a couple of hours to go out for dinner. They took us out to a fancy Italian restaurant (Brazilians have a love affair with Italian food it seems) that we would have never been able to afford ourselves. My glass did not have the chance to get empty the entire night, as more beers were arriving in a steady stream. Thankfully Claudette was able to speak a bit of English and with her English, my Spanish (or Spanglish as I prefer to call it) and throw in a little bit of Google Translate, well we actually managed to make sense of what each other was saying.

Next morning we heard a knock on our door, it was Claudette who informed us to get ready as they were going to ride with us to Guia Lopes da Laguna, where we also had a contact to stay with. All six of us rode out of town, but only after we filled up our petrol tanks which they paid for!! We rode to the border town of Ponta Pora on the border with Paraguay where loads of Brazilians go to shop for big discounts on imported goods. We had lunch here and went to have a look at the goods as there was a motorbike accessories section too and I was in dire need of a new pair of gloves as my old ones by now were being held together with sticky tape to close up the holes in them. I ended up finding exactly the same model glove which fit perfectly, wasn't really that cheap at US$60, would hate to think what they would cost without the duty-free discount (Brazil is known for ridiculously high import taxes).

We then set sails for Guia Lopes although I think the guys miscalculated the distance as it ended up being a 100kms or so more than expected. Which meant that the last hour we ended up doing something we always strive to avoid: riding in the dark. On the outskirts of town we were greeted by Rodrigo and his crew and after saying our goodbyes to Nari and Claudette who were going to ride the 250kms back to Dourados in the dark, Rodrigo told us they were also going to take us to a hotel. We didn't expect that we would get a hotel room paid for again...but that's what happened! Again we tried to explain that we couldn't possibly accept that but our objections were to no avail. Instead they continued to take us out to dinner and together with Julio and Marisa (who had decided to ride back to Dourados the next morning) and some of Rodrigo's friends which included Alex the history teacher, and our translators for the night: Sita and Sisa, mother and daughter and Americans living here for over 20 years. We all went to eat pizza at a nice little restaurant and had a really great evening. It was nice to speak English again with Sisa and Sita, especially for Mark who doesn't speak much Spanish, causing Julio to exclaim: "He speaks!" When the bill came they of course wouldn't let us pay for anything. We were really being treated like kings here!

The next morning Rodrigo picked us up from our hotel and took us to his school where he teaches Math. Here we were taken around to different classrooms where we did a bit of a Q&A session with Sisa from the previous night being the brilliant translator. It was a lot of fun and reminded us of a similar experience in Indonesia when we visited a school there. The kids here were really curious and seemingly very excited to have us at their school. Like in Indonesia, lots of photos were taken of us by all these little paparazzi's, making us feel very special... Rodrigo also took us to another school where he teaches and with loads of kids jammed into one classroom we had another Q&A session. One thing we have learnt is that no one really seem to like Funk around here. For those of you who don't know Funk is a dance which originated in the Favelas and is very raunchy. It's basically sex on the dance floor. Back in London when we went to a Brazilian party everybody seemed to dance Funk, but when you mention it here it's obvious it's looked upon with disdain. Look 'Baile Funk' up on YouTube and you'll see what I mean.

But all good things must come to an end and we had to say goodbye to our new friends in Guia Lopes, especially Rodrigo who we so wish we could have spent more time with. The kids here were wonderful and their imagination too. A perfect example: two kids on two separate occasions came up to me and pointed to my camelbak (which most people will know is a backpack holding a water bladder): "Parachute?". What a brilliant idea for a new motorcycle accessory, don't you think?

On a side note, the fuel in Brazil is really bad. And by bad I mean terrible. Our bikes have been spluttering and farting ever since we've been here. The reason being the high ethanol content (about 25%). As much as we want to see more of the country, at the same time we can' wait to get back to Argentina where fuel is both better and cheaper. I would be worried about the health of the bikes if we were to spend a long time here. 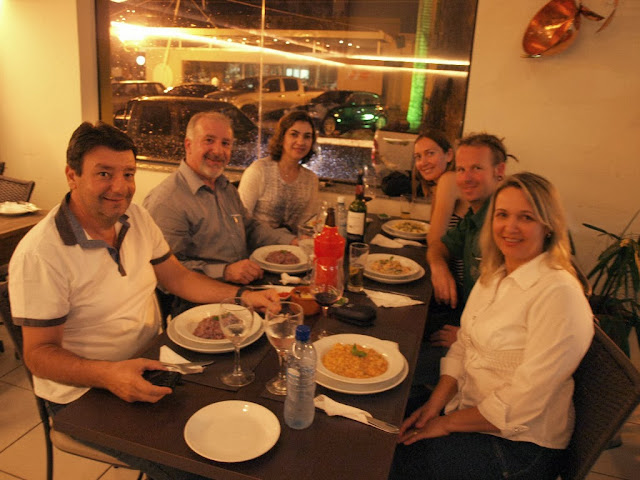 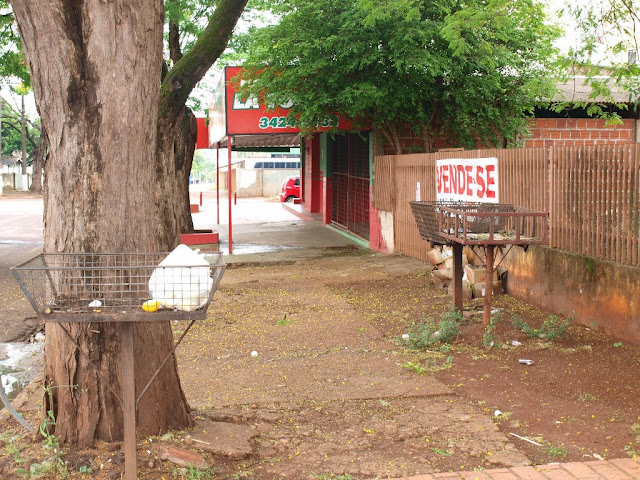 In the border town of Ponta Pora 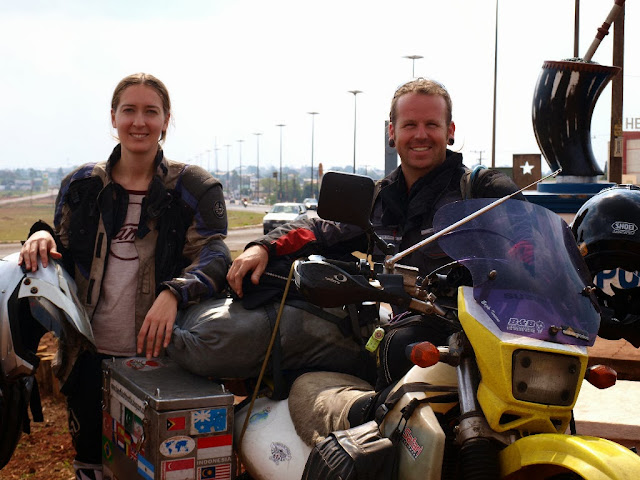 With our new friends in Guia Lopes 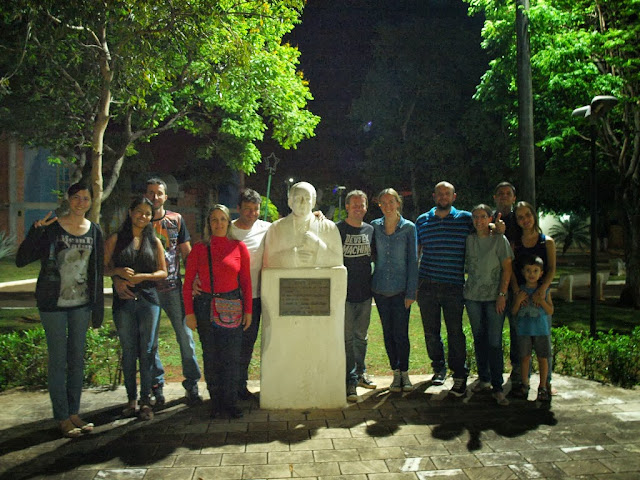 With the students at the school 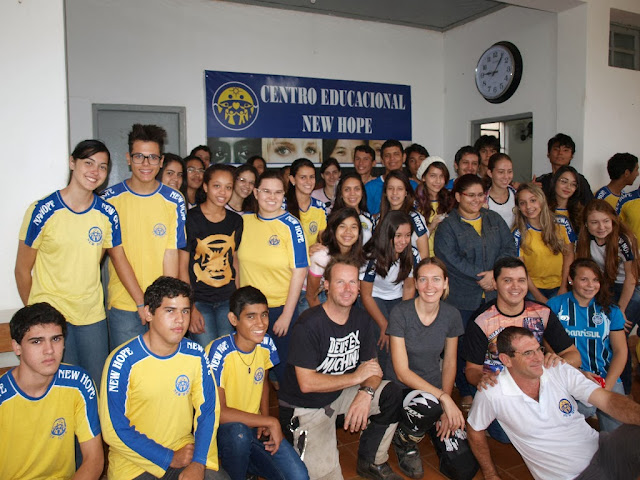 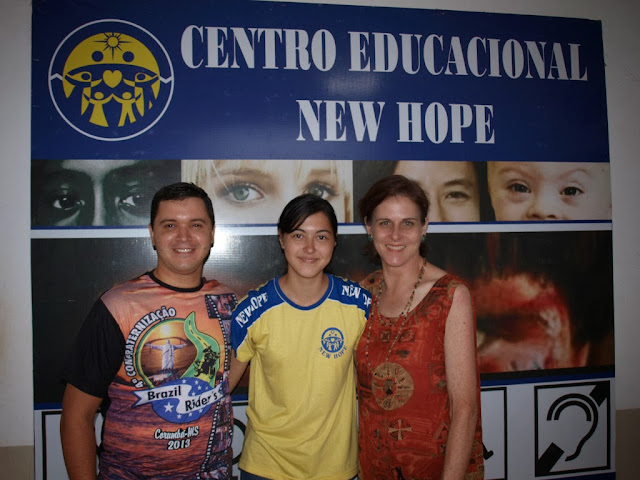 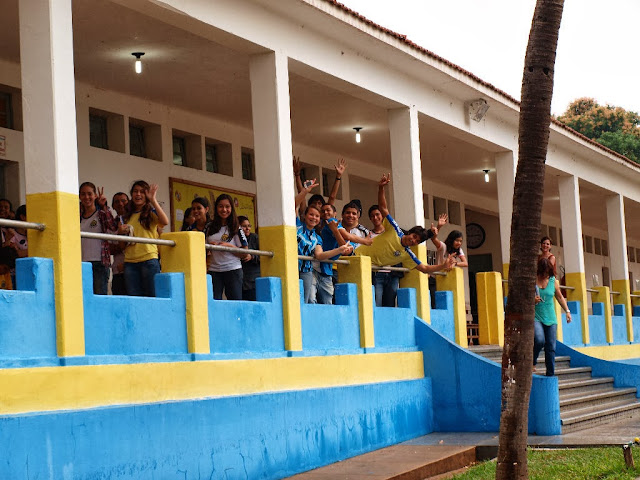 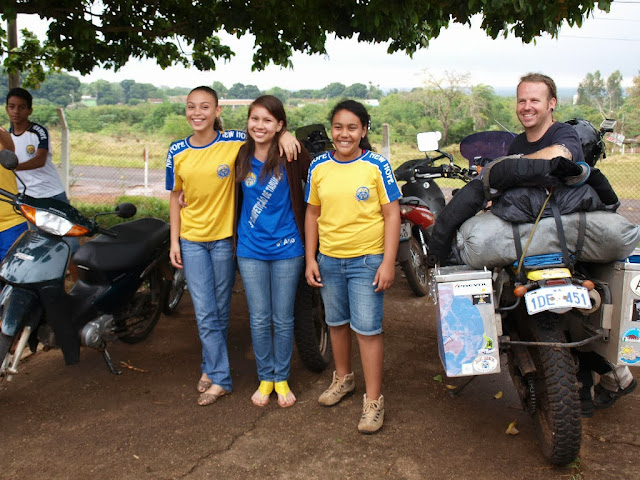