Life on a Finca

So some of you may wonder where we have been and if we are still alive or possibly thinking that we have been washed away with the rain! Well the answer is we were almost washed away with the rain. The day we left Malargue it poured with rain and continued for the next four days. Lucky for us on our ride to San Rafael we were able to check our emails and there were two unread messages. The first was from John and Annette saying we were more than welcome to their finca whenever we decided to turn up. Awesome, a warm dry place to spend some much needed time out of the rain we have grown to hate. The second message was from Wayne from Safari Tanks Australia agreeing to sponsor us a new petrol tank. It was great to get the help from an Australian company purely by chance, we both feel very lucky to get this help especially at this point in the trip when funds are dwindling and the bikes and gear is starting to feel the wear and tear of 3 years on the road.

So we turned up early afternoon on Finca Rita and were quickly welcomed and taken inside out of the terrible weather. It was cosy in the little farm house as we were not the only travellers who were seeking a place to stay out of the elements. Another couple from Australia Joe and Jen had been at the farm already for a few days and with the weather being so bad it made working on the farm difficult. Along with John and Annette it was a full house.

Finca Rita came about eight years ago. John and Annette had returned to the UK after an around the world motorcycle trip and not feeling comfortable with the idea of settling back into ‘society’ and having to work a nine to five job they decided to sell up and head back to Argentina. The idea of working the land and making a living from a small farm appealed to them much more. So with that Finca Rita was born, well the farm was an already existing farm that had an array of plums, grapes, walnuts, cherries, pears and apples. Their job was to renovate the home and increase the volume of the orchard.

So this is where we come in many years later. These guys take in fellow overland travellers and give you a place to sleep and food in exchange for about 6 hours of work a day, 5 days a week. We had decided to stay on the finca for a month while we waited for our new tank to arrive and some other spare parts. This was just what we needed so after the rain finally stopped we got to work. There were 2 main jobs to be done while we were here. The first job was to harvest the plums. Normally a very big job considering they have 2500 trees but last year in spring they were hit with a huge frost which meant they lost over 90% of their harvest. We still had a big job ahead of us but even though Joe and Jen had left another Australian couple had arrived, John and Alana. They have been to the finca a couple of times before and even left their bike here for the past 6 months after a visit back home.

I was surprised at how much I enjoyed to be back working, getting up each morning with more of a purpose instead of aimlessly travelling. The work was never hard and the hours were good. Start work around 9 and back for lunch about 12.30. Siesta in the afternoon and back to work for a couple of hours in the late afternoon before stopping for drinks at 7pm. I could get quite used to siesta. It was also good to have more variation to our normal diet. Annette did most of the cooking and a lot of the stuff came from their farm or surrounding farms. This along with local wines was a great reason to hang around which are also cheap and how could I forget the cheap Argentine Vodka! It was great with pomelo and at $3 per litre it became our drink of choice each evening. I did cook the odd meal, nothing to write home about but I did finally get to make my first woodfired pizzas from scratch and also some empanadas which turned out pretty good.

After a couple of weeks we finished the harvest of the plums which John and Annette keep and dry and sell them for a higher price than fresh especially this year since there are so little plums around. Our next job was to move the carport so there would be space for the guys to build themselves a new barn to dry and store their plums. This was an easy job also and with Aussie John on the level this was going to be better than the original by the time we had rebuilt it! This only took a few days and after finishing it John and Alana hit the road leaving just the 4 of us to get on with other odd jobs. I built a new stand for an outdoor sink, my first welding I have ever done after being taught by John which I was quite proud of.

We occasionally went into town to do some shopping but kept it to a minimum as we were trying to save as much as we could while we were staying on the farm. We also met up with some of John and Annette’s friends going out to picnics and also checking out some of the dams in the region. I had the opportunity to go trail riding with an American friend of theirs, Vincent who also has a finca down the road. He took me on one of the wildest trail rides I have ever been on, riding some of the most technical single trail I have ridden. This along with a stunning backdrop made for a great afternoons ride, even though at times I thought I might break the bike, it also didn’t help that we almost lost it off a 5 metre high ledge. The damage at the end of the day was one missing bolt, a slow leak in the front tyre from spines of cactus plants and a very tired me, nothing a few cold beers and some good cheap vodka couldn’t fix.

We had finally heard back about our spares and that they were sitting in Chile and there were some issues clearing the goods from customs so we decided we should hit the road. This was after 5 weeks, one of the longest breaks we have had since being on the road, but very much needed. I was starting to really feel the need to get back on the bike again and was keen to hit the road.

We had accommodation lined up in Chile on the coast just north of Santiago so it was now or never to get moving. We bid our farewells to John and Annette and thanked them for their hospitality. We hit the road with the sun shining bright and with a new enthusiasm for being back on the bike and with a liver that was in much need of a break from so much booze. 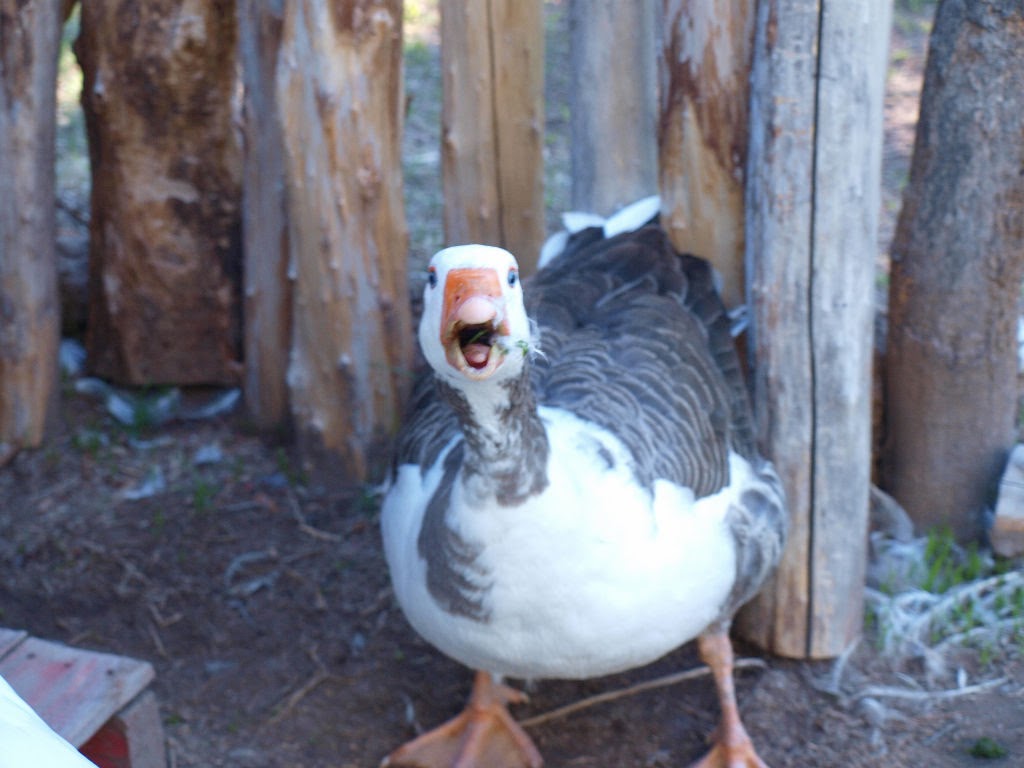 Trying to make friends with the geese was a failure 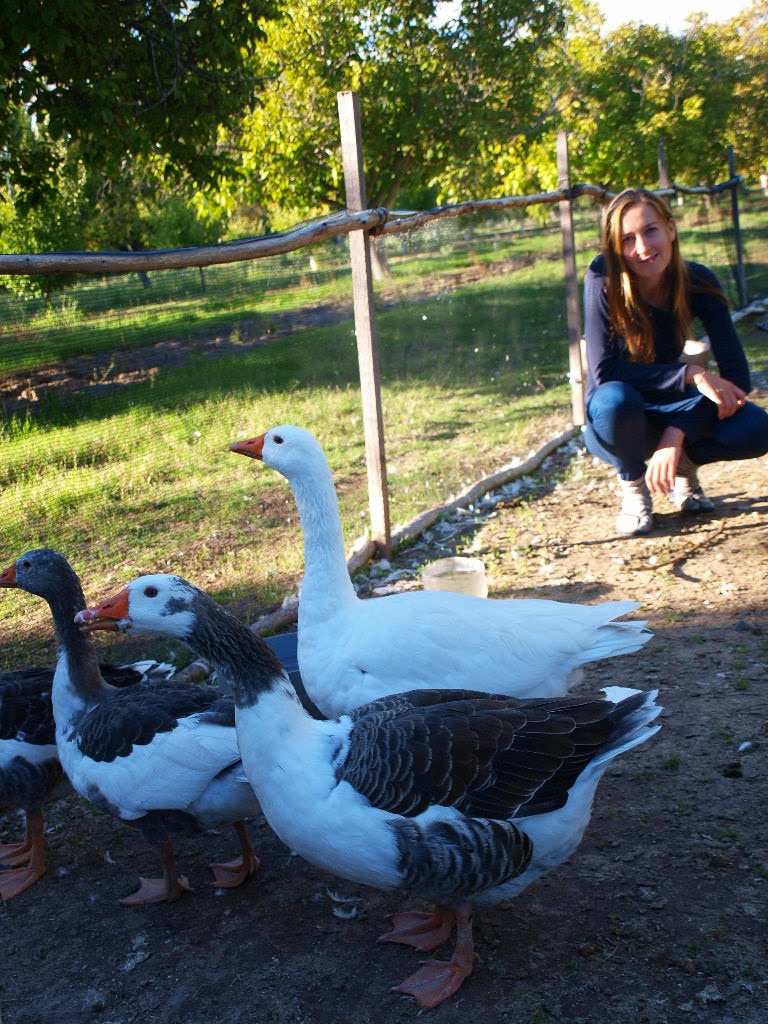 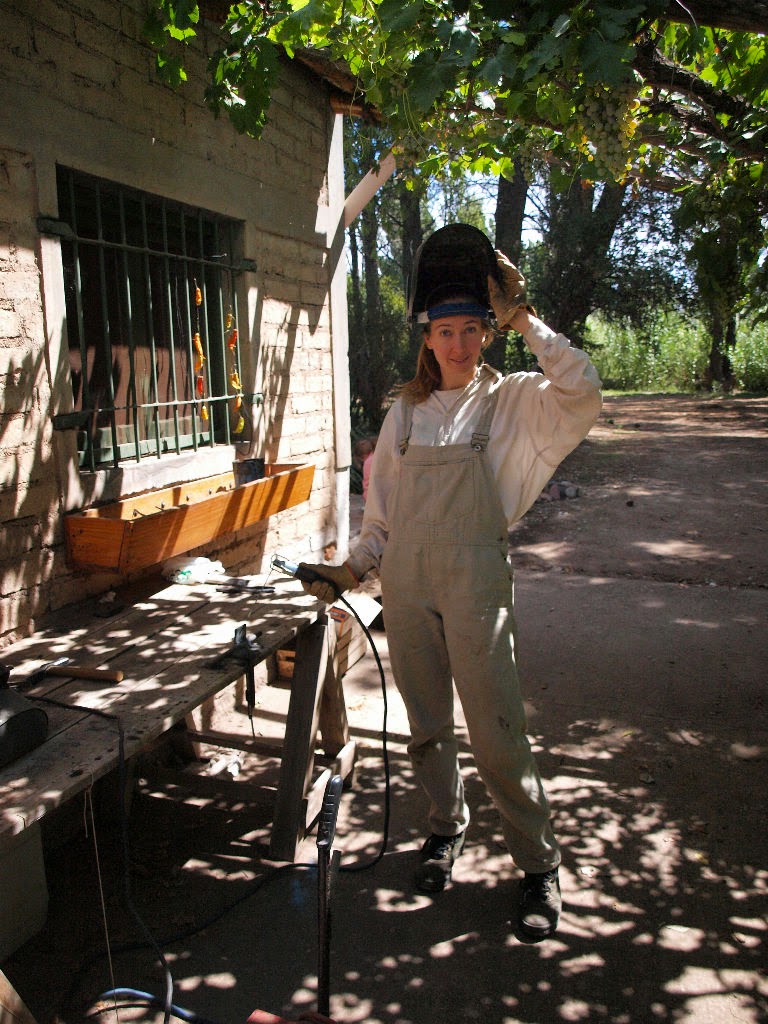 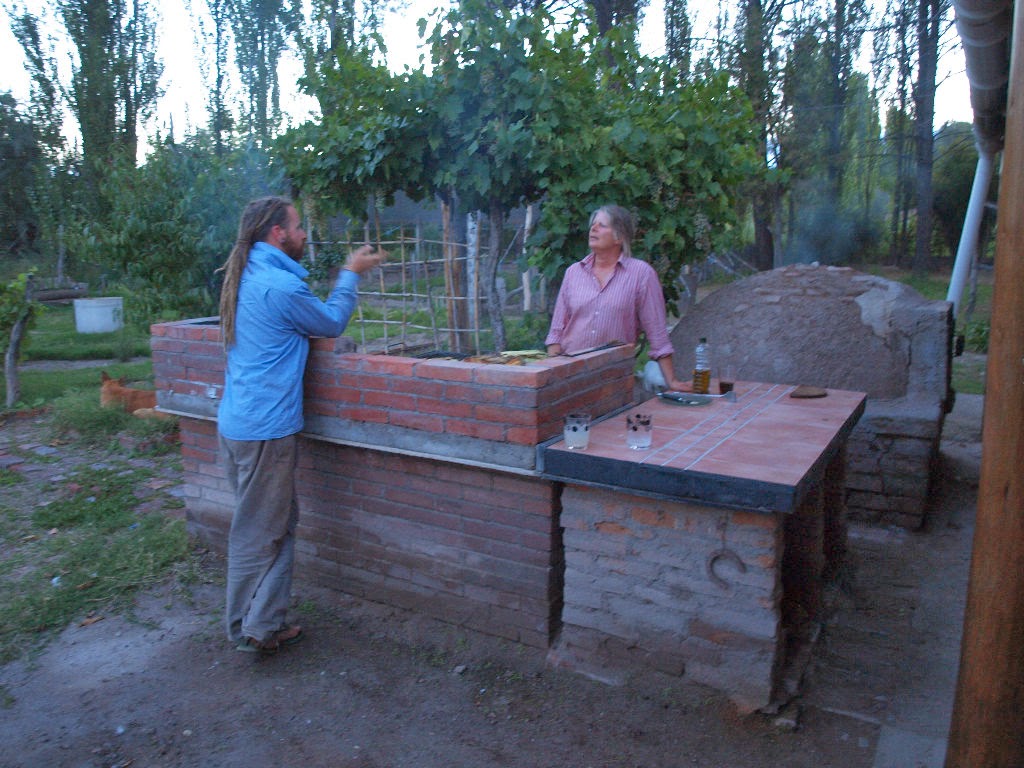 With my finished sink project 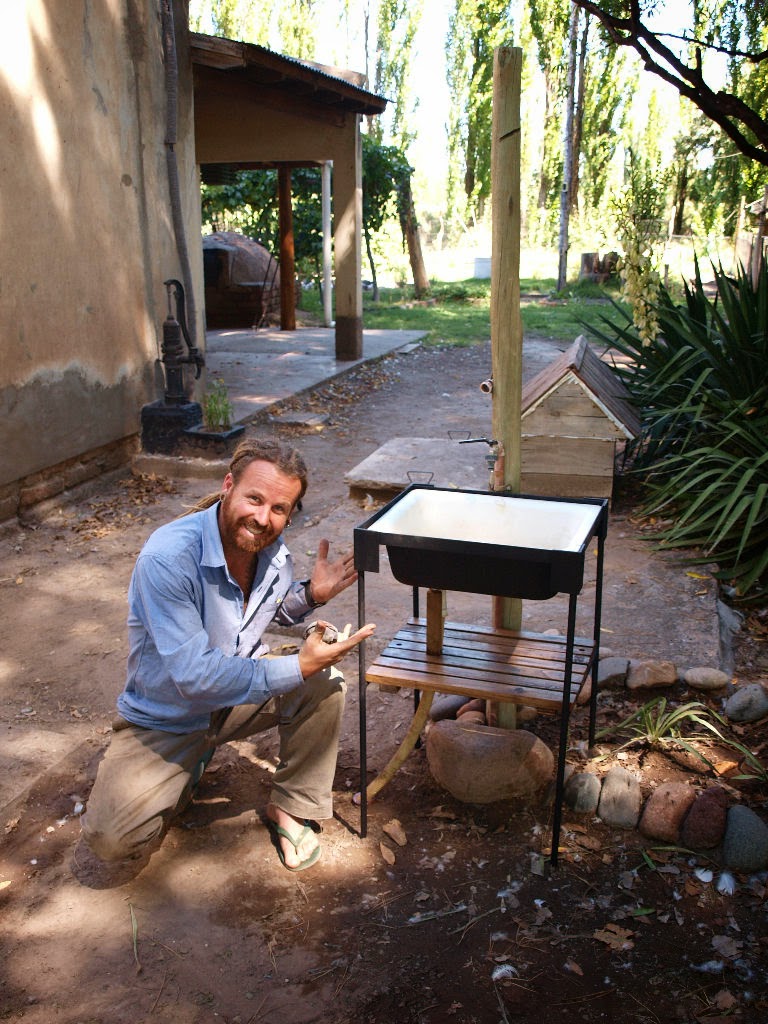 Me and the kitten we named "Chicken" 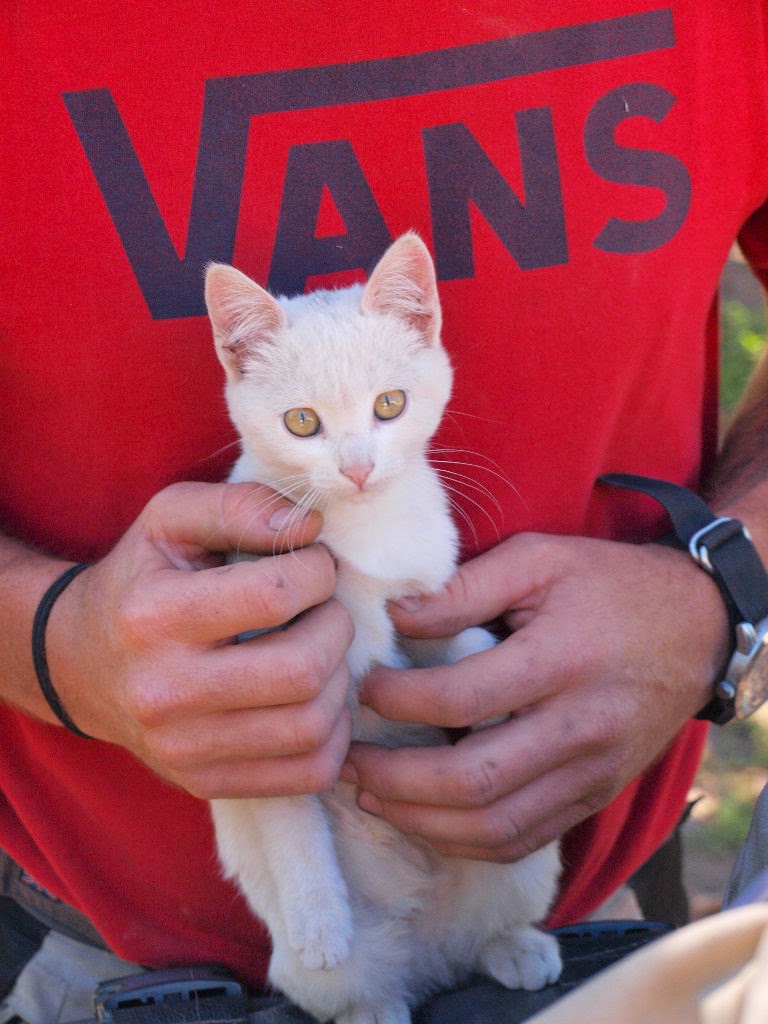 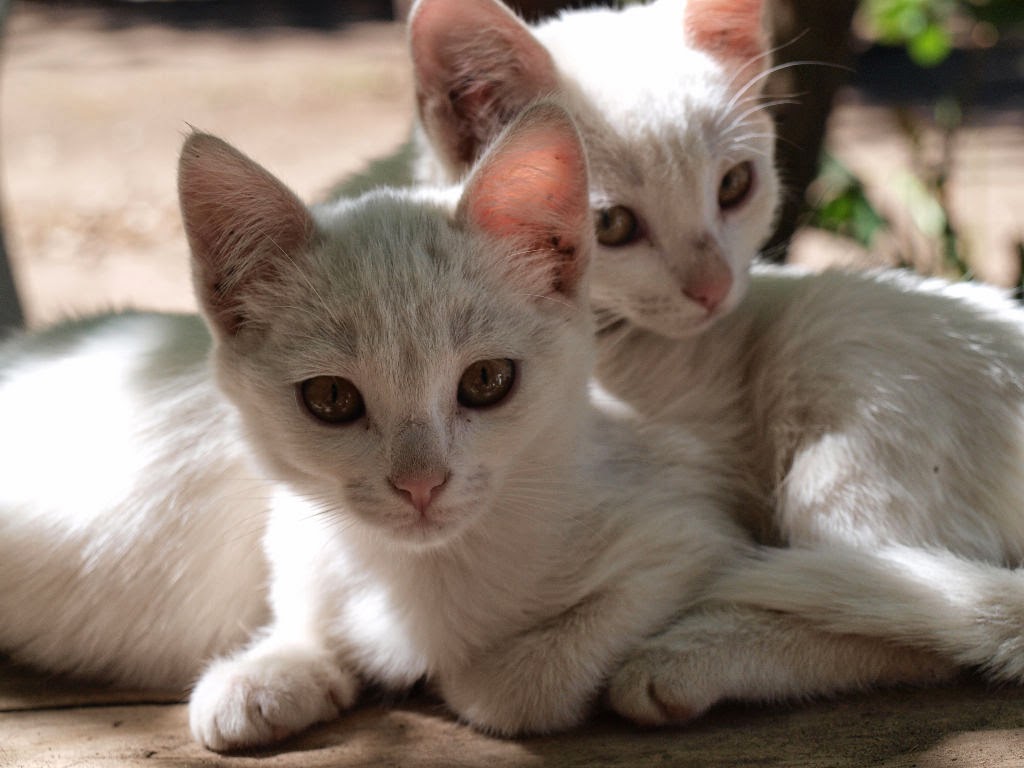 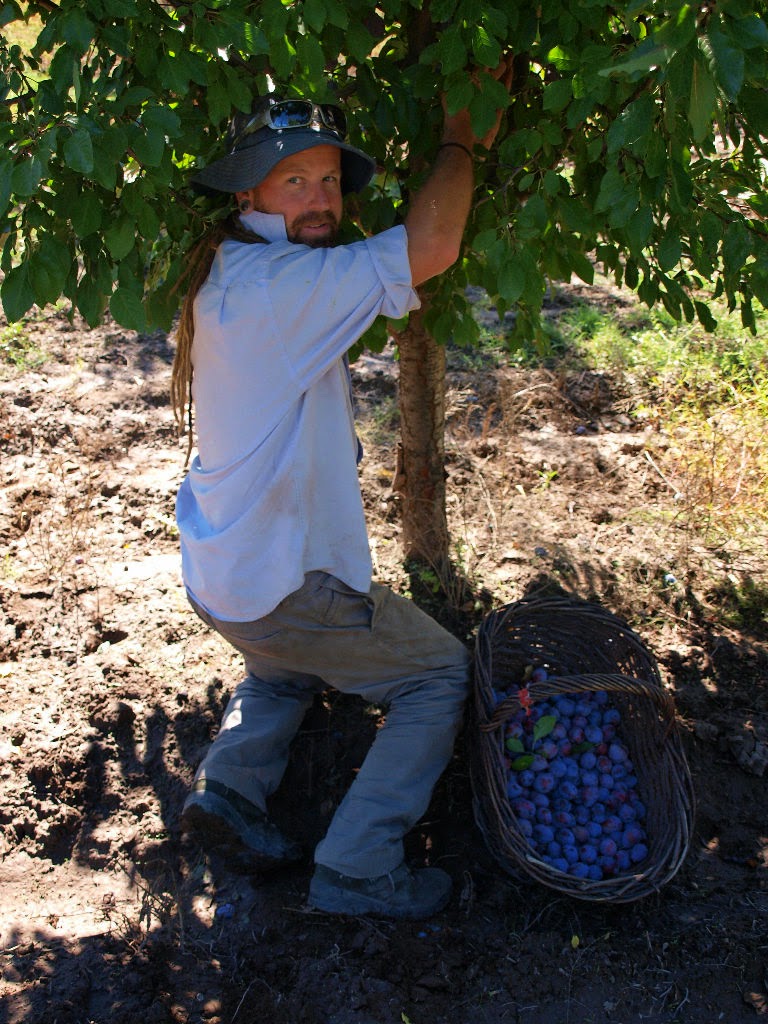 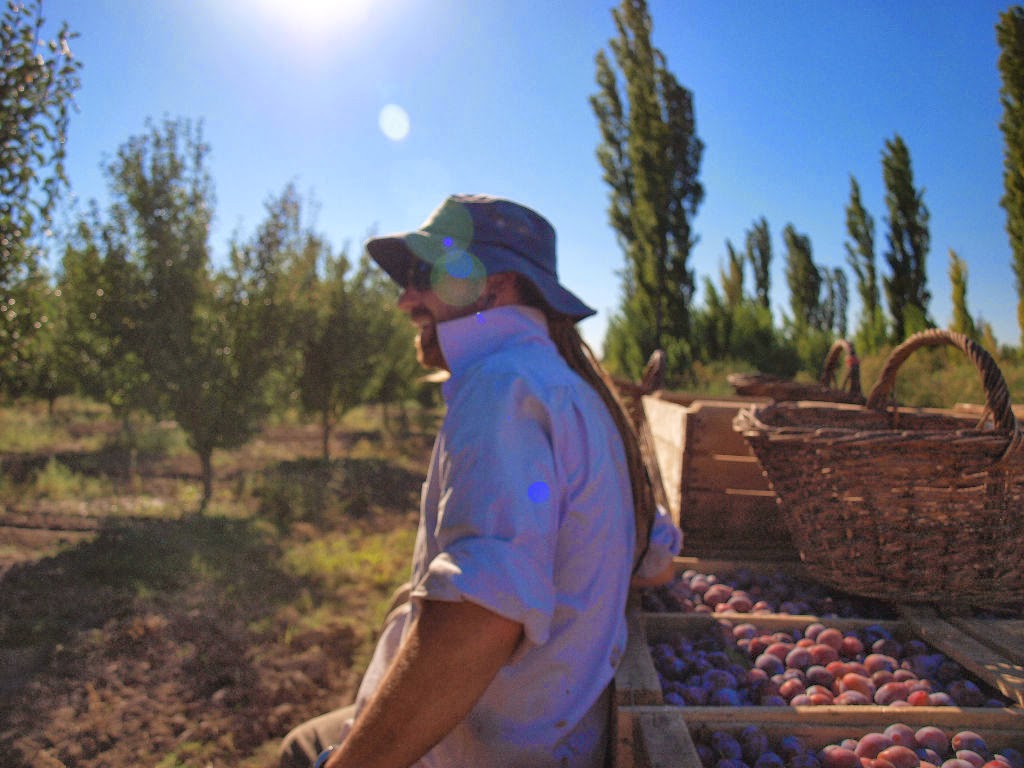 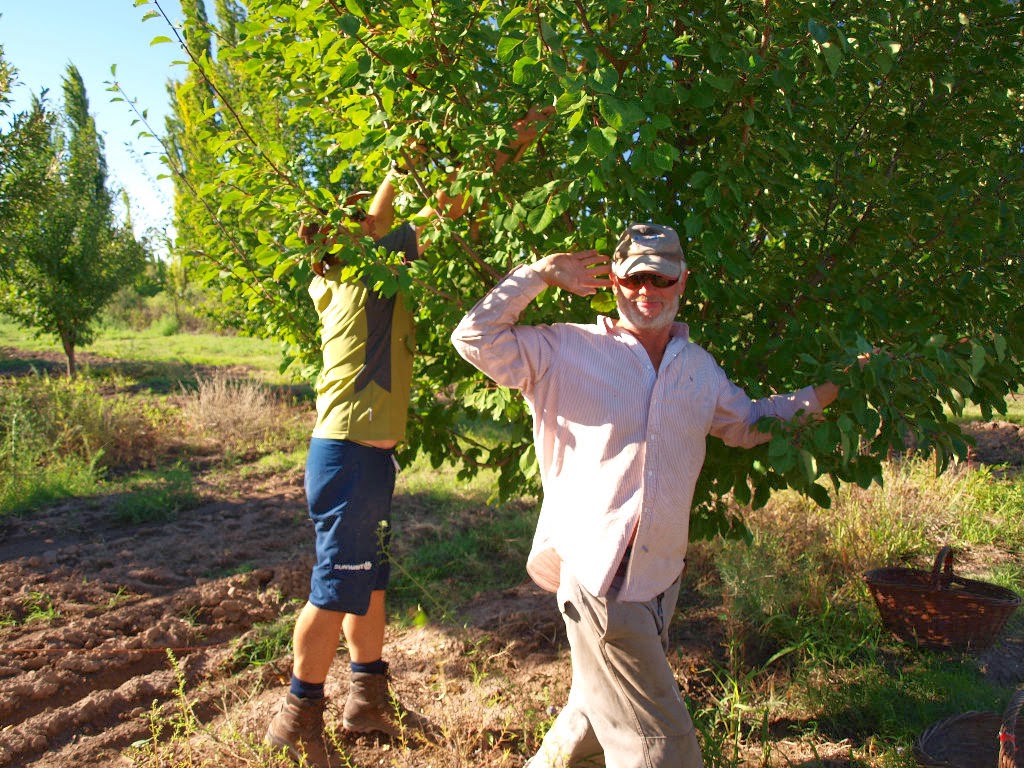 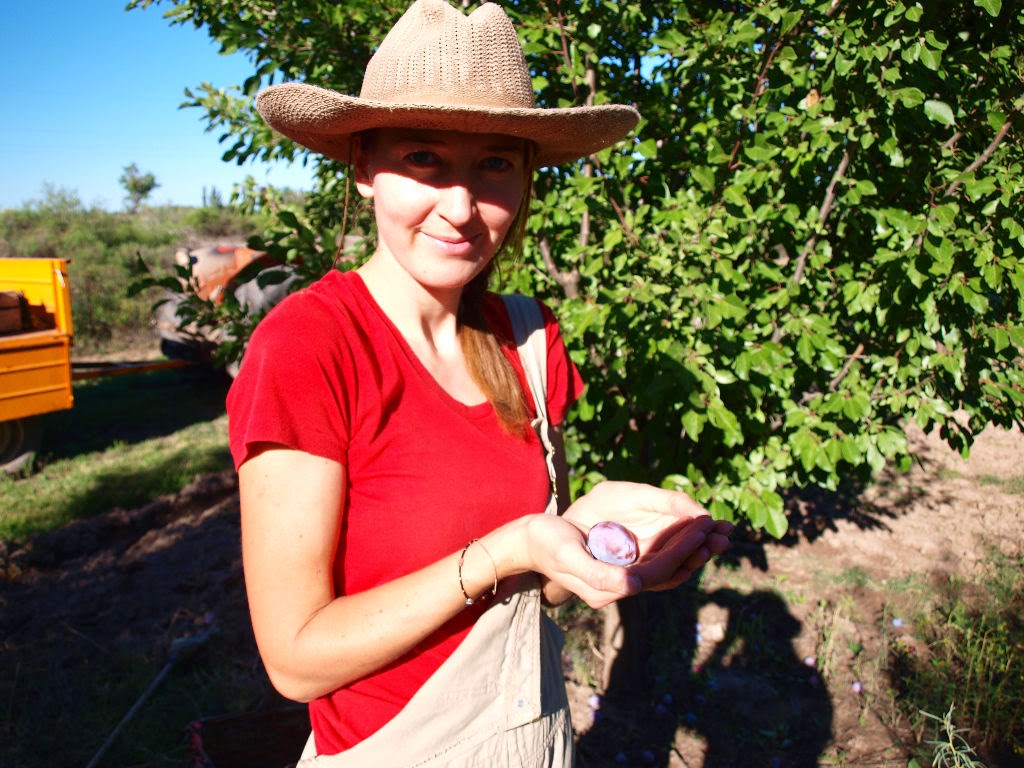 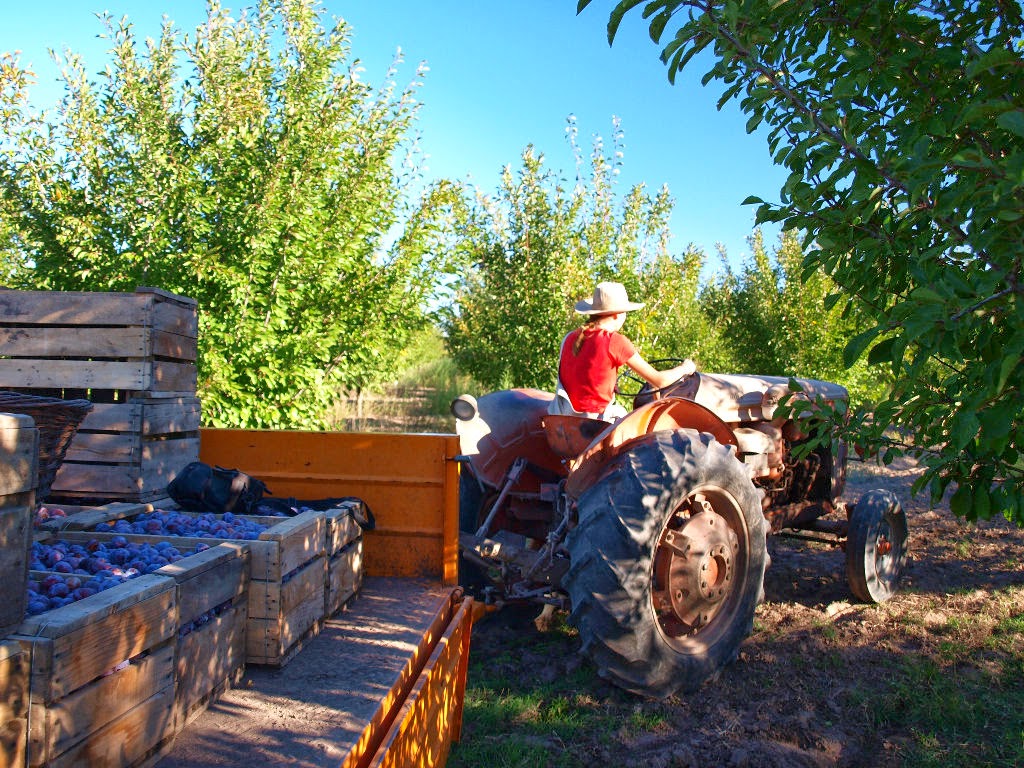 Plums on the drying rack 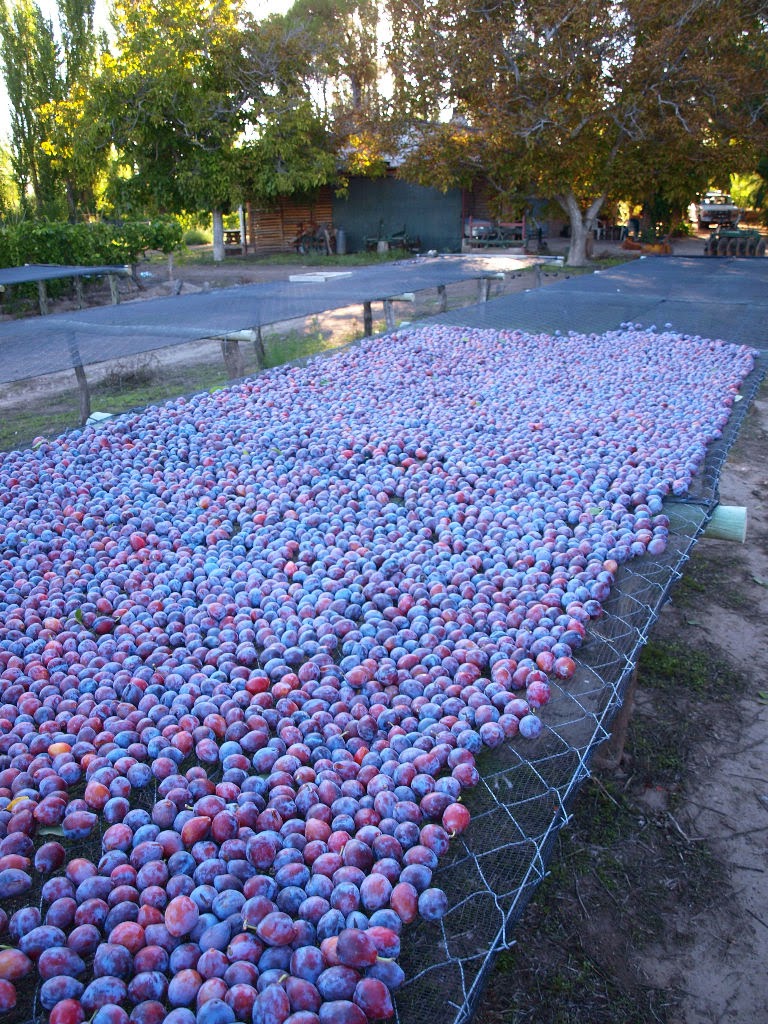 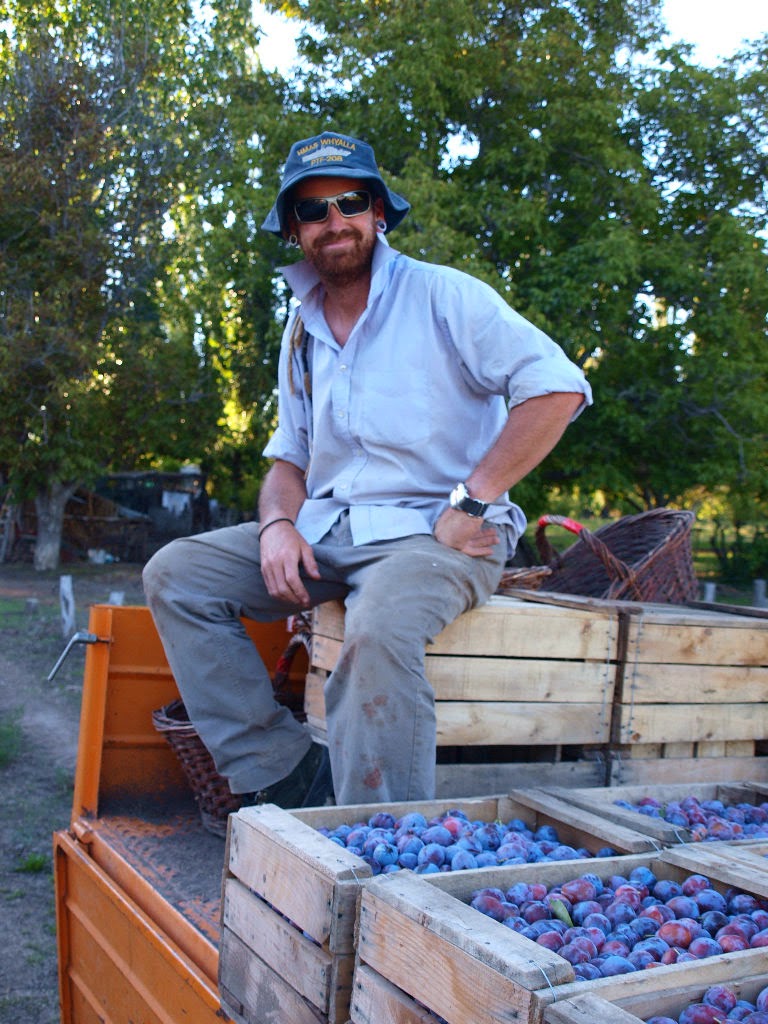 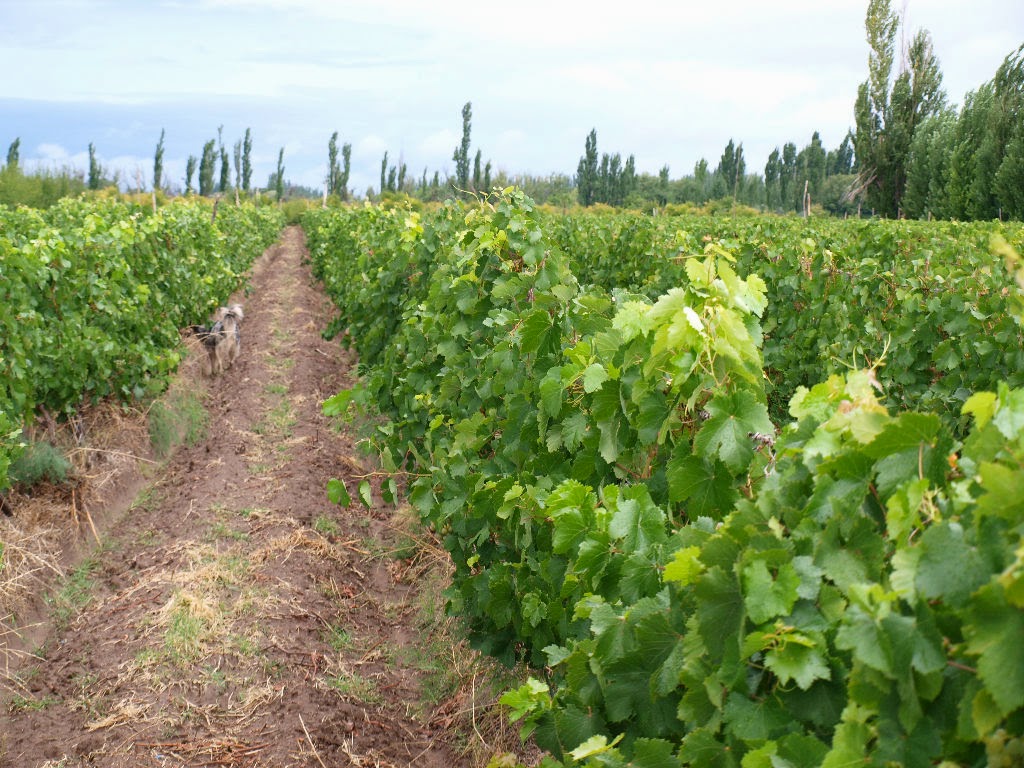 In the plum orchard 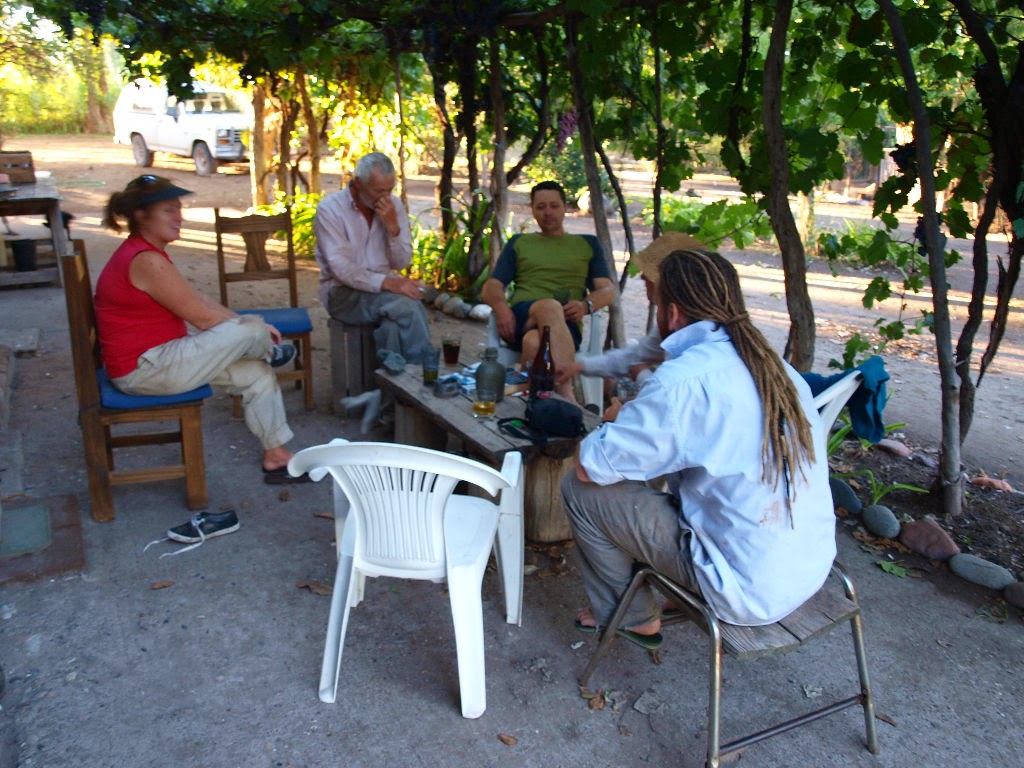 John and Alanna ready to hit the road again 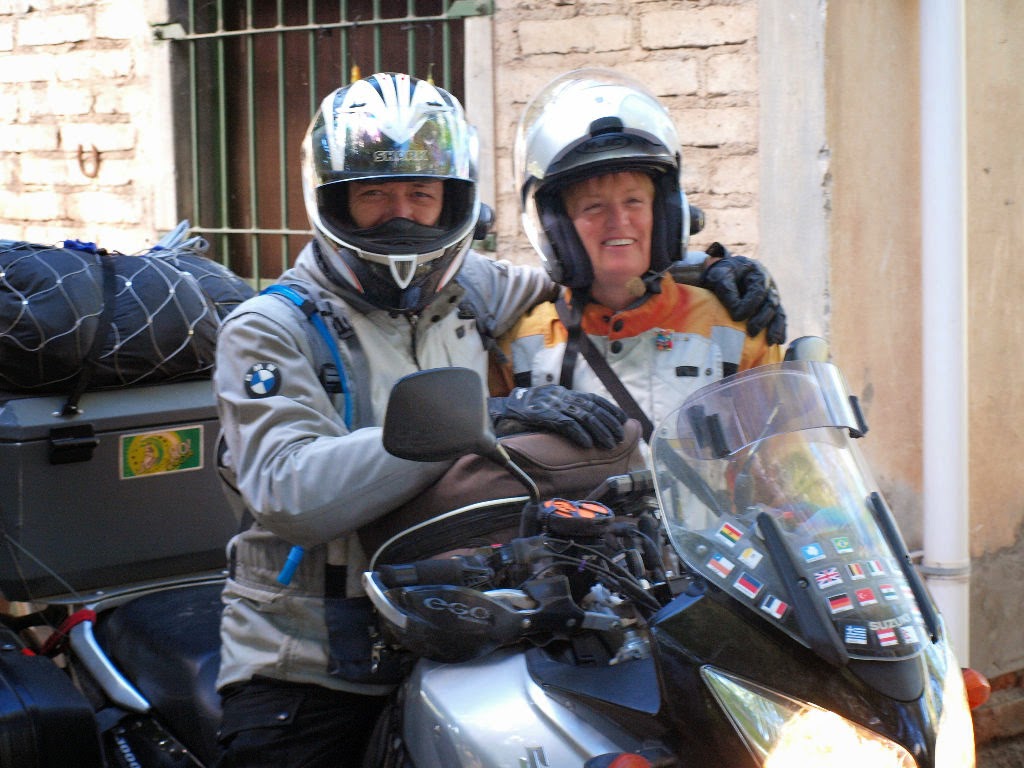 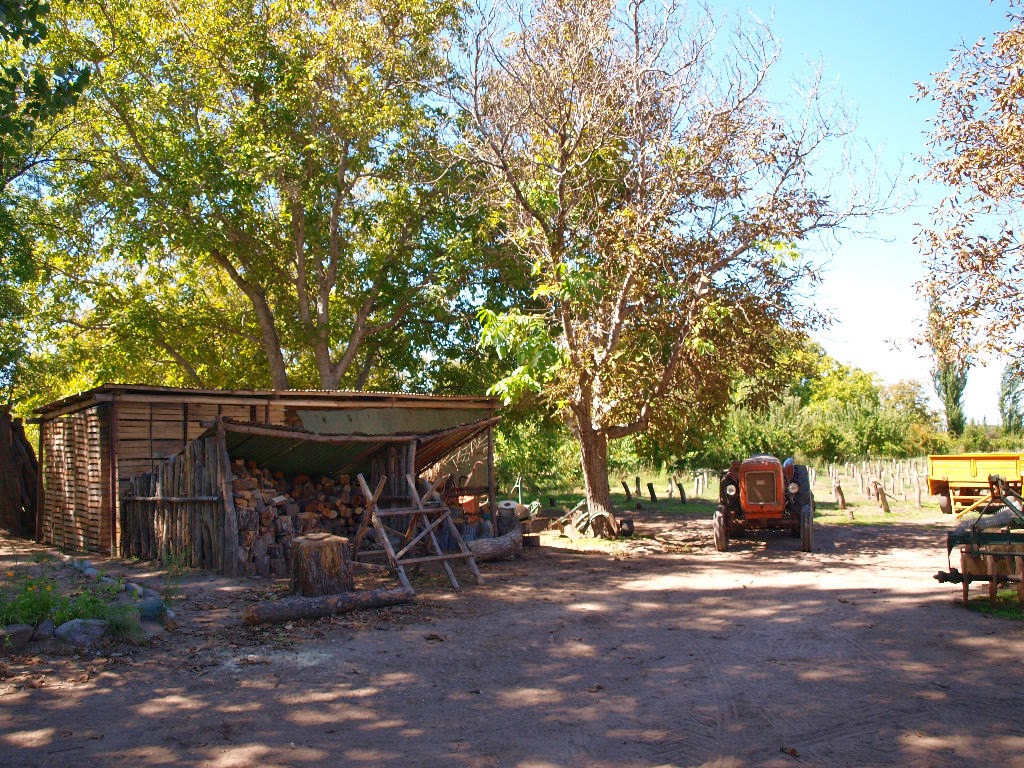