We had to leave early to catch the ferry to Sumbawa, all packed ready to go and running early for a change and then Sanne's bike decided it didn't want to start. After a bit of cursing from me, tried running through a few things to start it. It wasn't until a guy at the hotel came over to see what was happening and opened the throttle wide open and hit the start button,  after a few goes she spluttered back into life. With a quick thankyou we were off to the port. Our ferry looked a little better from our last one but we only just got there in time before there was no space left at all. The journey was uneventful, apart from a local guy showing me porn on his phone, and took just 7 1/2 hours on a calm ocean. We arrived in the afternoon into the port town of Sape and after talking to a few guys on the ferry we had a place organised to stay that night. Our host was very helpful even digging up a map for us as we had nothing, not knowing where we were going except that we needed to head west.
We hit the road early the next morning aiming for the city of Dompu about a couple of hundred km's away. The roads are reasonable here and happy to find not so many mountain passes winding tightly up and down. The scenery here is not all that different to the other islands but nothing really stood out here for us except the people who have been nothing but welcoming and helpful to us all along the way. We even got another police escort to show us to a hotel, and our cheapest yet at 55000Rp (about $6) per night! The following day we wanted to go get to the city of Sumbawa Besar, this proved a little more challenging with the roads in a poor state and getting stuck in a traffic jam didn't help either. No order here, just go for it when you can see a gap. We arrived early with a plan to leave early the following morning to the port town of Porto Tano as we did not know the timetable of the ferries to Lombok. We could not have timed it better as we hit the port at 10.30am and our ferry was leaving at 11.00! Onto island number four and our shortest crossing to date.
The ferry from Flores - Sumbawa 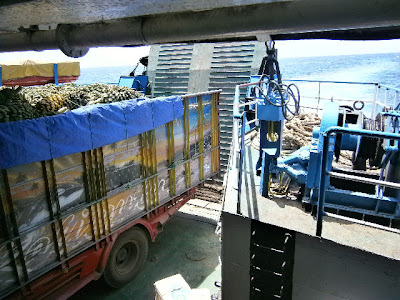 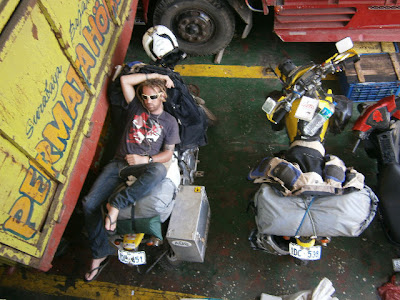 Menacing clouds greeted us in Sumbawa 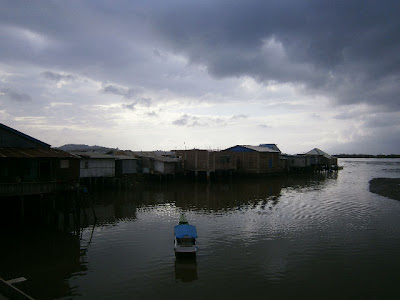 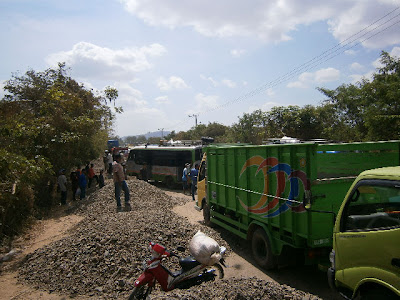 All over Sumbawa you see these little ponies pulling carts around, some are nothing more than skin and bones but still forced to pull heavy bricks and whole families around 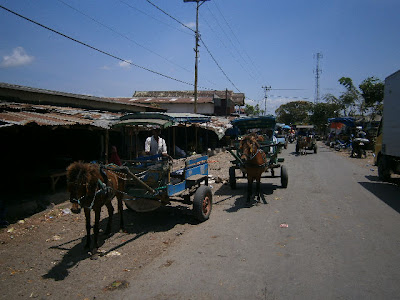 Lots of monkeys by the road side, some not so friendly
as Mark found out when one chased him down the road! 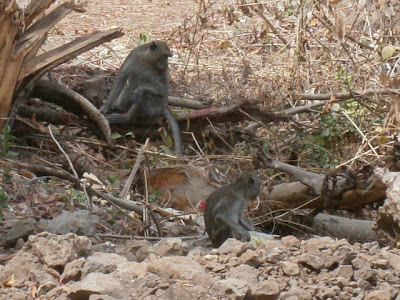