When Mark and I were camphosts for a month back in Exmouth, Australia, we met a plethora of French backpackers. And...they didn't give us the best impression of French people to be perfectly honest. So we didn't know what to expect of France and Frenchmen seing as neither of us had ever been to France before, but there is always the myth of French being arrogant.

Well, I am happy to be able to say that we have met nothing but nice and friendly people here. Yes, it's true that they really don't speak much English (if any at all) but we've found that if you approach them with a: "Pardon monsieur/madame, parlez vous Anglais?" they are more than happy to help you. If they don't speak English, a few of them speak German which on one side is good but also puts me on the spot stumbling my way through sentences with my school German which I have discovered is insanely bad! But somehow we manage to understand each other.

Our first stop on the French Riviera after crossing the border from Italy was no other than Monte Carlo, Monaco. Well, it's flash to say the least. We drove around the city with our dusty Suzukis while Ferraris and Lamborghinis surrounded us. Young kids driving around in daddy's Merc, the harbour full of luxury yachts so big that I would call them ferries and millionaires fangin' around on jetskis. Oh yes, this was definitely a look into how the other half lives! And then there was Mark and I walking around in our dirty, smelly motorcycle gear totally not fitting in. How I really wanted to be on one of those yachts... We had had a plan to find a couchsurfing host in Monaco but the only one we could really find was an older guy who in his profile wrote that he was really only interested in hosting women, had posted as his goal: "To find the woman in my life" and under nationality wrote: Italian, no muslim. So a womanizing racist then. So we abandoned the hope to get invited onto a boat and instead just had to bitterly watch the rich have fun.

We left Monaco and followed the riviera which took us through Nice which was nice but touristy and was really just one long beach promenade. Cannes was nicer with some really nice architecture but very busy and the traffic moving at snails pace. This was the most annoying thing about the riviera (and was the same for the Italian riviera), the constant stopping and starting for pedestrian crossings (we're definitely not in Asia anymore where pedestrians usually have to jump for their lives) and we got nowhere in a hurry. I came to the conclusion that the best place to be on the French Riviera is on a boat - luxury yacht preferably.

As the afternoon wore on we started to think about there to camp for the night. Never imagining that we would be able to find a place to camp on the coast we were going to head a bit inland to find a bit of bush or somewhere suitably "bushy" where we could put up our tent. But in between Cannes and St Tropez we stumbled upon a piece of land with an abandoned, burned down house on it, perched right on a cliff over-looking the mediterranean. Score! This has got to be one of the best locations we have camped on the trip. This land would have had to be worth millions of dollars and there it was totally abandoned. The next morning we woke up to a beautiful sunrise over the Med and then went for a swim just 100 metres down the road in a little sheltered cove. I felt kind of hesitant to leave this place but move on we had to...

St Tropez was a bit of a let down. I had expected something more somehow. The town itself is nice enough, full of Prada, Versace, Dior shops etc, you name it, they were all there. But the beaches are totally ordinary. Maybe we went to the wrong beaches I don't know but I really couldn't imagine any celebs sunning themselves on any of those strecthes of sand. Oh but that's right, they're all out on the boats...those goddamn boats!

The next few nights we camped at less spectacular but not neccesarily bad spots a bit off the coast where it is usually easier to find a place hidden in the bush to set up camp. Still upholding our great tradition not to pay for accommodation which had been great for our wallets but not so great for our personal hygiene... These days a wash for us is a wipe over with some Johnsons baby wipes. Mark is lucky when it comes to his hair as you can't tell if it hasn't been washed in a while but mine looks a mess. Greasy mop hair seems to best describe it. But no one said this trip was gonna be a fashion parade.

As for my bike, well it's not running too well. It's the carburettor, possibly a fuel starvation issue. We're looking into it. 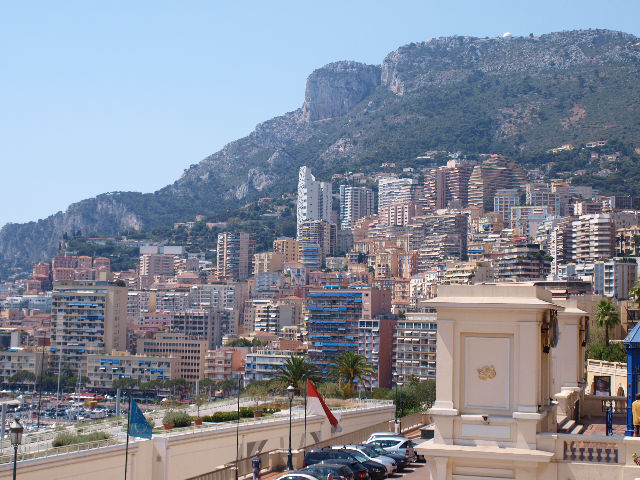 Mark in Monaco...never was there an odder couple 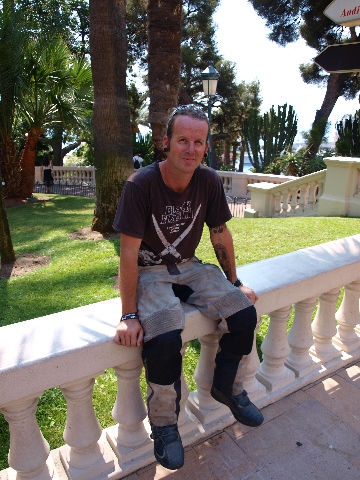 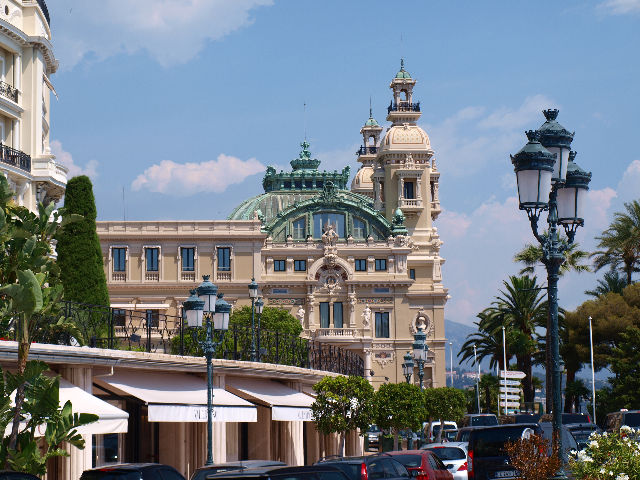 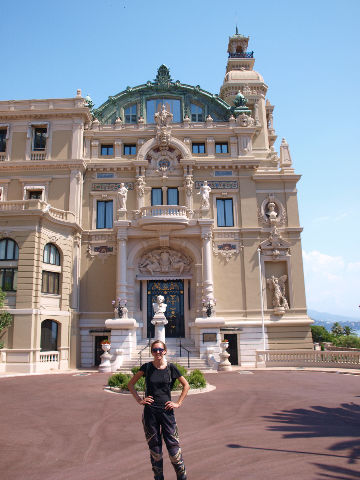 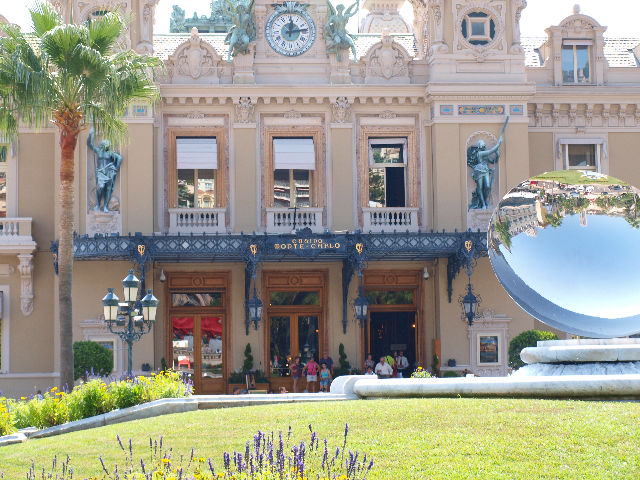 Where we really wanted to be... 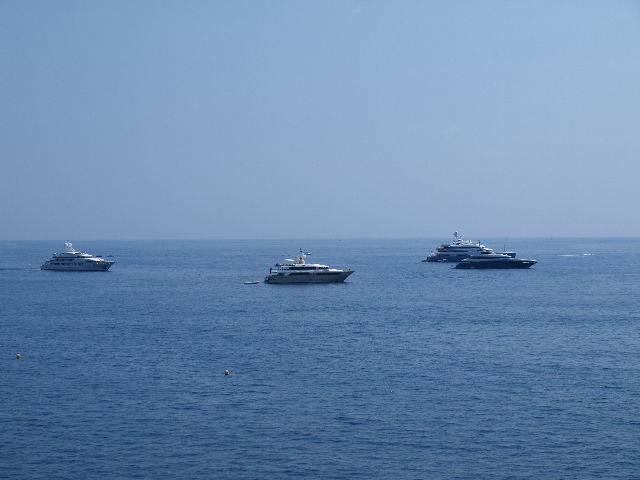 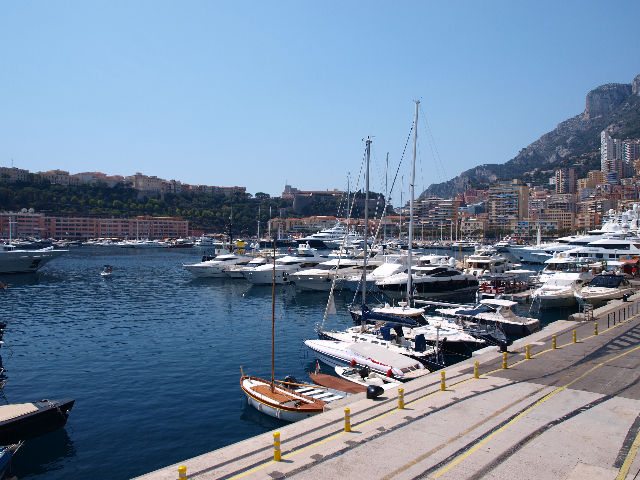 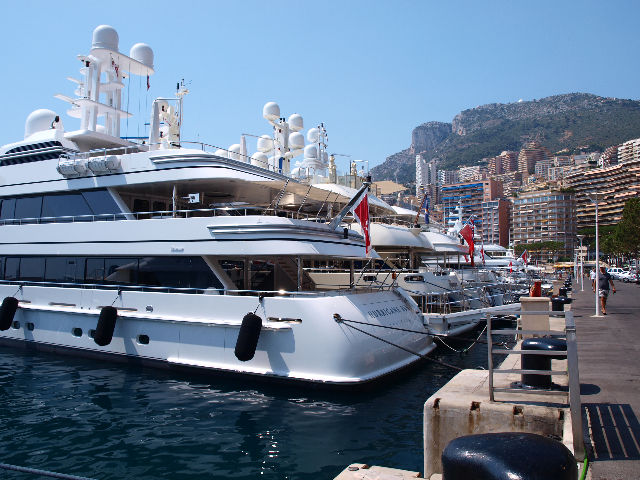 They even have a garage for smaller boats in the boat! 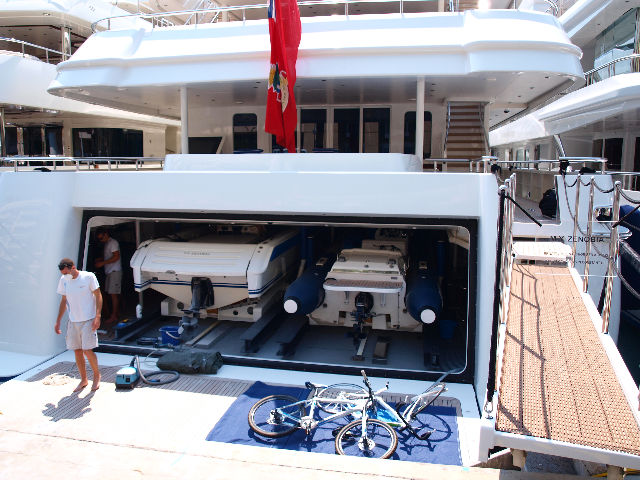 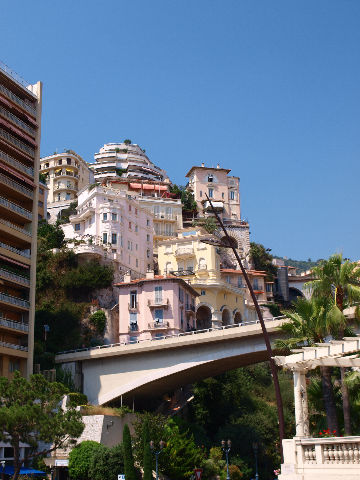 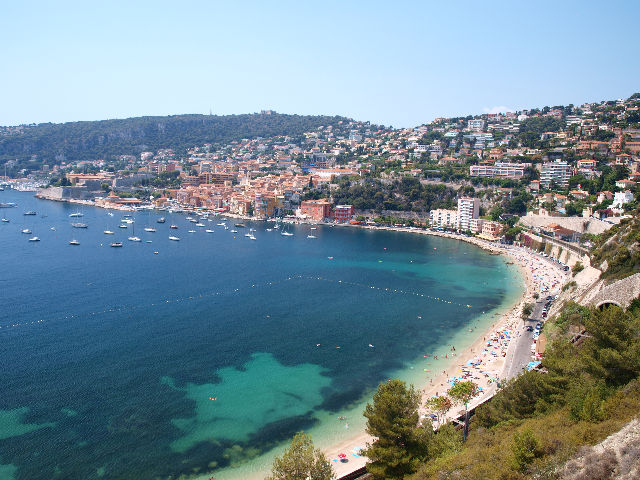 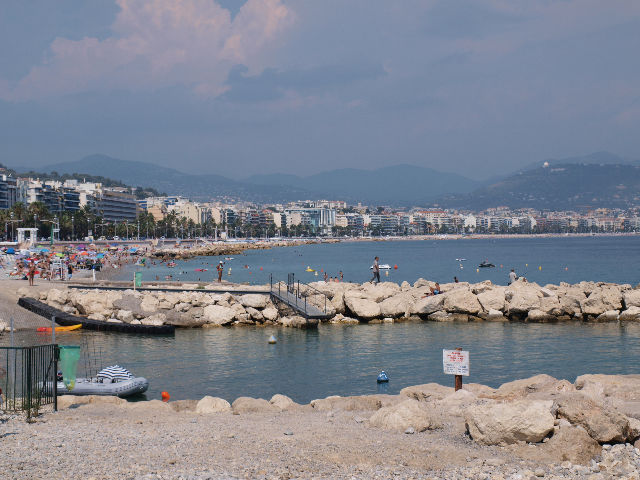 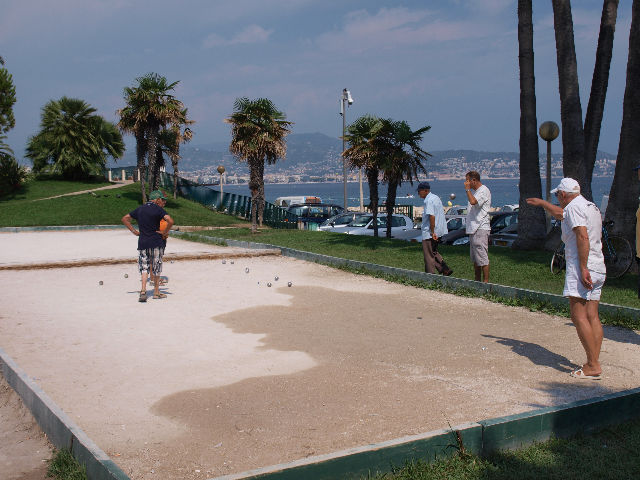 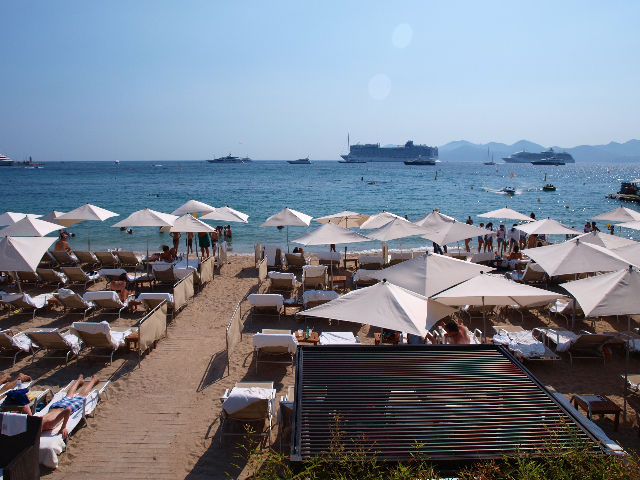 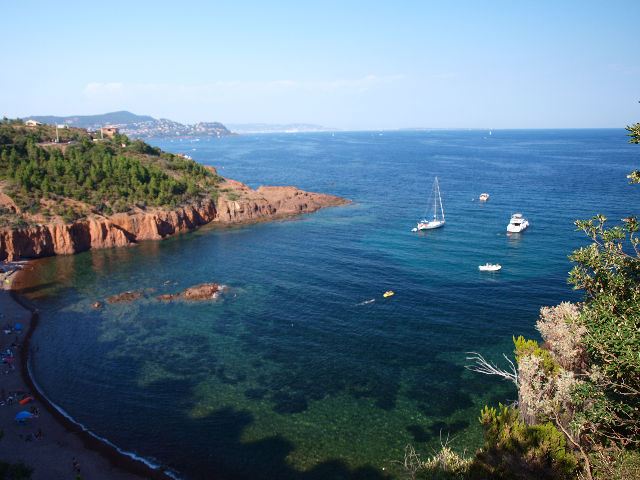 The red cliffs reminded me of Northwest WA 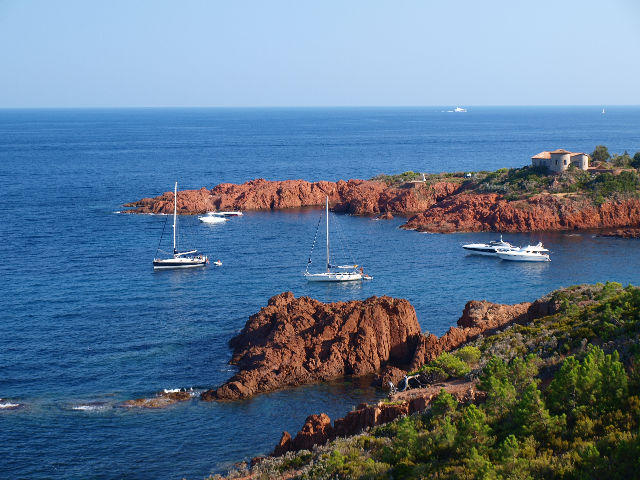 Ahh to have a house here... 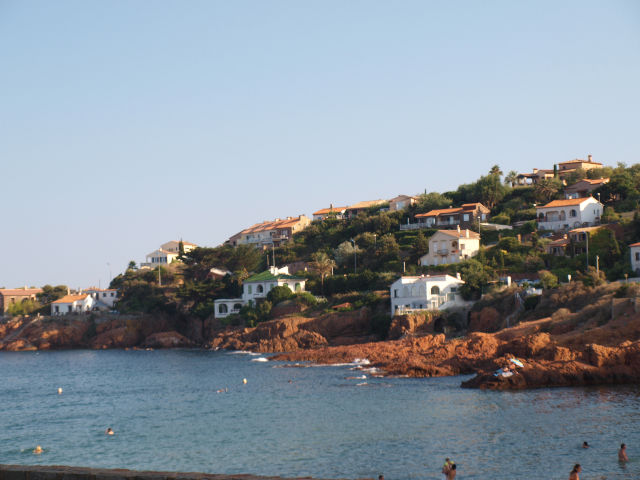 Our little plot of land where we camped 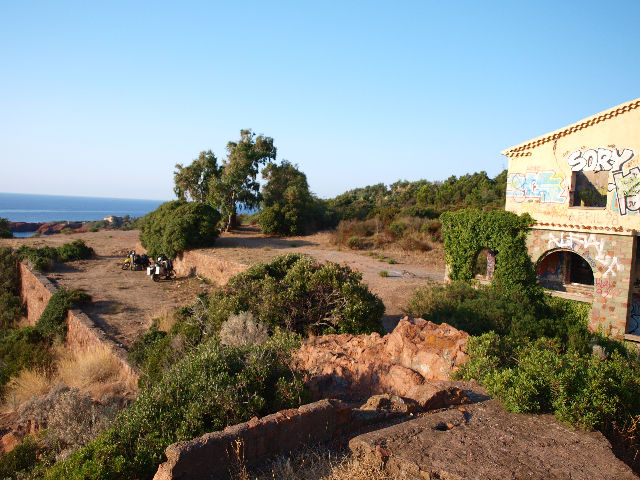 Inside the burnt down house 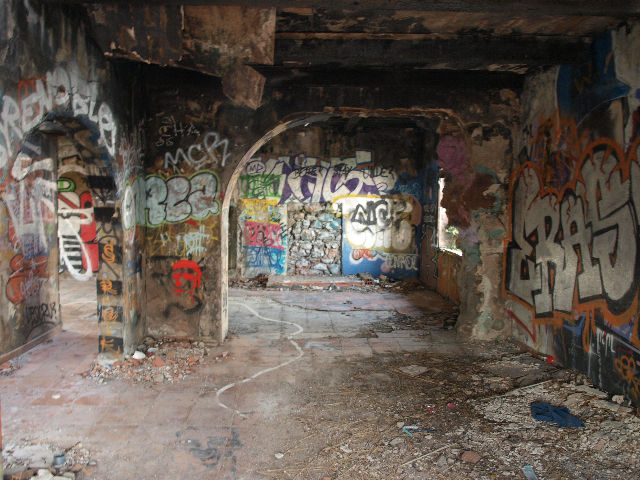 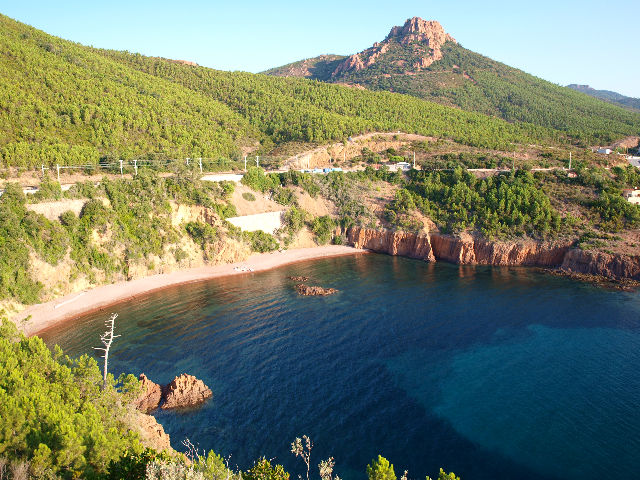 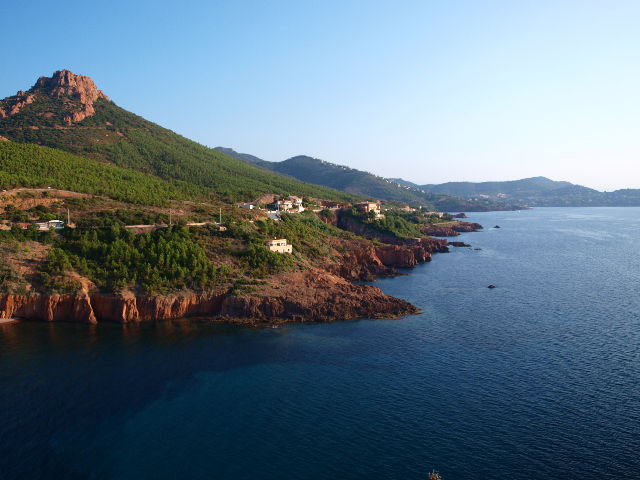 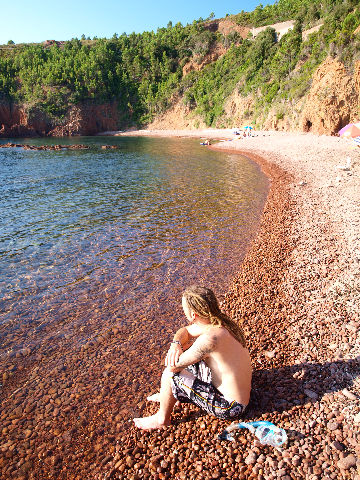 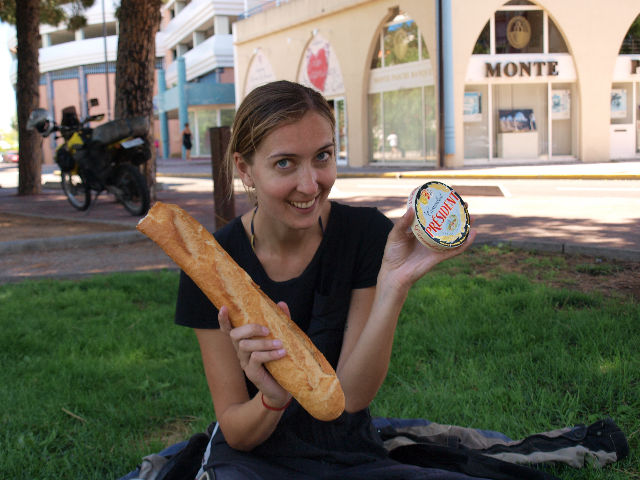 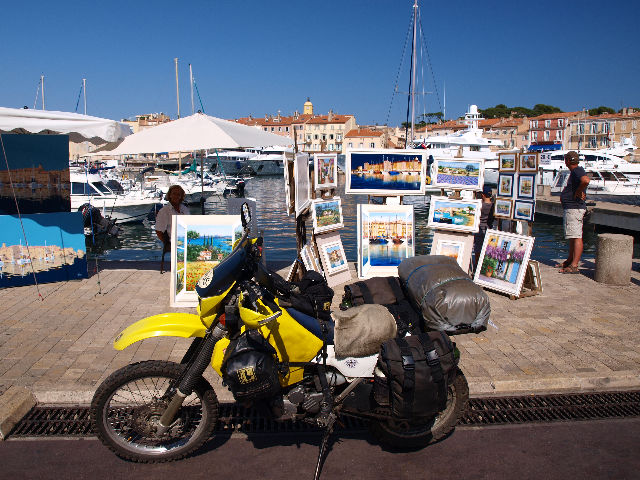 Back in the bush where we belong! 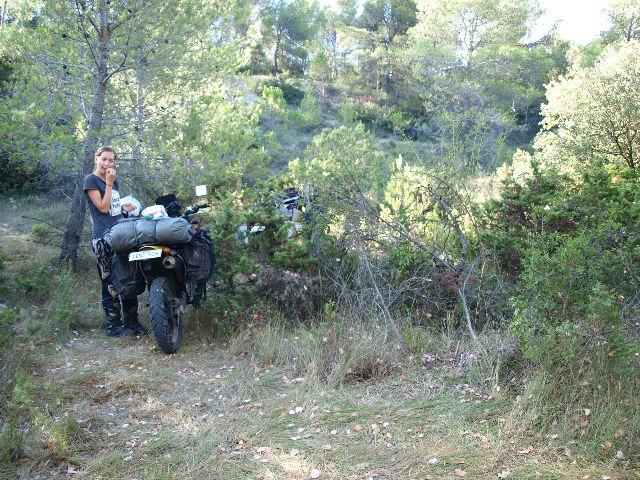