Left our campsite by the river somewhat reluctantly, but we had to press on as we are only able to carry enough food to last us about a week. Today's ride took us up to a plateau of some mountain ranges where we stopped to take it all in. The scenery here is incredibly varied so each new day brings something new.
Stopped at Imintji Roadhouse to see what they had in the way of food - turns out not a whole lot! We ended up buying an onion and a loaf of frozen bread (it's all frozen here) that we later found out was 3 years old! It was surprisingly good. Moving on from here, the road was still in good condition but very dusty which you really get to experience when you're on a bike and you're being overtaken by a truck! Or any other vehicle for that matter. There are about 10 seconds when a vehicle overtakes you that you can not see anything. All you can do is keep the bike straight and hope for the best!
We stopped at a place with a sign saying Galvans Gorge. We had no idea what it was but mainly took it as an excuse to give our sore backsides a much needed break! We were walking down the track when a tourguide said: "I hope you've remembered your swimmers". Eh, no we hadn't, we didn't even know you could swim there but he insisted that it was worth it so we turned around and got our swimmers out. Well, was it worth it. Galvans Gorge is a beatuful little spot with a waterfall and a swimming hole. We jumped straight in and cooled ourselves down and spent a couple of hours there just basking around in the water and washed away the dust.
Made it to Mt Barnett Roadhouse which is pretty much the halfway point of the Gibb River Road. Down a little track from the roadhouse was the Manning Gorge where we set up camp. Overpriced and overcrowded we found ourselves longing for the serenity of Dog Chain Creek. Met a nice couple making their way around Oz who invited us over for beers and damper, so a nice end to the day at least.
Mark at one of the passes overlooking the ranges 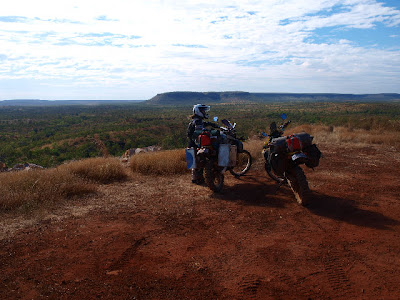 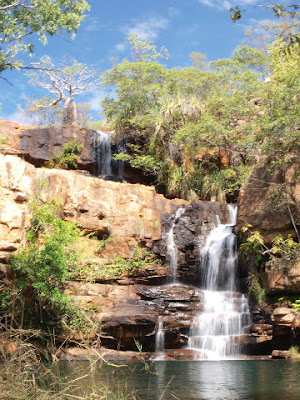 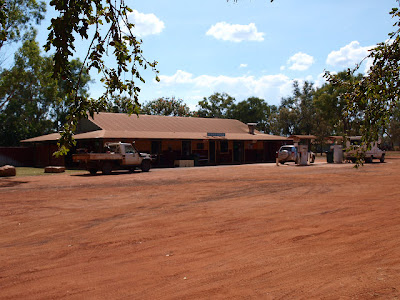 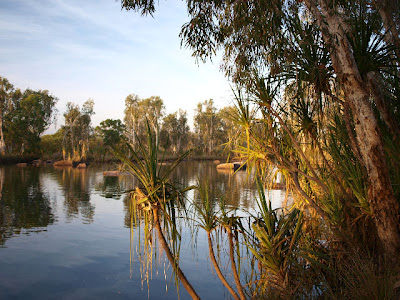 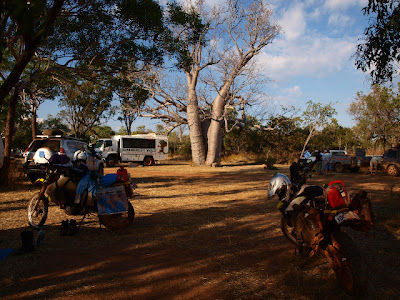 The falls at Manning Gorge 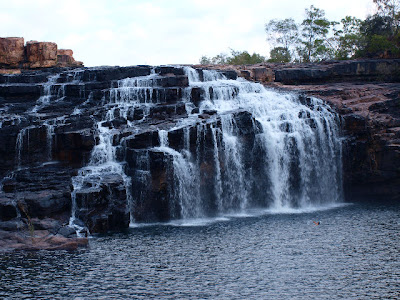