Mr Muchsin brought us to a meeting at the Department of Education one day where he introduced us to the principal of the local international school. International doesn't really mean there are many different nationalities here, it just means that certain subjects like maths and science is taught in English. The principal was very excited to meet us and asked if we would like to visit her school and meet the students. We said yes and next thing we knew we were following Mr Muchsin's scooter to the school. There we were greeted by a young woman who was an English teacher at the school (her name escapes me). She was very happy to have us there as the school doesn't get many (if any) international visitors. She first took us to a class room of 12-13 year old kids and we quickly found ourselves in a most familiar situation - being bombarded with questions. They asked pretty much the same as the kids from Muchsin's classes. Like, how old are you, what's your hobbies, that kind of stuff. They obviously found it difficult to understand that 1. we don't have a religion and 2. that we're not married and not planning to. For them it just seems inconceivable as both of those things are very important in their culture. Many of them were also impressed that as a woman I was riding my own bike on this trip, with one girl exclaiming: "I think you are like wonder woman"!
After we had spent a bit of time in that class the teacher took us to the cafeteria for tea break. By this stage the news that we were there had spread like wildfire, and kids were streaming out of the class rooms to take a peek at 'The Foreigners'. While sitting chatting with the teachers at the cafeteria loads of kids came over to say hi to us and ask us questions and take photos and to beg the teacher that we please come to their class next. After the break they split us up so we could cover more classes as everyone from the teachers to the kids were wanting a piece of us!
We talked so much that day, had so many photos taken of us and even signed autographs (!) that by the time we left 4 hours later we were absolutely knackered. It was a really good experience though, one we'll remember for a long time.


Us with our young audience 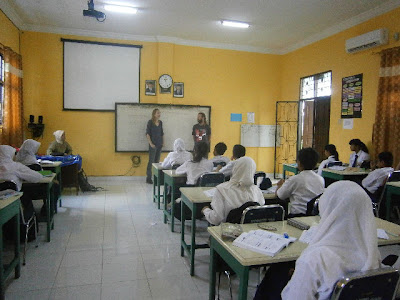 Us with two of the teachers 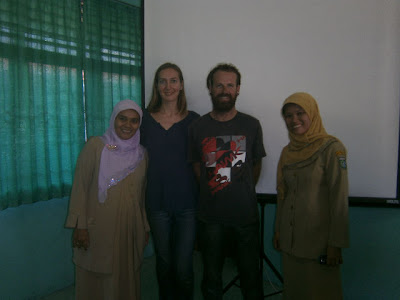 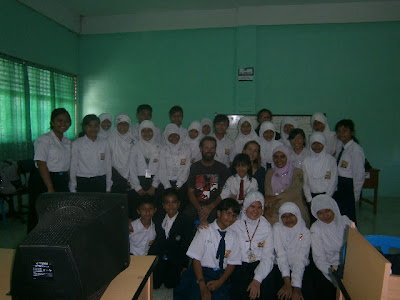 A sweet little thing who latched on to us and followed us around throughout the day
(until we were about to leave and she started hitting Mark!) 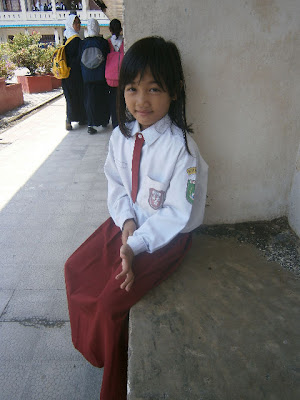 Mark and his ever-increasing fanclub of teenage girls! 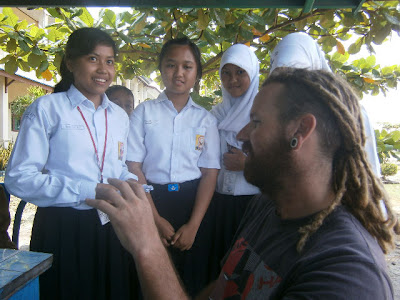 And just one more group photo because you can never have enough! 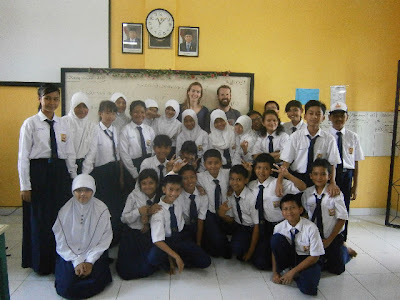